Summer nights in Florida very hot by design. And if you find yourself in a huge amphitheater, surrounded by thousands of adrenaline-imbued music fans, the sensation of heat rises several degrees and you can feel the electricity sparking in the air. And that exactly was the atmosphere this past Sunday when KoЯn, Alice In Chains and Underøath assaulted the grounds of the beautiful Coral Sky Amphitheatre, in the South Floridian county of West Palm Beach.

Underøath was actually the second band to hit the stage that afternoon – I missed the first act due to the jammed traffic. They came out with a truly spectacular level of intensity, pouncing around like caged animals trying to escape from their captors. Front-man Chamberlain whipped his hair in every direction, bellowing into the mic and dropping to his knees at the front of the stage, meanwhile his band-mates moved incessantly, fiercely spinning guitars and basses around their bodies. Keyboardist Chris Dudley banged his head in time with the drums while he was twisting knobs and pushing keys, a true sight to behold as keyboardist are usually for the most part a “static element” in virtually every band’s landscape. Tantalizing amounts of energy and sweat radiated throughout the space, and the band definitely harnessed the crowd’s response in their performance, as part of a set which flew by in a blink of an eye. 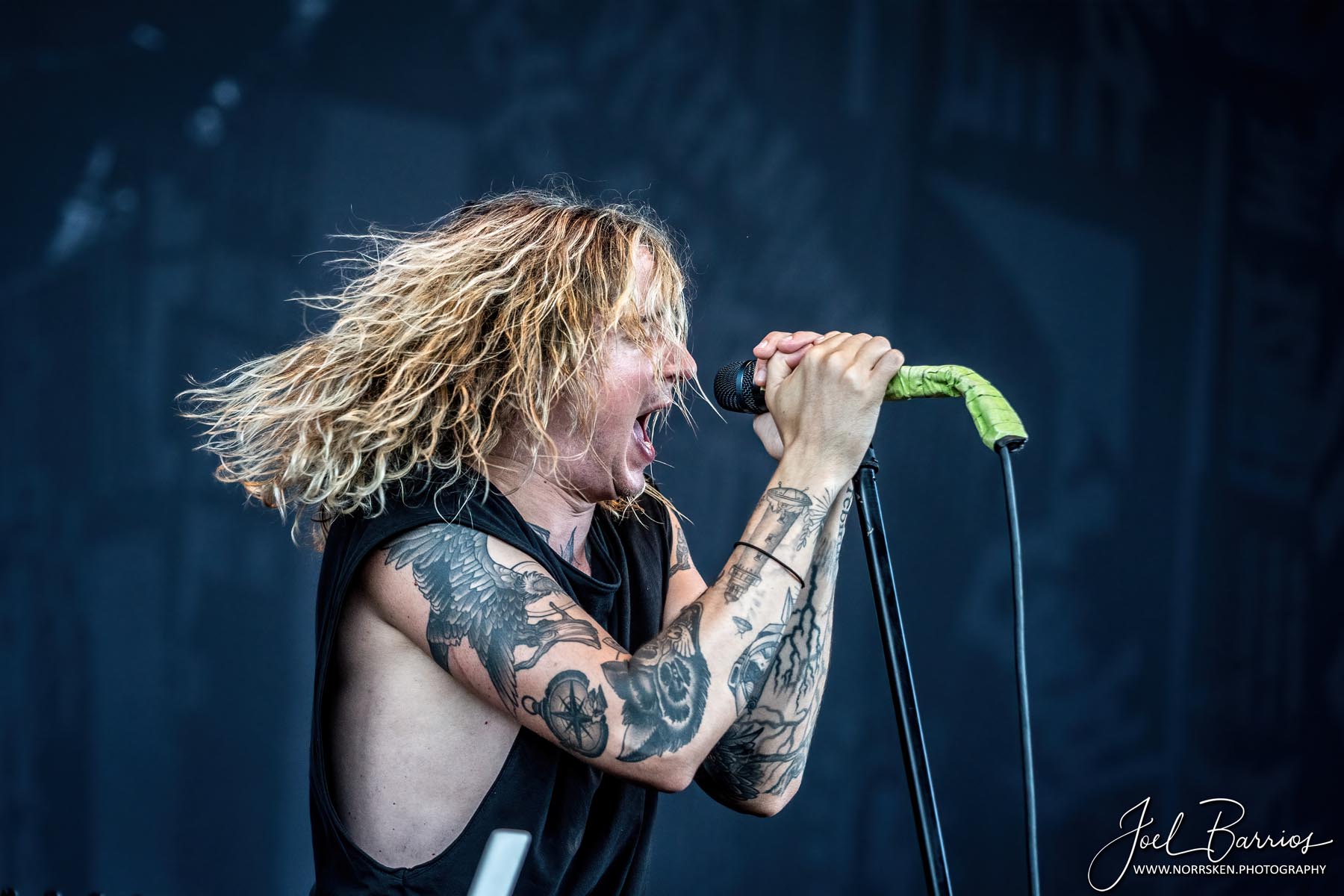 Few bands from the peak of the Seattle “grunge rock” era of the 1990s have endured quite like Alice in Chains. Part of a mighty and successful triad along with Nirvana and Soundgarden, neither the death of their original lead singer Layne Staley in 2002, nor the eight-year hiatus between 1996 and 2004 have been enough to bring them to their knees, and the quartet keeps proving their abilities to stay relevant and powerful in an era way different than the early nineties. 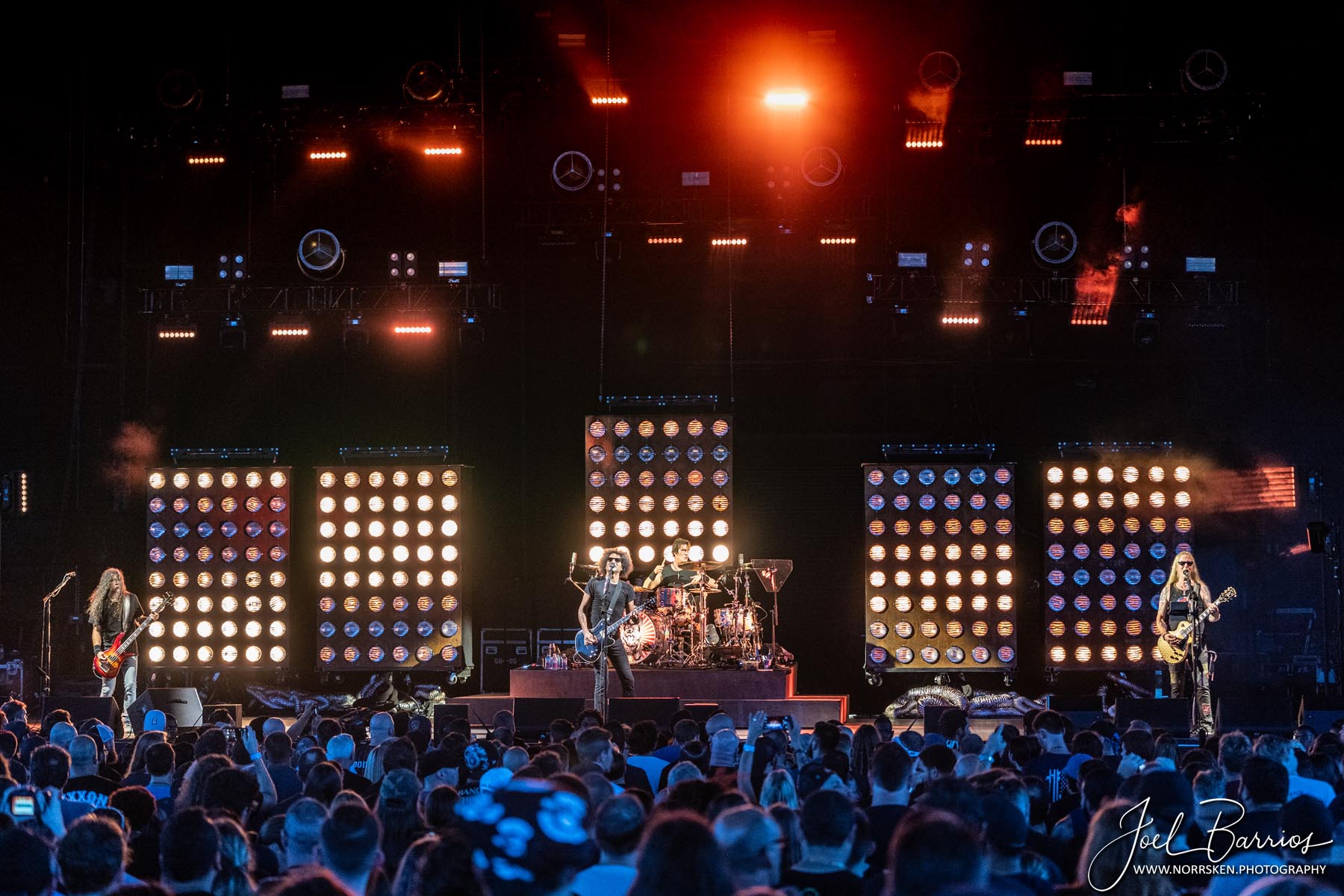 For these ears, despite the fact they started in Seattle and helped piloting the grunge movement to its stratospheric rise, Alice In Chains always had a defined heavy metal core, defined by their sludgy down-tuned guitars, and that was in full display when they took the stage in front of an almost sold out crowd at the Coral Sky Amphitheater. There was barely a single foot of open space on the seating area of 20 thousand chairs, and the lawn was filled to the brim. The band brought a recipe that was destined to drive the adrenaline of the audience to maximum levels and get them singing along with almost every song: Cantrell‘s heavily distorted, chugging and moody guitar riffs which sounded like coming out of the Tony Iommi playbook, the stomping,  and thunderous rhythm section of Mike Inez and Sean Kinney and the commanding presence of William Duval, who not only sounds like Staley did, but adds his own touch to the older material, his voice soaring through staple hits like “Man in Box,” “Them Bones,” and the fan-acclaimed “Roster,” that made the whole venue go in apocalyptic trance. Did I mention Cantrell’s brooding vocal harmonies? 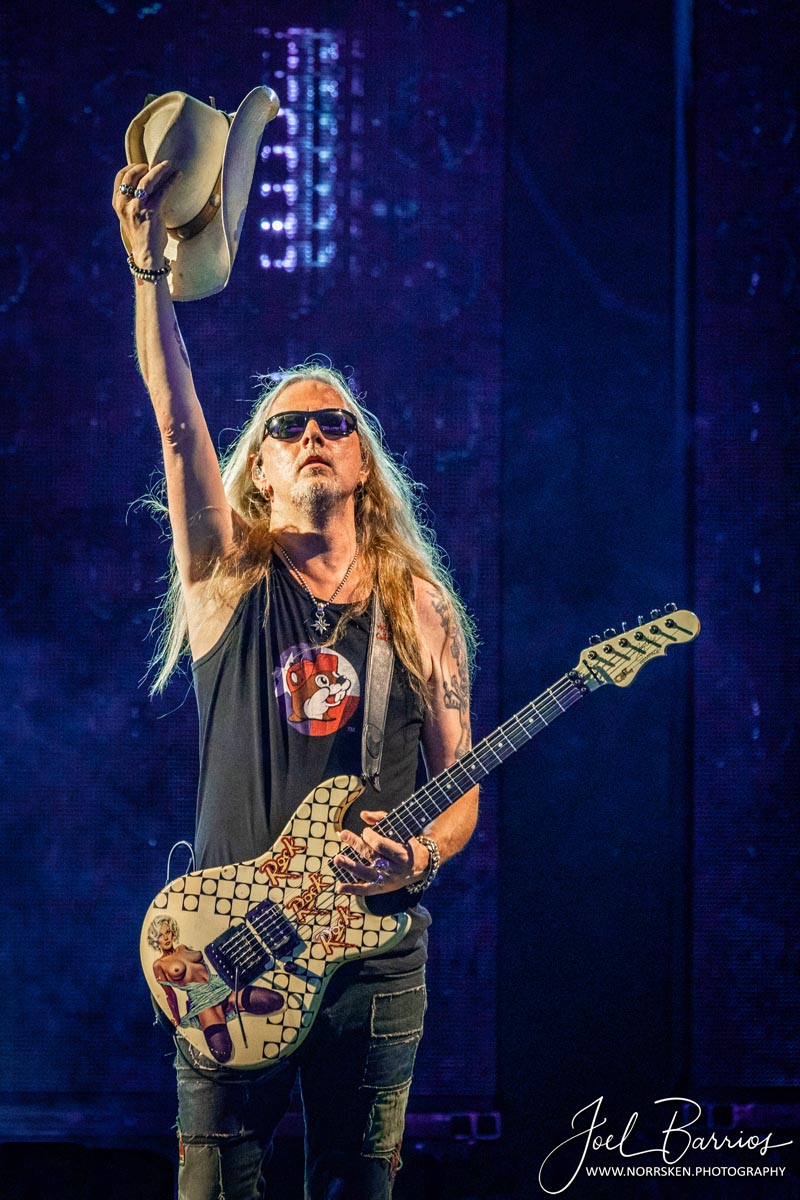 A complete collection of outstanding anthems, and tracks from their recently released album Rainier Fog – which debuted at No. 12 on the Billboard 200 chart, at No. 1 on Billboard’s Top Rock Albums, Alternative Albums and Hard Rock Albums charts – rained upon the hauntingly hot Florida night, delivered with impeccable meticulousness by a quartet of men oozing confidence; and spiced with massive strobe-light effects paired with video visuals, and in sync with the rhythm. We would be greedy if we ask for more, and a standing ovation of several minutes followed the band while they disappeared backstage after taking a picture with the ecstatic audience behind them.

If the multitudes enjoyed and sung the Alice in Chains hits, by the time KoЯn was ready to hit the stage the amphitheater was jam-packed with thousands of adequately bloodied up metal-hungry fans, awaiting the fall of the black curtain covering the stage. Bridging metal with rap was a tendency that dominated the metal scene of the ‘90s and any band which succeeded at that owes a debt of gratitude to KoЯn , the act that made this music prevalent and brought it out from underground. Reaching their 25 years in the music business, these guys are like great wine: masters of the live craft they left the skin in each live performance. 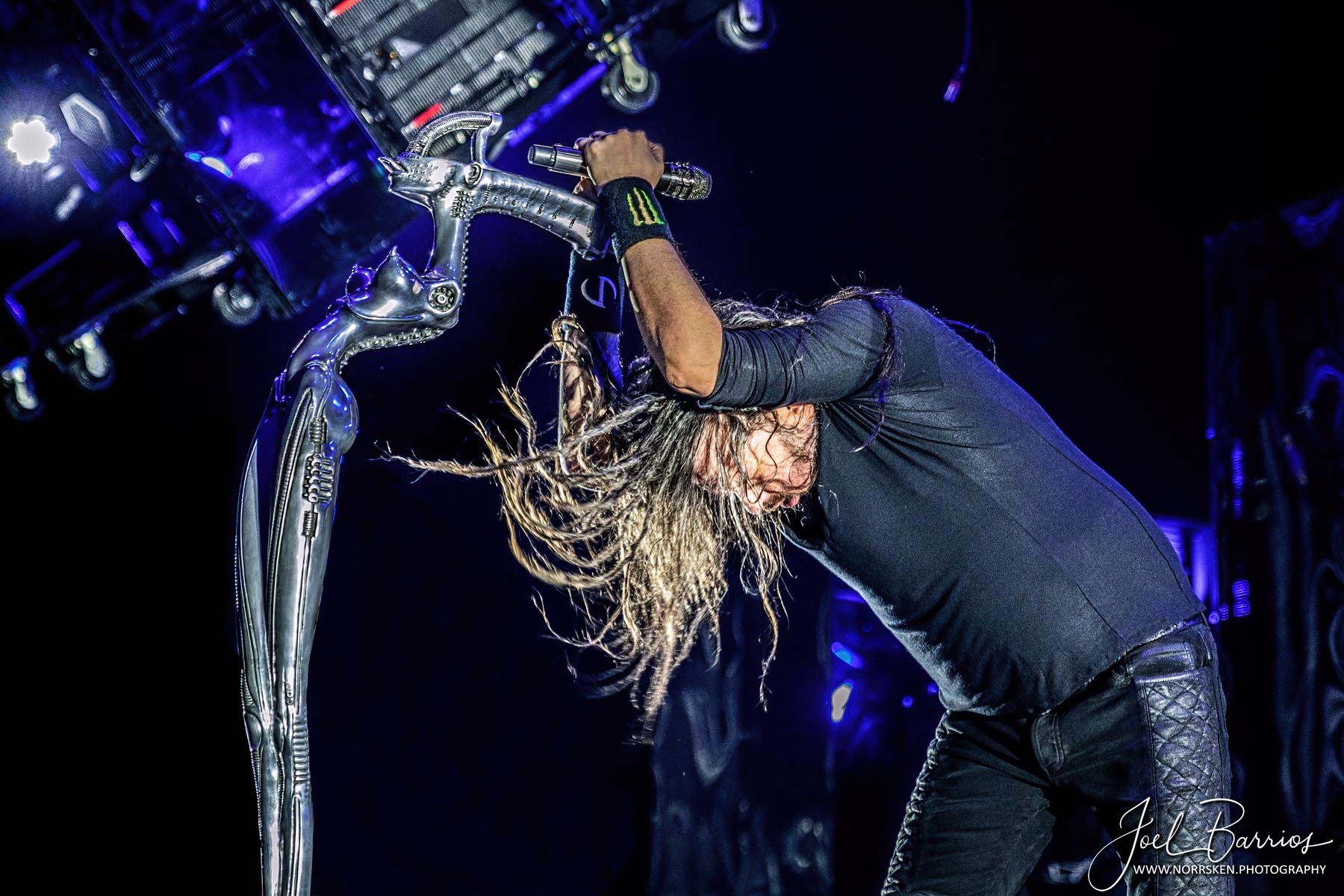 The initial notes of “Here to Stay” served as a cue to send the masses into a frenzied stage, and the gigantic drapery fell showing the silhouettes of the five men head-banging like possessed souls while Jonathan Davis roared maniacally, both hands gripping his H.R. Giger’s designed microphone stand art piece (aka “The Bitch”). With a stage show that keeps getting better and better with every run, the nu-metal pioneers turned the Coral Amphitheatre into an ear-piercing war-zone, unleashing a massive sonic attack filled with hammering guitar riffs, ripping baselines, pummeling drums, and of course Davis‘ trademark death scream / melodically pained crooning. Brian “Head” Welch and James “Munkey” Shaffer impeccably haul out punching riffs out their down-tuned seven-string guitar, dreads flying unrestrained back and forth; while the bottom end frequencies punched the chest of those in attendance, courtesy of the fatty bass lines of Fieldy and the merciless double-bass chops / drum fills of the ever-entertaining Ray Luzier, sitting on his well-lit throne atop the drum riser. 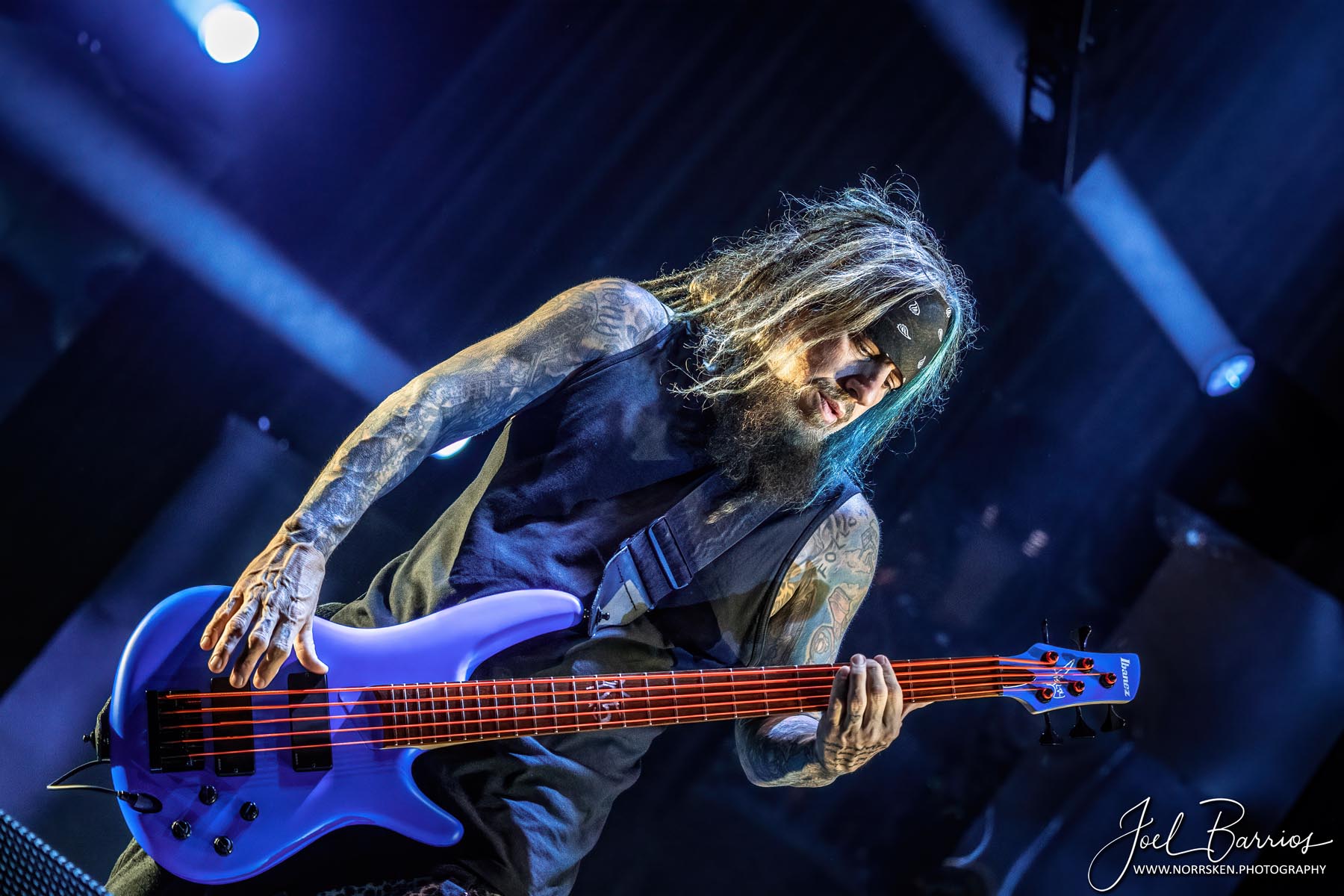 Repertoire staples like “Blind,” “Somebody” and “Rotting in Vain” made their usual presence, and the band even threw a pair of unexpected snippets when they ventured into Metallica’s “One” amidst “Shoots and Ladders” – played by Davis on bagpipes – and Queen’s “We Will Rock You” as part of “Coming Undone”, one of the four songs they played as encore, not before Ray Luzier showcased his otherworldly skills with an overcharged drum solo. A feverish crowd kept asking for more and the Bakersfield’s guys closed the proceeding with the anthemic “Falling Away From Me” sung-along by thousands throats.

Whoever was the mind behind the idea of pairing these bands in a single tour bill, definitely had clairvoyant moment. There are a handful of tour dates ahead, so miss one of these remarkable shows at your own peril.