I recently wrote an article about my Desert Island Yes albums. As I had expected, that prompted some debate, and many comments on my choices. I am comfortable with that – in fact I expected it. As I said in that article, I am a fan of YesWhole… that’s reflected in the solo albums of the band members I’ve bought which far outweigh the number of Yes albums that exist. I love the guest appearances, the collaborations, the pre-Yes bands and the reformed version of the pre-Yes bands! For me it’s all part of the story. Inevitably with such a volume, you prefer some to others and the great things is with the way we stream music today, you don’t have to choose at all most of the time. Fly From Here -Return Trip was one of my choices, and was probably the one that came in for the most criticism, mainly because people viewed it’s choice as taking the place of a “better” album. In addition some commented on how disrespectful this was to Benoit David who sang on it originally.

If you don’t know the story, however, this was an album that came out of Steve Howe, Chris Squire, Alan White, Benoit David and, to an extent, Oliver Wakeman, the then touring line up of Yes, starting to make a new album, collaborating with producer and former band member Trevor Horn. The process resulted in Wakeman moving on from the band to be replaced by Geoff Downes, who was a member at the same time as Horn. After the death of bassist Chris Squire and following some live appearances with Yes on a UK tour, Horn decided to re-record the vocals on this album, singing them himself, involved various band members to add additional overdubs and added in a new song.

(1) I enjoyed the original album – it came after the longest break in albums since the band began, with a line up that had not been universally warmly received on the live stage. The band had something to prove, but did they think they could do it? Well I am guessing confidence levels were slightly lower given this was an untested line up in the studio. Which is probably why they chose the producer that they did. But the end result was something new and different – and I thought it was great.

(2) I am a big Trevor Horn fan – I loved Drama. I like his voice. He is not just a great producer but gets involved hands-on helping bands craft their material, not just sonically but using his songwriting and arranging skills to ensure the get the best end product. Check here if you don’t believe me . I enjoy his work outside of Yes as well, whether it be the Art of Noise, The Producers or his production work over many years.

So what happens when you put the two together?

Well the first thing is that, it has been widely reported that Trevor Horn sang the original guide vocals for much of the original album, which Benoit then followed, and he also appears on backing vocals. So this is not an album that sounds hugely different from the original – so if you didn’t like it first time, this is unlikely to convince you! 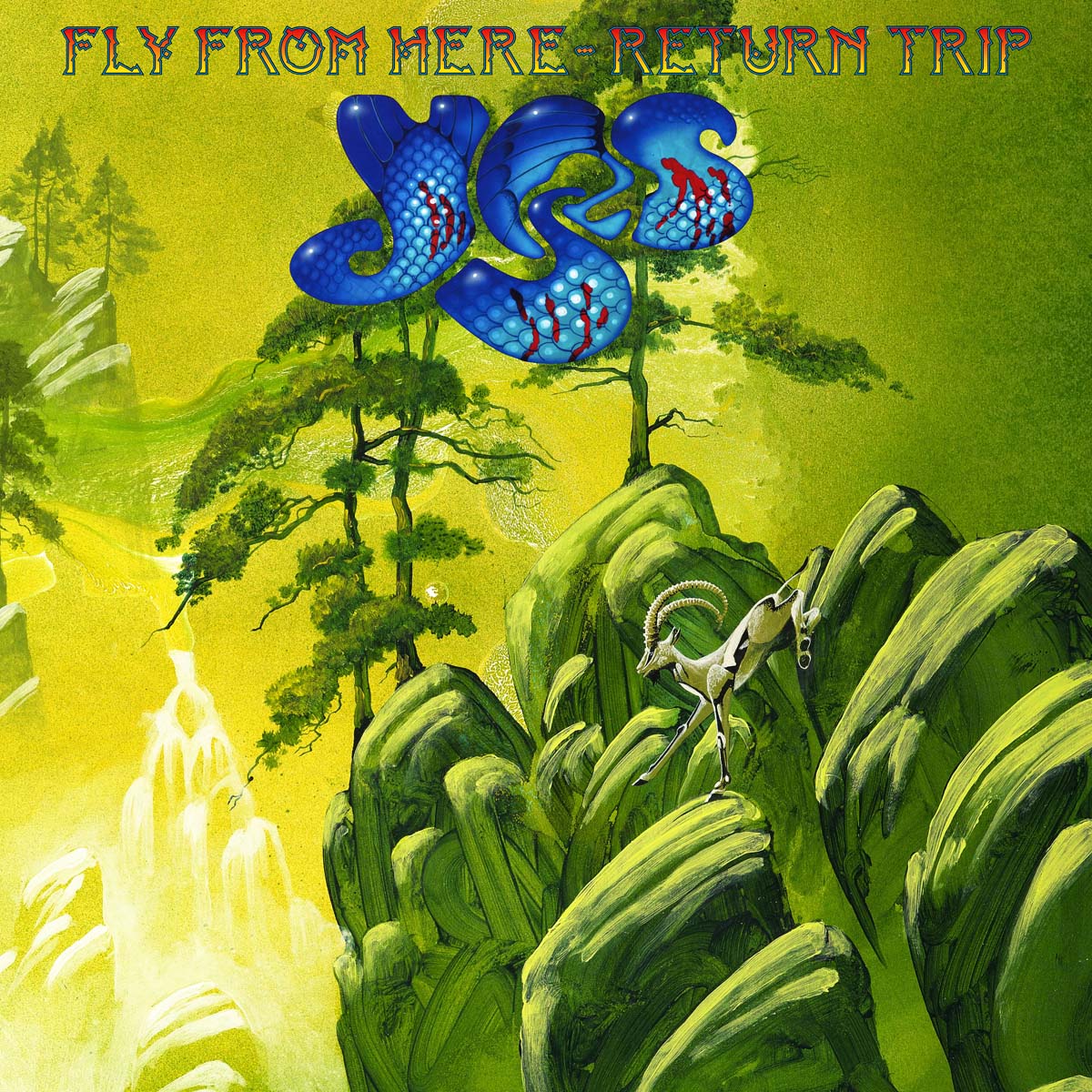 The album kicks off with the longest track in the Yes catalogue, albeit modern influence means it is split into 6 parts – “The Fly From Here Suite”. The seeds of this song were what got Horn and Downes into the band, when Brian Lane, their mutual manager, introduced them. That song didn’t make the “Drama” album, but was played live by the band on the subsequent tour. Horn and Downes also had a part 2 written, and this combined with some new ideas and a Steve Howe instrumental form the complete piece. The “Overture” introduces many of the key themes before leading into “We Can Fly” which was the original 1980 song. Hearing Trevor Horn singing this to me just feels right – Yes’s The Word is Live album had already let us glimpse a live version – his voice has matured a bit in the intervening years, but it’s still his very distinctive style (listen for what I call Horn’s “wide vowel” sounds – ‘and weeee can fly from heeeeah’).

Chris Squire and Alan White were a formidable rhythm section, and having been a band member as well as a fan, Horn knows that strength. To these ears that combination sounds is better represented here than on any of the Rabin era albums. The return of Geoff Downes, at a time when fandom was not that unhappy with Oliver was a bit of a shock at the time. Given Downes was Fly From Here‘s co-writer and the creator of the original synth sounds, it made sense that he returned – as it turned out he stayed and has been a key member of the band since then.

So what has Horn actually done? The most obvious thing is re-doing the vocals. As I said earlier the album does not sound radically different and it’s great to hear that Squire/Horn duo that is familiar from Drama and, in places, 90125. Unlike Anderson/ Squire their vocal ranges are quite similar – the power of their unison singing combined with the shift when they move to harmony has many high points.

When interviewed, Trevor is often quick to put down his own vocal style compared to Jon, but anyone who falls into the “he’s not a very good singer” camp needs to listen to“Life On A Film Set” here. A Horn/ Downes composition it may not begin like a “classic” Yes track – but when the strumming acoustic guitars kick off the last half of the song, the band interplay kicks with a quirky time signature and some classic Steve Howe playing. The precision, sensitivity and eventually power in Horn‘s vocals here bring us back to the heights of the Drama album. As ever with Horn, the production values are extremely high and the soundscape is huge.

Fly From Here: Return Trip boasts two new items, an unreleased song and an extended version of “Hour of Need”. The latter is possibly the one part of the album that doesn’t sit quite right. The acoustic and delicate harmonies of the “Hour of Need” track itself are intact and in this version / mix it actually sounds quite like a Steve Howe focus with, I assume, a feature of the Portuguese 12 string guitar familiar from “Your Move”. What doesn’t feel quite right is the intro/ outro that are added to the song. Of themselves they are great pieces of Yes Music but they don’t really bear any connection to the “Hour of Need” track and somehow the song feels lost when wrapped by them.

The Steve Howe section of the album continues with the acoustic “Solitaire” which sounds untouched from the original. Then comes “Don’t Take No For An Answer”. I wouldn’t say this is a long lost Yes classic but I’d rather have it here along with the contemporary tracks. Steve Howe‘s first lead vocal since he joined 48 years ago is well executed and Geoff Downes add some signature keyboards, before the song ends with a classic Howe solo followed by a breakdown featuring Squire and White.

I did deliberately skip Squire‘s “The Man You Always Wanted Me To Be” to refer to it here. While the “big news” about this release is Trevor Horn‘s vocals, this is actually an album perhaps more than any other in the Yes catalogue which features very prominent and lead vocals from other members. I’ve mentioned Howe above and of course Squire‘s track, which feels like it has been given some extra sonic sheen in this reinvention, stand out for Chris’ lead, Horn’s harmonies (again check the long vowels!) and the percussion and other touches that you can pick up when you listen on a great sound system or headphones.

I was asked in the Yes Music Podcast discussion about album: is it Drama 2? If that was the case on any track it would be on closer “Into The Storm”. More than any other it has the pace and energy of tracks like “Tempts Fugit” plus Squire‘s bass has the wah/flange effect which also features in that track. Again the vocal/ harmonies are strong, with, I suspect, some left overs from Benoit‘s high harmony here. The Horn/Squire/ David combination sounds great and it’s great to hear Trevor in full effect on the powerful “Armies of Angels” section. This might even feature Oliver Wakeman as he was a co-writer, and could be a 7 person Yessongs. Either way, it’s a great track – it’s a shame that the band’s legacy is such that a live rendition of this is, I suspect, virtually impossible and certainly unlikely.

It’s true that in some “fan” pages voices are saying – what’s the point of this? Well firstly it’s a great listen of itself. Secondly it’s a glimpse at a would never/ might have been Yes line up, and a great one at that.