Put iron into fire and the result will be steel. In the 1970’s, a new form of steel was forged in the hottest of fires and today we know that steel as Classic Rock. When a sword is made, it will always be a sword – the weight, the shine, the knight’s crest – it will, in perpetuity, be what the sword-smith forged it to be. Some swords are better than others, some more ornate, stronger, sharper and perhaps more refined. Indeed, some sword-smiths are master creators, while others are less so. But a sword is still a sword, and like the knight’s weapon, Classic Rock is Classic Rock. And some of it stands out above the rest, because what matters is how well it is forged.

Respected German rockers VOODOO CIRCLE are not a band that sounds unlike anyone else. On the contrary, they wear their 70’s Classic Rock influences loudly and proudly on their sleeves, and they make no apologies for this at all.  And while their sound reminisces the likes of Rainbow, Whitesnake, Deep Purple and other 70’s bands with regularity, they do it with massive power, skill and an in-your-face aplomb. The VOODOO CIRCLE sword is particularly strong, sharp and ornate. Let us make this statement up front: if the words “classic”, “evocative” and even “derivative” turn you off, then you need read no further.  But if you are glad that there are still bands out there that can stab a Rock ‘n Roll sword into the corpse of musical mediocrity, just like classic Deep Purple did, then read on.

Several of today’s classic sounding hard-rock bands rely heavily on their bigger-selling influences from golden days of the 70’s and the early 80’s. That is a good thing – those great bands, and today, their protégés, fill a big musical need. We love ‘that’ classic hard rock sound, whether it was produced in the 1970’s or in 2017. So, we should not expect anything that falls faithfully into that genre, to stun us with overwhelming compositional innovation.  But that is in fact precisely the point – we need our Rock ‘n Roll ramparts to be besieged by warriors wielding the sound we love, and that requires a faithfulness to that sound. Some bands do it better than others, and VOODOO CIRCLE are amongst the best. 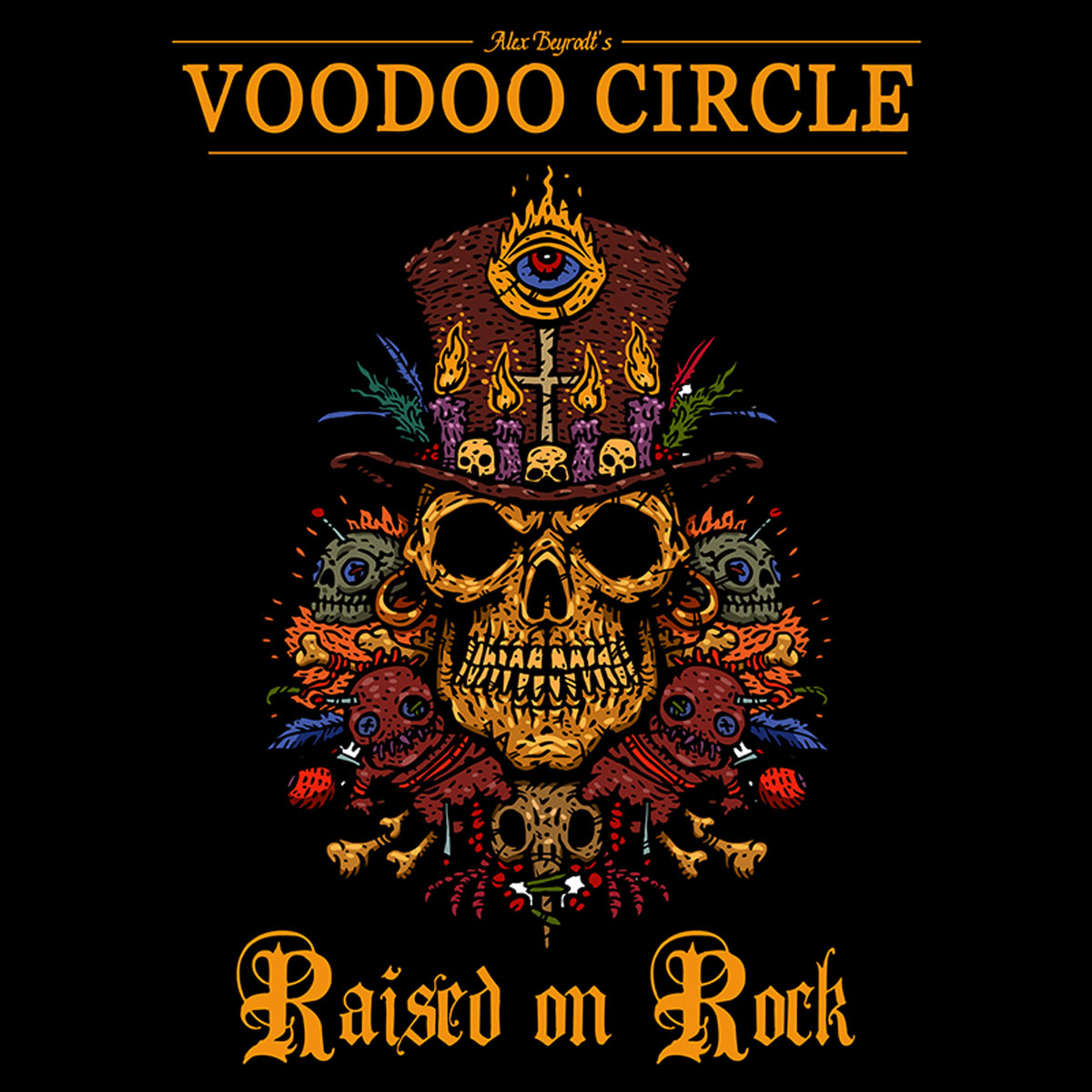 VOODOO CIRCLE is the brainchild of guitar virtuoso Alex Beyrodt (Primal Fear), joined by bassist Mat Sinner (Primal Fear, Silent Force), drummer Francesco Jovino (U.D.O.) and new vocalist Herbie Langhans (Sinbreed, Beyond the Bridge and Avantasia), while keyboards are maned by Corvin Bahn (Saxon, Uli John Roth).  The band’s influences are no less clear this time than on their last album “Whisky Fingers”, and the they fairly pay due homage to these influences in full measure. But with a new vocalist and some of the most adventurous guitar work you have heard in a while, they do so with face-melting talent and authority.  These boys have refined the combination of old-school hard guitar riffing combined with classic metal vocals, and made it into a science, without being slavish. “Raised on Rock” has a distinct classic rock feel, with a modern production sound and power, heaps of raw but polished energy, a tight rhythm section, many brain-melting guitar solos, searing vocals, and the never-ending guitar riffs that 70’s rockers crave, song after song. In the words of Beyrodt, Langhans’ vocal style presents a ‘meatier’ prospect for his compositions, and he is not wrong: Langhans’ voice fits the music like a glove. Beyrodt himself delivers no shortage of heat in the guitar department, and the rest of the band follows suit, in a tight and unified way. With Teutonic knights like these bearing steel to your musical battle, the result is likely to be a quick, sharp victory.

‘Running Away from Love’ kicks off the album with gauntlet in the face to the listener – a message to get ready for a no-brainer hard-rocking experience – with Jovino immediately showing why he deserves his place at this Round Table. Call it retro-rock, call it classic rock, whatever you call it, rock it most certainly does. In fact, it is spot-on. The sparks are already spitting in the furnace. With the battle under way, a familiar blues-rock guitar groove introduces the second track ‘Higher Love’, a mid-tempo rock duel in the best tradition of Dio, Sykes and Hendrix. Langhans explores the gruffer side of his voice in the verse, and it turns out weighty and fitting. Sinner’s bass thump is gargantuan, the solo is pure, scything, metal swagger, the hook is massive, and the song sits in the pocket as solidly as Excalibur in the rock. Audiences are going to love this one live, and in my opinion is probably one of the best Voodoo Circle numbers of all time.

‘Walk on the Line’ is an unashamed homage to Coverdale-era Purple at their best. (There’s even a ‘b-b-b-baby’ in there.) The song features fat harmonies and a sparkling guitar solo, played partly in harmony, that could rival Malmsteen. Beyrodt is one hell of an axe-wielder, and he is unleashed here with full aggression. Jovino’s kick-drum antics also stand out on this one. ‘You Promised Me Heaven‘ is a high-point, and one of the most innovative compositions on the album. A bluesy steel guitar riff gives way to some lightning-fast picking by Beyrodt. Against the underlying picking riff, some interesting, stabbing off-beats counterpoint the lead vocal beautifully. Langhans is in groovy mode again, and his AC/DC tone suits the composition nicely. One imagines that Beyrodt had exactly this feature in mind when composing the song. Sinner’s syncopated bass runs also sound particularly opulent on this one. The song sees Beyrodt delving deep into the Page/Sykes bag of tricks, a veritable guitar festival featuring Telecaster, Strat and Les Paul sounds which support the bluesy feel of the track, adding even greater depth. A brilliant, jabbing, and ascendant example of how classic rock should be written and performed.

‘Where is the World We Love’ is highly impressive. A bit like Europe in heavy mode, it is a song of great beauty and potency. The lyrical insight is fitting for the weighty, desolate speculation of the music, which is a tortured guitar/vocal joust. Hard, heavy, and pleasing, it revolves intimidatingly around an Earth-shifting chord progression that I don’t think I’ve heard before (even though one feels that Blackmore should have written it). As usual Beyrodt absolutely commands this one like King Arthur directing his knights at the Battle of Badon.

‘Ultimate Sin’ is a fast-paced rocker with a memorable Bon Scott vocal chorus and a perfectly-placed guitar squeal that attacks you like a sabre. In places, it channels some old-school Motörhead with more adventurous vocals, leaving a clear message: Take your weapon to the mosh-pit. ‘Unknown Stranger’ conjures Rainbow and Dio with an accelerated four-on-the floor groove. The fact that the song warns of resisting the advances of a stranger, works strangely well, without being preachy. “…Get lost you unknown stranger – leave me alone…“ growls Langhans ominously. Like cutting sabers, light-speed guitars and keyboards match upbeat solos to give the song another Purple patch. Power ballad ‘Chase Me Away’ is a brilliant, massive, bluesy exposition of what can be done with the right combination of tasteful guitar work and meaningful lyrics. The lacerating guitar solo will sear your soul and is a high-point on the album. Langhans is clearly not just a hard rock predator – he handles ballads with great conviction and prowess. Simply gorgeous.

The almost six-and-a-half-minute ‘Dreamchaser’ begins with an almost eastern-sounding riff that morphs into a slow Hendrix passage that would have pleased Jimi himself. Deliberate and granite-like, the song is fueled by Langhans’ piercing range, and the result is pure power.  ‘Love is an Ocean’ starts with an acoustic guitar which slowly introduces a syncopated Bonham-esque drum/guitar pattern followed by an excellent keyboard solo that eventually spins the song away. The riff builds the melody to a crescendo Zeppelin would have been proud of in their darker days, the Bonham stabs returns, and the song brings the album to a more than satisfactory end. 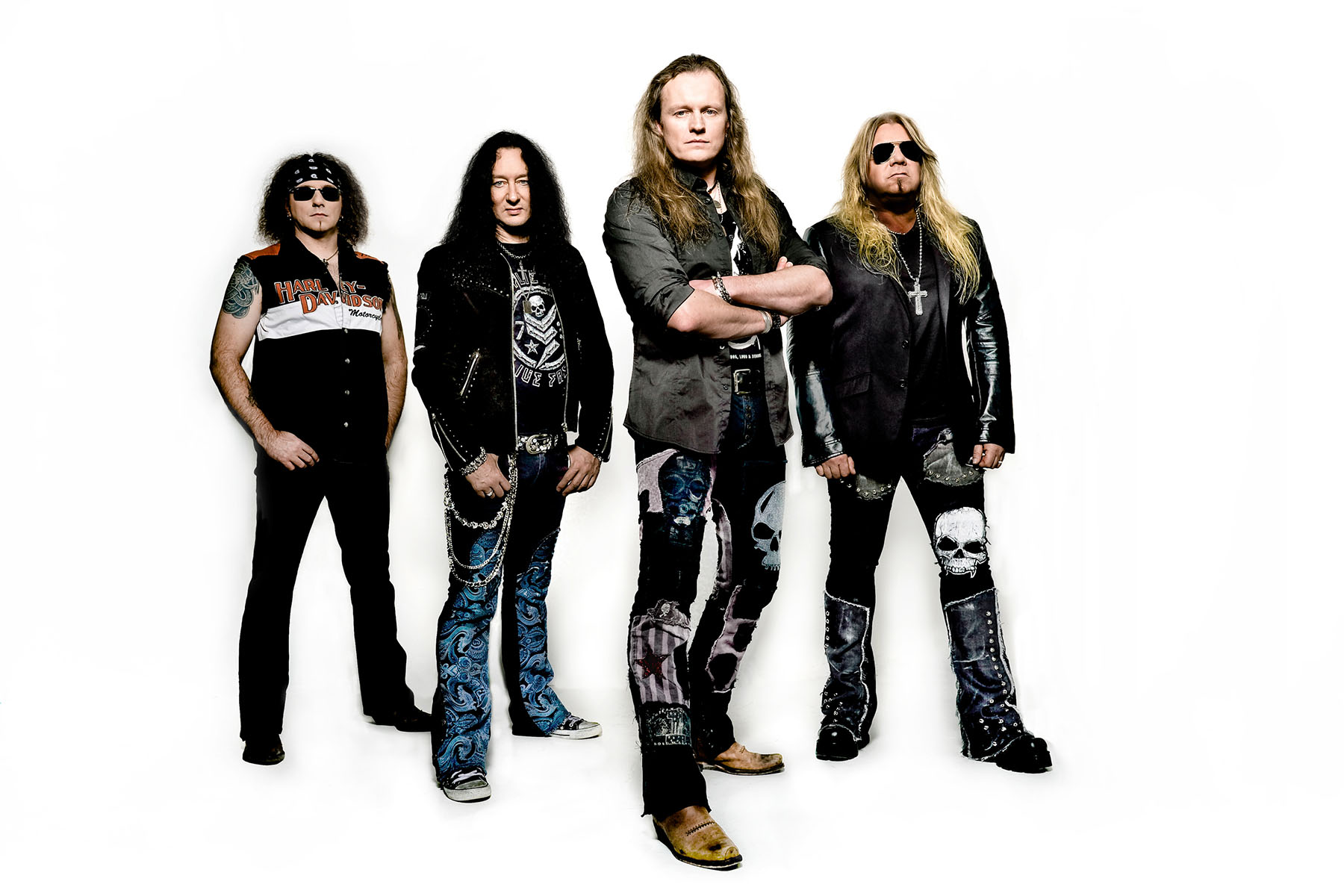 “Raised on Rock” is an album that pierces you in the gut with guitar riffs, solos, classic rock vocals and metal hooks so fundamental and imperative that you can’t help wondering why no-one has made these songs before now. Some critics might say that, being classic hard rock, it has been heard before (or at least parts of it.) This may be so, but it does not matter. The album is just as effective in the modern sense, as it is reverential to the classic rock genre, being greater than the sum of its riffs. Unadultered in your face rock that breaks no molds but delivers pure energy and quality, this is music performed to a level many 70’s rock bands would have aspired to: one can’t help but love it, not in spite of, but because of, the old-school references. When these guys unsheathe their swords, they are not playing around – they threaten with intent, and they deliver tracks as sharp, cutting and unyielding as the genre will allow, without ever abandoning their roots. I, for one, am glad there’s a band out there that makes me feel like I did when I first heard the opening notes of “Burn”. And you know what? I miss that feeling.

A sword is still a sword, and when it is forged in fire as hot as this, the familiarity of the sword’s shape will not bother you. Were Beyrodt and his bandmates raised on rock? There is little doubt. And if you were too, you will love this album.