Progressive Power Metal has seen many bands reach fame in the last 15 years or so. However, over the past span of 365 days chunks I have steadily moved away from the sub-genre. I have found that most of the bands I used to listen to are happy to retread old ground and present it as something shiny and new when it blatantly isn’t (Obviously with some exceptions), and prog-metal has shifted to where bands like MASTODON, and BETWEEN THE BURIED AND ME are marketed as the front-runners of the genre, whereas acts like SHADOW GALLERY and the German melodic progressive metal acolytes VANDEN PLAS somehow still keep flying under the radar when it comes to recognition, even when they would serve as direct contrasts to the typical stereotypes plaguing the genre. 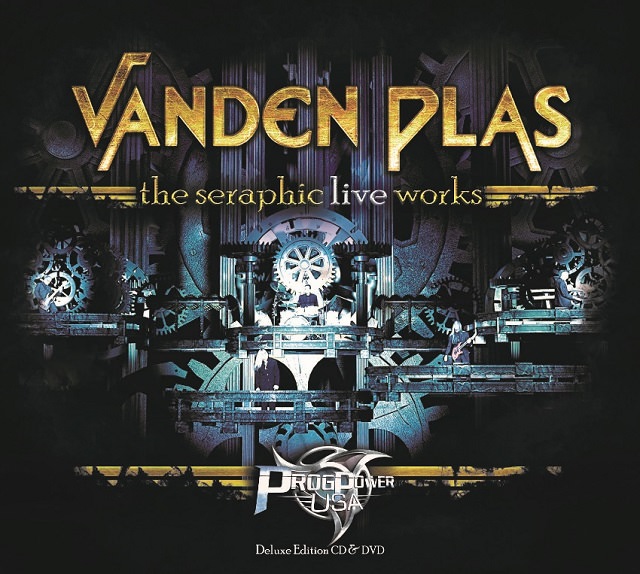 VANDEN PLAS is a band that has been around since 1986, and has been releasing albums every 3-4 years since their debut, “Colour Temple” in 1994. I discovered the band back in 1997 when a copy of their fantabulous record “The God Thing” fell miraculously in my hands while living in Havana, Cuba. I loved that album and it is still played at home very often. Subsequent albums found the band taking obvious leaps in heaviness and progressive structures, while continuing with their tradition of fantastic progressive songs filled with operatic structures and crushing guitar solos, development I followed closely. In their somewhat long career, VANDEN PLAS had only released one live album, “Spirit of Live,” recorded in Paris at the legendary Elysée Montmartre, in 2000; but last May 12th the band decided to dust-off a mothballed live recording of their dynamite performance at the renowned ProgPower USA in Atlanta in 2011, now released as “The Seraphic Live Works” in a CD/DVD set.

Over the 86 minutes duration of the set the band’s musicianship is in spades. The opening salvo of “Postcard to God” pretty much sets the course of what will come, with Stephan Lill’s mind-blowing guitar sounds coupled with Günter Werno’s eerie keys being the music driving factor, accompanied by the solid duo of Andreas Lill on drums and Torsten Reichert on bass guitar as the perfect backbone for Andy Kuntz to easily hit all the right notes in his operatic vocal delivery. The slow build during “Holes in The Sky” allows the band to show how they can revisit themes and motifs in a variety of styles and really sees the keyboards come to the fore to support one of Kuntz’s best vocals of his career, meanwhile segments of the official video-clip of the song are intelligently intertwined with the live feed. The soaring, yet controlled “Scar of An Angel” illustrates VANDEN PLAS’ ability to go from highly atmospheric and sparsely arranged sections, straight into full on bombastic riffs and roars with ease and skills, whereas the crunchy and killer riffs in “Frequency” bore a hole in your skull. The band’s chemistry is palpable and they manage to engage the audience with a flawless and dynamic stage presence. The show is brilliantly closed with an extended version of “Silently” from the “Christ 0” album (this time around clocking in 11 magnificent minutes) that starts with a quiet piano line that turns fast into a guitar driven melody quieted down by the lovely soft vocals and dreamy keyboard lines, exploding towards its second half into a keyboard sustained  long instrumental part with incredible drumming, electric guitar and keyboard solos, to finally explode in a full force progression of guitar hooks and rolling drums to a spectacular finale.

The only downside I’ve found (and judging from the promotional stream, as I did not have the official release in my hands at the time of this review) is on the visual side. The stage setup is completely flat, and the lighting, camera work and video cuts don’t really keep up with the excellent level of the music. They feel sort of semi-professional to be completely honest. Despite this shortcoming, this DVD shows a band that truly shines and stands out from the multitude of its peers, offering a memorable demonstration. Hard riffs, elaborate keyboards and orchestral arrangements plus catchy hook lines come together in a perfect symbiosis, effortlessly highlighting VANDEN PLAS’ musical trademarks, and although some years have passed since this concert actually took place, this DVD remains as essential purchase for any fan of melodic multi-layered progressive metal played with gusto and intensity. Bravo!