About a year ago, I reviewed the initial chapter of Vanden Plas’ “The Ghost Xperiment,” and after revisiting what I wrote then about that recording, I found it difficult not to repeat many of the same observations with the new one.

That’s in part because “The Ghost Xperiment: Illusion” sounds so much like its predecessor, to both good and bad effect. First, the good. Vanden Plas is a precision built war machine that swaggers and bludgeons while being able to stop on a dime. Years ago, I heard people reference them as Germany’s version of Dream Theater, and while that’s not entirely accurate, I will concede that the level of musicianship blended with melodic metal on a bombastic, theatrical scale is certainly applicable.

Sonically, they sound great, and the production on this recording is hard to find fault with. In particular, Andreas Lill’s drums have an extra crunch and the floor tom thunders in the headphones in ways I’ve not heard him recorded before. His performance is one of the stronger contributions to this record and there were a number of times where my ear just perked up on one of his fills, which may have been distinctive but still felt like he was playing for the song. Interestingly, on the previous release, it was his brother’s guitar work that rose to the forefront, whereas on this record his solos don’t stand out as much, but his juggernaut rhythm playing remains integral to the overall cohesion of this record.

The other band member’s playing that demanded more attention on this recording was keyboard player Gunter Werno, whose solos were tastefully written and played with some patches that had a touch of originality while not sounding out of line with the band’s overall tone.

On the negative side of what’s similar to the previous installment, I still can’t discern many of the lyrics. Andy Kuntz has a very distinct voice that is both competent and creative, but it’s also not easy to comprehend what he’s singing about. The result of which is that the listener may feel like they’re watching a foreign film that has a story line but due to the lack of subtitles, the viewer has a sense of the quality without really grasping the concept presented. It would have been very helpful for the record label to provide a link to the lyrics but without such, I’m at a loss about the storytelling aspect of “The Ghost Xperiment.” And that’s a shame, but I suspect that a fair amount of thought has gone into the concept, but without a road map, one has to focus mostly on the music.

And the music is good. Most of the songs are lengthy (7 minutes or longer), which runs the risk of creating fatigue at times, as the thick sound of Vanden Plas can at times suffer from a bit of sameness. There are some new things throw into the mix on this recording, including a few guest appearances from Alea and Ulli Perhonen on vocals, but there are still times when one’s attention meanders during the listen, only to be pulled back in due to a new chunky riff from Stephan Lill. His playing is very strong, but the solos he contributed to part one stood out far more than those here.

Andy Kuntz’s layered harmonies are somewhat predictable and his nasally delivery may be a bit of an acquired taste for some, but with vocals often being the weak link in progressive metal bands, he does have enough distinction, versatility and range to give the band its signature sound.

“When the World Is Falling Down” opens the record with an ominous soundtrack vibe from horns, only to be torn apart by a chugging electric riff that kicks the mood into overdrive. Once again, I feel like this is a soundtrack to a movie I’m not seeing, but musically it’s punchy, heavy and accessible. It’s a perfect starting place for getting to know the band, because if you don’t like this song, you probably just won’t like Vanden Plas. The riffing about 3 minutes in elevates the song to a higher place but the solo comes up as a missed opportunity for something that could have been more memorable. It reappears at 4:30 in shredding blast that yields to a lengthier keyboard solo. Solid single that summarizes and spotlights the entire band. 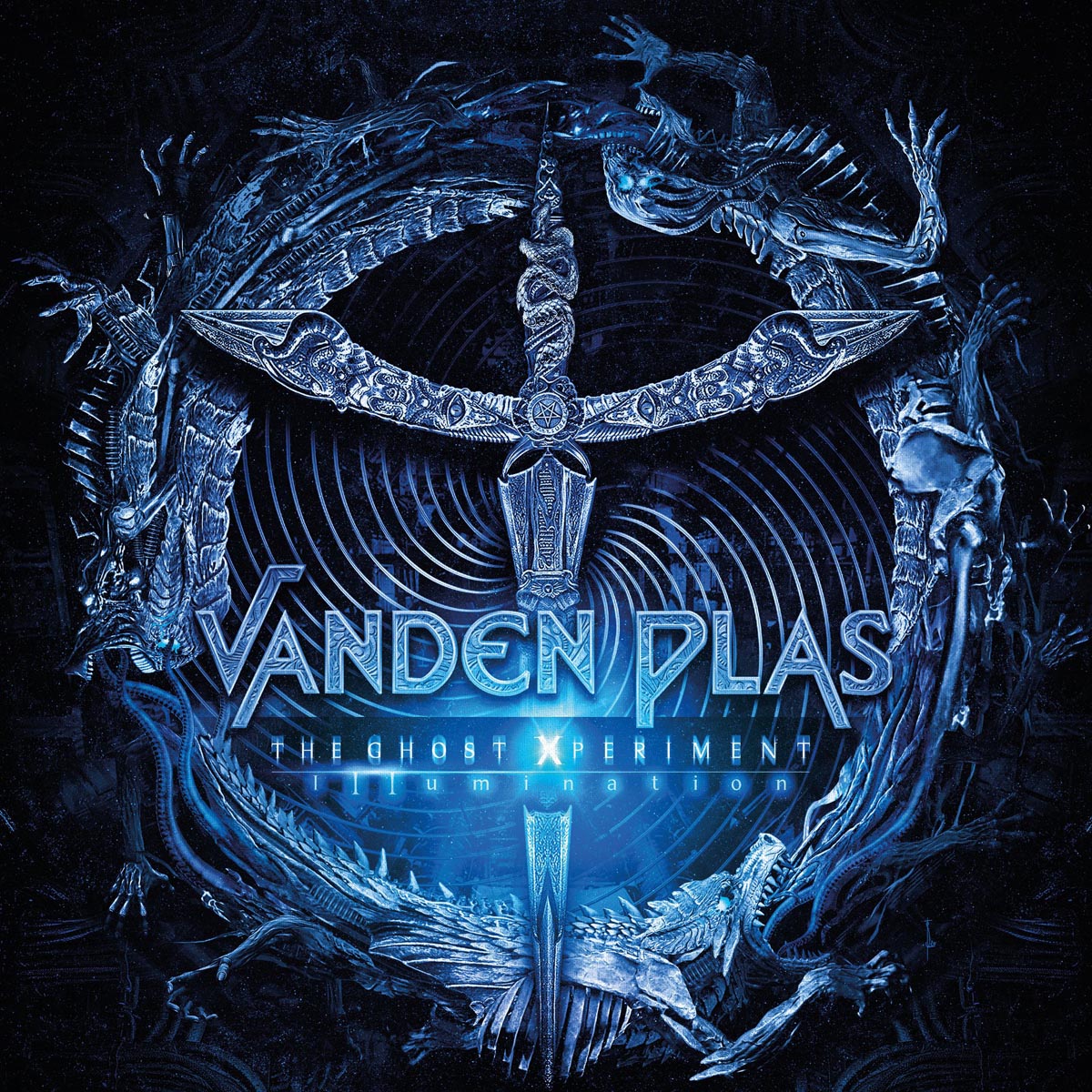 “Under the Horizon” opens with a delicate intro that floats with a near whisper vocal delivery till a machine gun-like attack of the Lill brothers announces the arrival of one of the record’s best riffs about a minute into the track. It’s an off-time chunky run supported by keyboard strings that just assails. The off time crunch recedes in an accessible chorus and reappears in the next verse that makes it hard to follow but also hard not to move to. This would be a killer track live.

“Black Waltz Death” opens with an acoustic respite from the previous track’s assault, and builds with a folksy vibe that plods slowly along like a ballad. It builds over time with some angelic choir backing and seems to point to a pivotal story telling moment, which sadly I have no idea about. This is more bombastic, theatrical sounding stuff that makes Vanden Plas stand out from a typical metal band, and Lill takes a tasteful solo about four and a half minutes in that once again feels like good was the enemy of great on it. The track runs for over 8 minutes but probably feels drawn out despite another strong keyboard solo.

“The Lonely Psychogon” opens up to another upbeat riff that is a welcome kick in energy after the mid temp length of the previous track. The chorus backs off from the aggressive riffing of the verses which provides some push and pull tension but makes the verses more intriguing. Three and a half minutes in, there’s a break in the structure that cues up Lill’s soaring solo, which fails to stray from what’s expected, only to give away to an angular groove that is the platform for Werno to solo over extensively. Good stuff to be sure, but again at over 8 minutes in length without a ton of new ideas, it tests one’s attention span at times until concluding with a delicate piano lullaby.

“Fatal Arcadia” blows into being with what can only be described as a nod to Dream Theater’s John Petrucci in both style and execution. It’s disrupted by a calm section that is dashed to bits again by Lill swinging his axe. At this point, there’s probably something really significant happening in the story. Just don’t ask me what it is. This is probably the most Metallica-like section of the album, too, and probably the heaviest groove that Werno lays a keyboard solo over. Five minutes in, Lill plays some jarringly light electric tones that fall off the table into a barrage of sweeping notes that are one of the better sections of the record that chunks again into Metallica territory with some unexpected death growl rising out of nowhere. Then we’re thrown into floating space. This track is extreme in its dynamics, as well as it execution, and is likely to be polarizing for some.

“The Ouroboros” is about Lord knows what. Clocking in over 13 minutes, it’s a grandiose endeavor that begins with the most delicate entry, and very slowly builds into a bombastic revealing moment that probably means something significant. Its suspended pace does grow long in the tooth eventually, taking over 6 minutes before a wispy cascade of suspense notes on keyboard are obliterated by a crushing Lill groove at 7:00 that sounds like a battle between fairies and Thor. The second half of this song is pretty irresistible, with a great groove and sailing solos that has that hopeful, victorious vibe of Dream Theater’s most positive moments. Wish I knew what was going on in the story, dammit.

“Ghosts Engineers” concludes the story line with a pensive, melancholic wrap up that sounds like something that would be rolling over the credits of a tragic horror movie’s ending. Thus concludes the Ghost Xperiment tale (I can only assume).

Like the first installment of “The Ghost Xperiment,” this record does reveal itself over multiple listens but suffers from a bit of sameness across its length. Sonically, it sounds superb, the musicianship is strong, and some of the songs have moments of brilliance, but the entire story line and lyrical content mostly remain a mystery to me. In hindsight, I may have been a bit stingy on the first installment’s rating numbers, so I’m feeling a bit less like Scrooge despite the dismal events of 2020 and therefore give the band a few higher marks this time around. Much like the global pandemic we’re enduring, the Vanden Plas tank leaves a trail of destruction it its wake.

Frontiers Records offers up the second installment of the German progressive metal acts theatrical concept work, which once again is hard to follow without the aid of lyrics and a story synopsis, but still provides a good listen that improves with additional exposure, and leaves no question about the band’s precision, power and professionalism.