Passion never goes out of style, and neither does the brutality of death metal bludgeoned with the relentless speed of thrash metal. The best of both worlds come together in the no-frills, all-thrills “Solitude in Madness,” an album which marks the sixteenth full-length opus for Polish metallers Vader as they progress well into their third decade of activity. “Solitude in Madness” is a succession of unforgiving punches that forgo more contemporary textures and retain the short, explosive bursts of energy that have reliably given the band unstoppable momentum and a steadfast personality. Unwavering since their first release in 1992, Vader’s latest offering is proof that they have stayed true to the roots of old-school and have no plans to slow down any time soon.

Founding member Piotr “Peter” Wiwczarek has been Vader’s strongest constant in their many years, and is the only founding member who remains in the band. His signature vocals have held well-established fame in the Polish metal scene for decades, with guest vocal appearances across all genres, including the Polish single of Sabaton’s hit song “40:1.” But “Solitude in Madness” shows where he is most comfortable: shouting in the brilliant spotlight provided by a hailstorm of percussion and held aloft by shrieking guitars that stop for nothing and no one. Rarely stepping back to give the guitar time to breathe, this is an album that hones in on the fuel provided by Peter’s magnetic vocal presence. The range and aggression held in his rasping screams match flawlessly with the sheer grit and brutality that cascade in waves off of Tomasz “Hal” Halicki’s bass.

The punishing pace which begins in “Shock and Awe” holds up throughout the album, one which is constructed through a series of short tracks that rarely stray far past the three minute mark. Simplicity is part of this album’s beauty, no fanfare to suffocate the stunning fireworks in third and shortest track “Despair.” Offering an unstoppable minute of pure delight in the hands of guitarist Marek “Spider” Pająk, “Despair” is proof that incomprehensible complexity is not the only method through which to demonstrate irrefutable skill. This song is not Spider’s only moment of furious glory, his masterful talent on the strings also highlighted in the high-pitched layers of “Sanctification Denied.” Peter also wields a guitar alongside his voice, a chemistry which carefully weighs the role of instrumental structure and vocal prominence that combine to make up Vader’s distinct sound. It is a case of careful songwriting and dextrous musicianship seeking a middle ground, one which stays true to the established Vader style without hindering the potential of its members. 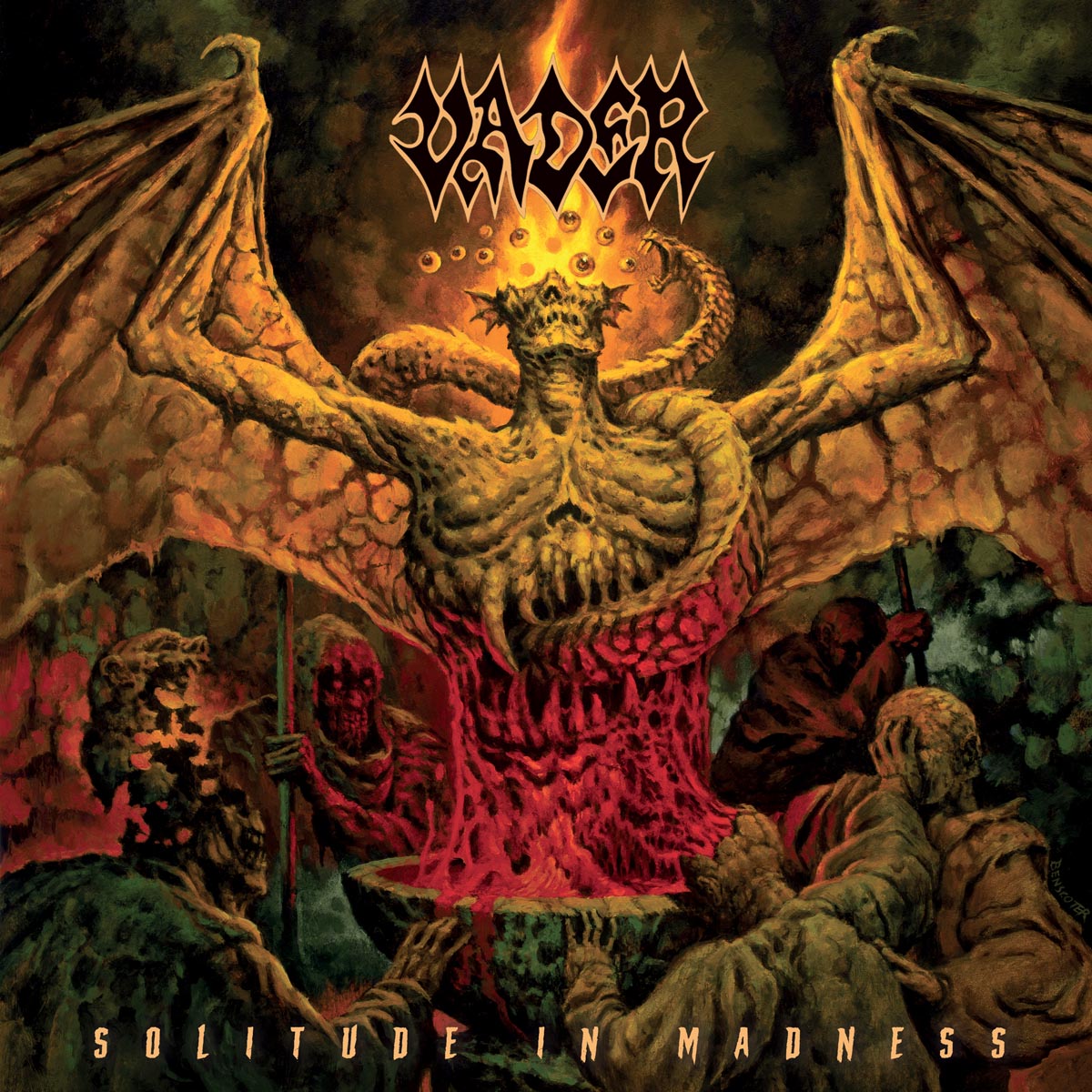 Skilled atmospheric inflection on the part of Peter and Spider are not the only strengths to be found within the rapid-fire blows of “Solitude in Madness,” for the entire album is held aloft with utter excitement for the art. Vader’s cover of Acid Drinker’s “Dancing in the Slaughterhouse” is a perfect blend of speed and gravel, invigorated from a seemingly endless well of energy. And for all of its aggression, “Solitude in Madness” rarely feels angry in the same vein as most traditional death metal, using percussion as a compliment to the tones of the guitar rather than relegating drummer James Stewart to nothing but bass and cymbals. “And Satan Wept” is yet another demonstration of this well-plotted relationship, fleeting riffs pursuing speed and skill in simple measure without overwhelming the pitch of Peter’s voice. This choice in songwriting allows Vader to remain unmistakably inspired by all things traditional, yet gives their sound a unique twist of brightness and creative vision that provides “Solitude in Madness” an additional layer of charm.

Most inviting of all is the low commitment required to listen to “Solitude in Madness.” It is a strong work that has the legs to stand on its own, both with individual songs and as an album. No comparisons need to be made to prior Vader work to understand that “Solitude in Madness‘ ‘ was created by masters of their craft, an intimate familiarity with death metal seeping through even in the thrash-inspired moments of shrillness and speed. The short track lengths and old-school inspired song structures make “Solitude in Madness” a surefire hit for fans of death metal and thrash metal alike, cutting straight to the bone with passion, speed, and skill. Retaining personality outside of contemporary textures, Vader continues to prove that they have earned their long standing fame, and offer “Solitude in Madness” as a treat to new and old fans alike.

Simplicity is bliss, and Vader’s latest album harnesses the pure might of old-school death metal to deliver an album that crushes with speed and brutality. The wisdom gained through years of experience has built a strong foundation for “Solitude in Madness” to stand on, and leaves it as an inviting opportunity for fans of death and trash alike