The triumph of the metal spirit has commenced.

With the ongoing lockdowns still looming over the metal world’s head like the Sword of Damocles, it may seem a foreign concept to see a big name band setting the stage on fire in front of a live audience. For those who were not residing in the nation of Bulgaria in the closing days of last year’s summer season, these words hold literal truth, as said nation was among the elite few that would be patronized by a band of the scope and caliber as UDO. Thankfully the foresight of the iconic original front man of Accept and his current fold of support musicians has allowed the rest of the world to now experience what we’ve all been missing for the past year. With the scene now dominated by live streaming events that could best be likened to live television shows, a sigh of relief will likely be given by most, as the metallic extravaganza known as the Pandemic Survival Show has been recorded in all its audience noise-steeped glory and made available for the sanity of the present generation and posterity via both audio and video media.

Building upon the penned up energy of a fold that had not played live in 9 months on that fateful day in mid-September, this collective of largely younger instrumentalists led by a battle-hardened stalwart of the days when metal reigned supreme met the audience in the most explosive of fashions. Riding high off the ambitious collaboration with the Concert Band of the German Armed Forces dubbed We Are One and the still simmering success of their powerful stylistic throwback album and 2018 studio LP “Steelfactory,” this special occasion was one where old and new merged seamlessly. The forceful battery of the rhythm section, spearheaded by Udo’s own son and drummer Sven Dirkschneider, and the deafening fury of the twin guitar assault provided by Andrey Smirnov and his newly acquired foil Dee Dammers provided a colossal wall of modernized metallic sound behind the veteran helmsman. Yet for anyone with even a slight level of familiarity with heavy metal’s formative days in the early to mid 1980s, every song heard could have been written in said era regardless of whether it was or not.

Clocking in at nearly two and a half hours and including two successive encores, comprehending the massiveness of this event is made easier by each CD containing an equally cut half of the respective whole. The first act in this metallic passion play largely consists of newer material from the 2010s, with such noted offerings from the “Steelfactory” LP as high octane cookers “Tongue Reaper” and “Rising High” hitting the ears like two full syringes of pure adrenaline, while noted mid-paced crushers such as “Make The Move” and an expanded presentation of the infectious rocker “Rose In The Desert” also steal the show with their catchy, fist-pumping hooks. Interestingly enough, despite Udo’s previous statements about moving away from featuring old Accept material, part of this portion of the show also features a rocking rendition of Metal Heart banger “Midnight Mover” and a show-stopper of an expanded version of “Princess Of The Dawn”. Through it all the short-haired commander at the microphone howls and shrieks with the same fervor as he did on the original studio versions of these songs at the age of 68. 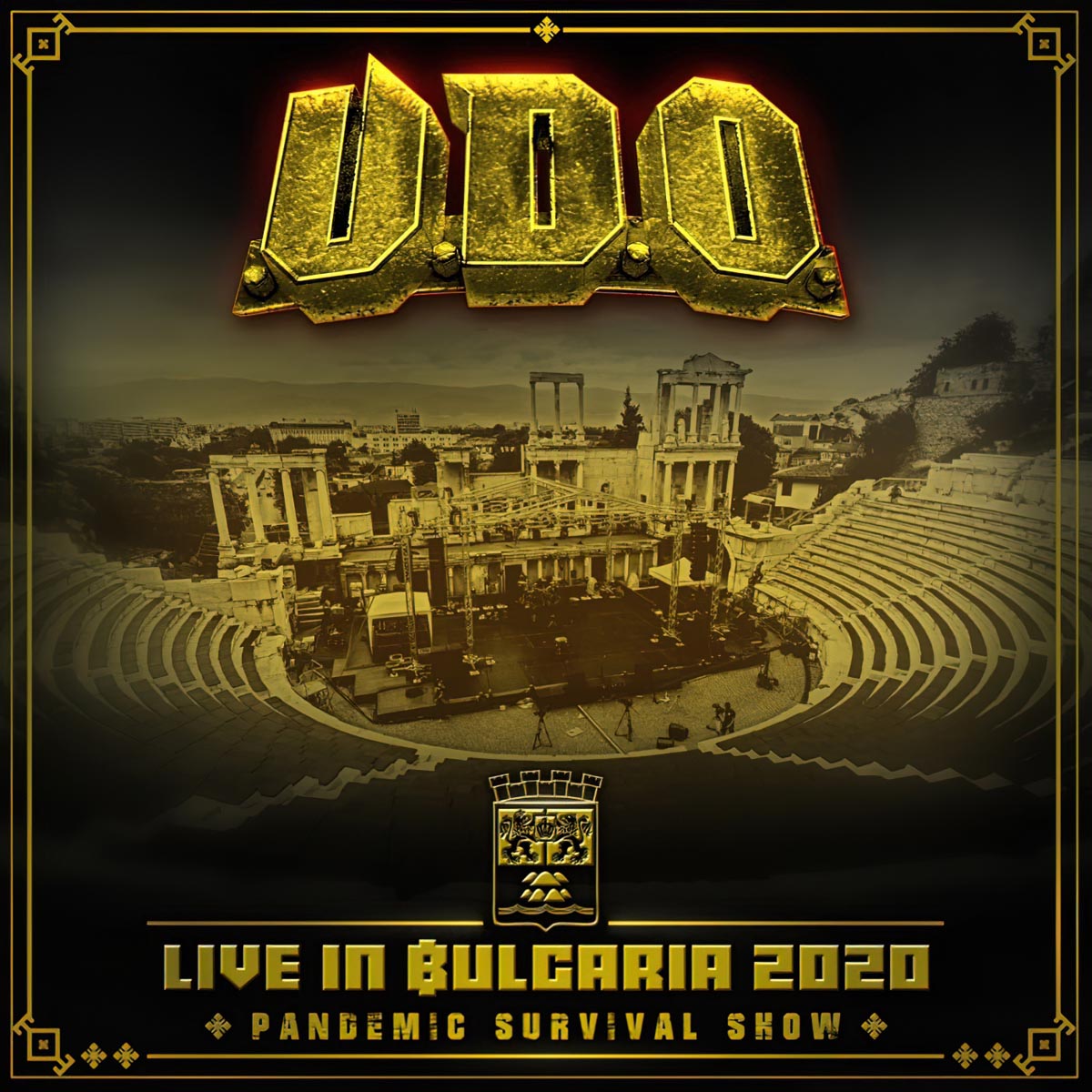 If the first half of this festival of metallic fury could have punched a hole in the roof had it been in doors, the second left a gaping hole in the stratosphere above Bulgaria. Kicking off with the Painkiller-inspired modern speed metal monster of a title song off UDO’s 1991 smash album “Timebomb,” this is where the band showcases the extent of their respective chops. A drum solo segment for Sven follows immediately after, which is itself chased by a rather impressive bass display out of newcomer Tilen Hudrap that would make Geezer Butler proud, all the while taking the occasion to rev up the audience even more. Though a few latter day entries would be featured during this portion of the set, the focal points would include more of Dirkschneider’s older material, with a pair of classics from his debut solo album “Animal House” in the title anthem and the mid-paced sing-along romp “They Want War” really slamming down on the nostalgia button. However, the final encore performance where things are blown into orbit with a trio of Accept classics in “Fast As A Shark”, “Metal Heart” and “Balls To The Wall” closing things out, the latter two chock full of guitar-driven asides, complete with the obligatory nods to Bach and Beethoven that Accept helped to popularize in metal circles decades ago.

To say this is one for the ages would be to state the obvious, but at the end of the day this is business as usual for one of Germany’s eldest heavy metal exports. Those with the extra cash to burn on the DVD/Blu-ray version of this concert will be treated to a number of theatrical visuals to rival the likes of Iron Maiden and Judas Priest, with such standout moments as Smirnov playing his “Animal House” solo with his guitar backwards and above his head and the entire band putting their game faces on as they chant those signature low-toned gang vocal segments to the four winds. The stage, which is set in front of what looks like a number of Ancient Greek buildings, is a show unto itself that breathes an air of pomp and circumstance into this show that arguably makes seeing the visual rendition of this concert essential. But even those who stick to the audio alone format will find a band that is still in their prime, and will be poised to re-conquer the world yet again as soon as humanity conquers this current trial. It’s a triumphant ode to the huddled metal masses, and a much needed breath of fresh air that is soon to permeate many a cooped up household.

The hardboiled will and determination of a seasoned metal veteran overcomes the adversity of 2020 to deliver a concert event for the ages, bridging the divide between the bygone days of 80s heavy metal and the current decade.