A dragon’s light burns the brightest.

If there was a single band that could pointed out as taking the fantasy-based side of power metal to its logical conclusion, all fingers would point to that beloved band of High Fantasy LARPers with tales of dragon’s fire and wizardly deeds known as Twilight Force. Foregoing the occasionally dark and dissonant interludes and flirtations with progressive metal that Rhapsody Of Fire would cut their fanfare with, let alone the borderline extreme brand of dark symphonic storytelling reserved to the likes of Australia’s Bane Of Winterstorm, this is an outfit that essentially marries the ultra-light brand of post-Helloween speed and melodic luster staked out by Fairyland a decade prior and exaggerates it to the point of rivaling the overt cheer and merriment of Freedom Call. With two fine albums of campy, occasionally bordering on comical conceptual pursuits of the medieval variety, the winds of change recently came sweeping into this outfit and brought about an auspicious changing of the guard that led some to speculate of an uncertain future in their midst.

One would be remiss to say that recently departed vocalist Christian Eriksson’s (aka Chrileon) glass-shattering pipes could be easily replaced, yet following a brief stint of Reinxeed front man Tommy Johansson filling in for the last tour, the concurrent game of musical chairs going on in this style’s de facto homeland of Italy in 2017 seemingly accomplished just that. The dissolution of Luca Turilli’s Rhapsody found ascendant impresario Alessandro Conti (of Trick Or Treat fame) without an outlet for his newfound love of symphonic power metal, and his addition to the Twilight Force franchise has arguably injected it with a veteran’s degree of credibility on their 3rd studio outing Dawn Of The Dragonstar that Rhapsody Of Fire ended up achieving 5 albums in. Possessing a more poised and dense tenor sound relative to Chrileon’s piercing high notes, Conti’s vocal work actually proves a bit more conducive to this band’s heavily layered and ultra-technical approach, resulting in something that his contribution with Luca Turilli a few years prior could have been had it stuck closer to the fantasy realm.

Naturally with any changing of the guard, especially the captain thereof, some points of contrast will emerge with any subsequent studio endeavors. To their credit, these alterations have proven positive, as the ebb and flow of this album has more of a symmetrical, well-rounded studio affair that avoids the almost EP-like shortness and over-indulgent spoken interludes of the debut and the wildly drawn out and campy character of Heroes Of Mighty Magic. Conti likewise takes a more measured approach and uses his ultra-high screams a bit more sparingly relative to his predecessor, allowing the elaborate game of notes going on behind him to shine through in all its epic splendor. But aside from these subtle developments, this is an album that sticks to the same formula of fast-paced anthems that defined the bulk of their previous efforts, blurring the lines between a Hollywood blockbuster symphonic soundtrack and elements of folk, power metal and Malmsteen-inspired Neo-classical shredding, culminating in a collection of musical chapters that, in turn, form a highly involved fantasy novel in audio form. 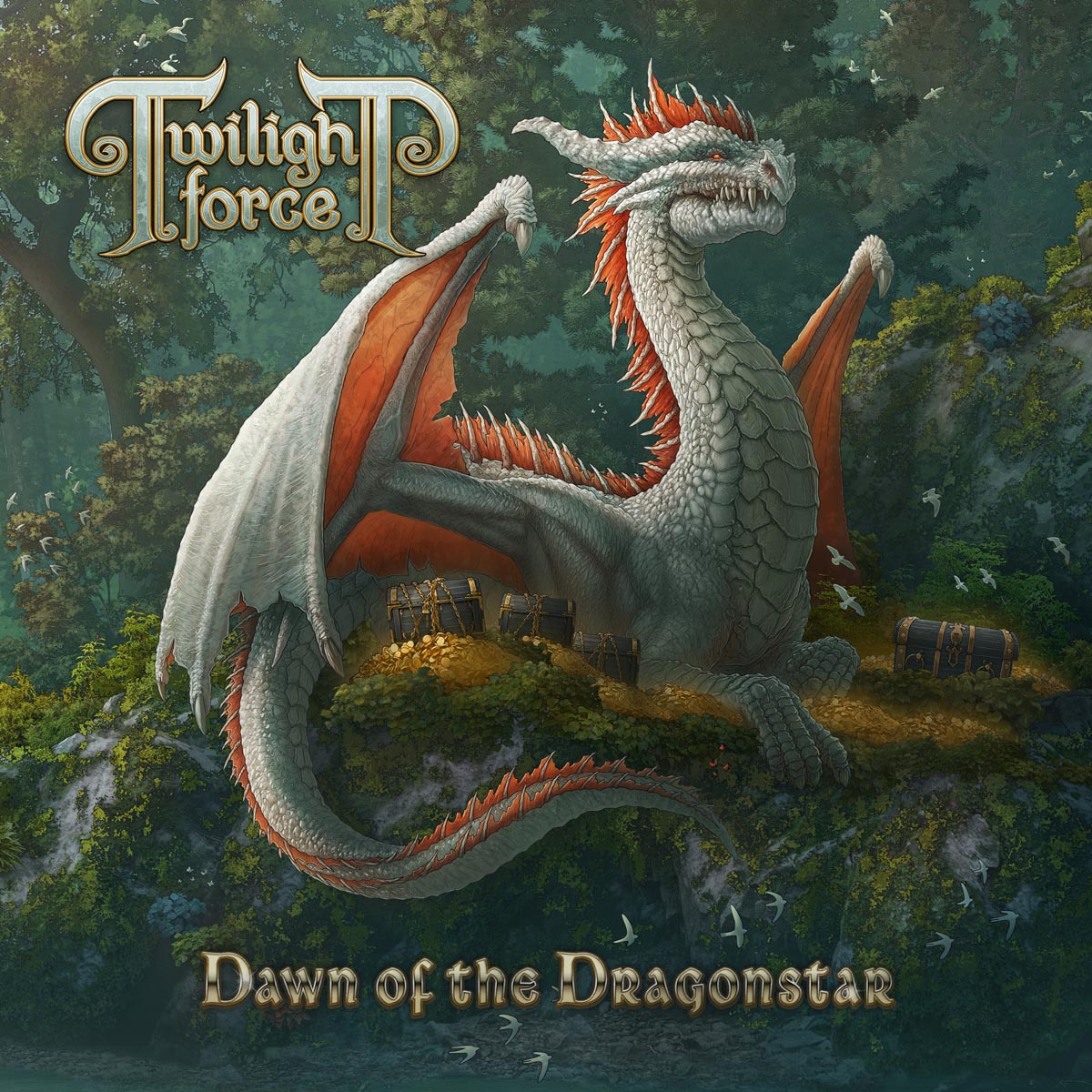 “Dawn Of The Dragonstar” Album Artwork

Precision is the name of the game being played as one song flows into the next, and Twilight Force are playing for keeps. Following a menacing intro with a looming drone from the brass section and a deep stream of words from an unnamed narrator, opener and title song “Dawn Of The Dragonstar” blazes ahead at full speed, wheeling back and forth between a fast-paced gallop and a full blown speed metal assault and taking no prisoners in the process. Similarly relentless and more riff-happy cruisers such as “Queen Of Eternity” and “Hydra” linger a tad bit longer, but embody the same sense of unabashed fanfare in a highly infectious melodic package. Longer and more elaborate anthems such as “With The Light Of A Thousand Suns” and “Winds Of Wisdom” provide a few more structural and stylistic twists, the former veering off into Spanish flamenco territory about halfway through. Yet barring these few occasional twists and a massive epic closer in “Blade Of Immortal Steel” that rivals “Keeper Of The Seven Keys” in how many ideas are thrown in, this is an album that keeps things catchy and accessible in spite of all the noodling solos and exaggerated peripheral elements.

Though they are sure to win zero converts from the darker side of the metal spectrum, nor would they even pretend to be trying to do so, Twilight Force have proven yet again to be one of the premier power metal acts to come raging into the scene in the past decade, no small task considering the loss of their iconic original lead vocalist and an ever-growing pool of competitors. It’s a foregone conclusion that anyone in the metal community that doesn’t have a sweet tooth that is reserved for the most unapologetically happy sounding backs to come out of the power metal wave of the early 2000s will be left with a massive toothache after hearing just one song off this album. Nevertheless, for its intended audience of D&D obsessed nerds, trustees of Renfaire culture and otherwise constant dreamers, this is an album that checks off all the boxes and tosses the assessment form right on top of the hoard where its pet dragon rests. Sharpen up your blades and memorize your spells fellow power metal LARPers, for some of our characters may require boosted stats to survive this grand metallic adventure.

“Dawn Of The Dragonstar” Track-listing:

Adventure is the pursuit of all heroes, but for a younger band of Swedish rogues seeking to conquer the realm of symphonic power, their quest has seen a rather formidable twist in the addition of a well-renowned captain from the Italian scene