The moon makes for a pale and lighter sound.

While some have been wont to dismiss the revival of old school heavy metal that has been making the rounds for the past decade or so, more discerning minds have rightly noted this phenomenon as being less an attempt at reliving the past so much as recapturing it and bringing it into a present context. Though it is easy to note the influences of such popular leaders and early proponents of this craze like Wolf and Ram, what they do is less an act of paying tribute to the icons of the 80s and more along the lines of writing the songs within the same stylistic template that were never given the chance to be written during the sub-genre’s original heyday. It is to this same grand tradition that the Trollhattan-based Trial has bound itself, and it seems like more than just a happy coincidence that so many of this movement’s primary figures hail from the nation of Sweden.

Relative to their contemporaries, this particular quintet draws inspiration more so from the theatrical and more haunting aesthetic originally explored by Mercyful Fate, save that original lead vocalist Linus Johansson was less inclined towards the piercing falsetto wail that became King Diamond’s staple. The years following this band’s third LP “Motherless” saw Johansson exit the fold for the more impact-based, speed thrashing fair of Black Cyclone, thus leaving the band with the massive quandary of finding a suitable replacement. As fate would have it, they would find an even more distinctive helmsman to further bring out the musical theater leanings of their sound in ex-Air Raid front man Arthur W. Andersson, whose lighter and more approach plays well to the latent late 70s rock character of their brand of old school revivalism, a definite plus given the nature of the music that would be explored on their 2021 EP “Sisters Of The Moon.”

Whether the intent was to perform a trial run (no pun intended) with their new vocalist before unleashing a fully fledged studio LP with him, or just to keep their audience engaged after a 4 year studio hiatus, the goods that wind up being delivered here are quite exquisite. Turning back the clock to that transitional era where the 70s became the 80s, Trial has managed to repackage two iconic offerings in Fleetwood Mac’s “Sisters Of The Moon” and Black Sabbath’s “Die Young” and translate them perfectly into the sonic context of the 2020s. The former has been given a heavier and more expansive arrangement that further bolsters its melancholic charm, while Andersson’s more focused vocal display provides a loftier contrast to Stevie Nicks’ more subdued and lounge-oriented original interpretation. Meanwhile, this band’s rendition of the latter comes off as a tad more spacey and nuanced, with the vocals being a tad less forceful and the bluesy lead guitar work being augmented with rich, almost Queen-like harmonies. 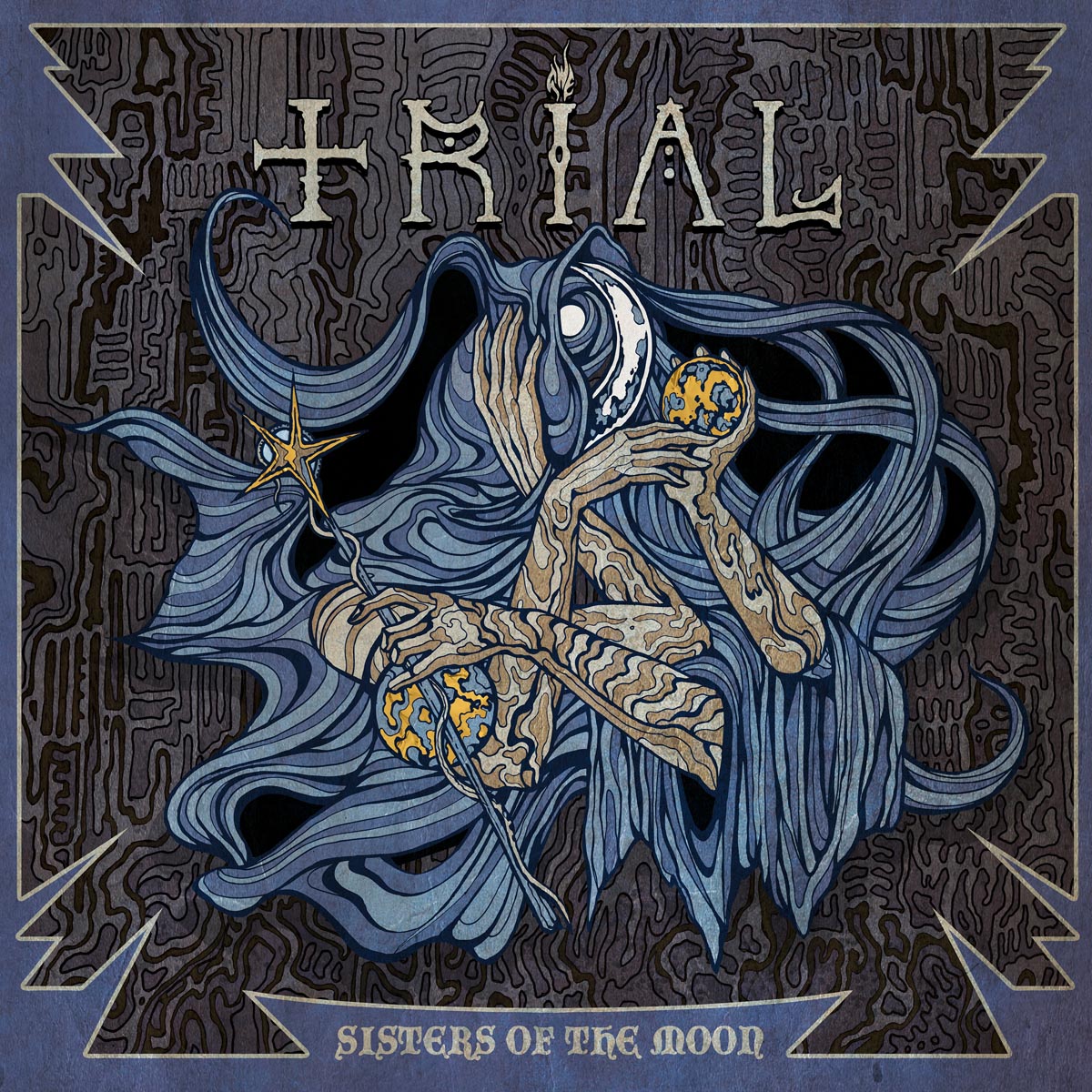 “Sisters Of The Moon” EP Artwork

In essence, this brief EP presents a band that has both adapted two offerings from metal and rock’s distant past and in the case of the title song, improved upon it. Admittedly, the author of this review isn’t a huge fan of Fleetwood Mac, so hearing a metallic rendition of something that was a bit too mellow and subdued for his tastes proved an added bonus. Be this as it may, the rest of the civilized world whom adored the eclectic musical ponderings of Tusk and Rumors will find Trial’s rendition of the song a worthy homage to the original with a more impact-based packaging. By contrast, the reimagining of the previously noted Dio-fronted classic might come off as a tad mellower than the original, if only because there aren’t many voices amongst mortal men that can match the sheer intensity and power of the original. Those seeking a solid performance by the standards of the New Wave of Traditional Heavy Metal will definitely find it here, particularly those fond of the handiwork of Ram, Portrait and In Solitude.

“Sisters Of The Moon” track-listing

Following an almost 4 year hiatus from partaking in the ongoing traditional heavy metal revival, this grand Swedish quintet returns with a new vocalist at the helm with a duo of impressive metallic renditions of two iconic songs.