The troops return to their morbid past.

With the Cavalera brothers continuing to conspire for a modernized take on their craft and the remnant of Sepultura treading a similar path, one can’t help but wonder what happened to that primordial brand of death thrashing mayhem that made the latter an important figure in the early development of extreme metal. Despite their fairly low fidelity recording quality and somewhat immature character, the “Bestial Devastation” EP and the 1986 debut “Morbid Visions” were at least as significant to the death metal scene as were “Seven Churches” and “Reign In Blood.” It was all but a foregone conclusion that with the rise in popularity of the old Brazilian sound thanks to a few key bands in the recent thrash metal revival such as Nervosa, Torture Squad and Claustrofobia that someone in Sepultura’s extensive past would rise to the occasion to revive the mid-80s sound, and that person would be original guitarist and longtime friend of the same band Jario “Tormentor” Guedz.

The resulting outfit dubbed The Troops Of Doom, named for one of the songs off Sepultura’s iconic debut LP no less, proves to be more than just a typical tribute band situation. Drawing upon the impressive well of musicians with the Brazilian scene, Guedz has founded something with a level of competence to match his old band mates at their peak, with the recruitment of former Necromancer (a similarly styled band to Sepultura from the mid-80s that didn’t get beyond the demo stage during said era) drummer Alex Kafer on bass and vocals. Though Alex has been more prolific as a guitarist over the years than he has as a singer, his forceful growl proves equally as formidable to that of Max Cavalera circa 1986, and is likewise accompanied by an impressive battery of drum work courtesy of newcomer Alexandre Oliveira, whose high octane kit work matches the rustic thrashing quality of Igor Cavalera’s early day handiwork with the ferocity of Cannibal Corpse’s Paul Mazurkiewicz.

Nevertheless, as with the lion’s share of death thrash offerings following the style’s development, this beast of a debut EP dubbed “The Rise Of Heresy” lives and dies by the mightiness of its riff work. Barring a short symphonic introduction that precedes the brutality on the album’s opener “Whispering Dead Words”, which is fairly reminiscent of the haunting and horrific theatrical preludes employed by Kreator of late, this album is a no nonsense ride back to the days when death metal was vicious without being rhythmically or tonally convoluted. The four newly composed songs that flow through the first two-thirds of this darkened excursion lean towards the rapid fire chaos that was typical of 35 years ago, to the point where one would be tempted to wonder if Guedz had these songs tucked away going all the way back to his tenure with Sepultura. Each songs stands strong in the old style, but the one slower offering “The Confessional” stands apart with a more haunting melodic scheme to the guitar work, almost like a more extreme reflection of select offerings off Slayer’s “South Of Heaven.” 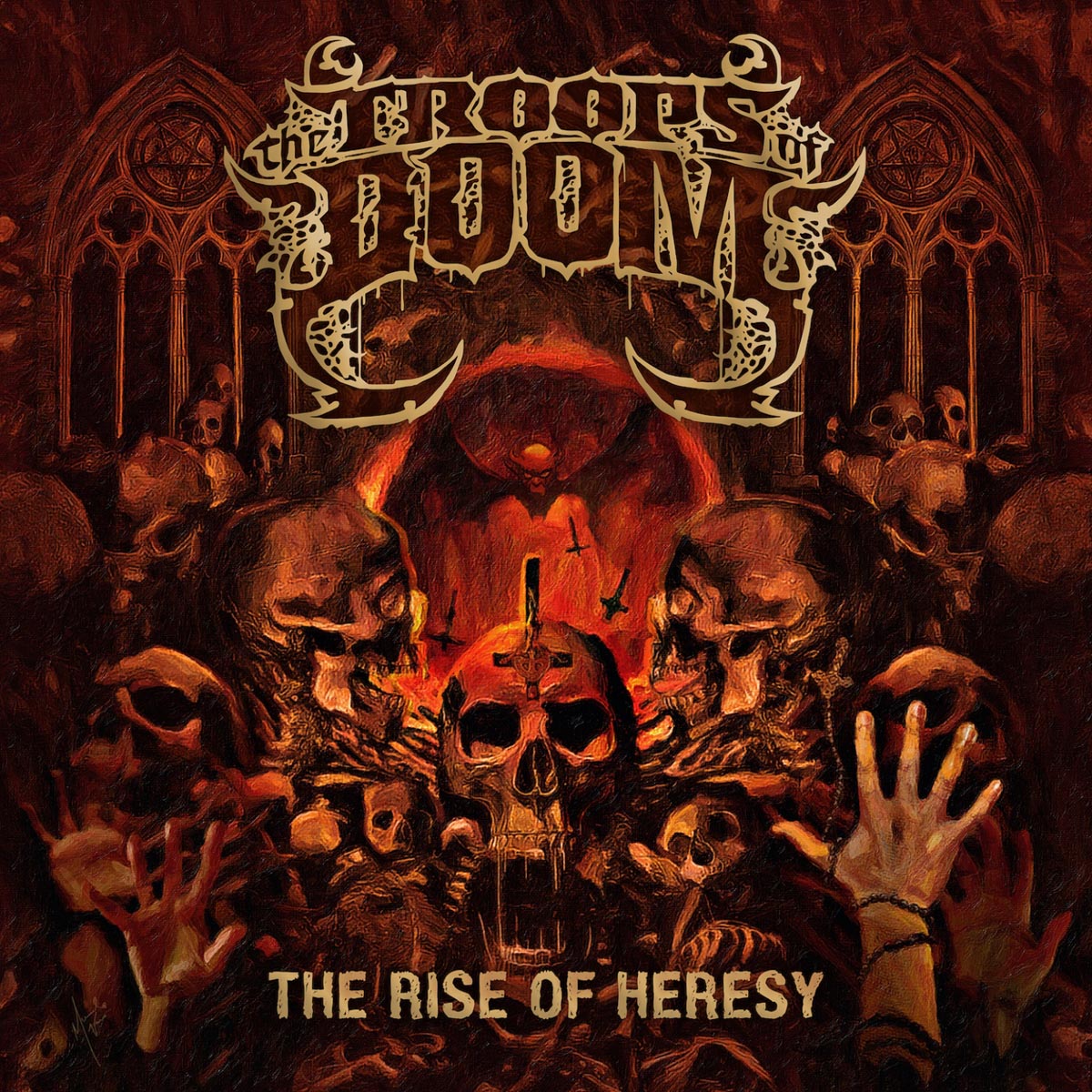 “The Rise Of Heresy” Album Artwork

It was basically a given that a project of this nature would feature some cover work from the original source of inspiration, but the manner in which Jairo and company opted to update the two Sepultura songs featured here is particularly impressive. The amped up sound and ramped up aggression that brings hyper-thrashing classic “Bestial Devastation” into the 2020s is a musical example of what Hollywood repeatedly attempts to do (and mostly fails) every time they try to remake a classic film. Similarly, the first pumping anthem of yesteryear that inspired this outfit’s name “Troops Of Doom” sees a song that pre-empted the archaic brutality of “Scream Bloody Gore” tripled in its level of ferocity while still keeping that old school charm at the fore. That’s the overall story of this band and its work thus far, a brilliant balance between present day largeness and the simpler charms of a bygone era in death metal. To those who’ve been longing for the days when Sepultura used groove sparingly and stuck to the old horror aesthetic, this is what you’ve been waiting for, and hopefully more will be to come in the near future.

“The Rise Of Heresy” track-listing:

A forgotten voice from the days when death metal was barely distinguishable from its thrash forbearers’ archaic sounds, returns with a new battalion of old school slayers to show the world what early Sepultura would have sounded like with a 2020 production.