The Jelly Jam started out in 2002 as some sort of a continuation of a side project which initially was named Platypus and comprised the three current The Jelly Jam members plus keyboards mastermind Derek Sherinian (Alice Cooper/Dream Theater/Black Country Communion). When Derek left Platypus the remaining three musicians Ty Tabor (Kings X), John Myung (Dream Theater) and Rod Morgestein (Dixie Dregs/Winger) decided to forge ahead and changed the band’s name in the process. The trio released its critically-acclaimed, self-titled debut album in 2002 and followed it with “The Jelly Jam 2” in 2004. After a period of time during which the musicians were focused on their day jobs, they resurfaced after a lengthy hiatus with 2011’s “Shall We Descend”. “Profit” is the trio 4th album and probably their most accessible and diverse to date, while at the same time stands as a superb display of classic rock influences blended in together with modern rock sounds and styles. I’ve followed Platypus and The Jelly Jam since day one, and when I saw the album announcement I immediately felt intrigued by the cover (The best one they have come up with), with its dark Baroque style layout and hooded figure holding brass scales, along with the crossed-out play on words, “Prophet”. But as excellent as the cover design is, the real deal here is the music these three guys have created. 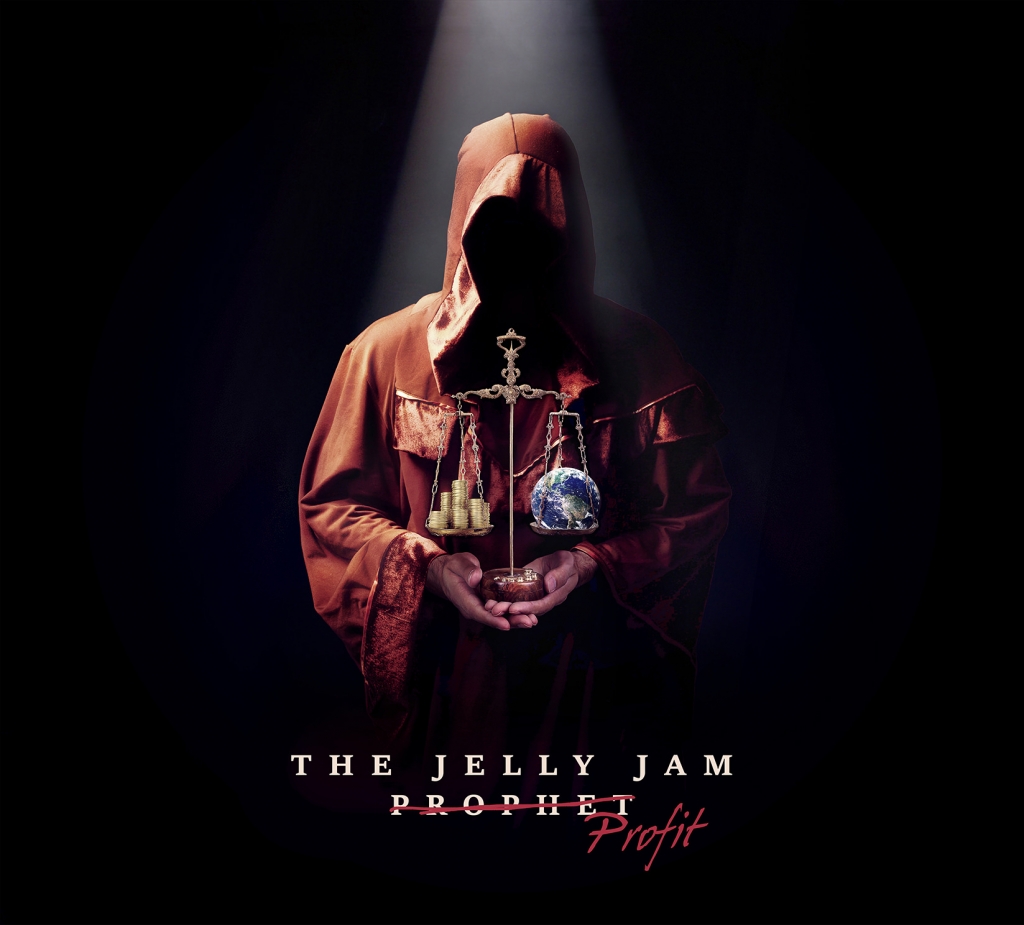 “Profit” is a conceptual album that follows the sojourn of The Prophet, whose mission is to save the world and open the eyes of those who “will not see.” In a press release for “Profit”, Ty Tabor describes the album’s concept as “a fight between progress and jobs at all cost and not thinking about any future payment that are going to have to be made.” Tabor said: “Each Jelly Jam album is very different and we are most definitely discovering new ground. The first album was pretty straight ahead in its nature and vibe. The second album was more about the songwriting and had a very different feel. By the time we got to “Shall We Descend”, we were all at different musical places. It had more of a darker edge to it, but we finally realized that we had tapped in to something that was unique to us. There really is no Jelly Jam ‘sound.’ In order to make “Profit” the strongest album, we recorded a lot of excess music and chose songs that work together towards the general story idea. Musically and sonically we started experimenting a lot further than we had before. It stands on its own as an album beginning to end with a purpose. It’s not just a bunch of songs thrown together. It’s an entire journey through a story.”

Reality is that his description pretty much nails what the album is about. “Profit” is a full blown album experience that takes you on a musical journey showing off the bands versatility as well as keeping the listener captivated from beginning to end. The musical careers of the band members, from an individual standpoint, highlight a collection of diverse influences. From Progressive Metal and Rock, Jazz, Fusion, Hard Rock, Country Rock and Alternative, Myung, Tabor and Morgenstein collectively are a musical giant. However The Jelly Jam’s sonic world is not one of out-of-key vocals, limp-wristed rhythms, and half-hearted production. We’re talking world-class performances all round, delivered with a degree of effortlessness that most musicians could only envy.

Ultimately, though, the album flows organically and focuses completely the quality of the music, the three musos allow their otherworldly chops to take a back seat, serving the song in question at all times. You can tell that Ty Tabor, John Myung and Rod Morgenstein loved every minute of creating this stellar recording. The music has a spacey, alternative vibe that yields to a heavy discourse of distorted guitars at times, and always maintains a sublime and complex musical balance, drawing the listener in with its haunting lyrics and melodies, all splashed with a coating of psychedelia. This 12-tracker is loaded with memorable harmonies and rocking rhythms that will get you into the mood for jamming along with the music. Another fact that makes the album so enjoyable is that the average song here is no more than three minutes in length, which keeps you on the edge, wanting and expecting more awesome jams to rock out to. The album is an immersive experience and needs to be listened to from start to finish as a single statement, soulful in spirit and blissful to every note played.

Highly recommended for fans of The Beatles, early Genesis, Yes and The Who, “Profit” is a concise and powerful musically statement that strikes the perfect blend of complexity and accessibility.