Miracle of miracles, The Flower Kings are back! Yes, Roine Stolt has rejoined forces with Hasse Fröberg and Jonas Reingold to jump back into their world of adventures, filled with flower power and stardust. Along for the ride are newcomers Mirko DeMaio on drums and Zach Kamins on keyboards. Wait… you mean the keyboardist’s name isn’t spelled “B-o-d-i-n”? Although that development may sadden many of the The Flower Kings faithful, remember that this IS prog, and so change we must. More to the point, the word from Mr. Stolt is that after their previous album “Desolation Rose”, the band wasn’t in a particularly inspired state and it seemed unlikely that there would be any reason to reform again in that configuration. Indeed, Hasse Fröberg didn’t expect to get the call at all; he thought the band was going to stay inactive for any foreseeable future. But after a solo project last year under the moniker Roine Stolt’s The Flower King, the call did indeed come and this quintet went out on the road together, focusing on early The Flower Kings material. Shortly after the tour ended there was enough good juju in the revitalized band to inspire writing of new material, and now with Kamins and DeMaio firmly on board, The Flower Kings are back and ready to bestow the miracle of this resurrection with you.

“Waiting for Miracles” is a classic The Flower Kings album. For fans of the early incarnation of the band, there is little reason for this new release not to go down easily and smoothly. First singles “Black Flag” and “Miracles for America” are accurate signposts for what lays within: loads of layered symphonic prog replete with effortless guitar solos, prominent punchy bass and keyboard magnificence as Stolt’s and Froberg’s vocals intertwine. This album seems to be less about taking chances or staking out new territory, but more about celebrating what The Flower Kings do best. And for most fans, that’s reason enough to rejoice. 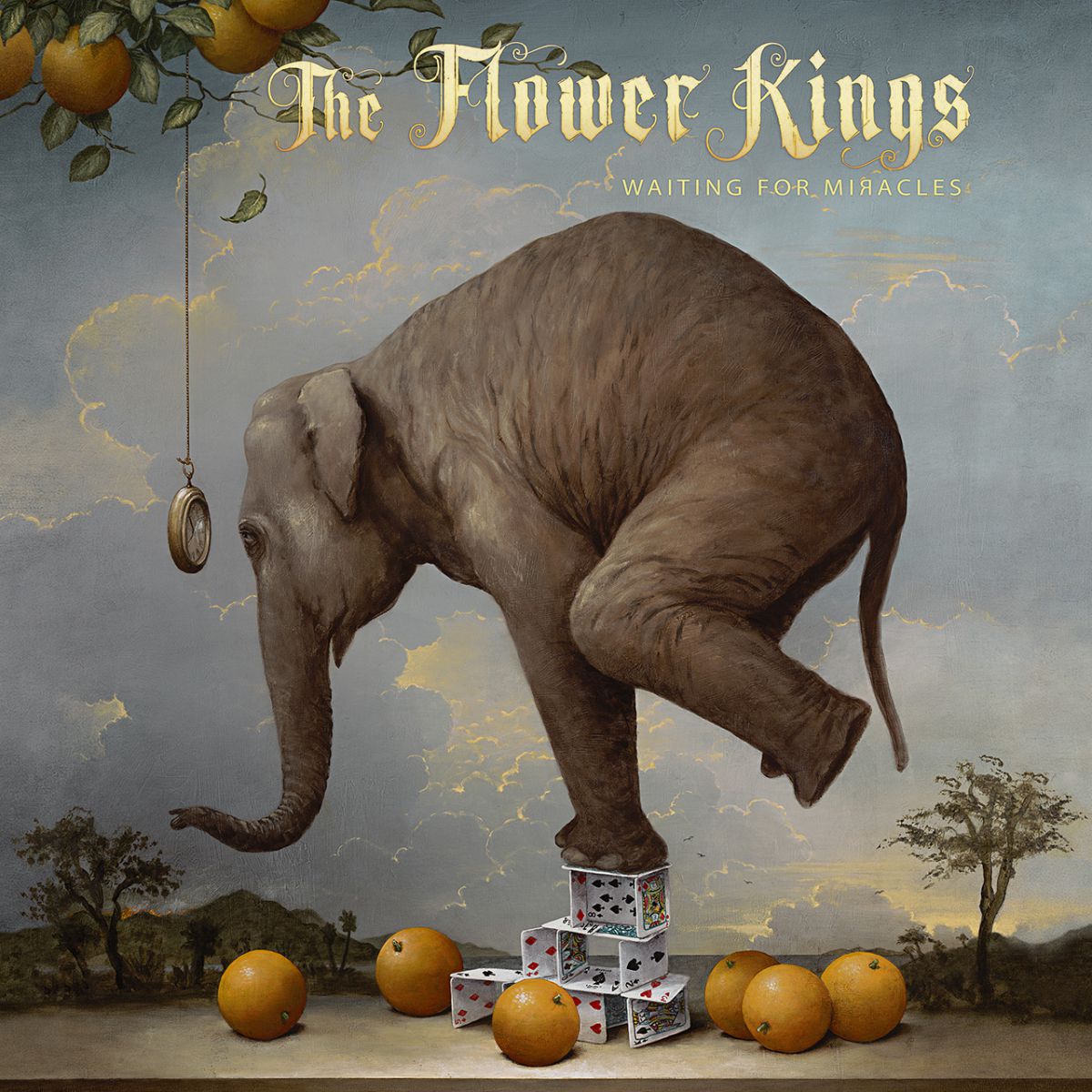 Although we could say that the first two singles are highlights of the album, that would be misleading because the main 10-song disc is impressively consistent. “Vertigo”, the other 10-minute song alongside “Miracles for America”, is simply majestic as the first two  minutes grace us with Reingold’s fretless bass, Kamins’ tastefully inventive range of keyboards and DeMaio’s spacious percussion all before Fröberg comes in with his best vocal delivery of the album. Follow-up “The Bridge” is half-beautiful-ballad and half-guitar-hero-jam. “Ascending to the Stars” is an unexpected symphonic wonder, the soundtrack to a mysterious yet-to-be-released Spielberg sci-fi epic. And with plenty more transcendent Stolt wailing during the bulk of “The Crowning of Greed” and the all-instrumental “The Rebel Circus”, fans of his signature guitar sound are going to be in hog heaven. Not only isn’t there a bad track on this album, but the listener is likely to complete these 64 minutes finding themselves filled with inspiration and gratitude that the band is back. DeMaio is well suited for the Kings drum kit, but it is Kamins who especially dazzles with his command of the keyboard’s capabilities, balancing classic sounds with new delightful twists. Original bassist Michael Stolt also supports on several songs, as Jonas was occasionally not available, which further strengthens the circle of The Flower Kings’ career.

The short second disc can seem somewhat of an afterthought. At an odd 22 minutes, this extra albumside-worth of material is not as consistent as the main album, but these aren’t simply throwaway tracks, either. Only “We Were Always Here” really feels like a fully developed song, but there are plenty of interesting elements to “Spirals” and the seemingly mis-titled “Steampunk” to make The Flower Kings fans want to keep them in their library.

Roine Stolt always has his hands in several projects at once, Jonas is constantly touring with Steve Hackett and involved in any number of other bands, and Hasse has just released an impressive fourth album with his own band Musical Companion. Given all of these other endeavors, it’s notable that they have come together to give another go for the Kings, both in this fine recording and with the many live adventures ahead. In fact, another studio album may already be on the horizon for late next year. No need to wait; the miracles already surround us.

The Flower Kings surprise with a fine new studio album, a soulful return to the sound of their original releases. With three veterans of the band and two inspired newcomers, this collection sounds fresh and familiar at the same time. It’s an encouraging sign for the future trajectory of the band, one which will likely be embraced by the Flower Kings faithful and not a bad entry point for anyone new to this world