Around the globe fans of the legendary US progressive rock act Spock’s Beard cheered with excitement last year after the announcement of the band’s classic lineup joining forces with current members as part of an exclusive performance of their concept album Snow from 2002, which was also the last album to feature Neal Morse as a member of the band. The historic event took place at Neal Morse’s own festival Morsefest, with current vocalist Ted Leonard and at-the-time drummer Jimmy Keegan engrossing the classic lineup of Neal Morse, Alan Morse, Nick D’Virgilio, Ryo Okumoto, and Dave Meros. One of the finest concept records ever recorded and one of the most compelling albums ever committed to disc, Snow – the story of an albino boy who possesses the ability to heal and goes from outsider, to a wonder-boy, to a freak, to a messiah, and back – was the only album the band had never played live by the band due to Neal’s departure after its completion, details that added an special significance for the fans who never got the chance to witness a live performance of the exhilarating musical tour-de-force known as Snow. Fortunately for those that were not able to attend, the milestone spectacle that lit up the Nashville’s night on July 2nd, 2016 will now be released in a variety of formats next November, and it aims to become the ultimate visual presentation of the iconic album.

After this introduction, I will begin with some sort of a disclaimer: I was heavily involved in this release, and I couldn’t be prouder about the role I had. Nonetheless I will do my best to offer you with an unbiased opinion, because at the end that’s the whole purpose of this review: you don’t want a fanboy (I don’t consider myself as such) perspective, but a helpful one. Without further ado…

Describing the spirit which transpires during any Morsefest celebration is a very difficult assignment, even for the most skilled journalist. Whether you are a consummate fan of Neal’s music and/or any of his musical partners, or just simply read about the event and decided it would be cool to attend, you get carried away the moment you go through the main doors of the New Life Fellowship building. There’s some sort of an infectious enthusiasm floating in the air, mostly because it feels like a gathering of old friends, or better put, a very close-knit progressive family reunion. And that is perfectly captured at “Snow Live”: the over-enjoyment of the crowd, waving their hands in the air the moment the first chord played by Neal on his acoustic guitar is only matched by the smiling faces of the musicians themselves. I’m not gonna try to describe the music or the video in full details, I believe that if you enjoy progressive rock to any extent, this is a release that merits your full attention seated in front of your TV for the complete duration of it. Instead I will focus in giving you an overall idea of what you will lay your hands on, if you already bought or will buy this set. 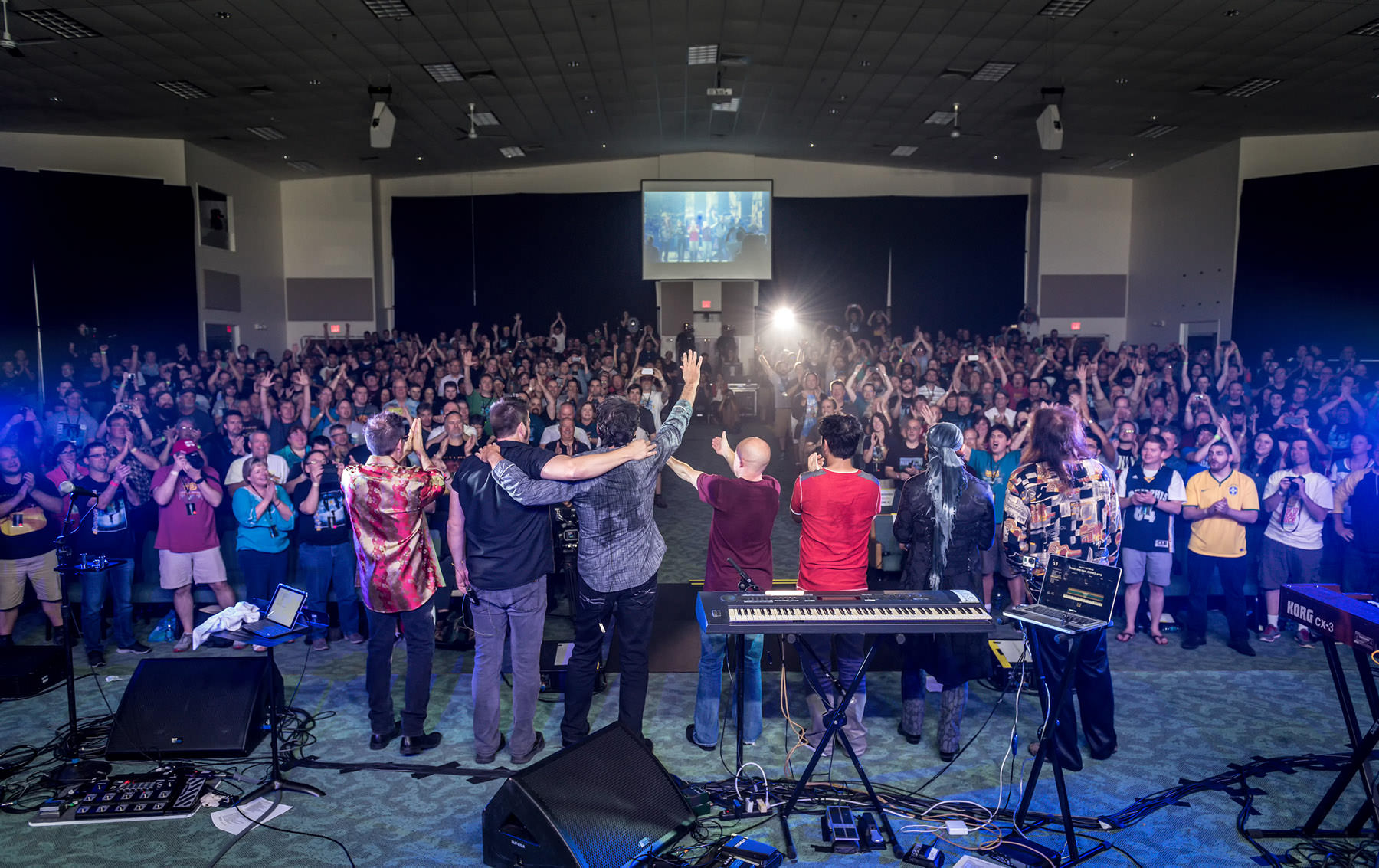 If the video production for Morsefest 2015 was an excellent one (you can read my review of that set here), Snow Live has been taken to completely new heights. The unusual video wall divided in sections and constantly displaying animated backdrops skillfully themed to each song, was once again created by one of the most talented video artists I’ve met in my life (one I am proud to call my friend) the one Christian Rios. His masterful and seamless selections of images wrap the visual experience in some sort of surreal aura, without distracting your attention from the action on stage. The lighting show put together by Ryan Proplesch was wonderful, and allowed me to score some of my most cherished pictures effortlessly, and as a live photographer that’s sometimes you don’t often stumble upon. And then there’s the camera and video edition work. Thad Kesten, Scott Henry, and their team went above and beyond any possible expectations, to the point that even when I was there for the complete duration of the rehearsals and during that memorable night, I have found myself at times surprised now with some of the angles captured. They also mixed the live footage with other song-related images and used superimpossed overlays to add additional effects. There’s also abundance of audience moments, skillfully sprinkled throughout, giving the most rounded sensation of what was like to be there. Should I have to describe it in one word I would say: magnificent. After watching the Blu Ray for last year’s Morsefest I thought “these guys did a superb job, and this can be the perfect example of how a live event should be captured”. Now I’m happy to revise that statement and give “Snow Live” this achievement. If you are a musician and you are reading this, now you know who you should be working with if the idea of a live release ever crosses your mind. Christian, Thad, Scott, you have have outdone yourselves. Bravo!

Obviously, no live recording is completed without a great companion audio. But in this department, I don’t think Spock’s Beard has ever lacked a bit, and the Rich Mouser mix is, once again, breathtaking. The original Snow studio recording always sounded fantastic. How is possible that Rich managed to achieve an even fuller, more dynamic and richer sound in a live recording? Well, that escapes me, but I can certainly say I prefer Snow Live and I can anticipate myself listening to that vinyl a lot more than the studio version. Fear not, it will blow your speakers off if you play it too loud, but I guess that’s the whole point, isn’t it?

The first disc in the DVD and the Blu Ray covers all the songs from “Made Alive” to “Carie”, while the second DVD/Blu Ray begins with “Looking for Answers” reaching the end of the original Snow album and includes “June” and the first ever live rendition of “Falling for Forever” as encores. The presentation is completely flawless, every note, every melody is played impeccably and fully showcases all the seven men in stage working in full synergy, in a complete single-entity mode, offering timeless crafted music in a creatively and expressively fashion, and engaging the euphoric audience and the viewer/listener in a rollercoaster journey through deeply emotional musical passages. There are many “highlights” moments through the set, and if you were there you will remember and most likely have your own personal selections, and this is a very subjective matter where opinions differ from one soul to another. Some of my favorites are Nick D’Virgilio full blown hip-hop impersonation for “Welcome to NYC” (moment in which he’s wearing a necklace with a cross I had given him as a gift the night before), Ted Leonard’s octane-packed explosion of energy during “The Devil’s Got My Throat” with the red lights painting some devilish shadows upon his face, Jimmy Keegan’s Hollywood-worthy rendition for “Freak Boy” where he slithers across the stage to later descend through the main aisle and end up climbing over my wife’s chair (on a curious note he completely improvised that part, it wasn’t rehearsed that way, and my wife remembers she had to hold his left leg in an effort to help him to remain steady), Ryo’s extravaganza during his keytar solo, walking around the fans and ending in a duel with Alan Morse both kneeling down in the front, and the epic climax of “Wind at My Back”, first with Neal consumed by emotion and singing while tears came from his eyes, and later Nick D’Virgilio joining him and walking towards the farthest seating area while jumping, and dancing over the uplifting chorus while Jimmy Keegan blast the drums in an passion-laden finale.

Probably my favorite moment of the show comes at the end, when in the second encore, right after “June” the mind-blowing “Falling for Forever” made its live debut. It gives me goosebumps every time I reach that part of the show, that tracks sum up perfectly the essence of what Spock’s Beard has always been about: a long and complex piece with a broad pallet of sound, lots of glorious vocal harmonies boasting beautiful performances from all 3 lead singers trading verses back and forth, a kicking brass section, attacking keyboards layers, glasses full of melodic guitars, and all the above underpinned by some severe drumming. Jimmy and Nick starred in an uncommon and hilarious drum duel that ends up with them exchanging blast beats in the floor while the fans cheer of amusement, and the track concludes with Ted, Nick, and Neal singing the final chorus with Ted taking the lead. 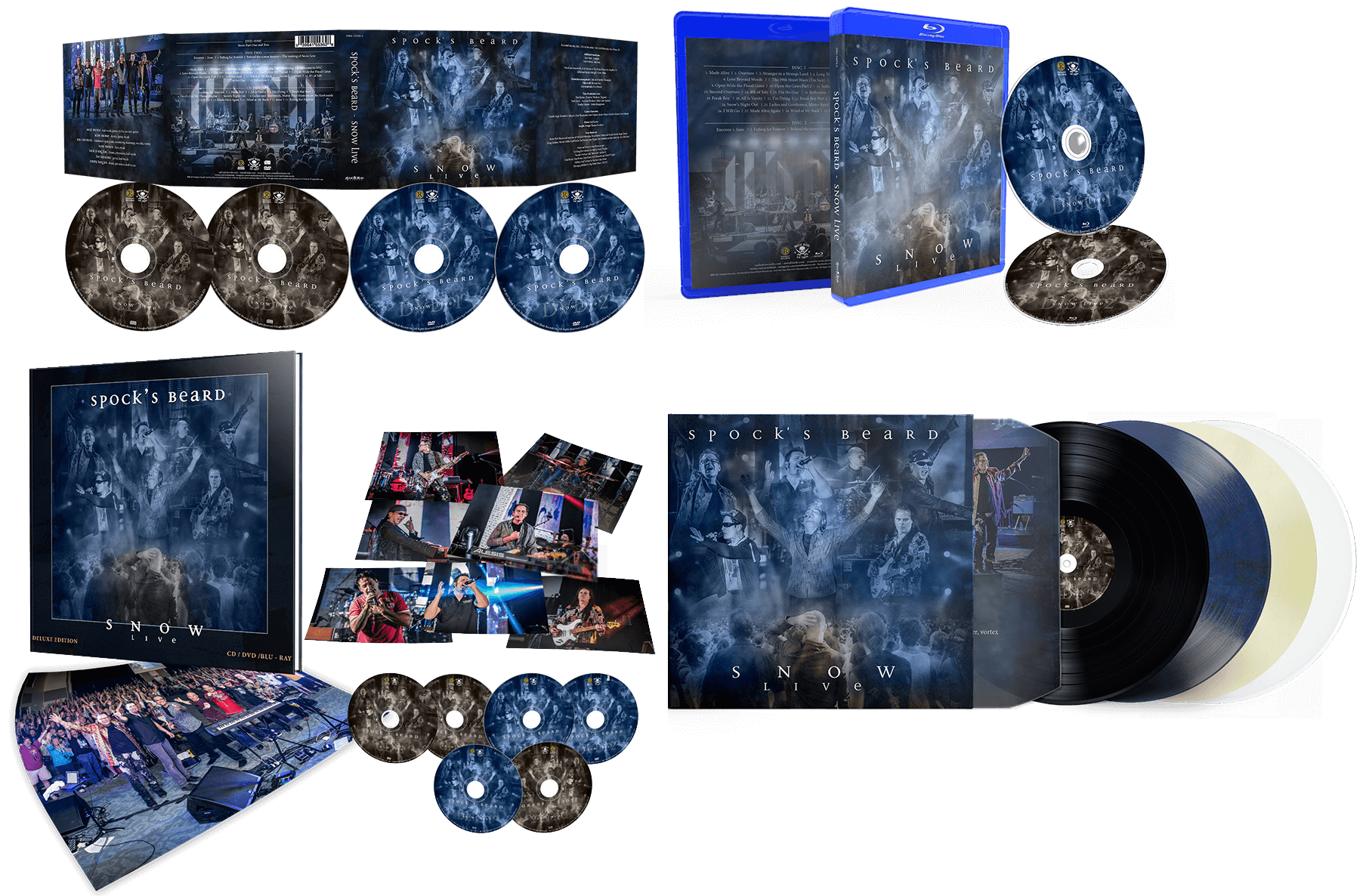 In both, the second DVD and Blu Ray there’s a one hour and 5 minutes long making-of type documentary, a mixture of intertwined footage from the recording of the original Snow album with more recent interviews with Neal, Dave, Ted and excerpts from the Questions and Answers sessions held before the show (Fun note: Three of the questions captured on camera were made by my Brazilian friend and big Neal Morse and Spock’s Beard fan, Daniel Levy). Time is a strange thing, and even after so many years, looking back on Neal’s departure brings emotions to the surface, yet you can easily see how much respect and admiration they profess one to another, even when answering the fan’s questions. Snow was an album which came to life overcoming a myriad of challenges and was followed by even bigger life changes. Recreating it many years later was a huge undertaking surrounded by contradictory emotions, but every single band-member involved, including Jimmy and Ted who weren’t at that time in the band, had a brilliant time doing it and their joy is reflected in the interviews. And you’ll get to enjoy a very particular moment when Ryo Okumoto leads a Japanese battle cry ritual backstage, just before the beginning of the show, when all the Beards join their right hands fists in a circle, he mumbles some words in the language of the land of the rising sun, and all of them cheer back “Banzai!” three times. Does it get any better than that?

Elaborate and spectacularly executed “Snow Live” marks the realization of a dream for thousands of fans who waited for years, hoping for a proper live show of the band’s first and only full-blown concept album; and is the sort of live album accomplishment that most musicians can only dream of. The touchstones of the glorious vocal harmonies, the moody pomp, and the machine-gun arpeggios and jagged time-shifts will make admirers of progressive rock shake their heads in wonder at its fullness, its completeness, and its passion.

Due on November 10th via Radiant Records and Metal Blade, this piece of progressive rock history can be pre-ordered here and will be available in several formats detailed below. The cover artwork for all the editions but the Artbook, was once again created by Neal and Spock’s Beard long time designer and collaborator Thomas Ewenhard and depicts the essence of the live event perfectly. Yours truly was asked to oversee and bring to life the design of the 50 pages Special Deluxe Edition Artbook, and I can say it’s been one of the most fulfilling projects I’ve worked on, and one I’m extremely proud of and thankful for.

CD ONE – Snow Part One

DVD ONE / BLU RAY ONE

Behind the Scenes Feature – “The Making of Snow Live”