For all the implicit imagery of skeletons and the common idiom of them dwelling in a person’s closet signifying an embarrassing fact of one’s past, there is absolutely nothing shameful about the brazenly retro sonic assault that Skull Pit brings to the table. Born as a collaborative effort between Tokyo based bassist Tatsu Mikami and New York resident and vocal extraordinaire Mem Von Stein (no other musicians listed, despite the guitars and drums being about as real as reality itself), the stated musical mission here is about as one-dimensional as they come. Even when compared to the still ongoing retro-heavy metal craze that has brought us all the likes of White Wizzard and Striker, the picture that is painted on this project’s eponymous debut stands as a mere black canvas with no brushwork present.

As if the name itself were not a dead giveaway, the sound presented here betrays an obsession with the darkest elements of the NWOBHM and early heavy metal in general that fed directly into the eventual thrash metal style. The likes of Motorhead, Venom and Satan are some of those dangerous players in the early 80s that had the moral panic crowd quaking at their pulpits about the fall of western civilization that receive homage on this collection of fast-paced, nasty, yet largely rock-based killers. Though Stein’s nasty, nasally snarls and mutterings like a twisted cousin of Blitz Ellsworth are a key component in this band’s formula, Mikami’s raunchy as hell bass work is the chief attraction, merging the distorted ugliness of Lemmy Kilmister’s signature sound and throwing in almost enough technique to pass for Cliff Burton at times.

Much of the riff happy crushers that adorn this relatively short album are cut from a proto-thrashing speed metal mold, amped up a bit by modern studio tools to create a far more compressed sound that fits in well with present day practices in spite of the throwback nature of the style. On the outer fringes of this maddened opus are such cookers as “Soul Raiders” and “Wolf Spirit”, both of which feature frenetic riff work that reminds heavily of the exaggerated take on the work of Nasty Savage and Diamond Head that Metallica used as their template for Kill ‘Em All. However, the most memorable speed metal crusher to be found on here is the crack-cocaine infused homage to Motorhead at their most intense “Marauders”, which sees Mikami slaughtering his bass strings for a full four minutes straight. 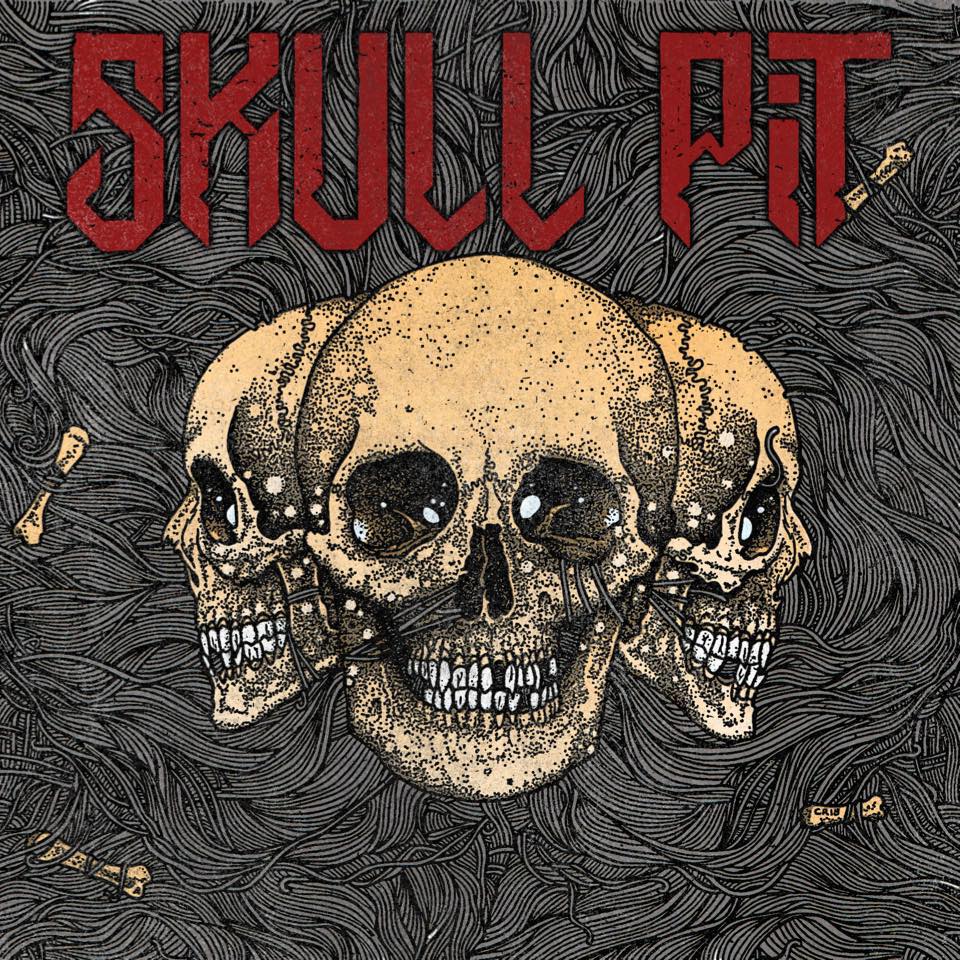 As hard as it may be to believe, there are times where this outfit decides to tone things down a bit rather than going into all out Slayer mode and simply cooking from start to finish. Naturally Skull Pit’s version of a slower song is still fairly fast, largely following the more retro-rocking characteristic of Motorhead and a number of early 80s entries from the NWOBHM. Nevertheless, generally groove based songs such as “Fire Breather” and “The Line” spare no expense in the auditory carnage department, the latter actually seeing the bass work going into full on Carnivore territory to the point that some may well visit Peter Steele’s grave just to make sure that he’s still in there. Note should also be made of the swinging good times of “Blood Titan” , which actually listens like a twisted, Venom-infused take on a Deep Purple song.

This is simple music for people with very simple tastes, most of them donning the uniform of green, black and red that Blitz Ellsworth affectionately refers to as his friends. Granted, this isn’t thrash metal in its proper sense, but more so the twisted, decrepit root from which it sprang forth, protruding out of the ground like an undead vine and accomplishing Lemmy’s lifelong ambition of killing off everybody’s lawn. Those who are looking for eclectic musical gimmicks and deep contemplative lyrics need to look elsewhere, but for the rabid carnivore out there who simply wants a proper steak serviced up bloody with a cold beer, Skull Pit is both the chef and the waiter that’ll get it from the kitchen to your plate

Living in the past is about all that can be expected for a pit full of skulls, but this particular pile of dry bones comes with all the essential metal grafting to be formidable on the present battle field