“Nobody gave you the tools to connect the dots to the God inside of you.” If you’re looking for a soundtrack to connect the dots, you just may want to pick the new album from Simon Collins. In this case, it helps if you like electronic beats with your rock-infused spiritual journey. Collins, of course, is the first born son of legendary icon Phil Collins. And like his dad, Simon not only excels behind the drum kit but also has a knack for melody and the vocal cords to deliver them. While this is his fourth solo album, it’s been 12 years since his last one and unquestionably this is his most ambitious outing yet. However, if fans are hoping for a continuation of his Sound of Contact project – which released a celebrated debut in 2013 – the approach of “Becoming Human”’s production may or may not be what they were expecting. Let’s explore further what it means to become human.

At its core, the new album represents a spiritual rebirth after having waded through strife, addictions, and shame. Several of the songs are deeply personal to Collins’ own life, creating an intimacy and connection to his journey. There are plenty of ruminations on the deeper aspects of existence, as the title track so beautifully exemplifies, its video electrifying the Tree of Life as the verses connect those aforementioned dots. “The Universe Inside of Me” embodies this spirituality as “I go inside to reach a higher power.” But it is a dark journey. Repeatedly Collins sings of the struggle to see clearly, the challenges and denial along the way. “When you’re guilty, it’s the mess you make. When you’re shamed, you feel that you’re a mistake.”  A song like “Thoughts Become Matter” is both an empowering tribute to the powers of manifestation and a devastating memory at the same time as Collins exclaims, “all the shit you fed me while you raped me.” Likewise this fight plays out in “This Is The Time” which triumphantly proclaims the breakthrough at hand, yet sets the stage with “I walk around with a black hole inside.” This dichotomy of dark struggle and hard-won revelation repeats throughout the album, though it’s hard to say which sides wins out. The lengthy closing track “Dead Ends” doesn’t bode well in that regard.

Musically-speaking, “Becoming Human” is a sleek, modern recording which would often be at home in a hip rave dance club. Whereas the Sound of Contact album welcomed a certain realm of organic beingness, offering more lush keys and traditional rock instrumentation, for his new solo outing Collins has frequently turned towards modern electronics, sequencing and even industrial sounds. You can hear the same core song structure is still in place underneath: “So Real” and “I Will Be Waiting” don’t vary too far from the form of SOC’s “Pale Blue Dot”, for example. But the difference in production is striking. A percussive attack is at the forefront on most of the song arrangements, which is appropriate given Collins’ skills, adding to the intensity of the material at hand. But it can be hard discerning where the drum kit stops and the electronics start. 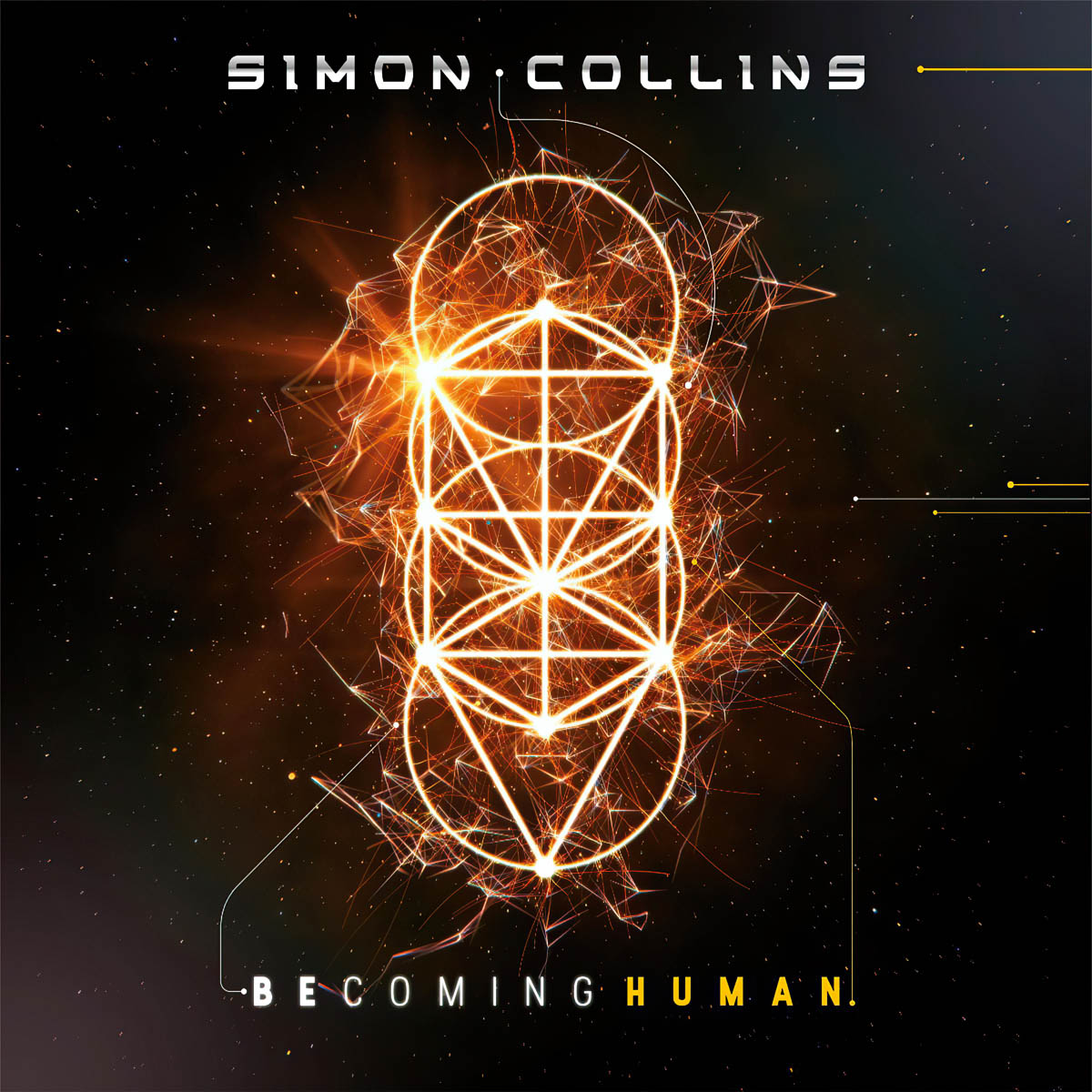 To realize his ambitions in this unique production approach, Collins enlisted Robbie Bronnimann who is credited with keys, programming and most importantly: sound design. The result progresses beyond the boundaries of where a traditional rock album would go. It’s not all hard-hitting, though: a few ambient moments sneak in, like the beautiful intro of “I Will Be Waiting” and a breather in the second half of “Universe Inside of Me.” There is nary a guitar solo in sight, opting instead for layered textures and ringing arpeggios. Occasionally this feels like a missed opportunity, such as in the middle of “Living In Silence” when Collins’ voice powerfully climbs to sing, “…she will never be the same…” A guitar-hero solo coming out of his held vocal note would have taken the song to the next level, but instead the arrangement chooses to simply return to the programmed synth chord progression. Still, the fruits of this approach reveals an album that sounds uniquely original, while still retaining Collins’ warm vocals and songwriting skills. The electronics aren’t completely surprising either, given that Collins started his solo career in this territory, also having been a DJ himself in his 20s. But if his third album “U Catastrophe” took a harder turn towards rock, “Becoming Human” clearly brings him back to a more futuristic approach.

Given Collins’ innate talent for catchy melodies, the good news is that there is plenty of substance at the foundation of the songs presented here, and more than one shot at a “hit single.” Alternating between painful psychological introspection and spiritual depth while being encased in pulsing beats and percussive attack, the material is not always an easy listen. But taken as a whole, Collins has recorded an impressive collection which deserves to find its audience.

A natural-born talent on drum kit, vocals and songwriting, Simon Collins proves he is his own man with a collection of songs which touch on emotional catharsis and spiritual rebirth. With “Becoming Human”, Collins achieves the impressive feat of embodying the talents his father innately passed on to him while forging a sound uniquely his own.