A live album’s potential for success is rooted in an enthusiastic audience and an even more enthusiastic band. Septicflesh has both of those bases thoroughly covered in their upcoming live album “Infernus Sinfonica MMXIX,” but the genre veterans have upped the ante with an undeniably impressive cast of artists who help bring symphonic death metal to life with rarely captured grandeur. Filmed and recorded in February 2019 at a sold-out show in Mexico City, Septicflesh was joined onstage by a full symphony composed of more than one hundred musicians in addition to two local choirs. Becoming engrossed in a live album is a product of the careful balance between the musicians and the crowd they are meant to entertain, but “Infernus Sinfonica MMXIX” takes this immersion to the next level. Stunning production value ensures that the album shows a clear balance between the on-stage orchestrations, Septicflesh and their enthusiastic delivery, and the echoing fanfare ready to greet them so that listeners far in the future can tangibly grasp the magic of that night.

Hearing cacophonous cheers rise above the opening notes of a live symphony is enough to captivate any listener before Septicflesh even takes to the stage. Meshing thunderous applause and unrestrained howls with the ominous threads of classical music creates a clear picture of the enthusiasm for not just brutality, but for the full artistic scope of Septicflesh’s compositions. This album draws from their discography of 2008 and onward, balancing their set-list choices relatively evenly between the four full-length pieces they have released since then. While touching on a broad range of songs, some of the most enthusiastic responses include both “The Vampire From Nazareth” and fan-favorite “Anubis.” The former is one of the brightest points in the fifteen song set, nestled right at the midpoint of the show. Vocalist Seth Siro Anton effortlessly engages with the crowd throughout the set, though the rising anticipation for “The Vampire From Nazareth” perfectly captures the spark between artists and fans as they call out the song’s title as a ghostly choir mounts in the background. 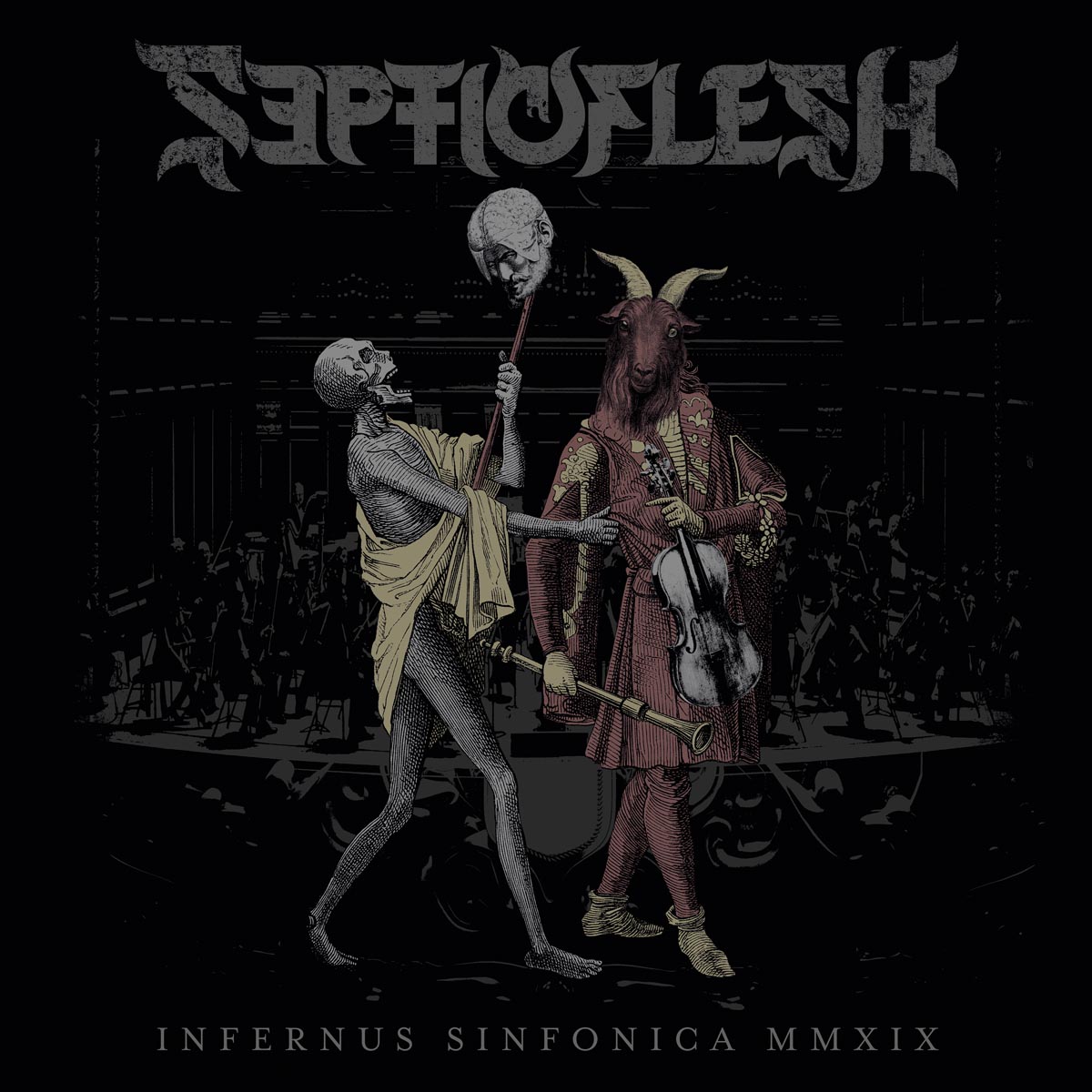 With such delicate moments as a choir in “The Vampire From Nazareth” audible alongside Kerim “Krimh” Lechner’s aggressive percussion, similarly displayed in “Portrait of a Headless Man,” is palpable that “Infernus Sinfonica MMXIX” was produced with the utmost care to balance between the nuance of cohesive musicianship and the magic of the live environment. “Dante’s Inferno” captures the raw power of a symphony in perfect sync without sacrificing the brutality of Christos Antoniou’s guitar-driven hellfire. Vocal interjections meld with a swelling sea of strings, Anton’s throaty screams a fitting complement to the ceaseless power of groaning cellos. Septicflesh’s discography more than proves their undying commitment to creating symphonic death metal that is as vividly evocative as it is extreme, which “Persepolis” demonstrates in bright contrast. The unmistakable imagery of a symphony dressed in sharp monochrome and guided by a stiff-postured conductor is offset against a harsh wall of blast beats, but their uniquely fruitful union is one which Mexico City bore witness to in all of its splendor.

Between a successful choice in final mix and just enough genuine banter with the crowd to prove immersive, “Infernus Sinfonica MMXIX” shows its colors as a recording which captured a night to remember. Decades of experience as musicians and performers are apparent in airtight musicianship alongside audience engagement, and the record ensures Septicflesh have a fitting live album for their long-lasting brand of musical brutality. From the rolling depths of an enthusiastic orchestra to the touching notes of an almost angelic choir, the brightest moments of a live ensemble elevate this live album from enjoyable to something worth remembering.

A night of beauty and brutality is expertly captured in “Infernus Sinfonica MMXIX,” a live album which sees the unique vision of symphonic death metallers Septicflesh brought to life and preserved for a fitting showcase of their powerful creativity.