The plague years have not been kind.

The rough, post-industrial landscape of Detroit would seem a fertile breeding ground for the sort of ugly death thrashing mayhem that came roaring out of 1980s Chicago courtesy of trailblazer Paul Speckmann, but until fairly recently the pickings have been fairly slim in said locale. To be fair, the German-influenced extreme thrashers Nocturnal Fear got out pretty far ahead of the New Wave Of Thrash Metal and fielded a number of top notch studio offerings over the span of about a decade, but prior to the past 20 years it was rare to encounter any thrash metal in the Motor City beyond a smattering of demos. This unfortunate state appears to be changing of late with a number of up and comer acts such as Hate Unbound and the ascendant death/thrashers Plague Years carving out a groovy, hard-hitting niche within the broader Midwestern sound.

For their part, the de facto quintet that is Plague Years (they’ve relied on exclusively live musicians to fill the 2nd guitar slot for the past couple years) has been on a consistent streak, releasing a solid eponymous EP and their debut LP “Unholy Infestation” in 2017 and 2018 respectively. The resulting sound exhibited on these previous studio outings could be best described as a compromise between old school and modern death/thrash, often shifting between influences reaching as far back as the late 80s and a more recent hodgepodge of groove metal and death ‘n’ roll elements within singular songs, and it returns in full force on their sophomore go-around “Circle Of Darkness.” It has a distinctly familiar sound to anyone in the know about the ongoing career of Wisconsin’s own Jungle Rot, as well as the older and less brutal styling of Master, which makes a strong degree of sense given the geographical proximity of both bands to Michigan.

Despite striking the ears with a blatantly modern production sound and having some fairly clear hardcore elements smacking the listener right upside the head, there are times where these songs almost sound like they could have been written back in the early 1990s. The pulsating thrash riffing mayhem of “Witness Hell” and title track “Circle Of Darkness” could almost be pure retreads of seminal offerings out of the Scott Burns days of Cancer and Sepultura minus the occasional breakdown into groovier territory, and even though vocalist Tim Englehardt has more of a hardcore shtick going to his grunts and yells, he’ll occasionally morph into a full blown throwback to that classic Schuldiner growl from the days of Death’s “Leprosy.” Likewise, the strategic employment of creepy keyboard lines and dreary atmospheric passages on pounding slower and longer offerings like “Eternal Fire” and “Urge To Kill” showcase more of a 1990-92 inclination than one might expect from a modern act. 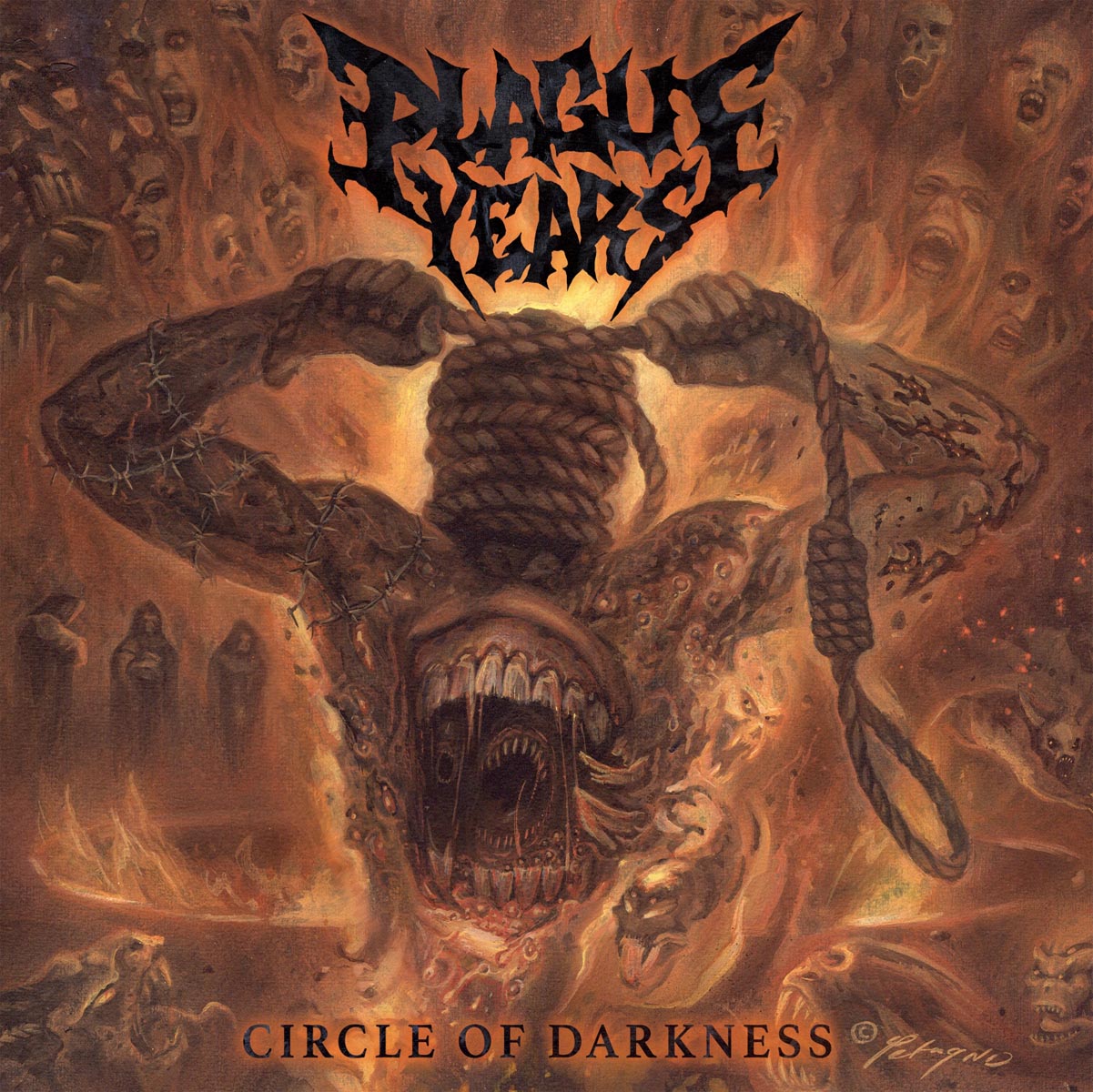 If there is one consequential element in this collective fold that truly gives this band’s sound more of a retro fell, it would be the work of guitarist Eric Lauder, who pulls both rhythm and lead duty in the studio. The riff work that he brings to the table exudes a busier mode of thrashing that is as much indicative of a vintage Bay Area sound as it is those occasional interludes into the slower stomping ground of Entombed and occasional flourishes of Exhorder, particularly in the case of the cruising fury of “Nrftl” and the riveting opener “Play The Victim”. But the signature, Slayer-influence lead guitar work that he brings to the party is where things really get interesting, as each song on here is peppered with short to semi-long passages of chaotic shredding that screams 1990s death/thrash like it’s going out of style yet again. There isn’t a song on here that doesn’t benefit from a well placed whammy bar dive or flurry of notes, though the highlight would have to be “Paradox Of Death”, specifically for the brilliant intro passage that sounds like a direct homage to “South Of Heaven.”

While some have been continuing to write eulogies for the still ongoing thrash revival since the early 2010s, albums like these are the ones that teach all the naysayers that the style can be kept fresh while still cleaving to its early roots. It definitely comes with a strong crossover element along with the vintage death/thrash trappings that will likely appeal heavily to fans of Power Trip (R.I.P. Riley Gale) and Ringworm, but its chief audience will likely be old school death/thrash enthusiasts who have continued to gorge themselves on the various projects helmed by Paul Speckmann and Rogga Johansson. It doesn’t fall completely into any one of the aforementioned camps, but it definitely leans a tad closer to the old school approach, particularly when compared to fellow Detroiters Hate Unbound. In a scene where one either goes retro or modern, it doesn’t necessarily amount to having your cake and eating it too by having both.

Though hailing from a part of the American upper Midwest not known for its prolific thrash metal scene, this quartet of hardened Detroiters have put together a formidable hybrid work of classic death/thrash and modern hardcore that packs a punch.