Dripping with their trademark melancholy, Novembers Doom continue to spread sorrow with their eleventh studio album, titled “Nephilim Grove.” 30 years of experience in the genre are put to good use in an opus that ties together the trademark hollow misery of doom fueled by the hostile fire of death at its core. Varied songwriting hints at a more melodic inspiration crafted with a progressive atmosphere in mind, and makes for an emotionally evocative album that calls on the audience not just to listen, but to truly feel. As a longstanding pillar of the American doom metal scene, Novembers Doom delivers magnificence that proves time is not always a death sentence for bands, and may instead be an opportunity for improvement. It is time indeed that has allowed Novembers Doom to grow in ambition, with an album that continues to drape their shroud of darkness across an increasingly broad sphere of influence.

“Nephilim Grove” draws not just from the well-read playbooks of death and doom, but pulls also from more progressive and melodic influences. Bright and exploratory passages of vibrant guitar solos illuminate otherwise funerary elements with intricately woven instrumental layering. Imploring the listener to allow sadness to consume their souls is fifth track “Adagio,” an intoxicating mix of sorrow and anger reflected in an anguished vocal ebb and flow. Clean vocals lament in a remorseful chorus leaning on mellow bass lines, just to be violently torn apart by the sharpened edge of tightly honed growls. A peaceful interlude allows for an inquiring guitar solo to bridge the gap between the sadness and rage, providing respite from what would otherwise prove to be suffocating. This tempered emotional involvement is not limited to “Adagio;” the entire album shows the potential to invoke incredible emotions in listeners, but has the wisdom of restraint that allows for windows of relief.

Progressive elements shine through as brief delicacies in an otherwise heavy mix, highlighting the more refined technical capabilities of guitarists Lawrence Roberts and Vito Marchese that would otherwise drown in pure doom. Such a balanced sound is achieved at the expert hands of Dan Swano, responsible for mixing and mastering “Nephilim Grove.” Despite Swano’s prior work as a producer for acclaimed acts such as Opeth, it is clear that he tackled the album with a deep understanding of Novembers Doom’s vision, rather than a purely methodical expertise. This is a heavy, unforgiving album that seeks to marry the blackened atmosphere of doom metal with the never-ending ferocity of death metal in a fight to break free from the boundaries of either genre alone. Instruments and vocals are an incessant tide, pulling and pushing against one another in unparalleled harmony. Such unity between stylistic goals and musician’s capabilities allow “Nephilim Grove” to develop an entirely encompassing atmosphere that descends as a pervasive fog of aggressive gloom. 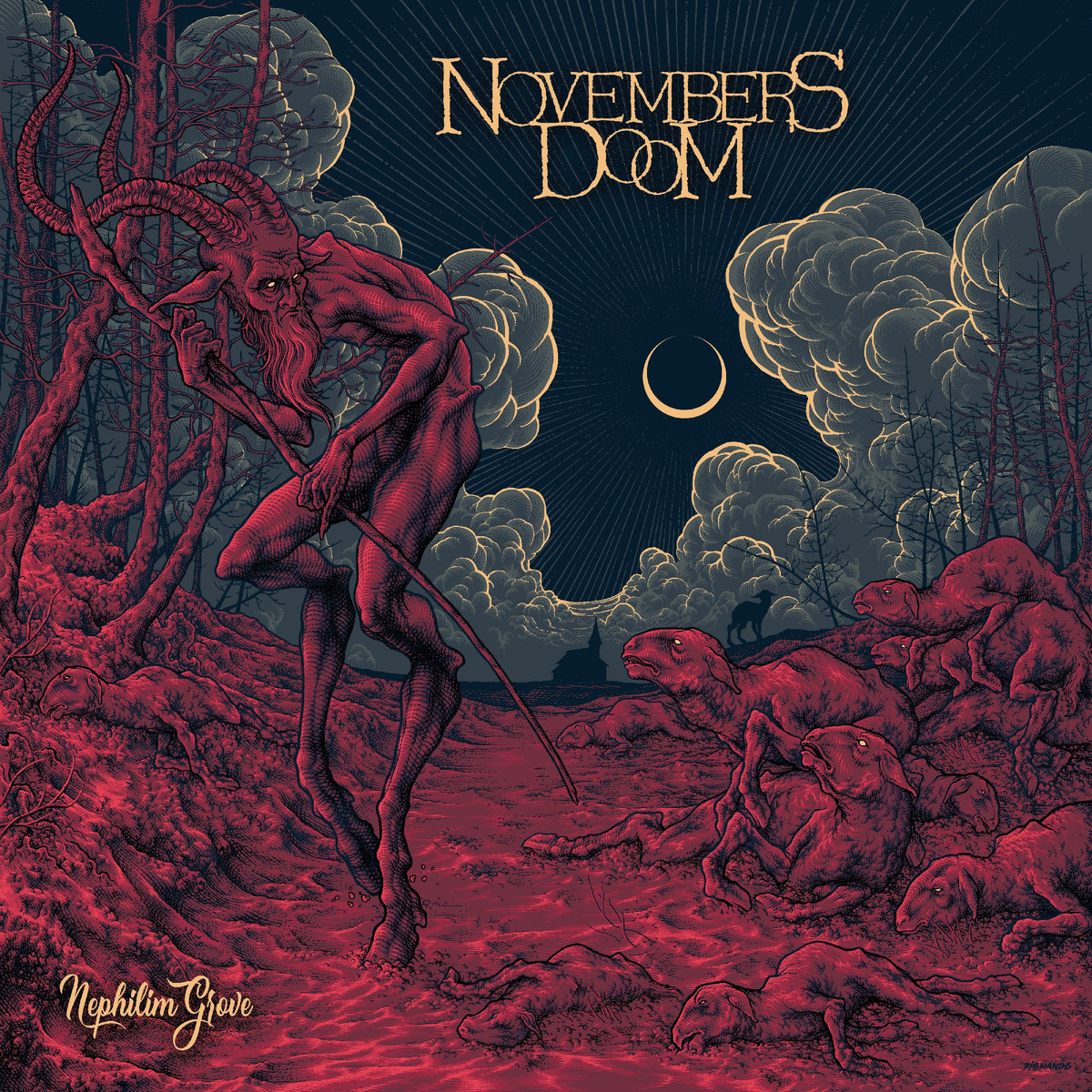 Never straying far from the bare essentials provided by the capabilities of five core musicians, hints of electronic backing tracks are the extent of additional depth to be discovered in the trenches of “Nephilim Grove.” The stylistic varieties found in gothic twilight of title track “Nephilim Grove” through the thrash-inspired “Black Light” are a result of intentional songwriting and a production that relies on instrumental pacing to set the desired mood. At no point does any musician in the band gain such an ego that other instruments are crowded out of the mix, and at no point is the overall direction of a track obscured by showboating. Novembers Doom is a well-oiled machine that has a foundational understanding of their own strengths and weaknesses, which they have proceeded to weaponize into a refined and unbreakable work of art.

For listeners seeking to hear a more explorative interpretation of “Nephilim Grove,” the bonus CD contains alternate editions of two album tracks. Titled as “matte variants,” both “What We Become” and “The Clearing Blind” are re-imagined on a backdrop of a delicate piano and mournful strings that resonate gently behind Paul Kuhr’s faint cries. From an album that leans so heavily on the relentless pursuit of two skilled guitarists, to hear the tracks deconstructed to their naked roots seems almost unnatural at first. However, it’s nearly impossible not to give oneself entirely into the enthralling renditions of what is otherwise unforgiving doom. If their originals were a hurricane of hurt, the matte variants are gentle summer showers filled with passion. While the variants and their models would never be mistaken for one another, it feels as though these few additional minutes of insight provides a valuable glimpse into the creative drive that brought the shade of “Nephilim Grove” to light.

Novembers Doom distills the intersection between beauty and pain, a place where agony and anger clash to create an unforgiving, wholly enveloping atmosphere. Invoking the darkness found in a world full of hurt, “Nephilim Grove” is an explorative expression of doom at its darkest, and death at its most dynamic