Shaking the very pillars of eternity.

The truism that times change and one would be wise to change with them is nothing to new to Nightmare, and specifically founding members and bassist Yves Campion, as his tenure in the French music scene goes back at least as far as 1979. Originally playing punk rock after the mode of the British scene that had taken the world by storm a couple years prior, he quickly found himself thrust into the maelstrom that was the European heavy metal scene, and with it came a new lineup and a more ambitious sound. As time marched onward and the band’s lineup continued to shift, a mid-80s career playing music comparable to the NWOBHM and early German heavy metal sound would give way to an 11 year period away from the spotlight before reforming and riding the millennial European power metal wave in the late 1990s. Not more than a few years later, a sound largely comparable to Stratovarius and Thunderstone would morph into something far heavier, eventually paving the way for a dark, forbidding and female-fronted incarnation of the band circa 2016 with Campion as the lone original member.

It is into this context that “Aeternam,” Nightmare’s 11th studio album and follow up to the viciously aggressive “Dead Sun,” finds itself. Having recently seen the departure of front woman and Belgian veteran vocalist Magali Luyten, along with drummer Oliver Casula, it seemed time for this outfit to recruit some younger talent. A beast of a percussionist was found in Niels Quiais to maintain the band’s colossal rhythm section laying waste to the ranks of Nevermore imitators milling about, but an even more interesting change was made in the case of alternative metal band Faith In Agony’s singer Marianne “Madie” Dien. Her voice can be best described as a grittier answer to the stereotypical power metal impresario, i.e. quite capable of sounding as pure as the wind-driven snow, yet often opting for a rawer, more forceful approach that fits the band’s groove/thrash demeanor while still maintaining the lofty melodic underpinnings of the Nightmare sound.

After the same spirit as the biting fury with a consonant, hook-drenched character of recent Tad Morose and Mystic Prophecy offerings, this album is an exercise in pummeling yet concise power metal that often crosses over into thrash territory due to the sheer level of heaviness on display. Much of what adorns this album could almost be considered epic in character, though it’s painted over with a cold, industrialized gloss that makes it more of a bleak excursion through a dystopian future world rather than a grandiose, sword and sorcery romp. Crushing anthems such as “Temple Of Archeron” and “The Passenger” reach a cathartic point when the chorus sections arrive, but the majority of the time is spent pummeling the airwaves with a low end, groovy stomp right out of the latter day Nevermore formula. The swifter paced punch of “Divine Nemesis” rocks a similarly infectious hook at the refrain point, but otherwise thrashes in a manner not all that far removed from something that might have been heard on the most recent Exodus or Testament album. 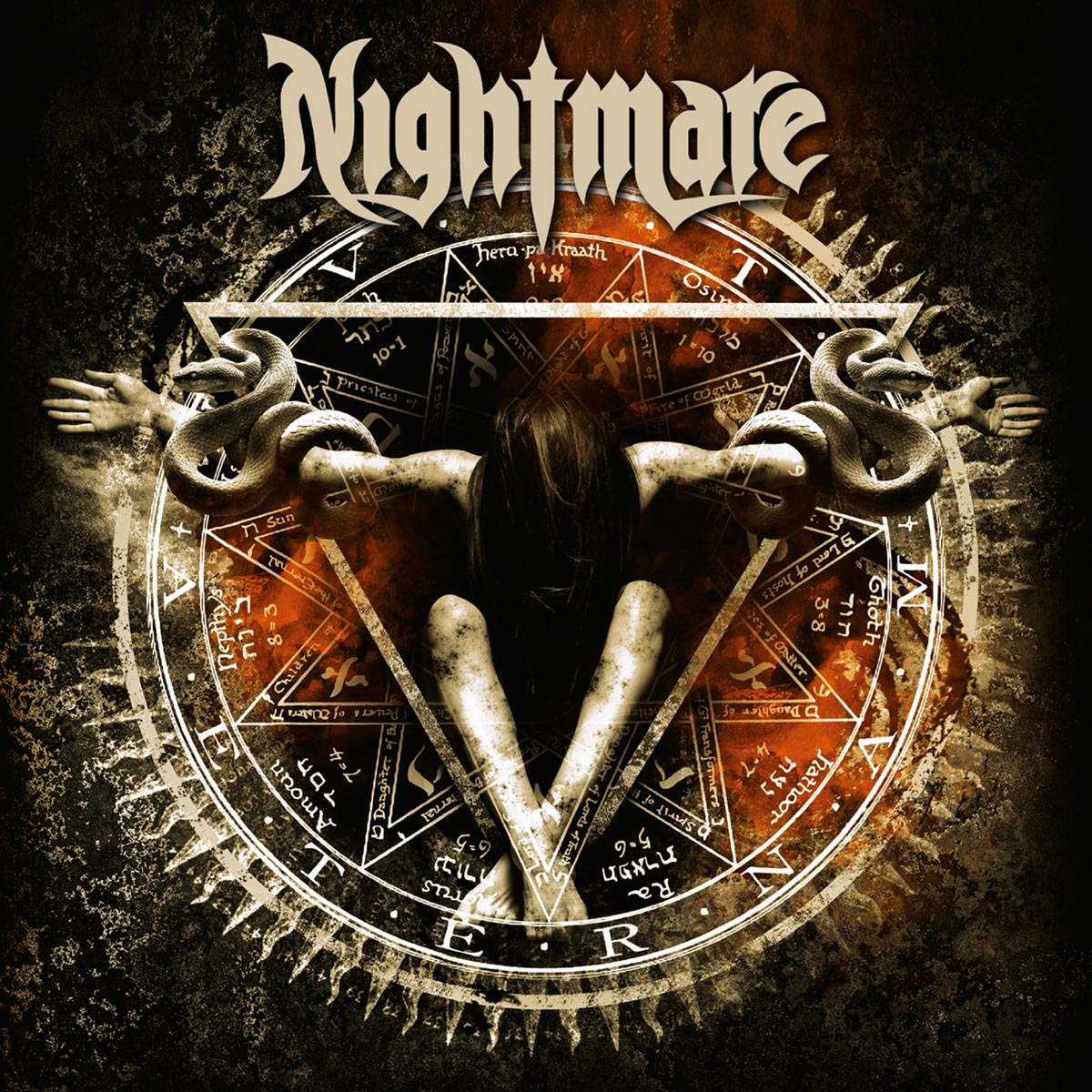 For the most part, this album follows a two-dimensional approach of either battering the opposition into submission, or outright pulverizing it into dust. The riff happy thrashing mayhem of title song “Aeternam” and the more rugged beauty matched with a demonic beast grooving, quasi-melodeath closer “Anneliese” stand as the more intense offerings of what is generally a straight shot of pure rage. However, the somewhat more tuneful and smooth fanfare of “Lights On” takes a catchier and less forbidding approach, sounding a bit closer to what this band was doing back in the early 2000s. Likewise, the creepy half-ballad and ode to Jason Vorhees dubbed “Crystal Lake” has more of a down-tempo, old school heavy metal anthem translated through a darkened, modern metallic lens. Even the heavy-ended quasi-thrasher “Downfall Of A Tyrant” seems more a danker reflection of the transitional power metal mystique of “The Dominion Gate,” having occasionally epic flourishes and dense keyboard overlays to accent the melodically consonant points on what is otherwise a fairly aggressive riff monster.

If nothing else, this album stands as an example of an old dog from the early days of the 80s metal era being more than able to learn new tricks, but that could basically describe everything that Nightmare has done since they reformed in the late 1990s. Though his bass work is more of a support beam that serves to buttress a cathedral of sound built out of all the other instruments and Madie’s soaring vocals, Yves Campion is an inspirational example of how the elder generation can stand toe to toe with the current crowd. In every respect, “Aeternam” stands firmly with one foot in the past and the other in the present, yet it ultimately comes off as something wholly new and fresh. It’s an exercise in pure metallic bluster; it stands almost entirely apart from just about every other female fronted metal act on the scene of late, and showcases a version of power metal that is similarly far removed from the gallant character that defined most of it 20 years ago, including this very same band at the time. Some choose to go forward by taking a stepping back, but this opts to take a quick glance back while continuing to step forward.

The godfathers of French power metal, or at least the remaining one alongside a fold of younger talent, offers up one of the heaviest versions of the sub-genre while still resting comfortably within its stylistic confines.