We all need context. It gives us a better perspective, a deeper understanding of a piece of art or performance.  It lets us know a bit more about the people who created the work.

The release of the “Cover to Cover Anthology” – which consists of a collection of cover songs available through the previously released “Cover To Cover” and “Cover 2 Cover” albums, plus a brand new volume to the series, appropriately called “Cov3r To Cov3r” – accomplish just that: it brings perspective into the musical foundations of three accomplished and talented musicians of our time: Neal Morse, Mike Portnoy, and Randy George.

The first two volume of the anthology are remastered and re-sequenced, so this is not just a recycling of past releases. The third effort gives an even deeper understanding of the musical seeds that allowed the abilities of these musicians to grow and expand. For the purpose of this review, we’ll focus on “Cov3r To Cov3r.”

The opening track is Yes’ “No Opportunity Necessary, No Experience Needed.” The organ and strings intro gives way to the lead vocals — and surprisingly it’s not Morse who sings. The mic duties are carried out by a special guest Jon Davison of Yes, so it’s no shock that he is his own element. Morse echoes the guitar of Peter Banks, while George and Portnoy add of layers to the original rhythm section of drummer Bill Bruford and bassist Chris Squire. Excellent opening salvo.

Up next is the rocking and catchy  Jethro Tull “Hymn 43,” another surprising choice giving its somewhat blasphemous lyrics. Morse does not try to emulate Ian Anderson’s approach, but instead displays a broader vocal range. The backbone section is on fire, with Mike‘s fills adding an adventurous feeling to the song. For David Bowie’s “Life on Mars,” the trio opts for a more contained version, but the execution is flawless and is well-suited to Neal’s voice. 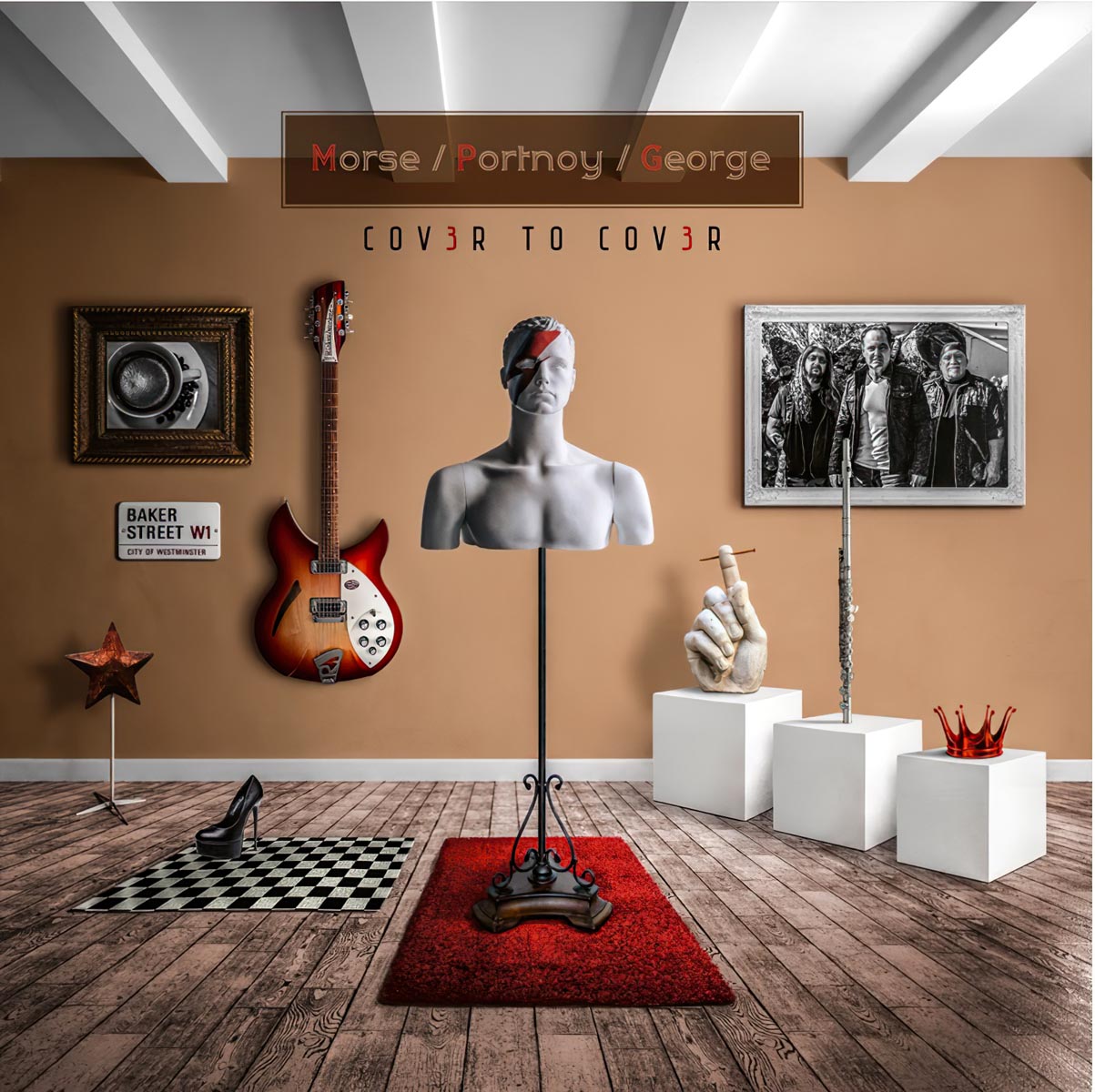 In an interesting choice MPG bring Gerry Rafferty’s “Baker Street.” next. In the original song, the famous saxophone riff is arguably the absolute highlight. However, in this version, the last two minutes completely steal the show as we are treated to a killer Morse guitar solo. George provides the cohesive element, and Mike knocks it out of the park with stellar drumming.

“It Don’t Come Easy” is probably the most significant song for Portnoy on this album. First of all, it covers a piece by one of his all-time drummer heroes, Ringo Starr. Also, he gets to sing it, as Ringo did, showcasing one of the talents that doesn’t get as much exposure with the Neal Morse Band.  And finally, he is accompanied by daughter Melody on vocals, and she provides some beautiful harmonies.

Next up is Badfinger’s “Baby Blue,” Portnoy and Morse then share vocal duties.  This could be another Portnoy choice since the drummer is a well-known film and series enthusiast, and this particular song gained new fame in the TV series Breaking Bad (that and Badfinger were very “Beatlesque” and recorded for that band’s Apple Records).

King Crimson’s “One More Red Nightmare”  is next in the track-list, marking second time they choose a KC song – and both have been from “Red” (1974). The  fiery, anxious, visceral and bold vibe of the original is written all over this magnificent rendition, with the trio delivering an energetic and deeply emotive performance of an already landmark tune. Portnoy is all over the place; and George grooves in a wonderous jazz/metal matrix, while the mysterious sax interlude adds a brooding atmosphere. And instead mimicking the original abrupt ending, their version gently fades out over a mysterious guitar and sax duel. Simply brilliant. 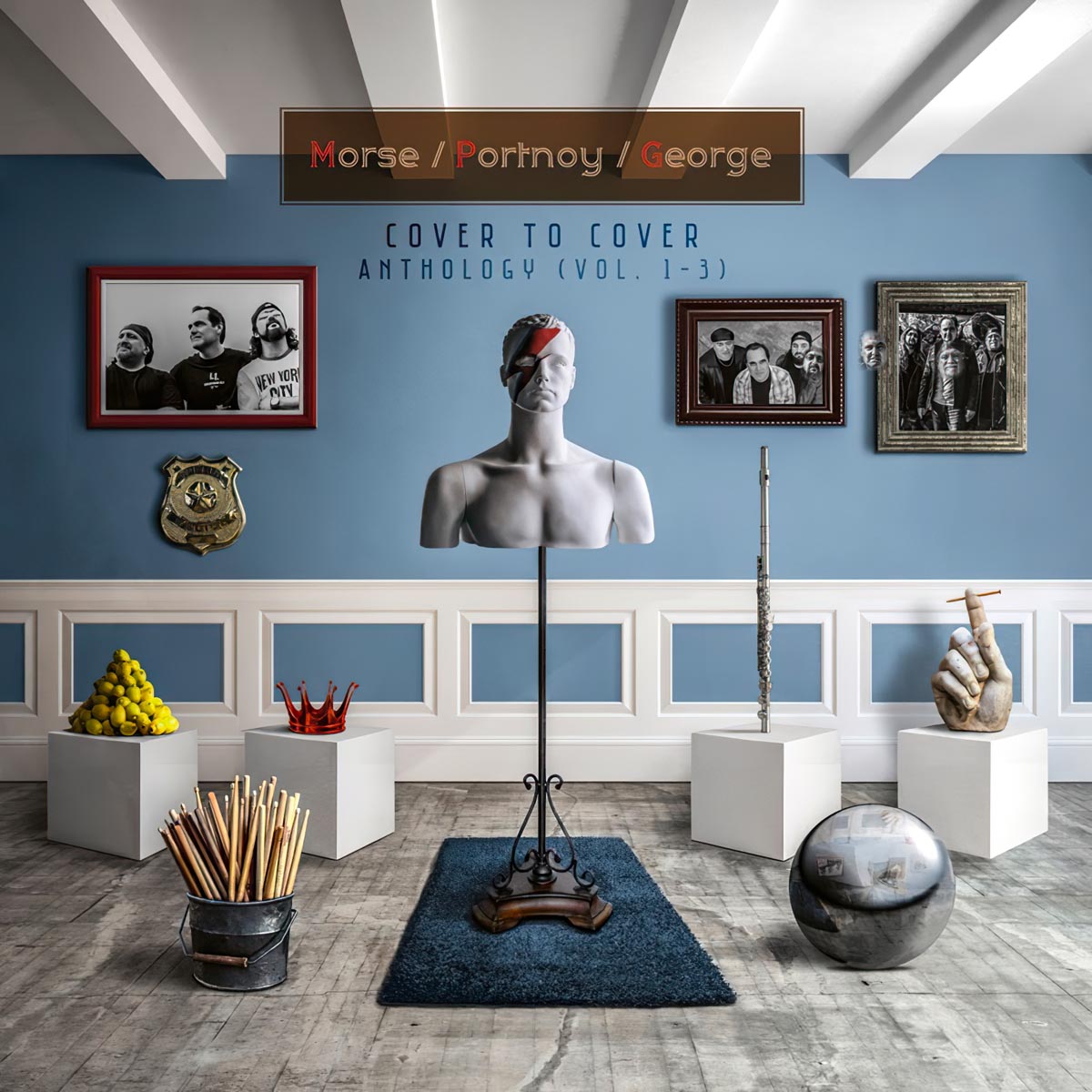 Next up is what feels like a Morse pick. If there is anything that he loves besides God, music and family, it is coffee.  So “Black Coffee In Bed” by Squeeze must resonate with him. The performance is well executed and faithful to the pop-rock spirit of it. But one “Squeeze” is not enough, apparently, since this band gets covered twice.  “Tempted” has that slinky sound of the original, reinforced by great vocal harmonies. And that is a constant throughout the MPG performances—strong vocals throughout, with catchy leads and luxurious harmonies.

Tom Petty’s “Running Down A Dream” interrupts the soft and melodic turn the album took. This one naturally has an urgency to it, a feel of chasing after one’s goals.  The last section is of pure musical bliss as Neal does a stellar job with the guitar solo, and George and Portnoy support it with a brilliant rhythm base.

The closing song is another surprise: “Let Love Rule” by Lenny Kravitz. The harmonies achieved by Morse and Portnoy are notable, a recurring technique they’ve mastered through many years of collaborations. It closes with a soul flourish, unique among the offerings “Cov3r To Cov3r” and providing a fitting finis.

The third installment of the “Cover to Cover” series only adds to the amazing catalog of these top-notch musicians. Once again, they show that they can master different styles and genres. The covers never feel as if they’re note-for-note imitations of the originals, and yet they don’t lose the elements that made those songs classics.

The anthology as a whole tells us much about Morse, Portnoy, and George.  What were their musical influences?  Who did they emulate at an early age?  What “oldies” still turn their heads and hearts?  And now that they’ve shared this with us, we have a better perspective on them as musicians and as people.  But beyond that, once again, they’ve created some exceptional music for our enjoyment.

The "Cover To Cover Anthology" is the perfect opportunity to dive into some of the influences that shaped Neal Morse, Mike Portnoy, and Randy George. The treatments are stellar, which is to be expected with these musicians. The joy they experienced while recording "Cov3r To Cov3r" is palpable and sweeps over whoever listens to their superb renditions of these already iconic songs.