Battle rages in the cosmic firmament.

One would be remiss to suggest that death metal is a one-dimensional expression at present, but even as far back as its initial upsurge in prominence during the early 1990s, the pioneering acts that had first conjured it from the extreme fringes of thrash metal were far from interchangeable. Even within the confines of the Florida scene, which is arguably where the style was originally distilled to its purest form, the similarities between conservative, Possessed and Slayer-inspired acts like Deicide and Death (prior to Human) were matched by a number of clear differences when considering the more doom-influenced sound of Obituary and Autopsy, let alone the grinding chaos of Morbid Angel. Even when getting into some of the slightly less prominent and more overtly thrash-leaning outfits such as Solstice and Malevolent Creation, even a novice ear would catch nuances in the degrees of sonic violence that made them quite distinctive.

This brief lesson in history naturally dovetails with the less prolific yet equally relevant Florida death metal machine that is Monstrosity, a band that is often labeled as a mere springboard for future Cannibal Corpse vocalist George “Corpsegrinder” Fisher that ceased being relevant after the close of the 90s. Though they’ve been quiet in the studio for the past decade following a respectable outing with a new line-up in 2007’s Spiritual Apocalypse, this year may well prove to be their loudest year since parting ways with their original vocalist, if not the biggest year that the entire Florida scene has enjoyed in quite some time. Reprising their respective roles with the newly acquired assistance of Alabama-based guitarist and death metal veteran Matt Barnes, the same incarnation of this band has found themselves lighting the sky ablaze yet again with just about every tool in their arsenal in the form of The Passage Of Existence, providing a fresh and highly technical twist on the old school approach.

Between the old school imagery of angels and demons locked in immortal combat in a shimmering sky vortex adorning the album cover and the highly metaphysical basis of the lyrical and sonic violence contained within, typical is probably the least appropriate description of this opus. Parallels can naturally be inferred between the nimble and progressive songwriting approach that dominated Chuck Schuldiner’s songwriting in the mid-1990s, as well as the technical edge of the likes of Sadus and Atheist, but overall this is its own expression in uniting old school brutality and modern technical fury. Praise is naturally due to the unfathomable barrage of speed and power put on display by lone original member and drummer Lee Harrison, the flashy virtuoso nod to DiGorgio on the bass provided by Michael Poggione and Mike Hrubovcak’s Corpsegrinder inspired grunts and barks, but guitar shredder Mark English steals the show with a masterful poise and virtuosity between his solos and riff work that actually outclasses his own concurrent contributions to Deicide’s latest offering. 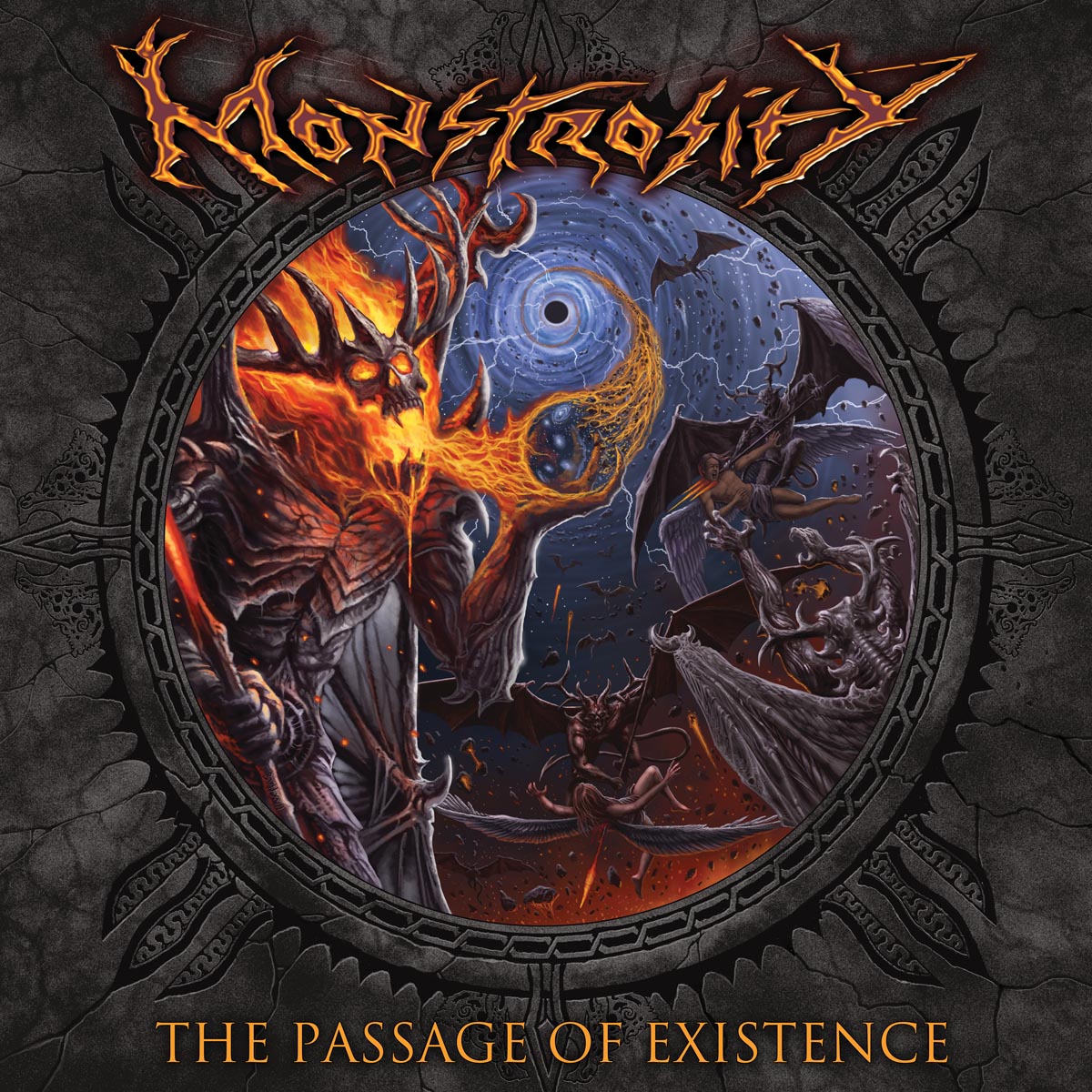 “The Passage Of Existence” Album Artwork

About the only thing separating this album from being a vintage classic circa 1995, capturing the essence of both Death’s Symbolic and the riff happy pummeling of Malevolent Creation’s Eternal is the colossal modern production job accomplished by Mark Lewish and Jason Suecof. Whether it be the potpourri of machine gun mayhem and prog-infused interlude sections that all but tell Revocation to “hold their beer” that is on display in “Kingdom Of Fire” and “Maelstrom”, or more concentrated and concise doses of blinding rage like “Solar Vacuum” and “Century”, it’s hard to find a solitary segment of this album that doesn’t rivet the sense with the fury of a thousand suns. As a whole, this album tends to start things off at a fever pitch and perpetually stay at it with few moments of respite, yet there is a sense of both climax and denouement to be found in the almost Nile-inspired, melodically nuanced closer “Slaves To The Evermore”, which somehow closes things off on an even higher note than all that preceded it.

If there is any criticism that could be thrown in this album’s direction, it is that it throws so much at its audience that it might not fully process in one hearing. It doesn’t necessarily function as a grower that takes time to appreciate, as it is definitely an all out, impact-based affair in the spirit of the classics of the Florida scene. However, the sheer impossibility of catching every single nook and cranny in the massive game of notes on display here is sure to inspire anticipation of a second passing before the last song has concluded, and it is definitely the sort of album that does not lend itself to skipping around. No self-respecting fan of death metal, regardless of any preference held towards the classics out of the New York and Swedish scenes over the Florida one should pass this up. Though the Corpsegrinder albums of their early years will probably prove to be more iconic, Monstrosity has death metal album of 2018 material on their plate here.

“The Passage of Existence” Track-Listing:

A scream of fury rages from the cosmic vortex, conjuring a fresh gloss upon a classic stalwart and reasserting the dominance of the three-decade institution that is the Florida death metal scene