Some would say that Southern rock is a dish best served live, even decades after the well-worn genre was at its peak. The first eras of rock were defined by the experiences that bands created on stage, a vibrant cast of personalities that lived to drink in the spotlight and masses of adoring fans. Others go so far as to say that a band cannot truly be experienced until their stage presence is consumed in real-time, where the strength of a band is judged by their ability to awe a crowd. Celebrating 40 years of such vibrant entertainment, veteran rockers Molly Hatchet come forward with their latest offering: a two-disc live album titled “Battleground.”

To truly appreciate the charismatic strength woven throughout “Battleground,” a quick history lesson on the weathered name Molly Hatchet is in order. While the original members of the band first formed and began playing in 1971, it wasn’t until 1978 that they released their self-titled debut “Molly Hatchet.” Though their beginnings were filled with lineup changes and unclear direction, in 1979 they released their platinum-earning magnum opus, “Flirtin’ with Disaster.” Now, forty years later, the band has undergone a complete lineup change from the album’s release, with a full cast of new faces carrying on the band’s spirit. In April 2019, longtime vocalist Phil McCormack passed away, shortly thereafter replaced with the band’s fourth and current vocalist, Jimmy Elkins. The longest persisting member of Molly Hatchet today is keyboard player John Galvin, having first become a member of the band in 1984.

Despite a full lineup change since their most popular work, Molly Hatchet has consistently put out new material driven by the style that garnered them time in the spotlight, including both full-length studio albums and a number of live albums. Their discography totals fourteen studio albums and, with the addition of “Battleground,” seven live albums. With half as many live albums as studio albums, it seems that Molly Hatchet knows that their rightful place is on stage, and want to impress on fans that their live spirit is just as important to understand as the clarity of their studio releases. For the Molly Hatchet live album experience to persist into the twenty-first century, the band sticks to a proven formula that captures the adoration of the crowd alongside the fire of their octane-driven southern bite. 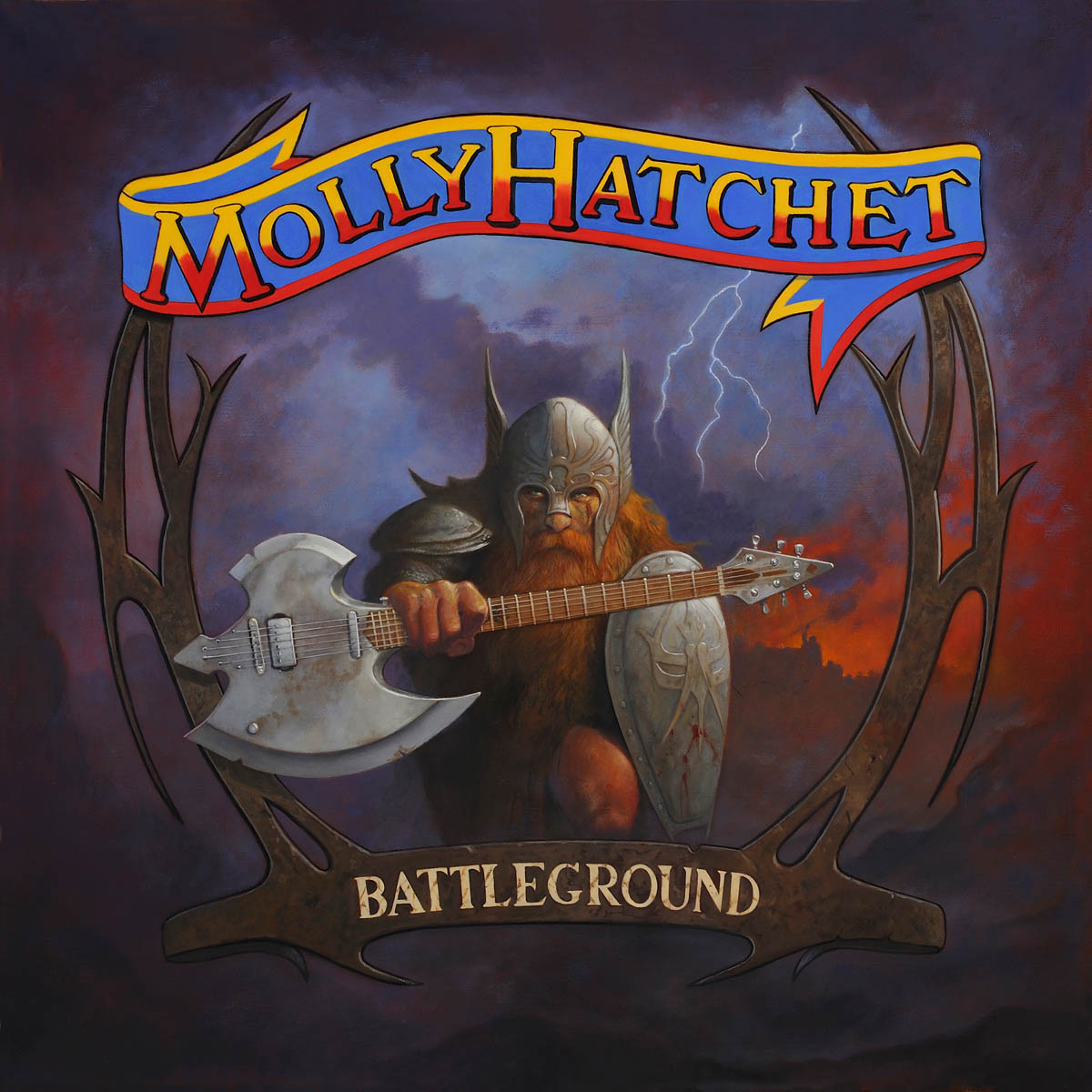 “Battleground” is a well-balanced and all-encompassing taste of the charm that Molly Hatchet has carried with them through the decades, balancing the flair of old-school rockstars with a tasteful twang in both voices and instrumentals. The two discs  were recorded in Switzerland, Germany, and the United States, comprised of a fan-driven track-list of both deep tracks and longtime favorites alike. Eager cheers open the album with first track “Bounty Hunter,” and the music continues to roll seamlessly between tracks, guitars never turning to silence. Banter is hasty and concise, never rambling for more than a few words before the song digs its heels in. Talking is reserved for the keyboard and guitar solos, which swell larger than life across hits including “Fall of the Peacemaker.”

Each band-member’s personality shines strongest in their performances, they sound to be entirely in their element when in front of a live audience, not limited just to Ingram’s incessant shredding or Galvin’s pure fire over the keys. Careful balance maintains audible fan reactions with the plethora of instrumental talent on stage, keeping roaring cheers slightly muted beneath Galvin’s furious pace on the keyboards. Though the din of a live audience had the potential to overwhelm Ingram’s steady hand on the guitar, the live recordings perfectly captured both his proficiency and comfort on stage without forcing it to sound as sterile as a studio album. The closing track and absolute fan-favorite, “Flirtin’ With Disaster” serves as a final cheer to celebrate forty years of artistry, no better way to remind fans of rock why Molly Hatchet has persisted. To put it in a concise way: “Battleground” is shock full of nothing but pure rock.

For a seventh live release, “Battleground” fares well against the test of time. Even though no current members were part of the band when its most acclaimed piece was released, their performances have a crisp, enthusiastic execution that is nearly identical to that of the band’s original lineup. Throughout “Battleground,” well-loved tracks are revealed to be slightly weary, including “Edge of Sundown,” which has been included in multiple other Molly Hatchet releases to date. Though it may not have been necessary to rehash this track once again, with much of the two-album release repetitive across other live offerings, it is refreshing to hear the high quality standards of modern recording. There is no doubt that this is a project spurred from passion and celebration, and that it is one that employs a deeply fan-oriented perspective. After nineteen tracks of aging rock-stars playing their hearts out, no matter how thrilled the crowd may seem, it still distills to a talented showcase of yearning for long-past glory days.

With a hearty helping of fan favorites, longtime rockers of Molly Hatchet celebrate the 40th anniversary of their most acclaimed album in unparalleled style. “Battleground” burns bright with the fire of enthusiasm that shines during live performances, all while delivering the classic Southern rock sound that drives to the heart of American rock nostalgia