The soul of a mighty playing machine.

The 80s could rightly be regarded as the decade of the guitar god, and amongst the many heroic six-string maestros to come out of said era, few could hope to match the sheer intricacy and speed of one Michael Angel Batio. Known for his elaborate live performances that features him fulfilling the role of two certified shredders via a multi-necked guitar and an ambidextrous skill set that would be the envy of many pianists, he brings a unique voice to the ranks of axe-wielding surgeons, one that is matched by a highly eclectic approach to composition that frequently sees him venturing outside of an exclusively metal-based format. Yet more so than anything else, he is a player that knows the value of a good melodic hook, and despite being occasionally being referred to as “the man who’s hands cast no shadow”, his latest studio LP “More Machine Than Man” is an exercise in matching blinding speed with an equally intriguing stylistic niche.

Though Batio will likely be best remembered as the amped up guitar solo and riff machine that accompanied glam-crazed heavy metal outfit Nitro during their latter day 80s excursion into excess, he has never been beyond taking part in the shifting trends that have graced the metal world in the years since then. There has always been a subtle progressive character to his songwriting, but this time around he takes things to their logical conclusion by offering up a set of mixed metered, elaborate, groove-infused thrashers that split the difference between what Jeff Loomis and post-2002 John Petrucci might have dreamed up. Naturally it’s not a full on emulation of said players as he retains the overt neoclassical tendency of his melodic approach and the largely programmed accompaniment sound that puts him fairly close to Joe Satriani territory, but this is definitely different territory for a guy who originally cut his teeth on the sound of the L.A. sunset strip.

There’s no beating around the bush to be found here, nor even a warm up prelude to set the mood, as this elite virtuoso goes right for the jugular at every opportune moment. Kicking things off with a power/progressive infused beast of an opener “Laser Guided”, Batio’s precision-based riff work is matched by a highly ambitious feat of drum program that would be quite well suited to Mike Portnoy were he involved in this project. Similarly geared cookers like “Beyond The Outer Limits” and “The Countdown Is On” also put on an impressive display of electronic arrangement amid a relatively tasteful display of guitar gymnastics on Batio’s part. Things take on a decidedly heavier note on the darker and groovier numbers of “The Two Sirens” and title song “More Machine Than Man”, owing to a truly sick guest drum slot by ex-Lamb Of God kit man Chris Adler, which matches Batio’s punishingly heavy yet nuanced riff work at just about every turn. 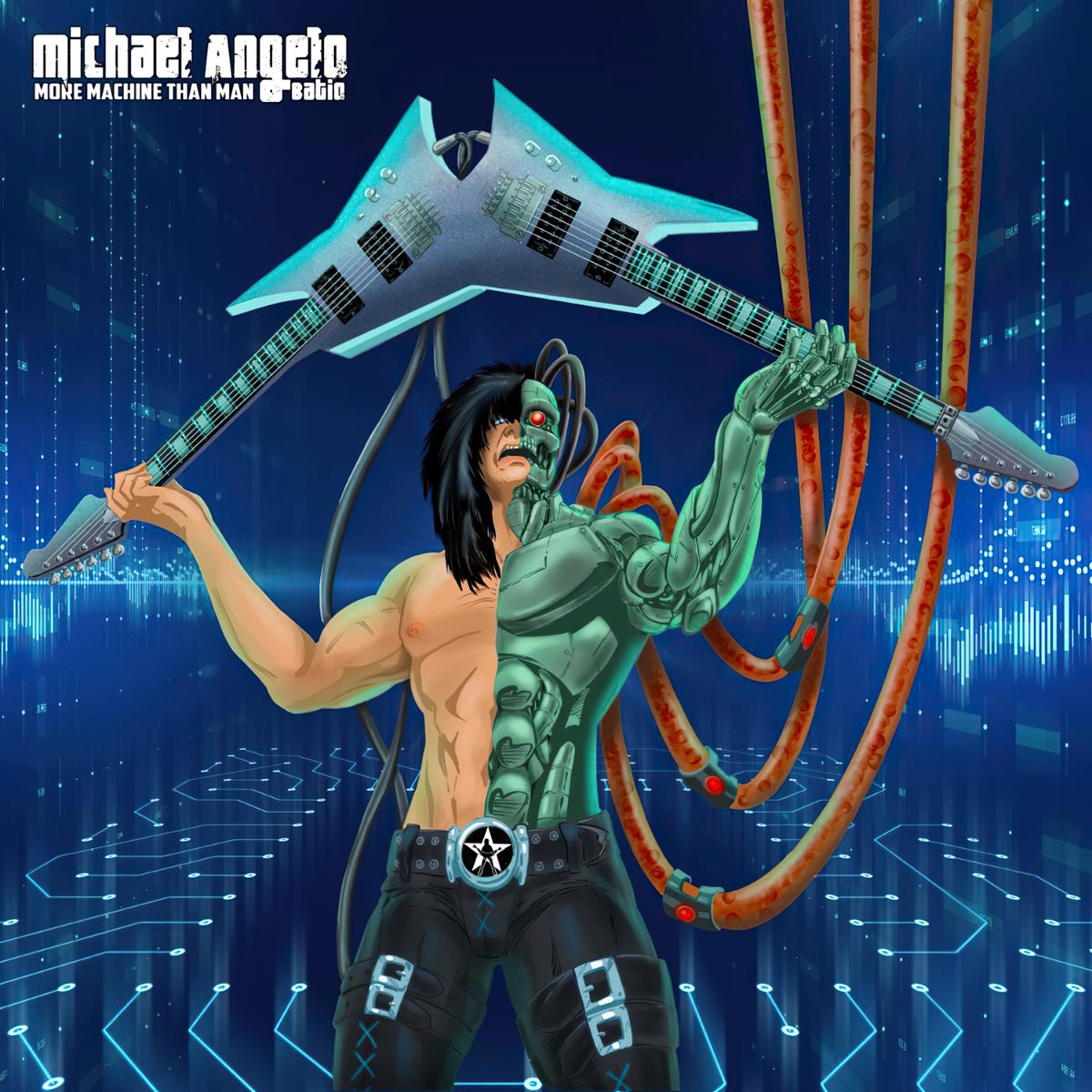 Naturally this album isn’t exclusively about smashing skulls with heavy rhythmic assaults and scrambling brains with gravity-defying lead guitar extravaganzas, as several occasions are afforded for a more nuanced take on things. The brief classical interlude “Dreamin’ Of 1986″ is a charming exercise in serene balladry, as is the somewhat folksy meets soulful “Rhythm Reprise (I Pray The Lord)”, offering up an atmospheric respite from the sonic slaughter. “Put All Fear Aside” takes a more frenetic approach and delves into more of an over power/speed metal feel, yet is notably lighter and more fun than it is dark and forbidding. But ultimately the greatest departure from the mechanistic grooves and dark progressive vibes that dominate this album is the smattering of what can be dubbed novelty cover songs that round out the bonus tracks on here, with “Charlie Went To Chicago” (a shred-happy reinterpretation of Charlie Daniels’ “The Devil Went Down To Georgia”) being the quickest to grab one’s attention.

This is one of those albums that, while clearly geared a bit more towards those who crave a more exaggerated answer to Satriani and Vai, does an apt job at straddling the fence between said icons and the more modernized approach to instrumental shred taken by Jeff Loomis on past solo outings. It’s still well within the expected sonic paradigm of anyone who has been following Batio’s output at least since the mid-2000s era that gave everyone “Hands Without Shadows”, but it comes with a few noteworthy surprises for anyone of said disposition. It’s not quite as consistent in delivering memorable anthems relative to said album, but it’s no slouch in that department, and showcases a more inventive side to a player who has been honing his craft for the better part of 40 years. It cuts a bit against the Malmsteen rule of more being more, but there is no shortage of superhuman chops on display here for those who crave them

Shred is more than a matter of velocity, it is an art form unto itself that can manifest in many ways, and arguably the man with the fastest hands and the most expressive style runs the gamut of its possibilities with machine-like precision