One of the most engaging, nay enthralling aspects of the European power metal scene is the conceptual storytelling that often comes along with the infectious hooks, high octane riff work and virtuosic musicianship. However, even among such dynamic players in an ever-evolving scene, Denmark’s Manticora has stood apart from the pack. Born out of the ashes of a thrash metal project in the mid-90s called Fear Itself, guitarist Kristian Larsen and vocalist Lars Larson became captivated with the vibrant energy displayed by the likes of Blind Guardian, Helloween and Gamma Ray, and would stake out a more speed metal-infused approach on their 1999 debut “Roots Of Eternity,” essentially falling into a similar niche to their Swedish contemporaries Persuader about a year before their debut LP was released. But with the passage of time this outfit would grow into something a bit less conventional when compared to the aforementioned bands, eventually culminating in a sound that today strikes a bit closer to the ones associated with dark progressive outfits like Communic and Symphony X.

Following 2010’s “Safe” and an 8 year studio hiatus, this wildcard of the European power metal deck opted to break the mold completely with a highly ambitious, horror-based concept album in 2018 dubbed “To Kill To Live To Kill.” Further expanding upon their stylistic template, a strong helping of melodic death metal and the older thrash metal sound of the Fear Itself days, this album came dangerously close to completely redefining the sub-genre, to speak nothing for the fact that the story itself sums up the plotline of a 334 page novel composed by Lars Larson himself. Nipping on the heels of this massive undertaking is the second part of the story in 2020’s “To Live To Kill To Live,” which matches its predecessor in every respect and further pushes the envelope towards a more extreme fringe within the power metal paradigm. Even for one who has not acquired the accompanying book, it becomes immediately clear based on the highly innovative mixture of aggression and technical intrigue that the tales being depicted run somewhere along the line of the first Creepshow film meets Cloud Atlas.

In a clear act of throwing caution to the wind, this album starts off with a gargantuan, 14 minute plus epic crusher in “Katana – The Moths And The Dragonflies/Katana – Mud”, essentially frontloading this album’s magnum opus at the very beginning of things yet somehow having it work in the album’s favor rather than having it rob the rest of the songs of their prominence. The song vacillates between a mad, speed-infused extravaganza that frequently crosses the borders between where power metal ends and death/thrash begins, often featuring brilliant melodic guitar flourishes and dense vocal arrangements indicative of a strong Hansi Kursch influence, and occasionally some subtle Japanese vernacular musical elements. By itself, this song puts this album in the midst of greatness, but its various twists and turns find worthy echoes in the other installments of the “Katana” subplot of the storyline, with both “Death Of The Meaning Of Life” and mini-epic closer “Beheaded” hitting the same speed thrashing fever pitch mixed with pristine melodic guitar brilliance and triumphant choral splendor. 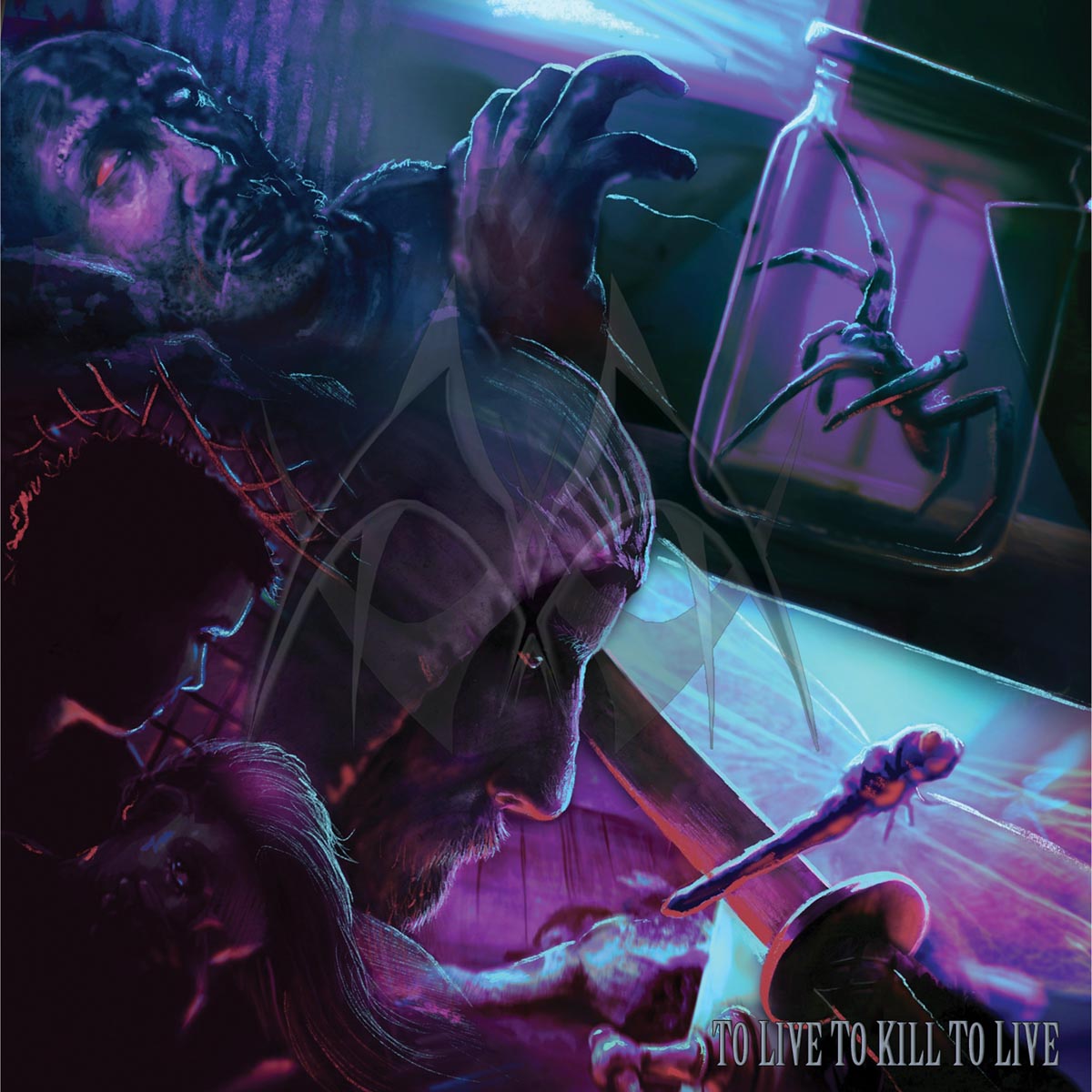 “To Live To Kill To Live” Album Artwork

While the samurai-themed trilogy culminates in the zenith point of this album, it is accompanied by a near equally formidable collection of offerings that round out the other two respective tales within the album’s narrative. Things take on a bit more of a horrific turn in the twisted lyrical excursion “The Farmer’s Tale, Pt. 3 – Eaten By The Beasts”, which adapts the band’s thrashing power metal sound into a bit more of a quasi-death metal context, loaded with dissonant elements and jarring shifts in feel to further accent the story’s gruesome imagery. Other moderately long songs like “Slaughter In The Desert Room” and “Tasered/Ice Cage” lean a bit further into progressive territory and balance out the speed and bluster with a somewhat more mystically-tinged texture, all the while still hitting a brilliant cathartic point when the chorus hook emerges. Even when things take on more of a slow-trudging, almost doom-like character as on “Through The Eyes Of The Killer – Filing Teeth”, this album’s neurotic lyrical content is well matched by a dense and elaborate set of sonic expressions.

Ordinarily a band that has taken time off from the studio for the better part of a decade will find themselves a tad off their game, but in Manticora’s peculiar case, the extended hiatus that occurred prior to this album’s predecessor was likely time spent conceptualizing the extremely vivid concept that eventually birthed this exercise in unfettered rage and majesty. There is scarcely a dull moment to be found anywhere on this album’s 63 minute duration, as even fleeting interludes such as the homage to Japanese folk music “To Nanjing” and the twisted lullaby “Stalin Strikes” have a charm and utility that serves to help expedite the album’s flow rather than fight against it. Ever since the twilight of the 1990s, at the apex of the original power metal explosion in Europe, yours truly often wondered if a band would create something compelling enough to rival Blind Guardian’s “Nightfall On Middle Earth.” The culmination of “To Live To Kill To Live” and its predecessor may well be that long awaited contender to the throne.

“To Live To Kill To Live ” Track-listing:

One of the millennial power metal revival’s wildcards and Danish thrashers turned progressive enthusiasts Manticora return with the second part of one of the darkest, most elaborate and aggressive conceptual endeavors ever to be associated with the sub-genre.