If it ain’t broke, don’t fix it. Once early heavy metal and hard rock hit their stride, those early sounds were forever immortalized in musical history, and would be forever held as paragon of brilliance. Even today, each new metal or rock endeavor is judged against a picture painted decades ago, complete with the first clutches of darkness wrapping their fists around electric guitars. While metal has seen its fair share of innovation over the last two decades, the ravenous hunger for this spiritual home has persisted, now belonging to a style that has the privilege of being known as ‘old-school.’ Carrying on in this vein, multinational hard rock and heavy metal band Lucifer know just how to tap that nostalgia with fierce precision, bringing modern production to all things heavy without frills or fanfare.

Since forming in 2014, the band’s only stable member has been founder and front-woman Johanna Sadonis, also known for her time in The Oath. Complemented by a rotating cast of guitarists and drummers as she moved across Europe, Lucifer’s third album “Lucifer III” is a strong, confident step forward that allows the band to maintain its distinct style without compromise. With a penchant for guitars that strike to the soul, Lucifer’s latest opus is burgeoning with a sometimes gothic darkness. Including a number of titles that call on coffins, demons, and snakes, Lucifer is unafraid to pull liberally from horror favorites and hard rock pastimes. Broody progressions and melancholic keening allow “Lucifer III” to pull the best from hard rock’s highs and metal’s aggression as the album works its way into the listener’s blood.

Sadonis’ vocal range is just one component of Lucifer’s well-oiled mechanics, but it is the band’s most undeniable strength. The range and passion that Sadonis crosses from track to track is magnetic, with an inflection that makes it impossible not to picture leather pants and hair that grows larger-than-life. There are few songs where such an image is clearer than the high-octane thrills of “Flanked by Snakes.” Tearing open with an electric hook, the easy rolling tempo of the track swings from vibrant solos through verses that hit with unwavering self-assurance. The perfect song to accompany a long car ride at early dawn, Sadonis sinks her claws into the song’s fire and ice and refuses to let go. Her smirk is entirely audible, radiant confidence similar to that of single track “Leather Demon.” 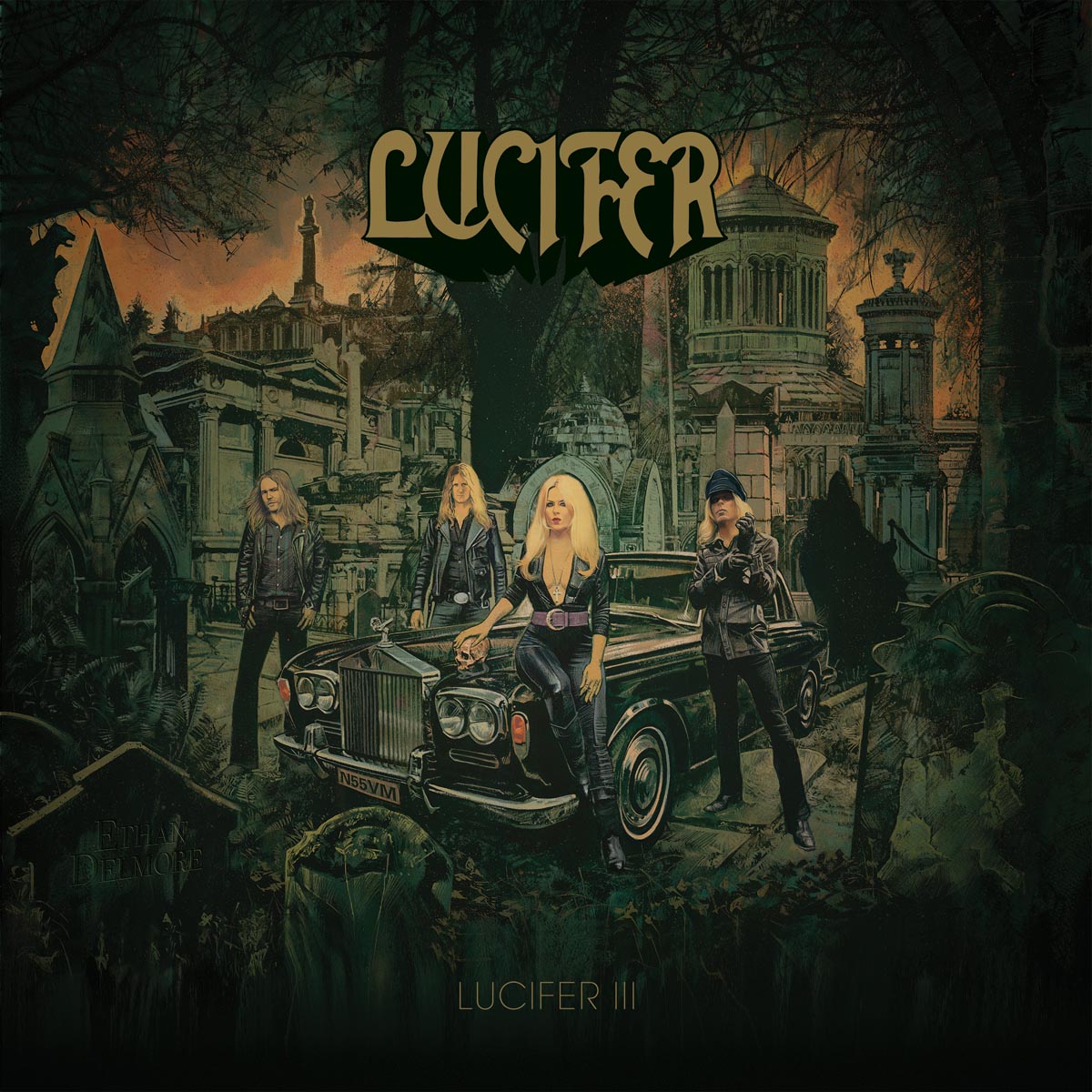 A somewhat provocative image is made complete with the gritty depths of “Lucifer,” a track that bears the band’s name in a beautiful stylistic fit. From the seductive chorus to the energizing spark of guitars, not a moment of this song goes to waste. Building an atmosphere that feeds on the listener’s mounting excitement, Harald Gothblad’s smooth hands on the bass could coax the hunger for a thrill out of even the most placid audience. Complete with the braying of a goat to set the scene, “Lucifer” grows on the angsty tension of the earliest invocations of the devil in music. Similar in angst and woven with even more smoky scents of the gothic is sixth track “Coffin Fever.” Leaning into the more aggressive static found in early metal, “Coffin Fever” offers some of the most intimate perspectives on the album, bringing Sadonis to the center stage with a stronger vocal mix than a number of the album’s other songs.

There is no need for Lucifer to break new ground stylistically, for the pure passion fueling their craft creates a distinct sound that wraps around listeners in a comforting shroud of nostalgia. Straightforward and driven, Sadonis pilots her ship with clarity and certainty, a vision which retains its integrity through each of the nine tracks. Her voice is one that seems to have been made for the sole purpose of imbuing pure heart into the comforting textures of old-school rock melodies. Accompanied by riffs that keep a sharp modern edge while retaining a clear reference to the guitar-wielding stars of the 70s, Lucifer’s style is one that serves as a perfect match for its artists. Sadonis has surrounded herself by musicians whose capabilities are the natural compliment to her confidence, laying the groundwork for vocal magic. Though these instrumentalists often seem comparatively muted on an album that is strongly vocal led, there’s no question that “Lucifer III” delivers an uncompromising vision of old-school sound tinged with doom for the twenty-first century.

Old-school for the modern era, “Lucifer III” drives straight to the heart of nostalgia with an album that captures the best of hard rock and heavy metal. Dark without losing a taste for excitement, Lucifer’s latest opus is a treat for anyone that craves a taste of creation without compromise.