Hell is live on rock radio.

Though they are often compared to the original American prognosticators of all things theatrical and over-the-top Gwar, Finland’s costumed metallic export Lordi has done much to distinguish itself since it first came raging out of Tornio in 1992. In contrast to their visually similar forerunners, the format employed by this nightmare out of an olden horror flick and his quartet of collaborators is of a more old school rocking demeanor, drawing heavily upon the heyday of 70s rock as embodied in the seminal offerings of Alice Cooper and Kiss, and dressing up in a gloss of heavy-hitting grooves and 80s post-disco catchiness that might lead one to accuse this outfit of copying the likes of Battle Beast were they not already doing it almost a decade earlier. All of these varied sources of inspiration are translated into a largely horror movie inspired medium that occasionally reaches back to the glory days of 80s slasher flicks, and sometimes even the classic monster movies of a more bygone era of cinema, resulting in something that is highly theatrical and conceptual in character.

While generally sticking to a fairly basic, radio-friendly structure of songwriting that is heavily rooted in hard rock and heavy metal traditionalism, Lordi is nothing else if not creative in how these otherwise predictable chapters are bound into a singular audio novella. In the 10th installment of what can best be described as an ongoing series of similarly solid offerings, this monstrous fold offers up a fictional compilation scenario of sorts in “Killection”, presented as a block of radio hits with a deranged disc jockey occasionally chiming in who sounds eerily similar to Eddie Trunk. Despite the somewhat more comical take on the subject of evil presented in the various SCG segments (short breaks in the music known as “Scarctic Circle Gatherings”), the musical offerings that result from this novel approach of presenting original material as a sort of greatest hits radio countdown shtick are quit apt, displaying a wide range of stylistic shifts that could almost qualify Lordi as the Weird Al Yankovic of heavy metal, though minus the obligatory accordion and a much deeper and more gravely singing voice.

Not one to skip up on the creepiness factor when telling his humorous tales of monsters running amok and psychos stalking their unsuspecting prey, atmosphere plays as much of a factor in shaping these songs as the tuneful melodic hooks and crunchy grooves that define this metallic brand. A precedent is set even before the first song chimes in, as the introductory SCG offers up snippets of various fictitious songs that reminisce upon the works of AC/DC, Judas Priest, King Diamond and Ozzy Osbourne. The looming keyboard intros that kick off opening rocker “Horror For Hire” and the twisted romantic stomp “I Dug A Hole In The Yard For You” set a mood of dread that manages to linger throughout each song’s 3-4 minute duration as Lordi’s occasionally shrieking recount of Accept and otherwise grunting hybrid of Sabaton and Pantera paints the picture of a demented show host recounting how the killer snuffed out everyone except for the token virgin survivor. Things take on a more extreme tone with the slightly Slayer-inspired dissonant crusher and occasional thrasher “Evil”, arguably the most intense offering heard out of this outfit yet. 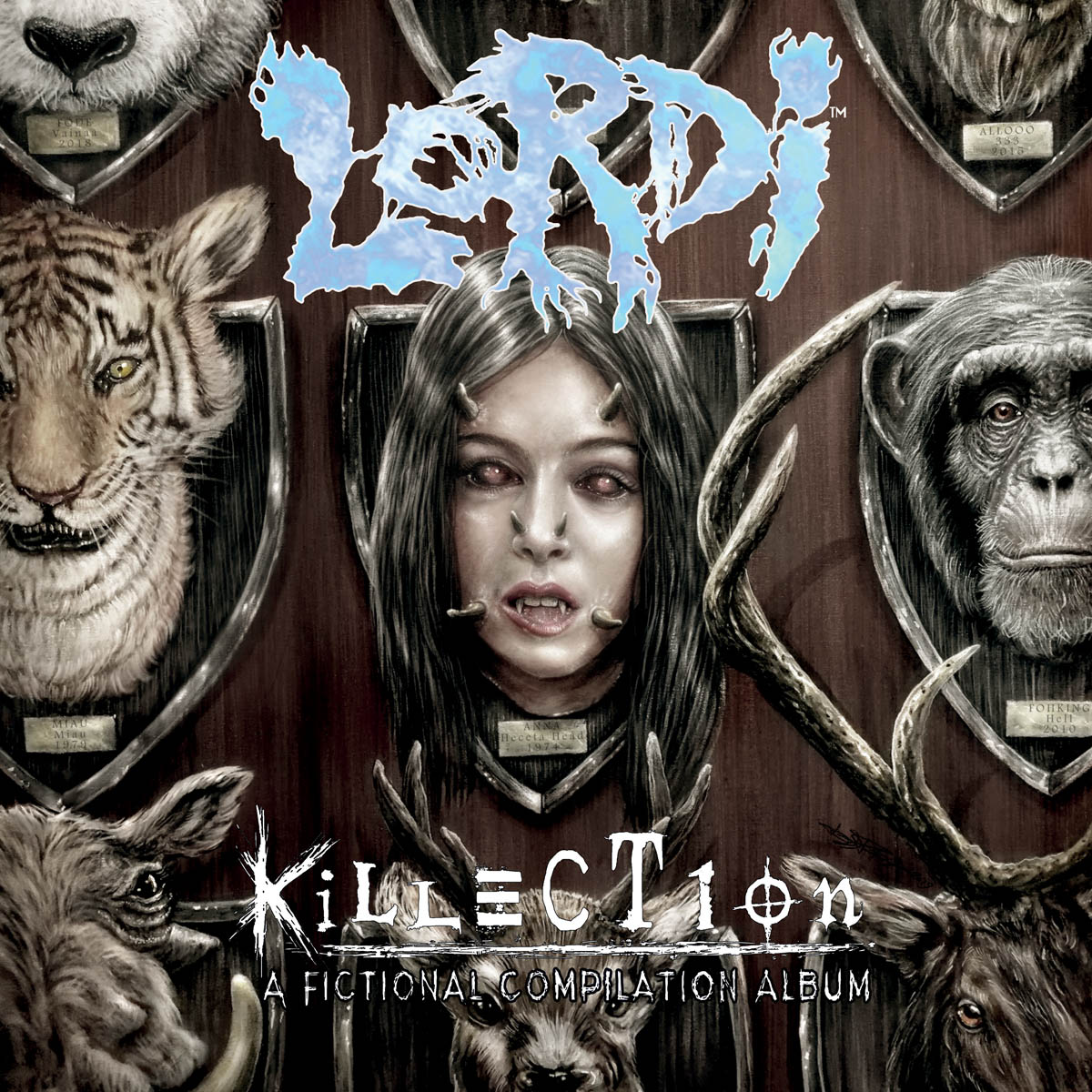 Although heavily steeped in metallic fury, this album showcases a degree of stylistic eclecticism that is not often encountered in metal circles. Among the less jarring shifts in direction is the retro-80s ballad “Like A Bee To The Honey”, which sounds like it could be duet material with Lita Ford filling the second vocal slot. A rather auspicious left-turn into early 70s hard rock with a slight psychedelic edge emerges in the Zeppelin meets Sabbath-inspired “Blow My Fuse”, while the comically groovy “Zombimbo” goes into full on disco mode like Lordi is taking a break from the slashes and splatters to allow one of the colder zombie chicks to bare it all on the stripper’s pole. Even the somewhat heavier, riff-happy anthem “Up To No Good” forsakes the heavier tendencies of Lordi’s usual offerings for something closer to glam rock. There is even a foray into full on ballad territory with a piano blazing after the mold of Survivor and Journey’s radio fodder circa 1983 to be heard in “Apollyon” .

One doesn’t really listen to a Lordi album so much as one enters the car after getting his wristband scanned, and proceeds to hold on for dear life as the rollercoaster runs its course. In comparison to the longer running yet more stylistically uniform predecessors in “Sexorcism” and “Monstereophonic”, this latest ride has a lot more neck-wrenching jerks and loops to challenge the rider’s ability to keep his lunch, but there is definitely a logic to how this train repeatedly goes off the tracks that makes it fun and engaging from start to finish. It’s a bit more of a grower when compared to the last couple of albums, and it’s a tad slower and less impactful than the amazing feat of rocking metal that was “Monstereophonic”, but Lordi isn’t the type of half demon, half goblin overlord to disappoint his minions. Some of the more outlandish parts of this offering may prove a challenge to fully process, but at the end of the road is another fine slab of catchy goodness from one of the baddest characters in the business.

Finland’s famed amalgam of Alice Cooper, Gene Simmons, Udo Dirkschneider and Oderus Urungus lays out another solid slab of shock rocking heavy metal that bridges the glory days of the 80s with the current retro-metal craze