To run a losing race with destiny.

Death is, by nature, a depressing concept that lends itself well to the slow, sludgy world where the gravely pace of doom metal and the dissonant tonality of the style that bears the subject’s name. Ironically enough, the roots of death metal itself are tied in more directly with the frenetic, agitated character of thrash metal, and most of the sub-genre’s early progenitors were more closely associated with said scene than not. However, even before the close of the 1980s there were indications that certain affiliates of the Florida scene were hinting at something that lived less on impact and more so on atmosphere, with both Obituary and Autopsy spearheading a forerunner niche to what would become death/doom. However, it would be a couple of noteworthy outfits from the smaller and less prominent British death scene that would carve out a stylistically nuanced crossroads where death metal’s thrash and doom proclivities could exist in a sense of twisted harmony.

Following in the aforementioned tradition that was explored by the likes of Benediction and Bolt Thrower in the early 1990s, Newcastle natives Live Burial have crafted a formidable offering in sophomore LP and death thrashing monstrosity “Unending Futility”. Moving away from the more prominent death/doom of Asphyx that painted much of their earliest material and their 2016 debut “Forced Back To Life“, it is an album that turns back the clock a few years toward something a bit more traditional and technically involved, though still possessed of that agonized sense of hopelessness that comes with even a subtle doom influence. The dimensions carved out by a low-fi and fuzz-drenched production gives these songs a sound heavily rooted in the dreariness of “The IVth Crusade”, and also occasionally the more brutal and morose character of Immolation’s “Dawn Of Possession” when the tempo is kicked up to a more blasting roar.

In contrast to what has been a trend towards a humbler and more rustic approach to musicality that puts an emphasis on droning riffs and hypnotic yet fragmented dissonant melodic passages in doom-leaning death metal of late, this is an album that isn’t afraid to turn on the intricacy factor maximum impact. Among the more blatant examples of this is the generally conventional mixture of fits and starts with the looming threat of execution via the passage of time “Swing Of The Pendulum”, which features some fairly shred-happy guitar solo work reminiscent of Chris Murphy in his youthful prime and occasional animated bass hooks channeling Geezer Butler. Another curious interlude into divergent territory is the haunting ballad/instrumental interlude “Winds Of Solace”, which also features some interesting bass work amid what can be best described as a dreary part classical, part jazzy acoustic ditty that sounds more appropriate as the intro to a King Diamond song rather than something on a death metal LP. 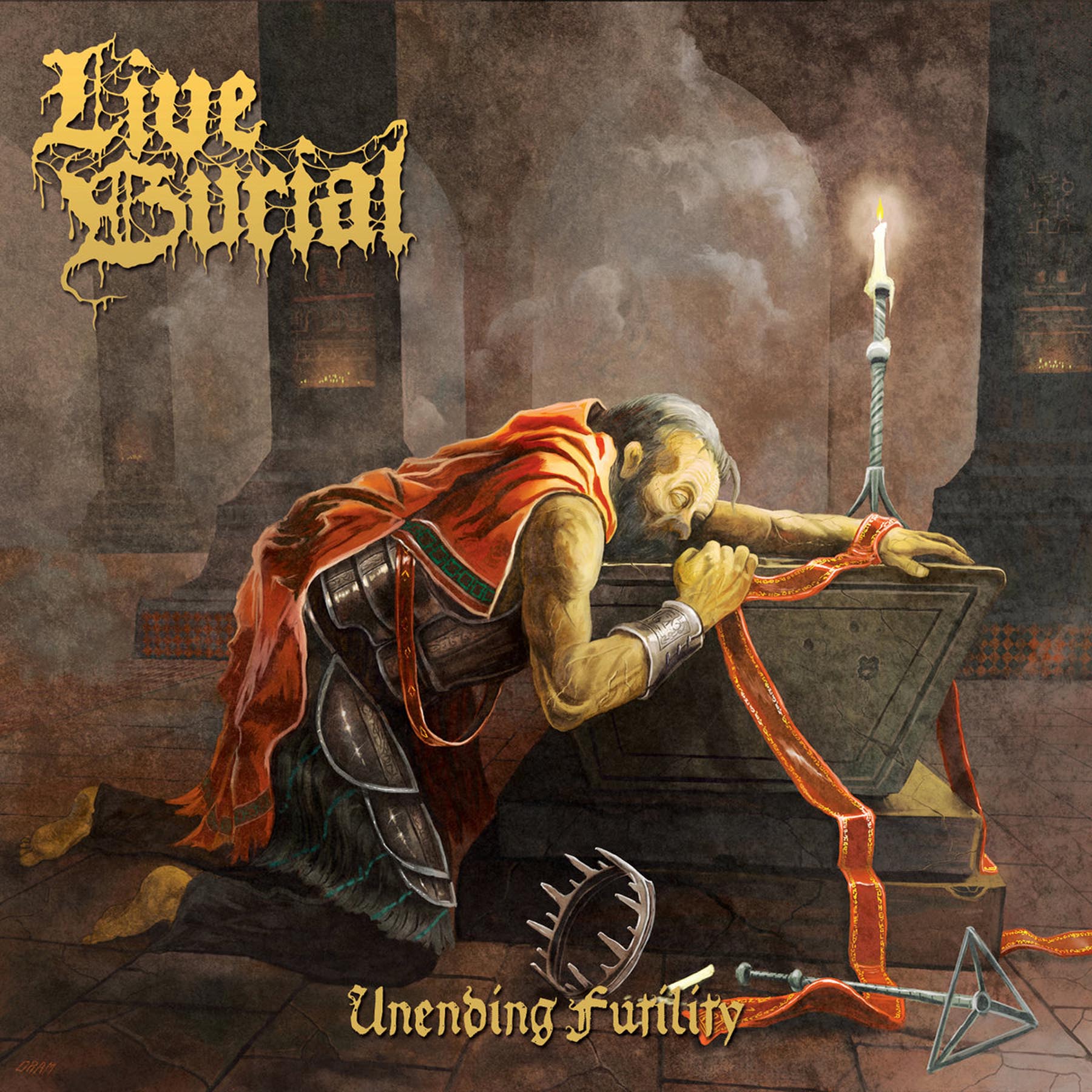 Although this album doesn’t really meet the threshold of droning slowness worthy of having the doom moniker stamped on its resume, it has the uncanny disposition of featuring its strongest moments on the slower and longer offerings. The disquiet and discord sewn on “Rotting On The Rope” is disturbing enough to chill the bones of any old school death trustee with a taste for early Obituary with a dash of that muddier and lower-fidelity New York sound. But the best is saved for last when “Cemetery Fog” makes its way into the equation, featuring some of the busiest riff work heard in the older style and some truly jarring shifts in feel. Even the generally conventional mid-ranged roar of Jamie Brown takes on a particularly agonized tone, accompanied by a sizable collection of technical feats among the various instrumentalists, including a truly riveting guitar solo at around the 5:30 minute mark, all but perfectly revisiting the agitated soloing style the Hoffmann brothers took to Deicide’s seminal offerings.

While the trend of revisiting older death metal sounds has been a fairly popular one over the past decade, Live Burial is onto something a bit less heavily explored of late, and makes themselves distinct from a growing number of bands seeking to channel the classic “Leprosy” style by exploring murkier territory. It may not be wholly original territory, but the sort of early 90s transitional sound of Bolt Thrower and mid-90s thrashing yet measured Benediction niche hybrid on display here is definitely less common. The more drawn out song structure approach is tempered with a tendency towards frequent and usually jarring transitions between extremes, all the while eschewing the moderated death ‘n’ roll sound, resulting in something far more enthralling and climactic. It’s perhaps a bit more of a grower than it is a shower, but it’ll definitely grow on you quickly, not unlike the agents of decay that the lyrics dwell upon with a poetic fervor.

1. Seeping into the Earth
2. Condemned to the Boats
3. Swing of the Pendulum
4. The Crypt of Slumbering Madness
5. Rotting on the Rope
6. Winds of Solace
7. Cemetery Fog

The depressing subject of fatalism is prime territory for an aspiring death/doom act, but a younger British act has seen fit to go back in time to before said hybrid style came into being to tap into the forerunners thereof for something a bit more nuanced