LIONE/CONTI is a collaborative vocal driven power-metal album born under the auspicious of Frontiers Music, one that needs a bit of family tree untangling due to the singers previous involvements. Alessandro Conti is the singer of the Italian power metal band TRICK OR TREAT and was also tapped to be the lead singer in LUCA TURILLI’S RHAPSODY when the two founding members of RHAPSODY, Luca Turilli and Alex Staropoli decided to part ways and create their own versions of said band. Fabio Lione is the original and defining voice of RHAPSODY, fronting the band from 1995 until his departure in 2016, having voiced all the band’s albums to date, including the classics “Legendary Tales”, “Symphony Of Enchanted Lands” and “Dawn Of Victory”. Lione is currently reunited with RHAPSODY members Luca Turilli, Patrice Guers and Alex Holzwarth on the RHAPSODY reunion tour. Fabio is also known for his work with ANGRA, KAMELOT and ETERNAL IDOL.

Now, for the first time the two voices of the RHAPSODY universe, and longtime friends, have joined together for the new project LIONE/CONTI, continuing the show the same power metal passion that has defined each vocalist’s career and teaming up with DGM guitarist/composer and producer Simone Mularoni, who composed and produced the album. 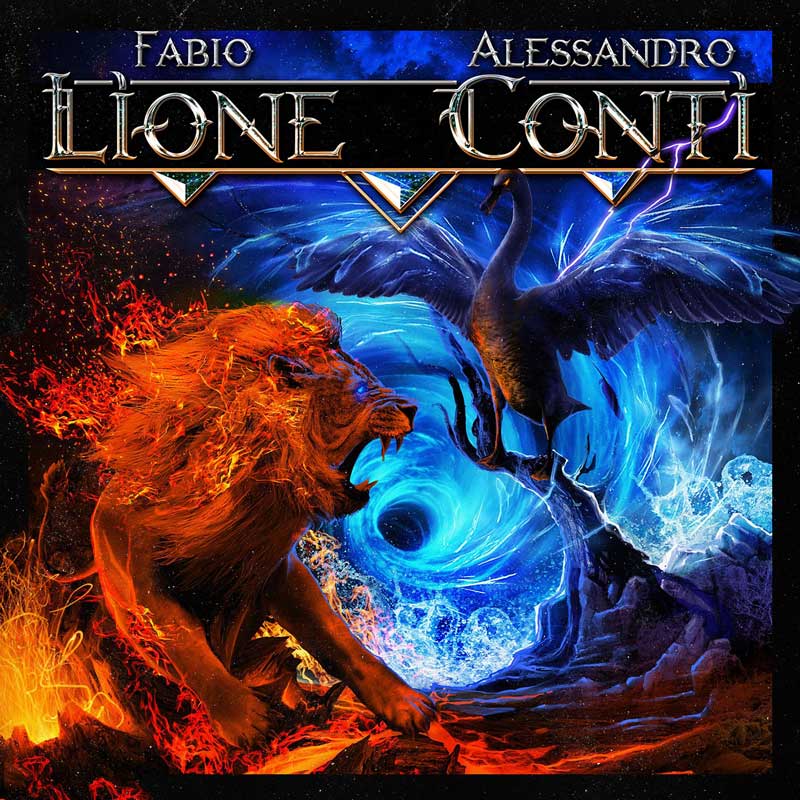 As the title suggests, this album is all about Fabio and Alessandro, or better put, the spotlight is stolen by the astounding vocal performances. While both singers may be best known as the voices of RHAPSODY, this is not a RHAPSODY album by any means. There are none of Luca Turilli‘s neo-classical guitar licks or Alex Staropoli‘s epic orchestrations here, instead the compositions are less flamboyant and ostentatious, allowing for a greater emphasis in the singing department. How did this songwriting approach work for two people used to singing over way more complicated and bombastic music? Surprisingly, quite well. It is apparent that these songs were written specifically for Fabio and Alessandro, which wasn’t probably an easy task as their vocal styles are different – despite some might think they sound the same based on the fact they both have sung for RHAPSODY. Most of the tracks start off with Fabio singing the first half and then Alessandro singing the other half. It wouldn’t have been a surprise if Fabio or Alessandro sang lead for an entire song with the other chiming in every now and then. But that is not the case here, each song is written to cater to both singers and the two complement each other exceptionally well.

Now while the music here is somewhat less unpretentious that doesn’t mean the quality of the album suffers. The album is jam-packed with catchy melodies, excellent guitar riffs, and some symphonic elements thrown in, plus a monstrous, flawless production – the music strikes a balance between classic power-metal, more classic heavy-metal and even some prog-metal. Think of the overall sound like a marriage of powerful structures in the vein of KAMELOT, HELLOWEEN and ANGRA with slightly progressive parts reminiscent of ELDRITCH or VISION DIVINE: The compositions are mature and unerringly hit the bull’s eye. This isn’t just some quick cash grab that was thrown together in a hurry with two famous names slapped on the title, instead it could be defined as the Italian version of the acclaimed Frontier Music‘s project ALLEN/LANDE (featuring legendary metal vocalists Russell Allen and Jorn Lande). And while the stars of the show are clearly Fabio and Alessandro, it’s important to remark the brilliant performance of the other musicians involved here; more specifically the man responsible for penning the songs that made this collaboration fruitful, plus handling the guitars on the album: Simone Mularoni. Truth be told, some of the music on this album wouldn’t feel out of place in a DGM record mostly thanks to the intelligent arrangements and the symphonic elements included.

Some people, including most hardcore RHAPSODY fans, may be asking themselves if they should buy this album. If you are expecting to enjoy a RHAPSODY clone, you better try your luck somewhere else. Nevertheless, if you are up for a slab of melodic metal/hard rock songs designed to allow two talented singers, conducted by a skilled songsmith, to woven memorable vocal performances – thus creating a truly pleasing listening experience – you have now found what your next album purchase will be.