LABYRINTH‘s second full-length, “Return to Heaven Denied” was a breakthrough for the band, both musically and commercially. Released at the time when symphonic metal reached its peak, and bands like Rhapsody, Blind Guardian, Virgin Steele or Savatage were on the top of their game, the Italians proved they were a force to be reckoned with, skillfully combining epic melodies, hardness and technical finesse with all-encompassing lyrics plenty of heartbeat in the most positive sense. The record blended together fast Italian-style power-metal, furious shredding solos, neoclassical keyboards and the phenomenal voice of at-the-time newcomer Roberto Tiranti, all of them in the appropriate dosage, ultimately turning into a razor-sharp, hook-laden exercise on energetic harmonies with more than a touch of prog in the songwriting. Guitarist and mastermind of the band, Olaf Thorsten said once that “Return to Heaven Denied” is the album of their lives, and many couldn’t agree more.

Now, only twenty years later, the band is about to release a CD/DVD and Blu Ray edition of their second time ever playing “Return to Heaven Denied” back to back live. In the spring of 2016, the band’s founding members, Andrea Cantarelli and Olaf Thorsen received a call from Frontiers Records asking them to discuss with vocalist Roberto Tiranti the possibilities of a reunion with a return to their classic sound to mount a comeback for the band. After much discussion, the guys agreed to make an album and also to make a very special appearance at the the first annual Frontiers Metal Festival. With a new lineup rounded out by drummer extraordinaire John Macaluso (TNT, RIOT, ARK), Oleg Smirnoff (VISION DIVINE, EDRITCH) on keyboards, and Nik Mazzucconi on bass, LABYRINTH returned with a superb album antitled “Architecture Of A God” (mixed by DGM‘s Simone Mularoni) in 2017, a record that encompasses all the elements the band was known for. And the agreed special live appearance was captured for an ulterior live release.

Filmed at the Frontiers Metal Festival in Trezzo Sull’Adda on October 30, 2016 LABYRINTH‘s revamped lineup performed the original 11 songs on the record in front of packed house that cheered, applauded and sang along every note. Olaf Thorsen said about the show “It was a real mix of feelings to play Return To Heaven Denied in it’s entirety as it was something which we never did before, not even during the many tours we did back in ’98-‘99! It is even crazier when you think that this was our very first live show with our new line up, but when we saw so many people from different countries singing every single song with us, we just felt that it has all been worth it. Unforgettable.” 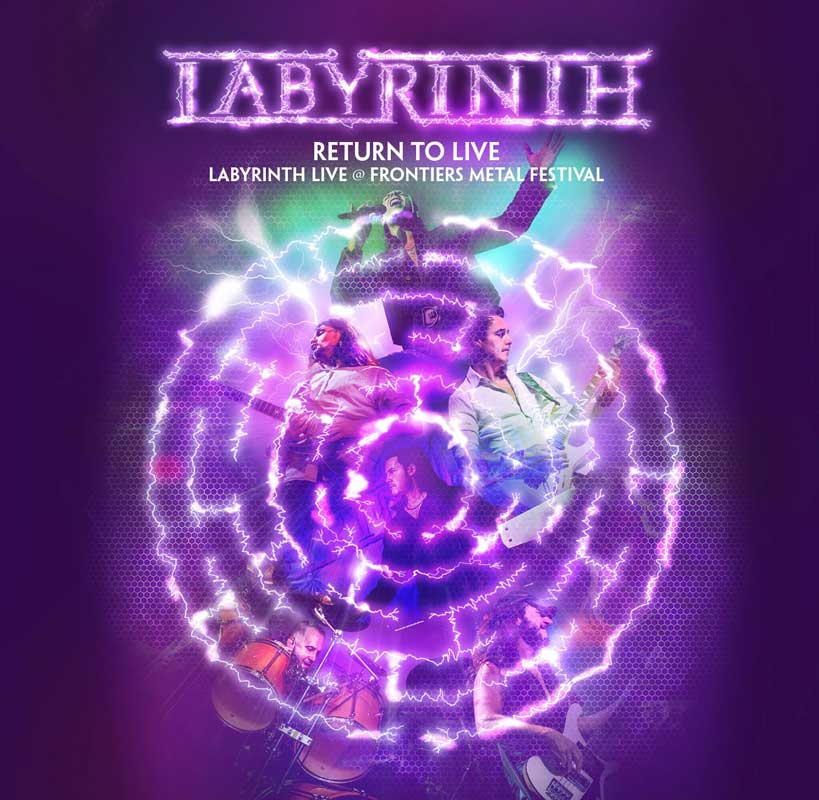 A fine example of a well edited concert footage, there are no interruptions, no senseless special effects, and no overenthusiastic editing making it too busy for the viewers to concentrate – just outstanding audiovisual excellence and a musician-friendly video effort where you get to see the instruments being played, as well as some overhead viewpoints and dual/triple screen segments featuring more than one player. During the fast-paced songs the camera view doesn’t stay in any of the musicians for more than 3 seconds in a row, but that’s video editing trend that began years ago and has been widely adopted as the norm, as much as it can be annoying for some. The picture quality, sound and overall mix are exemplary; but most importantly: the band absolutely nailed it, pouring out an energetic, crystal clear performance across the board. John Macaluso‘s drums are mercilessly pounded, Roberto‘s vocals are as delightful and impressive as I remembered them, hitting the high octave notes comfortably – his final screams during “Thunder” can send shivers down your spine – and the interplay between the rest of the band members exudes a dazzling playful mood, wrapping the presentation in an atmosphere of class and faultlessness, without losing a somewhat tangible feeling of urgency. This is simply put, pure and unadulterated LABYRINTH, serving up fast, power, and epic prog-infused metal anthems with unforgettable hooks.

Unquestionably a very enjoyable live document from a band some have considered the underdogs of the power-metal scene, this is arguably the ultimate audiovisual presentation of a momentous record for the genre, which despite the time passed certainly stays in the regular playback rotation for thousands of power/progressive metal fans. If you like your metal dipped with sheer drumming speed, high-pitched vocals and intense yet melodic shredding sections, you don’t need to look any further.