“Shapeshifting” is an apt title for the newest release by Joe Satriani, who has somehow managed to carve out a surprisingly long-lasting career by recording instrumental guitar rock records and consistently touring behind them. This being Satch’s 18th studio release, it would be easy to assume one has heard it all before, but as the record reveals, Joe still has plenty of interesting things still to say with his strings.

A new Satriani record is often a reaction to the one preceding it (in this case, it was 2018’s ironically titled “What Comes Next”). This is a stated intention of Satriani, who doesn’t want to repeat himself (if that can be helped within the confines of the instrumental guitar rock template). Many have tried to emulate Joe’s formula and fallen flat. It’s easy for an instrumental guitar record to get boring. What makes Satriani excel, aside from his uncanny playing abilities, is his ear for the song. He knows that first impressions matter and he ensures there’s a hook, a melody, something to grasp onto at first listen on most of his tunes. (The caveat to this rule is when he’s just pushing the exploratory envelope to see what’s possible in the sonic universe, of which he refrains from in this release).

The title track is the flagship opener, bursting onto the scene with a blasting snare roll followed by a funky bass groove and the signature Satriani tone demonstrating his capacity to create instrumental guitar tunes that retain interest with their verse/chorus structure and how Joe literally makes his guitar sing. The opening track is a rocker with some good aural variety in the layered tracks and a tad of signature weirdness melded with solid rock.

One of the ways Satriani keeps thing fresh is to change up the band supporting him. This time around, he enlisted Kenny Aronoff on drums, who toured with him both in Chickenfoot and The Ultimate Hendrix Experience. Donning the headphones to appreciate the depth of this recording, I was instantly struck at how loud the hi-hats and cymbals are in the mix! Aronoff hits really hard live, and maybe they wanted to showcase that in the studio a bit.

As a drummer, I don’t mind in the slightest, but it certainly stood out, as did the tambourine and cracking hand claps that make multiple appearances on the songs here, the first being the second song, “Big Distortion.” In Satriani’s interview with Sonic Perspectives Robert Cavuto, Joe divulged, “It was all about fun and the sound of that guitar. I have to remind myself it is okay to be light, just like it is okay to be heavy. It can’t all be about tragedy and its okay to have a song that is fun to listen to.” This anthemic rocker has a retro feel that’s easy to imagine being played in a sports arena to liven up a crowd between timeouts. It is exactly what it set out to be

“All for Love” pulls a 180 degree turn with its plodding, melancholic melody and delicate groove behind Joe’s cascading lead. The track features some tasty aural candy in the spacey background layers that drift around the controlled, weeping chorus. The song builds with some tension before retreating back to the mournful opening melody. It’s a beautiful track that’s more about the song than showboating. Unlike the next track…

“Ali Farka, Dick Dale, an Alien and Me” is an over the top statement that winds through an Indian desert before making its way to the beach for a bit of surf music fun. This is more of Satriani having a good time while displaying, “Look what I can do.” But just as the listener gets settled into swagger mode, Satriani pulls another U-turn. 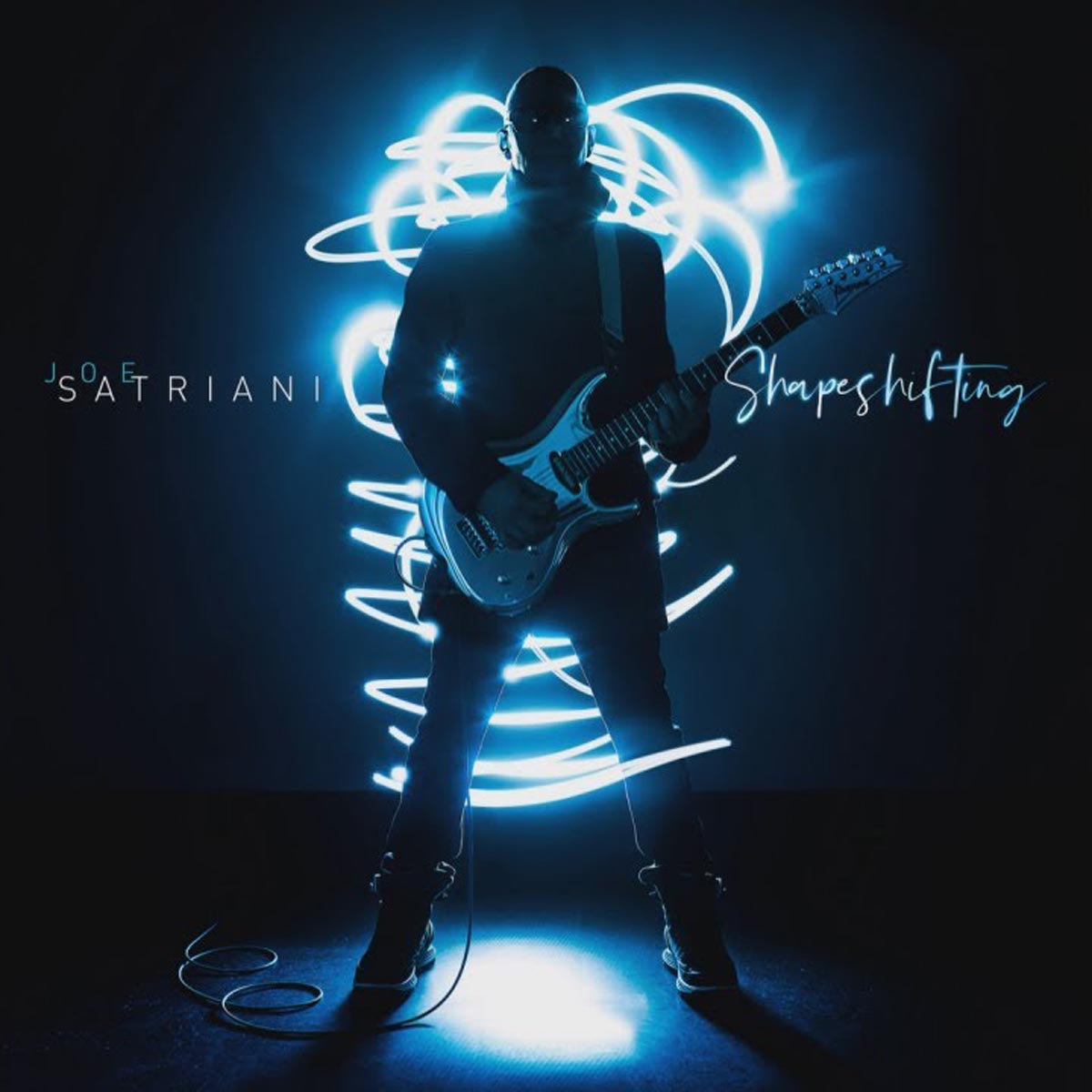 “Teardrops” is another slow moving, dynamic display of wah-wah, lead fluidity and chromatic chimes wafting over a slow walking bass that plays out like an infectious, lonely walk down a dark alley after a painful breakup. The thunderous hand-claps make their second appearance alongside a church bell tone that’s sure to transport an introvert to his happy sad place. This is a great example of Joe knowing that more isn’t always more. As he revealed in the aforementioned interview, “This song was very sparse, even on the original demo. Producing with Jim Scott, we noticed that it was more effective when we held things back. When we did the final mix, he wanted to hold things back even more. We turned a few things off here and there to create additional drama. The process of including the team into my fantasy or overblown feeling really helped everyone make that song unique and separate from “Big Distortion” or “All My Friends are Here.”

Turning that frown upside down instantly is “Perfect Dust,” a country tinged blues jaunt which sounds like something born out of the Texas Mud of ZZ Top territory. Hello, hand-claps again! Joe sounds like he might have been inspired by the tone of a telecaster and pedal steel on this one, and his playing is offset by a keyboard sequence in the chorus reminiscent of electronic pioneers Tangerine Dream. How does this all work together? Beats me, but it does if you can appreciate a melting pot of playing and don’t take your music too seriously.

The first single from the record, “Ninety Eighty” sounds like Joe channeling Eddie Van Halen before settling into a retro sounding romp that has the sound of a guitar hero seeking to deliver something signature yet attainable by adoring young players. It’s kind of a predictable track that might have fit on Joe’s breakout hit from 1987, “Surfing With the Alien,” but still a lively moment unlike anything else on the record.

“All My Friends Are Here” is a feel-good power riff that also might be one of Joe’s easier tracks to emulate, but that doesn’t make it any less satisfying. Add in what sounds to be some banjo plunking in the background and Joe’s fluid lead playing and you’ve got a fairly typical slice of Satriani that’s easy on the listener’s ears and mood. “Spirits, Ghosts and Outlaws” takes a rocking ride through a ghost town vibe that’s a tad spooky, driving and hard not to bob your head to. Some nice dynamics mid break let the rhythm section shine before the rhythm guitar roars on out of town. Cue the tumbleweed and dust kicked up as Joe exits the scene.

“Falling Stars” opens up with a slinky, creeping bass line groove that just sounds like a song that organically evolved from the three just getting in a room together and saying, “Let’s just jam and see what happens.” It’s delicate and dynamic, with Aronoff booming in the break before Joe rolling up his funky sleeves and digging into the groove with a slinky, spunky lead that explores the terrain until yielding to a few flowing notes of a piano that bring the journey to an end. 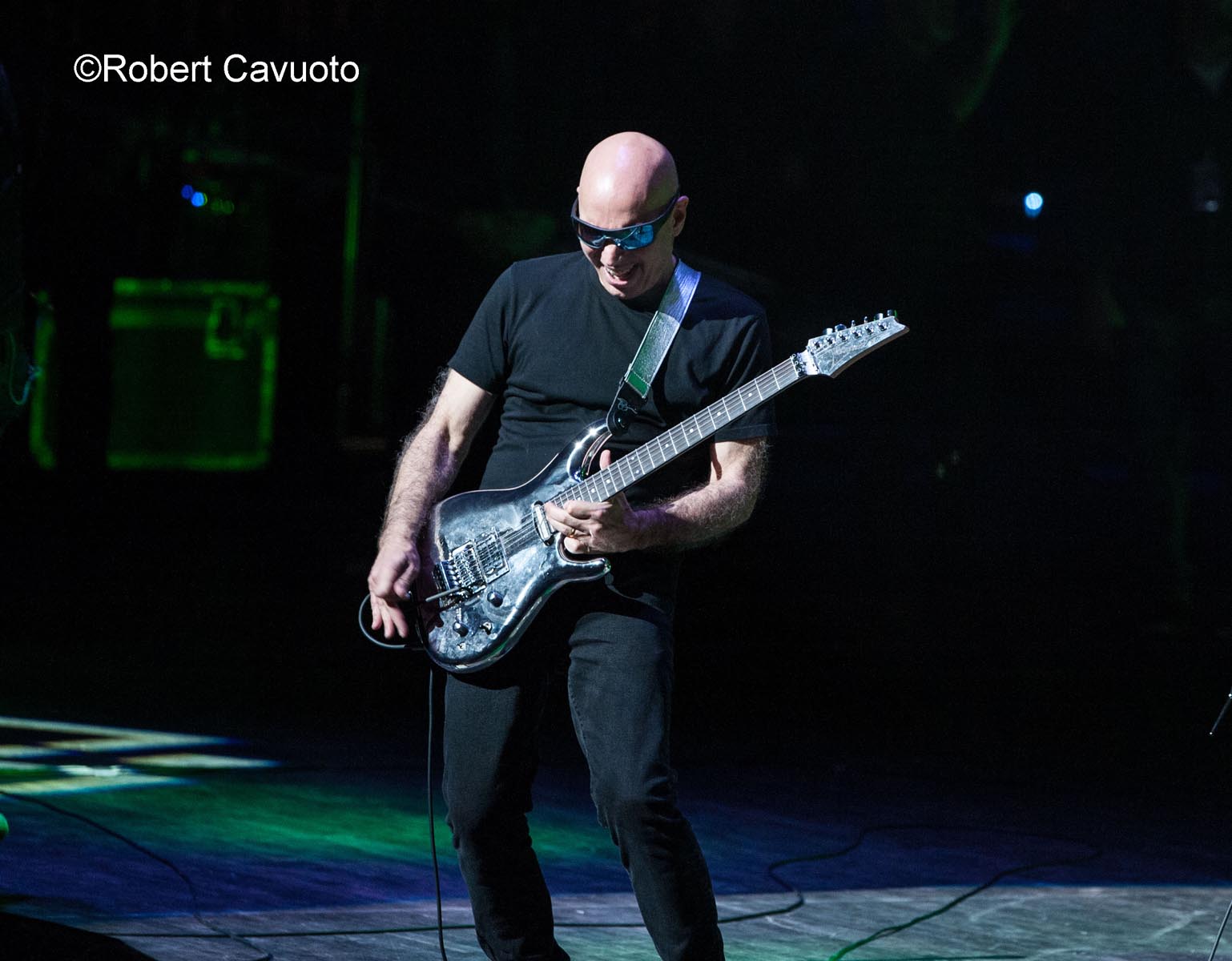 Piano isn’t typically a featured element in Joe’s music, but it takes a front seat on “Waiting,” another introspective track that opens with children’s laughter and a contemplative ivory motif with Joe’s guitar lightly wafting over the top like a glider breezing over the earth. This track displays Satriani’s capacity to play with appropriate reservation and delicacy when it best serves the song. You’d never guess that Spinal Tap’s Nigel Tufnel (Christopher Guest) makes a guest appearance playing mandolin. For real. He’s a master mandolin player off-screen. And while it doesn’t go to 11, this track is easily one of the prettiest moments on the record.

How do you follow that up? How about a sudden transportation to Jamaica? I mean, why not! “Here the Blue River” is a reggae ditty that melds Satriani’s signature tone to a smoke screen of weed on the beach. Shapeshifting, indeed. Credit to bass player Chris Chaney (of Jane’s Addiction) for shape-shifting himself throughout the record in demonstrating a ton of versatility in the unobtrusive presence on the bottom end throughout that’s noticeable without really being so.

“Yesterday’s, Yesterday” is perhaps the least Satriani-like tune I’ve heard, opening with a whistled melody then followed by a very hollow sounding acoustic guitar and banjo doing what almost sounds like a soundtrack to a children’s country TV program. Probably my least favorite track on the record that, at just 2:49, is still too long. Preferences aside, it’s consistent with the overall “Shapeshifting” approach to the record that heralds in the return of loud hand claps and the end of one of Joe’s most varied but still listenable records.

Given its span of styles, one can only imagine the challenge of sequencing “Shapeshifting.” According to Joe, “We ended up trying eight different sequences and actually listened to them as a whole album. We ended up using our second sequence which had 13 songs. We originally had 15 songs so we didn’t know if we would use 10 or 13. I was happy everybody agreed that the flow of the key signature seemed to be the most important part.”

This new release is undoubtedly an intentional response to Joe’s previous record, which was a very consistent rock-oriented record that lacked this record’s range of flavors but held up really well thanks to great songs and performances by Satch, as well as Glenn Hughes on bass and Chad Smith on drums. “Shapeshifting” features a different-but-very-talented rhythm section, a lot more stylistic territory, and some tasteful moments that slot it as a fun and unique addition to the Satriani cannon, even if for some die-hard hands it might be missing that one standout track that’s essential Satriani listening.

In some ways, it’s exactly what you expect to get from Joe Satriani, but in other ways it’s packed with diversity that manages to morph in style without being schizophrenic or boring. The bald guitar God somehow manages to extend his uncanny career with a new set of songs that feature some outrageous playing without sacrificing accessibility and memorability