Staring into its deadlights…

The story of Iron Fire is one of perseverance, as one of Denmark’s two premier millennial power metal exports (the other being Wuthering Heights) has seen its fair share of trials and tribulations over the years. Initially emerging from the wasteland of the mid-90s when metal was largely considered dead to the world, at least if rock radio and the broader entertainment media are to be believed, they initially struck pay dirt with a brilliant debut dubbed Thunderstorm; an amalgam of the speed and melodic grandeur of Helloween, along with an old school heavy metal sense of aggression informed by the earlier German contingent represented in Running Wild and Grave Digger. Barring a rather massive sophomore slump and interlude into late 80s power ballad cringe in On The Edge, which almost sank this powerhouse of an act just as the wind was at its proverbial sails, the formula of the debut came to define this band’s sound up until the close of the 2000s.

Though much of this band’s background has seen an equal footing between the melodic splendors of their power metal influences, the current decade has seen a rather interesting evolutionary shift in favor of a more bare bones, aggressive approach more in line with the German heavy/speed metal character of this band’s original sound. This heavier sound has since gone through three interesting incarnations that revolve around more of a horror-based theme rather than the typical swords and sorcery pursuits of the sub-genre, with 2012’s Voyage Of The Damned tapping the intergalactic terror of Event Horizon with keyboards blaring alongside a modernized riff assault, while the more rugged and stripped down metallic thunder of 2016’s Among The Dead played up the zombie apocalypse theme. Continuing down this road of thrills and chills is Iron Fire’s third and latest installment Beyond The Void, which sees a similarly stripped down, almost thrashing character of sound similar to the previous album merge with their older 2000s formula, and delves head first into the Lovecraft-inspired cosmic horror that is Stephen King’s It. 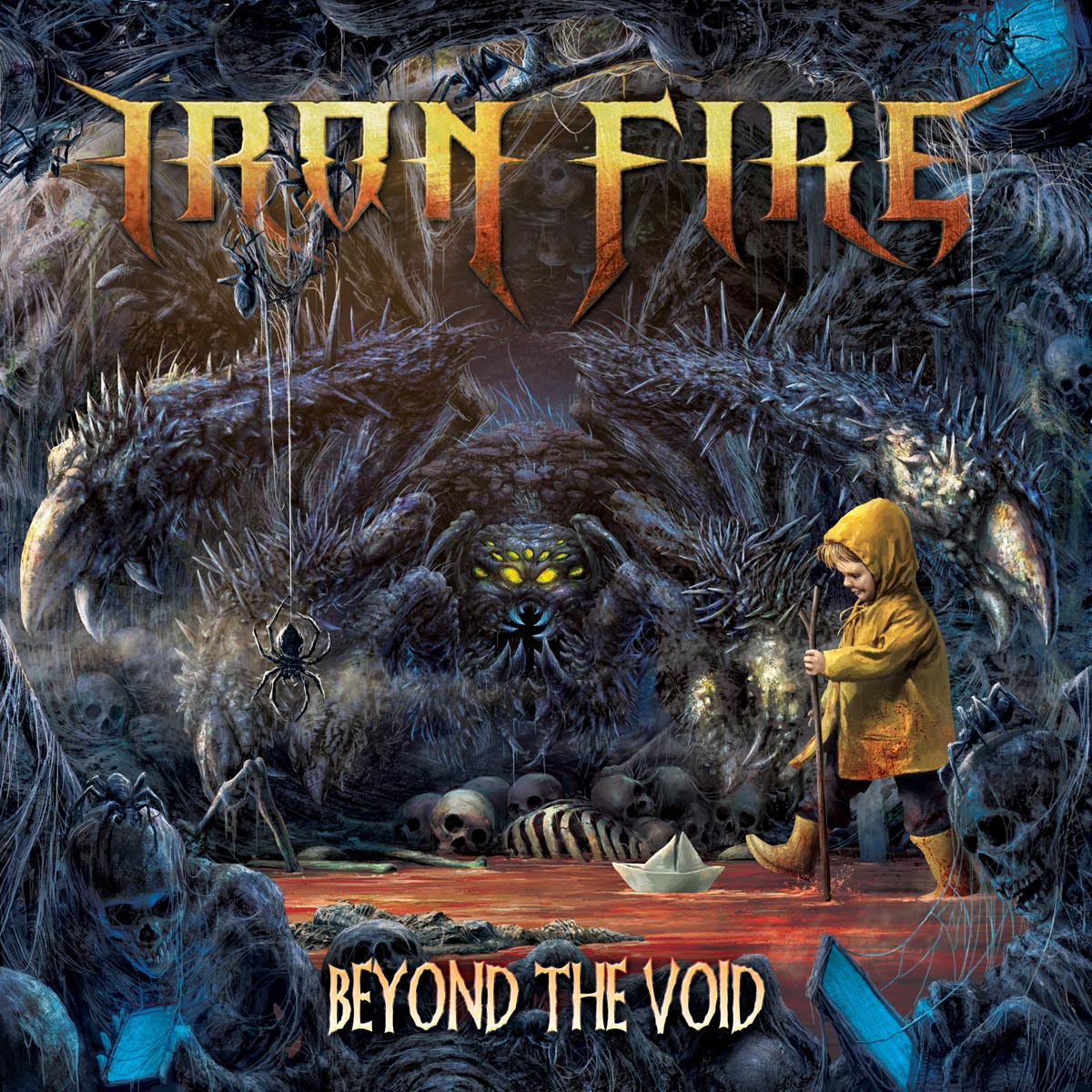 “Beyond The Void” Album Artwork

The convergence of the chugging heaviness of Among The Dead with the more nimble and speed-happy character of 2009’s To The Grave is very much a fitting eventuality for this band given the current fold of musicians involved. The same power trio format that has been in place since the previous album definitely lends itself to the sort of working class mode of speed and fury typical to the likes of Rage and Grave Digger, and the presence of the same drummer that lit up the kit on this band’s debut album Gunnar Olsen being in congress does make one wonder why the last LP wasn’t quite as geared towards this band’s primordial sound. Overall the album exudes a sense of agile flash that could pass for late 90s Gamma Ray when Dan Zimmerman was at his peak as a drummer, while the thick, muddy bass tone that lead vocalist and founder Martin Steene puts on display is raunchy enough to pass for Doug Pinnick when not rumbling away like Joey DeMaio. In fact, though long time guitarist Kirk Bacharack adds a great deal of flash whenever he rips out a solo, Steene’s bass playing provides the bulk of what makes this album stand out from anything they’ve done previously.

Generally it has been more the exception that Iron Fire ventures into epic length songwriting, but this time around they’ve opted for a 100% compact approach that mirrors the consistent under 5-minute long approach of Thunderstorm, while still coming off as epic in character. The contrast of subdued, almost dreary semi-balladry with slow-paced stomping the typifies “Judgment Day” and its slightly faster cousin “Bones And Gasoline” channel this concept the most blatantly while also displaying Steene’s unique trifecta of deep gothic croons, nasally mid-ranged snarls and occasional death-like barks. Nevertheless, these songs prove to be slower exceptions to a largely speed-obsessed rule where occasionally grooves are rounded out by unadulterated speed. On the more moderated side of the spectrum is a smattering of highly catchy anthems like “Beyond The Void”, “Wrong Turn” and “Old Habits Die Hard”, while things launch into full on speed thrashing fury on “To Hell And Back” and “The Devil’s Path”, blurring the lines between where Grave Digger ends and Destruction begins in the process.

Perhaps the only criticism that can really be launched at this masterful display of effective songwriting and musicianship is that it doesn’t really delve too much into the atmospheric side of things, which would seem an obligatory pursuit for any album sporting an intense cover art that basically anticipates the upcoming second part of the 2017 remake of It. In the end, it is a really small quibble launched at an album that basically succeeds in making three musicians sound like eight or nine of them, not to mention one that is about as memorable as 2012’s Voyage Of The Damned despite not being nearly as dense and symphonic in demeanor. There is very little going on here that wouldn’t be expected by anyone who has followed Steene and company’s career since the early 2000s, which is what makes it work in the same way that Grave Digger and Rage have continually made a very straightforward formula work so well. One passing glance into this band’s deadlights, and it is all but guaranteed that you will want to be there.

“Beyond The Void” Tracklisting:

Almost three years to the day, or 1/10th the time that “It” waits to terrorize the Maine town of Derry, Denmark’s millennial power metal heroes return from the zombie apocalypse to venture into the realm of New England styled cosmic horror.