On Valentine’s Day the world was presented with the barren aural landscapes of Ihsahn’s “Telemark,” the first in a promised duo of EPs that would grace listener’s ears in 2020. Shortly after its release the world descended into a similar state of desolation as could be found in the shrieking winds of black metal’s embrace, splintering individuals into the sudden confines of solitude. For understanding oneself and the bleak shades of grey which painted the skies of isolation, there was no better place to turn than “Telemark.” But September is poised to see the rays of sun breaking through the clouds with the much-anticipated follow up, for the tender reaches of “Pharos” balance the scale which had previously tipped towards Ihsahn’s much-beloved extreme metal roots. Now the storied progressive metal artist adds yet another unique chapter to an already expansive catalogue, one which strays further into the light and the translucence of the soul than any of his prior explorations. Filled with clean vocals, bright melodies, and memorable choruses that segue effortlessly from poetic verses, there is no doubt that the spirit of “Pharos” lives up to its name.

Ihsahn’s work has always turned heads with its scope of inventiveness, be it the arctic extremity of Emperor’s early days or the avant-garde intrigue of solo albums such as “Das Seelenbrechen.” Above all else, Ihsahn has consistently shown his devotion to ensuring that his art is limitless in its reach, kindling a rare beauty that entwines inseparably with each sonic wonder he creates. In this regard “Pharos” is no different, and any soul which balks in surprise at its somewhat novel direction simply has not been paying attention to Ihsahn’s creative history. Walking new paths is the definitive characteristic which ties Ihsahn’s discography together, be it the Norwegian howls that comprise the landscape of “Telemark” or the delicate choruses which weave the verses of “Pharos.” The influences which appear on “Pharos” are those which were present in small glimpses before, but are now given the chance to take center stage in a more tentative, gentle light than the black metal expressiveness of “Telemark.”

It would be something of a misnomer to characterize “Pharos” by nothing more than its brightness, but when contrasted against the tone of “Telemark” there is no more apt descriptor. Yet opening track “Losing Altitude” shows the precision of Ihsahn’s imaginativeness with a sullen, melancholic approach to the darkness in both its slow progression and ominous guitar lines. It also demonstrates the patience and maturity of an artist who is capable of embracing stylistic minimalism while retaining the ability to invoke atmospheres of incredible depth. As stripped-back as “Losing Altitude” remains throughout, sparing in its instrumentation and additional effects, there is no hesitation in the advancement of its cold tides. Soft and sweeping sound effects akin to those of a lighthouse fill out the background of Ihsahn’s voice, evoking imagery of fog resting over murky waters. Forgive the moments of electrified chords cutting through the near-silence in explosive bursts, this track captures the spirit of a rainy afternoon made bitter by excessive introspection. Perfectly timed cymbals resound at irregular intervals throughout the duration of “Losing Altitude,” expressing compositional skill which adds to the album’s overall appeal in carefully balanced songwriting.

Lead single “Spectre At The Feast” is perhaps the most definitive track of the EP, combining dark undertones with a more vibrant exploration of melody throughout. A captivating and almost angelic opening passage leads into near-isolated vocals, rising above a gentle echo of drums in a clear appeal to simplicity. Despite the intense piquing of instrumental arrangements between verses, the transitions between vocal-led passages to a reverberating chorus tie together a track which is one of the most piercing and memorable from the EP as a whole. The lyricism of “Spectre At The Feast” mirrors that of “Arktis” in both content and organization, but its radiant pop structures pull away from the inherent darkness that has long infused Ihsahn’s work.  As for the last original track on the album, the title track “Pharos,” this final foray into softer original work is absolutely haunting. While “Spectre At The Feast” is haunting in the way one might expect ghosts to ceaselessly mourn shattered glass amidst crumbling ruins, “Pharos” is more grounded  than ethereal. Each note is a direct plea to incredibly human feelings, those that come with love and loss, punctuated by brief periods of thundering drums and resonant choral vocals. 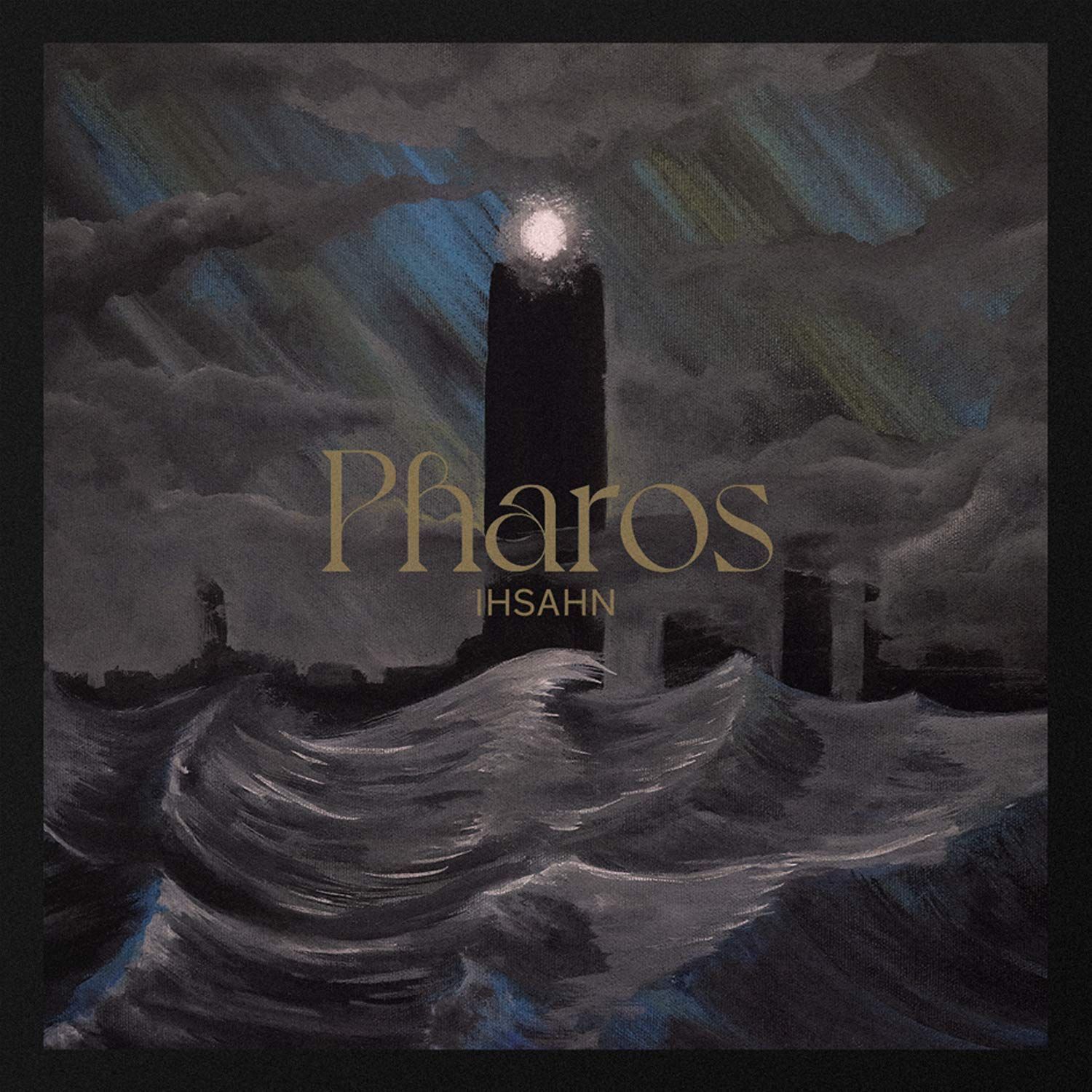 The EP’s first cover is yet another union between Ihsahn and accomplished vocalist Einar Solberg, a pair of artists who have partnered with one another on numerous occasions. Ihsahn has often cited admiration and inspiration taken from hit Norwegian pop band A-ha, and there was no better choice to embody the wistful heavens of “Manhattan Skyline” than Solberg’s soulfulness. In a similar dark-pop vein as Leprous’ recent album “Pitfalls,” this cover generates excitement not just through its faithfulness to the original, but in the vocal abilities of one of the metal scene’s most sought-after centerpieces. There is no question that Ihsahn’s love for A-ha was poured into this rendition of “Manhattan Skyline,” and the resulting track is one which sounds almost as though it was always written for Ihsahn to embrace at some point. Though notably different from the covers which concluded “Telemark,” “Manhattan Skyline” is yet another glimpse at the deep ties to Norwegian culture which persist throughout Ihsahn’s creative history, providing yet another thread to tie the two complementary EPs together.

Of the covers which Ihsahn has done to date, none stand quite as impressive as the vulnerable, exposed heart of “Roads.” A cover of Portishead’s hit song, this track reveals a side of Ihsahn which has only been glimpsed previously through the lens of aggression. The only word which can describe its touch is one rarely applied to metal artists at all for fear of offense: “Roads” is a look at a soul laid bare, a portrait of human fragility. With Ihsahn taking his voice in a higher pitch that teases close to its breaking point, each word accents a soft pleading which perfectly captures the atmosphere of the trip-hop original in a way which divorces it all but entirely from Ihsahn’s existing legacy. There is a comforting warmth in what feels like an open exchange between artist and listener, as “Roads” is steeped in graceful melodies which perfectly compliment the vocal intonation Ihsahn achieves. Given that most know Ihsahn for his unmistakable and often tormented howls, there is also appreciation to be found for the technical execution and ambition which led to “Roads” placement as the conclusion of “Pharos.” Though a cover, “Roads” is a fleeting glimpse at the glistening gossamer which holds together the human heart, shown to the world through Ihsahn’s eyes.

There is a sensation of fullness and satisfaction when this brief foray through the more mild and plaintive textures reaches its conclusion, one which fits the potential of the creative mastermind behind its crafting. Fans expecting an output along the lines of “Telemark” will be sorely disappointed, but those who open their hearts and minds to the poignant rays of starlight filtering through the stained glass of Ihsahn’s expertise will find boundless riches. “Pharos” and “Telemark” combined tie together the two extreme ends of Ihashn’s career with grace and poetic foresight, leaving the future wide open with potential for any number of stylistic endeavors. Perhaps some of Ihsahn’s most personal and intimate work yet, “Pharos” is ready to serve as a beacon for all of those who seek its guiding light.

Ihsahn's second EP takes a dramatic dive from the discordance of its predecessor and instead explores pop-rock melodies with graceful minimalism. A testament to Ihsahn's boundless creative scope and unceasing inventiveness, "Pharos" serves as an an expert foil to a legacy filled with extremity.