Open the chronicles of a bygone past.

Heroism is a concept that has been associated with power metal for about as long as the sub-genre has been in existence, yet over the years it has seen a number of varying modes of expression. Since the early days of the European power metal revival, there was an unofficial rivalry of sorts between the older school, heavy metal and USPM-rooted approach embodied in the early works of Hammerfall and a host of German and Swedish acts that hearkened back to the days when heavy and power metal differed only in degrees of speed and technical prowess, while a number of bands in southern Europe such as Rhapsody and Skylark were dabbling in a campier and more saccharine-sounding take on the Helloween approach of soaring melodies and infectious hooks, spearheaded by a barrage of orchestral bluster. By the turn of the millennium, however, a small number of bands were seeking after a middle ground between these two fringes, and one of the more intriguing bands to trod this path of epic splendor tempered with old school metallic sensibilities was Hanover’s own Human Fortress.

The resulting sound that was presented by this sextet upstart outfit could be likened to a hybrid of 80s metal orthodoxy and a more toned down epic atmosphere more readily compared to the smaller chamber orchestra sound of the Baroque era (as opposed to the Wagnerian bombast of Rhapsody). Though emerging right in the thick of the early 2000s when excess became synonymous with the European scene, this band presented something a bit more stripped down and rustic in character, all the while still embodying that lofty visual of a master swordsman seeking adventure across the distant horizon. The lyrical approach largely conformed to the medieval gallantry and chivalry that was occasionally employed by Hammerfall, but in a far more concentrated and pronounced fashion that blurred the lines between being metal fit for the live venue and a grandiose soundtrack for some cinematic remake of the tales featuring the likes of King Arthur and Merlin. It was a brilliant presentation that spanned two glorious albums in the early 2000s, spearheaded by the old fashioned, gritty shouts and calls of front man Jioti Parcharidis.

As with many grand undertakings in the metallic medium, the original incarnation of Human Fortress was short-lived, largely due to the aforementioned lead vocalist seeking a more visible and traditionally rooted gig with Accept’s famed former axe-slinger Herman Frank. Coinciding with a general decline in interest in the millennial power metal sound, the remnant of the band, which had also seen the exodus of drummer Apostolos Zaios and guitarist Volker Trost, the remnant of the band opted to attempt a complete revamp of their sound to appeal to the modern tendencies of the current metal scene, drawing inspiration from the groove-oriented material that had similarly influenced Steel Attack’s “Carpe DiEnd” and Elvenking’s “The Scythe”. Despite having a solid lineup on paper, with the particular case of former Galloglass front man Carsten Frank now on board (his former band explored the same stylistic niche that defined Human Fortress’ earlier works), the resulting 3rd studio LP in 2008’s “Eternal Empire” was a complete flop, lacking any sense of direction and being dominated by indistinct musical collages of clashing ideas and ineffective melodic hooks.

Though the late 2000s proved a bad time for this fold, the following decade would see their prospects for a brighter day renewed. Having recovered the services of Zaios and Trost, though sadly failing to keep Parcharidis in the fold due to his ongoing health concerns, a needed course correction would be made towards the same stylistic paradigm that had originally put them on the power metal map. Former Adagio and Revolution Renaissance vocalist Gus Monsanto proved a competent replacement at the helm, and with a new bassist and keyboardist in tow, Human Fortress found themselves back on track as they rounded out the 2010s with a trilogy of epic-tinged power metal albums that came fairly close to matching the glory of their formative years. Having now surpassed 20 years of existence, this extensive history of musical highs and lows has now been summed up in the band’s first official compilation release, dubbed “Epic Tales & Untold Stories,” and while not quite a best of offering in the proper sense, it stands as the perfect roadmap of where the band has been and where they are likely to go for any newcomers to their music. 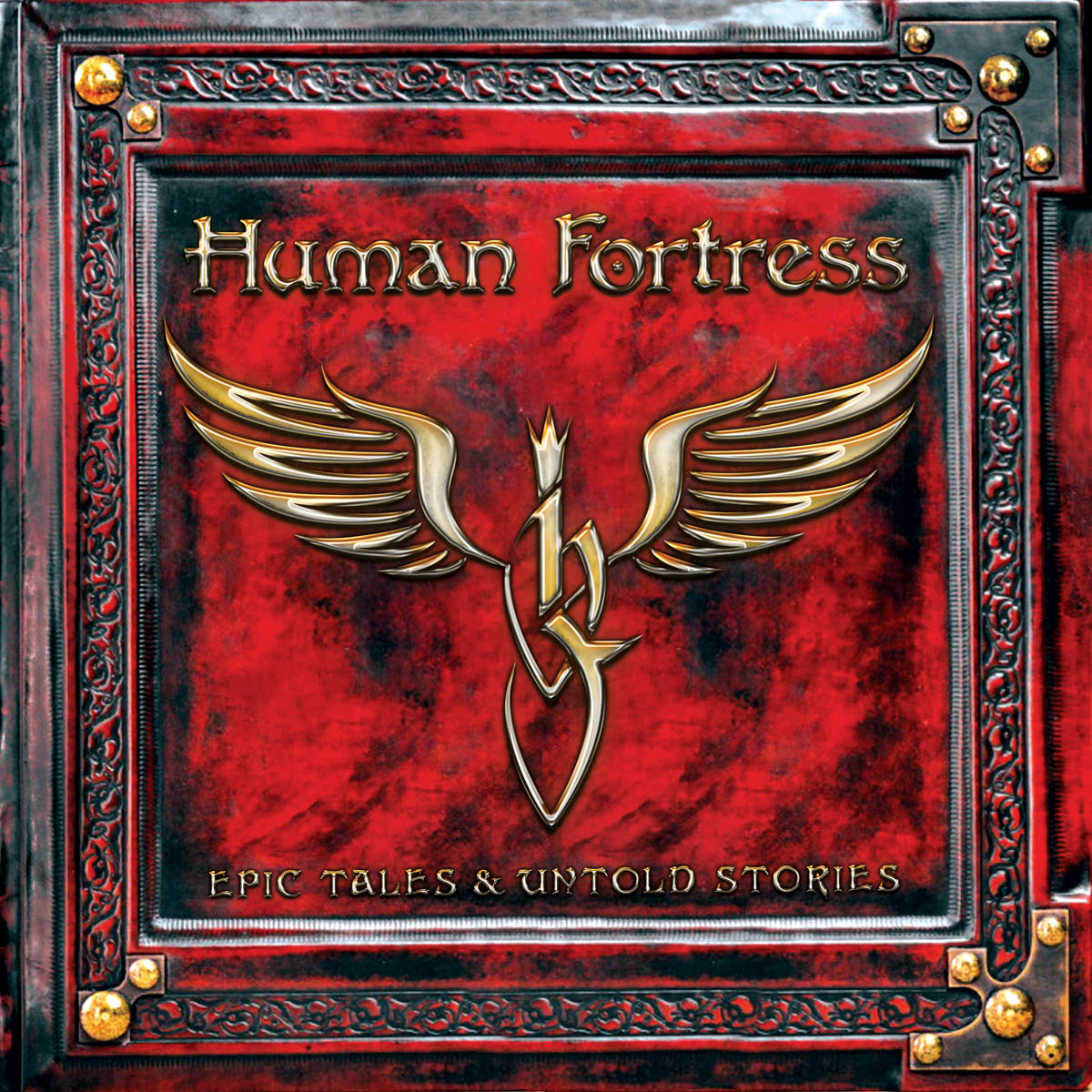 To any mainstays who have followed this outfit throughout their tenure, the first half of this offering is where the real goods are delivered. The eight songs contained within, consisting of new material and unreleased/rare material that has been rerecorded, could function as their own LP, and deliver a powerful array of grandiose melodic hooks and lofty musical scenery. The opening anthem “The Grimoire” has a sort of melancholic, folksy character to it that, when combined with a soaring vocal display out of Monsanto, all but perfectly recaptures the grandiose atmosphere that made “Defenders Of The Crown” this band’s magnum opus. More driving metallic riff monsters such as “Vain Endeavour” and “Cruel Fantasy” have a bit more bite to them and lean back towards the slightly rawer character of “Lord Of Earth And Heaven’s Heir,” while the smooth luster with a punchy guitar attack embodied in “We Are Legion” and “Disappear In Dark Shadows” shores up the present middle territory between the two aforementioned sounds that has come to define the current incarnation of the band.

The second half of this compilation is where the band’s extensive past is featured in a series of brilliant selections from the early 2000s and the 2010s, demonstrating the stylistic continuity that has been maintained from the early days with Parcharidis at the mic and the current, Monstanto-helmed era. Those unfamiliar with the good old days will note the blatant medievalism drenched over the driving war anthem and title song from the debut album, while the speed metal-infused “The Dragon’s Lair” will appeal heavily to fans of mid-80s Helloween. Likewise, the more polished yet equally powerful bluster of “Defenders Of The Crown” and “Gladiator Of Rome (Part 1)” will strike a chord with fans of Helloween and Iron Maiden alike, while the gallant march and folksy swagger of “Border Raid In Lions March” will draw forth the fantasy LARP enthusiast of the metal head persuasion. Compared against standout offerings from the current incarnation of the band such as “Thieves In The Night”, “Lucifer’s Waltz” and “Dark Knight”, this is a band that has lost none of its potency over the years, save the rightly snubbed “Eternal Empire,” which has mercifully been omitted from consideration here.

While veterans of this style with some degree of familiarity of this band’s past material will be more drawn to the impressive display of exclusive material found on the first CD of this offering, as a whole, this is a solid mixture of old and new that stands to be heard from start to finish at least once. One could almost designate the sub-headings of now and then to the respective CDs included in this set, and through both get a bit of an inkling of what will lay down the road for this fold as the 2020s continue. It’s prime cut for those who like their power metal with a healthy amount of keyboard and orchestrated detailing, though it will appeal almost equally to those who like a more back to basics approach as embodied in the early offerings of Nocturnal Rites, Hammerfall and The Storyteller. Though we were born a bit late to throw on a chain-mail shirt and charge against the enemy with sword and shield in hand, this will give all who hear it a taste of what it would be like had we been so disposed.

One of the wildcards of the European power metal scene that helped usher in a niche middle ground between the more conservative heavy metal and newer symphonic camps recalls their past and drop some hints of a similar future.