In a truly diverse melting pot of stylistic daring, “To Fathom the Master’s Grand Design” is an authentic display of musical inspiration taken from around the globe and throughout metal history. Danish extreme metal group Horned Almighty is an unabashed amalgamation of brutality in its many forms, blended together in a vat of vitriol to make a crunchy, exciting and doom-laden concoction of blistering speed oozing with misanthropy.

Lovers of all extreme genres of metal will find something that speaks to them in the accomplished and concentrated delivery of raw aggression found within the confines of “To Fathom the Master’s Grand Design.” Distortion clouds an atmosphere of heavy bass, thick with the texture of unrelenting guitars and cymbal clashes that pierce the dusk born in the gravelly roars of vocalist S. This is the creation of a desolate and wintery landscape promised by the likes of the legendary Mayhem, but it is not from black metal alone that Horned Almighty has crafted their unique approach to brutality. In pacing and in range of vocal delivery, S. appeals to the likes of death metal virtuosos, finding a complementary partner in the high pitch of unceasing drums that aren’t afraid to lay into the bass as though it were looking for a racing partner.

Some combination of black metal and death metal influences is far from uncommon, but the endless well of mystery and misery is deepened by the touches of doom that drag menacingly across instrumental interludes and in throaty roars that seem to echo into a mist of despair. Such influence is particularly noteworthy on opening track “Violent Cosmology,” which mounts from a crackling static into a speeding bullet of percussive ferocity. Though most of the track maintains a heavy influence from black metal in its most raw and unfiltered form, there are moments where the guitars catch and hold just long enough to bring the listener halting jolts of depressive melancholy. It seems nearly untouched as it wails into the listener’s ears, but Horned Almighty has commanded a tasteful balance between pure musical might and the nuance of stereo sound that gives additional dimension to already impressive musicianship.

There is not a single track on the album that escapes a blinding deluge of caustic fury, an overindulgent display of all things dark and depraved. It is in a nearly poetic fashion that Horned Almighty takes on the task of delivering “Swallowed by the Earth,” enticing with an undiluted dose of Danish winter, allowing the guitar to unfurl in a series of prolonged blows delivered by the talented hands of Hellpig. In verses of varying length, and instrumental passages that range from mere seconds to full minutes, Horned Almighty seem entirely self-assured in their ability to hold their listener’s attention as they traverse a musical catalogue that is broad in both scale and scope. To layer verbose lyrics lamenting (or perhaps celebrating) the downfall of man against a cosmic backdrop of sonic extremes is an act of acute musical vision and instrumental dexterity that Horned Almighty has tackled with apparent ease. 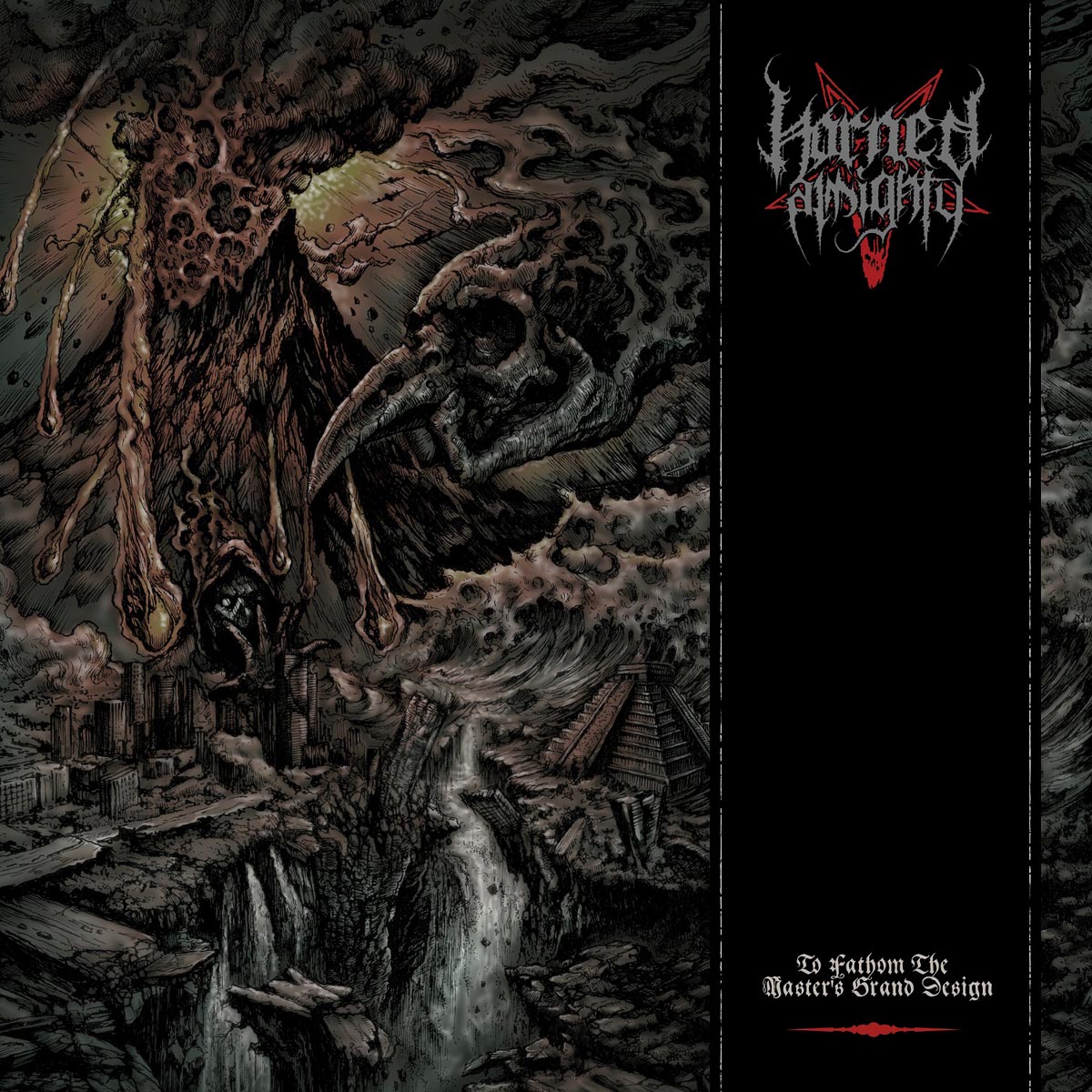 With three of the four musicians having been together since the band’s inception in 2002, such a natural transition between instrumental focus guides the stylistic transitions with a gentle touch. This intentionally seamless design seems entirely natural, rather than some forced feat accomplished in post-production alone. The album never jars listeners from a fluid listening experience as it adds in carefully selected components of various subgenres to enhance the delivery of night distilled into song.

Such longevity of the band is apparent in the careful pacing of each song, with some songs pushing the envelope in a near thrash-like fury, not least “The Great Death.” With five full-length albums beneath their belts, Horned Almighty know when to bring the thunder, and when to allow the keening echoes of static thrive among agonizing howls, creating the illusion of emptiness among rapturous noise. Prior albums, not least 2014’s “World of Tombs” were often touted as black ‘n’ roll, but “To Fathom the Master’s Grand Design” is a much more direct take on the spirits of darkness that conquered the black metal scene, using speed as a driver of intention, rather than a guide in style.

Their maturity is subtle, and their production is far from a bright polish on their work, but Horned Almighty’s diverse and poetic interpretation of metal is a welcome reminder of the diversity that exists within the most extreme subgenres. Cold in spirit but warm in its welcoming embrace of some inevitable destruction, “To Fathom the Master’s Grand Design” calls upon an appreciation for minute details and listeners hungry for the shroud of eternal night.

Borrowing judiciously from all genres of extreme metal, Horned Almighty have captured the fractured malignancy of mankind in an album that is as raw as it is unforgiving. Fluid in their demonstrations of technical mastery and cohesive throughout, the Danish quartet bring an equally exciting and palatable sonic offering to those that dare to embrace aggression and melancholy in kind.