When discussing about heavy-power metal bands who have made history, is very easy to realize that a few handful of countries like Germany, Finland and United States (to name a few) take the merit of producing the most widely acclaimed acts in the ever-expanding genre. And is very unlikely the land of the Patagonia is mentioned in the conversation. The “Argentine heavy metal” music movement originated in Argentina in the 1980s, and gave born to artists like Pappo (who created the band Riff influenced by the contemporary new wave of British heavy metal) V8, Almafuerte and Rata Blanca – probably the one that garnered the most international success, with an aesthetic similar to the contemporary glam metal -. The genre had a huge drawback in the early 2000s, first with the 2001 economic crisis, which forced many small bands to break up and second after The República Cromañón nightclub fire, tragedy that forced most nightclubs to increase their security; most of them had to close and the remaining ones became too expensive for heavy metal bands. Unlike Brazilian Metal bands like Angra, that have been well incorporated and marketed in Europe, bands hailing from Argentina have been loyal to their home country and continent, writing material in Spanish, and never letting go of the local scene that embraced them so tightly. Fortunately, the genre has had a slow recovery in the last 10 years, and some new promising bands have forged their way to the international scene, with HELKER taking the leading spot.

Formed 1998 in Buenos Aires, Argentina by guitar player Mariano Ríos and bassist Christian Abarca, the current HELKER line-up features guitar player Leo Aristu, drummer Hernán Coronel and one of the today’s finest metal singers – Diego Valdez. After establishing themselves as a cohesive unit, HELKER released three highly respected albums in their native language, “Legado Secreto” in 2001, “Resistir” in 2008 and “A.D.N.” in 2010; these albums helped a lot to build up a loyal fan-base not only by Argentina’s metal fans. 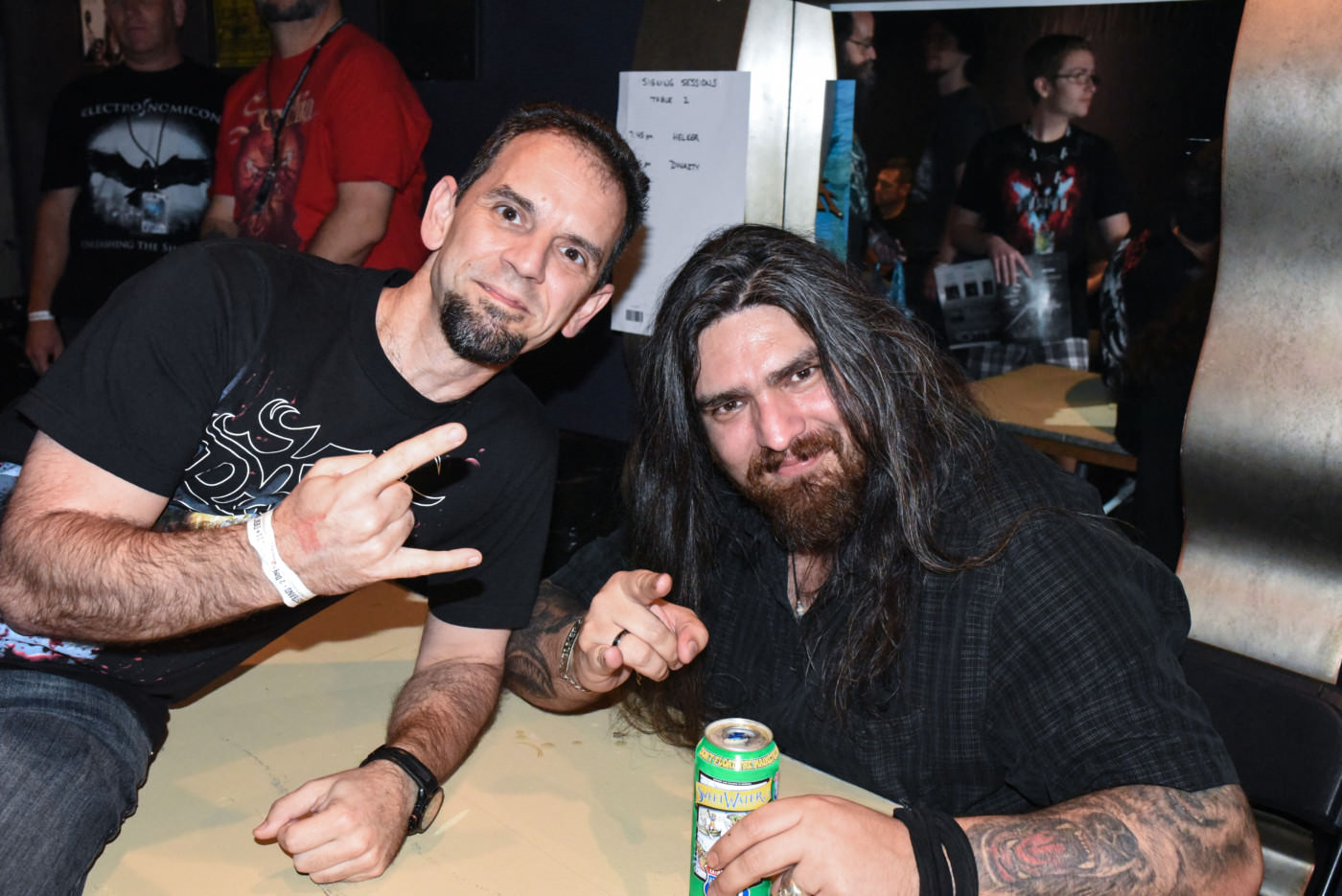 Diego Valdez from Helker and Joel Barrios at ProgPower USA

Since their inception HELKER has been one of the most active live acts in South America, touring with stalwarts like Primal Fear, Hammerfall, Stratovarius, Gamma Ray, Shaman, Sinner, Masterplan and many others, across Argentina and its neighboring countries. When HELKER played with Primal Fear in Buenos Aires, Primal Fear’s mastermind Mat Sinner was so amazed by the band, that he produced their first album in English language “Somewhere in The Circle”, which was released 2013 via AFM Records. I had the pleasure of beholding the band’s performance during the biggest annual progressive and power-metal event, ProgPower USA, back in 2015. It was the band’s first ever USA appearance and they couldn’t have done it better in front of a very demanding and genre-expert audience. I was greatly surprised as the band’s existence was some sort of a well-kept secret up to that moment.

Next May 5th 2017 their new album “Firesoul” will hit the stores shelves worldwide via AFM Records, and if you want to know what transpires throughout the 14 songs in the record, keep on reading. 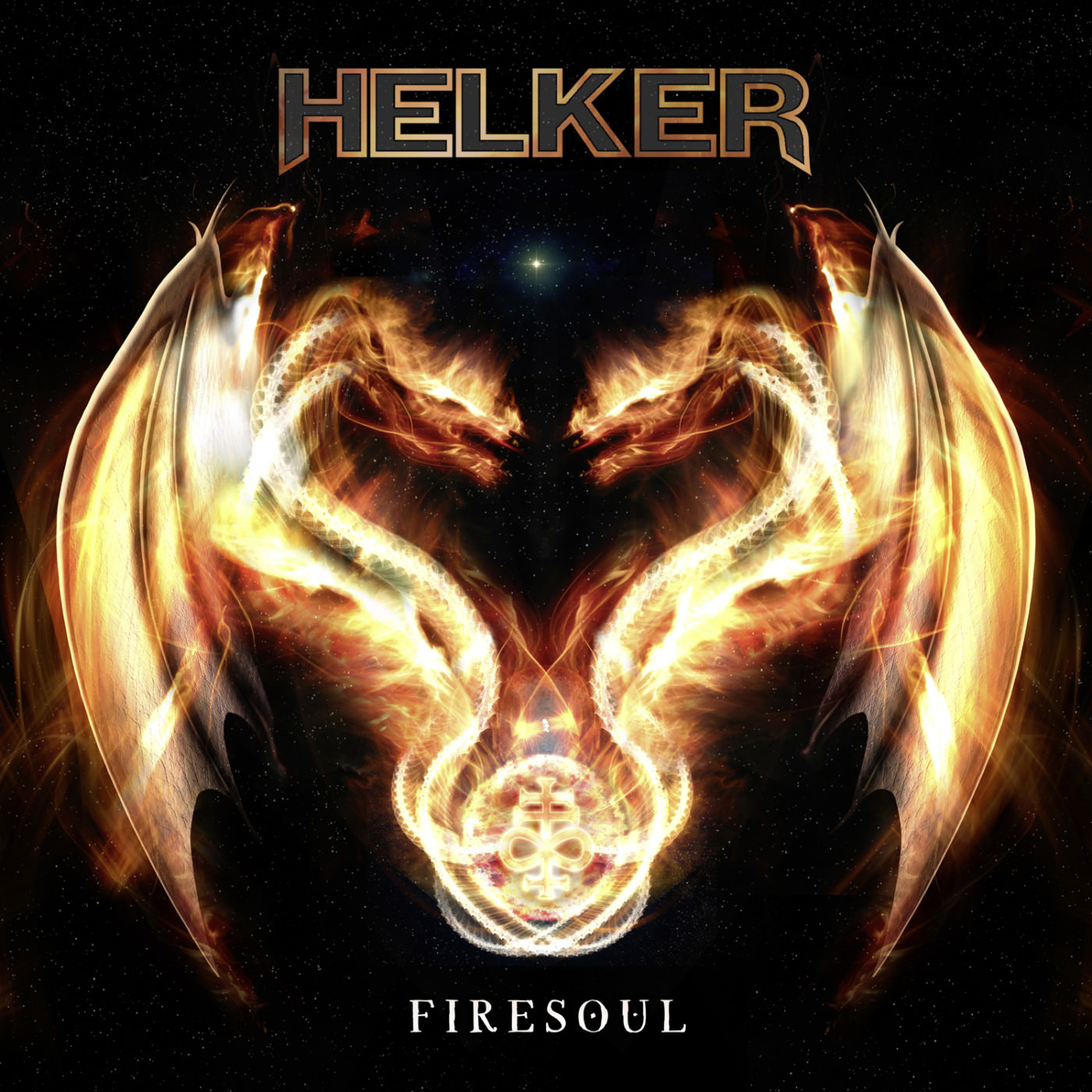 “Firesoul” start off with an eerie short intro named “Genesis” which seemingly blends with the first album anthem and first published single “Fight”. Clocking in mere 3 minutes, “Fight” is true slab of heavy-metal in its purest form and sets the mood for what will come. The sharp and hammering riffs bore a hole in your skull while Diego Valdez’s straight-forward and genuine power-metal registry summons the listener to fight for himself. Diego has always been praised for his uncanny resemblance with the late Ronnie James Dio, and on previous albums that similarity of singing style has suited perfectly the hybrid of heavy and power metal style his band offers, nonetheless in this tune he added a fiercer twist on his voice, which immediately reminds me of Tom “Ripper” Owens’ stellar performance in the polemical thrash-groove oriented Judas Priest album “Jugulator”.

“For All the Eternity” follows, picking up the pace with a galloping backbone wrapped in a relentless, in-your-face metal hymn, laced up with a catchy chorus. The song channels perfectly the glorious sound of Helloween circa their landmark “Keeper of the Seven Keys” albums, which believe me is not a comparison to be taken lightly. “Playing with Fire” tones down the speed, with a grooving initial guitar lick which repeats over and over (like a modern and much improved version a classic AC/DC riff) thrown on top of some compelling bass lines. Diego’s vocals return to the Dio realm, and his delivery sends chills down my spine, such is the similarity with the voice of the best heavy metal singer in my book.

“The One” immediately reminds me of their previous album “Somewhere in the Circle”. Its slow tempo and the triumphant nature of the main chorus, filled with wonderful harmonic and clear cut and sharp vocal layers is topped off with a slow guitar solo loaded with feeling makes it one of the album standout tracks. “Where You Belong” is another hard-hitting and potent-blasting composition that kept the craving in crescendo with a tasty riffing, impressive melodic ends and the unbelievable and strong vocal presence of Valdez. “You Are My Heart” is a mid-pacer with a clean guitar intro, bearing an outstanding guitar work from the duo of Mariano and Leo, plus some inspiring, ear-lingering, and overtly catchy vocals. “Empty Room” commences in a ballad mood with a delicate piano beginning and the heavenly vocal presence of Diego who plays with his tessiture to add a raw emotion to his voice, but the pace goes in-crescendo with layered choir-like melodies adorned by keyboard licks and a passion -charged guitar solo…  Who doesn’t love a ballad?

“Leaving Out the Ashes” is another track that will make you believe the restless spirit of Ronnie James Dio has found his final re-incarnation in HELKER’s singer. A mid-tempo stomp rocker, bearing swift and chunky twin guitar riffs, heavy bass and soaring mind-shattering vocals. With “Stay Away” and “Break Your Chains”  they press the speed pedals a bit and serve up a tune in the best vein of the typical German sound forged by such bands as Accept, later evolved into Helloween and Running Wild, with crunchy rhythms and total sing-along power metal choruses. These are two of the heavier tracks, the down-tuned guitars coupled with a massive tone, sounding really appealing. The album closes its curtains with the title track “Firesoul” and they don’t show signs of slowing down:  a four minutes’ riff-based avalanche of explosive guitar work and pounding drums, intelligently bordering the middle ground between speeding aggression and pomp-drenched 80s fanfare.

Two bonus tracks accompanied my promotional copy: “Rise or Fall” and a rendition from the Black Sabbath era with Ronnie James, the “Heaven and Hell” opening salvo “Neon Knights”. Even when the latter is one of the most covered Black Sabbath songs off the Dio albums of the 80s (and I have listened to many of them as my love for Black Sabbath and Dio is hard to surpass) this is arguably one of the finest covers of such emblematic anthem I have ever laid ears unto. They kept it as faithful as possible to the original and obviously Diego’s wailing voice made it even more special.

There isn’t a single dull moment on “Firesoul”, and it offers a certainly good balance between thumping riffs and more restrained chord arrangements, which allows Diego Valdez to command all attention, his pipes are impressive to say the least, and he steals the album spotlight once again, I could venture to say he totally owns the album. On the criticism side I would love to see them breaking the 4 minutes’ song barrier and stretching their musical pedigree a bit further, I’m sure they have what it takes musically to add a couple f-stops* of complexity to the songs making them a bit less traditional and likely more interesting. Mixed and mastered by Achim Köhler (Amon Amarth, Sodom, Primal Fear, Brainstorm) at Indiscreet Audio and produced by Mat Sinner, “Firesoul” production is nothing but stellar. True to their roots “Firesoul” will also be released in a Spanish version entitled “Alma de Fuego” (which will be available digital only) on the same release date.

An epitome of what true European heavy/power metal is about, HELKER has done it again, proudly weaving the Argentinian metal flag as high as possible during the process.  A catchy and extremely enjoyable record, intelligently flavored with a keen sense of melodies, “Firesoul” carries a strong appeal for hard and melodic-rock fans alike. More than a quarter of the year is gone and this record is now in my list of the best power-metal releases of 2017. Highly recommended.