There are rarely bands so full of youthful energy as Calgary-based thrash act Hazzerd, who are bursting at the seams with the newest wave of unforgiving speed and high-octane excitement. Upcoming album “Delirium” is a melting pot of pure inspiration, creativity distilled into a potent brew that strikes with a careful balance of technicality and creative virtuosity. Fueled by influences in thrash, punk, heavy metal and beyond, “Delirium” is an impressive sophomore album that splits its talents between explosive teenage angst and the visionary compositional abilities of an up-and-coming metal powerhouse.

Above all else, Hazzerd seem to be entirely unafraid to pursue their creative truth, pushing the boundaries of their style even after their 2017 debut album “Misleading Evil” was met with accolades from some of the most renowned voices in music. None other than Dave Mustaine noted Hazzerd as a standout act to keep an eye on following their debut, and artist Andrei Bouzikov (Skeletonwitch, Municipal Waste, Toxic Holocaust) gave his talents to the stunning and nostalgic cover of “Delirium.” While they may have been tempted to merely play it safe with an almost identical release in face of such immediate momentum, Hazzerd dropped “Delirium” in place of some weak imitation, a bold evolutionary statement that showcases musical talent in the spotlight of raw passion.

In a way, “Delirium” seems as though it has two distinct personalities, interwoven in a complex web that shifts in the light as passages flow from one to another. There’s the thrash-driven base that seems to seethe with an untempered juvenile anger, vocalist Dylan Westendorp voicing a near liquid hatred and anger across many of the album’s ten tracks. However, there’s a richer, more mature side that seems to instead favor pure heavy metal reminiscent of early Iron Maiden. At times there are tracks that proceed almost thoughtfully, allowing the bass to step forward in a hesitant depth that thrash alone rarely embodies. More so than merely allowing instrumental roles to slow and shift, Hazzerd includes a track that is a purely instrumental track, not unlike that of a touching rock ballad or explorative prog piece.

An example of the former is opening track “Sacrifice Them (In the Name of God)” shining in all of its aggressive glory. The opening is an absolutely irresistible hook, the track savoring the richness of more than a full minute of pure instrumental exploration before Westendorp even utters a word. The gravel in his tone and the words he spit would be fitting for any group of friends eager to express their anger for an unjust world, in this case denouncing any evidence of a higher power in the true fashion of any budding anti-theist. Pacing between uplifting and gritty, never hesitating to highlight the bright riffs that fill out its body, “Sacrifice Them” seems to flow effortlessly between a cautiously paced instrumental demonstration to a blistering manifestation of Hazzerd’s potential for speed and brutality.

Yet another expression of their brightly burning spunk cascades in the open display of fireworks that kick off third track “Sanctuary for the Mad.” Also manning the drums, Westendorp keeps pace with the relentless onslaught from guitarists Toryin Schadlich and Brendan Malycky. Though this track has the hallmarks of any eager, biting thrash piece, the two guitars build on one another in an impressive feat of thoughtful cooperation, matching one another in speed and energy, yet complimenting one another in a dual blitz that carves rich textures out of an angry chorus and even further delights from tastefully mixed musical interludes. “Sanctuary for the Mad” is also an opportunity for bass player David Sprague to come to the forefront of the mix, the deep notes of his bass giving organic warmth to the cold clash of cymbals and piercing fangs of shrieking guitars. 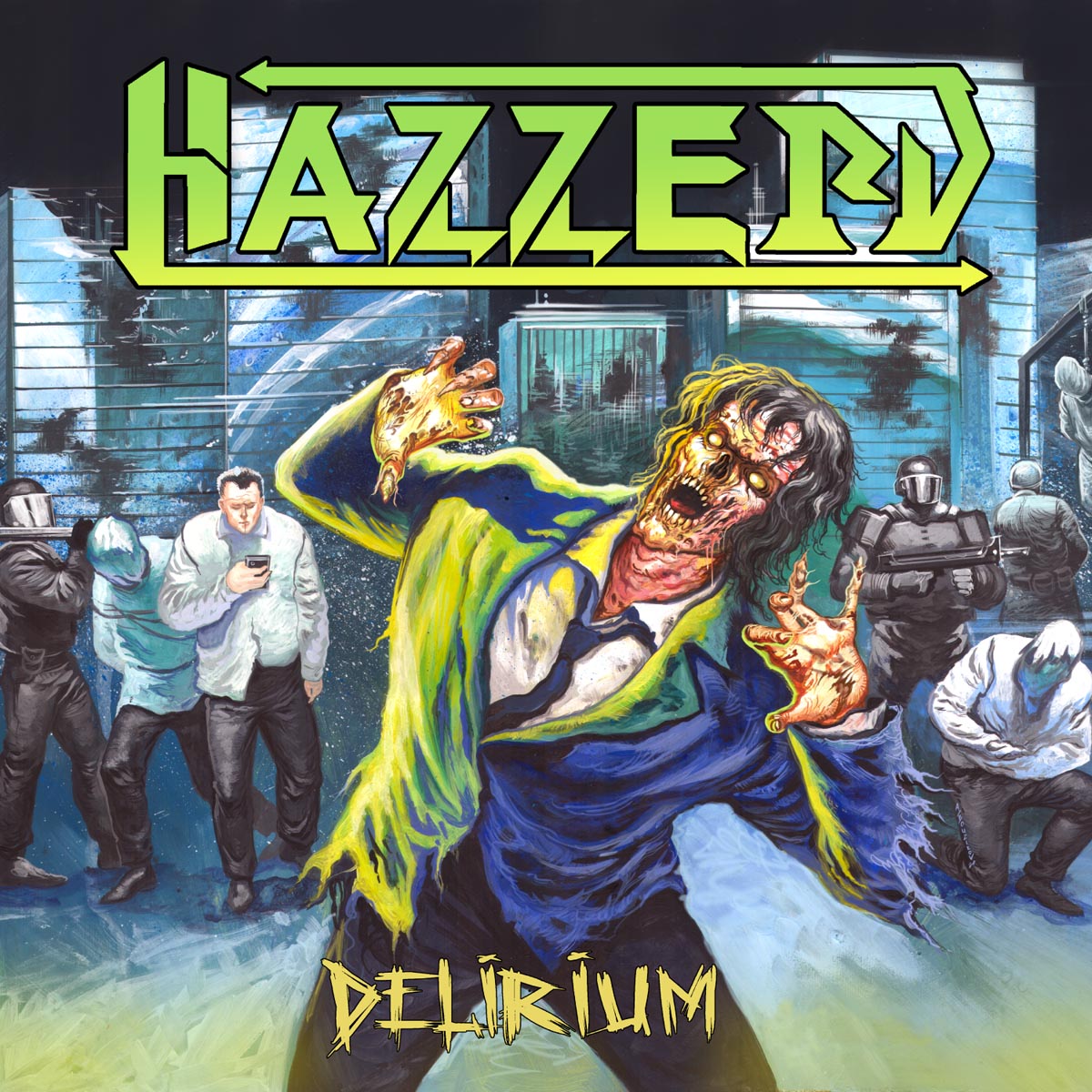 Even in their most aggressive moments, Hazzerd seems incapable of writing a track without a hook so tantalizing that it draws the listener in effortlessly. Despite often leading with nothing but a cavorting guitar in their opening notes, a wide variety of speed and tone make each song a new breath, a new adventure into the minds of incredibly focused songwriters. A somewhat juvenile presentation in lyrics and occasionally self-indulgent showboating is a wave of frigid water apart from the overwhelming thoughtful and driven songwriting that dominates “Delirium” from front to back. But such a bombastic display of joy makes the album all the more endearing, as it professes no shame to the thought that artists should imbue joy into their creation, no matter how it may butt heads with a more refined concept.

On the other side of the coin from this raw, expressive presentation is that of incredibly practiced musicians with a keen eye for songwriting and composition. Fifth track “Call of the Void” is a yawning chasm that incites listeners to jubilation with more than five minutes of pure instrumental bliss. Forgoing speed in favor of an explorative journey through instrumental speeds and styles, Schadlich and Malycky flit effortlessly between momentum and thoughtfulness, lingering across memorable riffs that weave themselves in an impenetrable web of musical prowess. Proving not just their compositional dexterity, but their range as musicians, Hazzerd brings an element of the delightfully unexpected in “Call of the Void,” a breath of fresh air apart from fiery choruses and dazzling solos that seem to be more ordinary feats.

A careful mix and polished production add even more richness to the stunning wealth offered in “Delirium.” Instrumentals are never in competition with one another, Westendorp’s voice clear and polished but never drowning out the sea of guitars that dance in an endless duet. Even the heart of the bass is unforgotten, the deep notes filling out the background in a purely blissful timber. Each musician has made themselves an absolutely essential component to make this album ceaselessly intriguing, and the bright polish allows it to retain its listening value far past it’s first playthrough. Instead of trying to be definitive, Hazzerd has focused on the beauty of pure creation, and in the process have created a work of art that is unforgettable by any measure.

The maturity and vision in the creation of “Delirium” has produced an album that is not just inspired, but is full of unexpected delights at each and every turn. The front-facing character that occasionally comes across as brash and juvenile may be a sharp contrast from the more sophisticated passages that seem to dominate the album’s soul, but the juxtaposition is a demonstration of artists that are unafraid to write their own truth, and perform the music that speaks to them. This exuberance for their art is plain to see in each guitar solo, every passage of thundering drums that rains down speed and fury, and even in the imploring instrumental interludes that bring the guitars to a near funerary drawl. Paying homage to the roots of not just thrash, but pure heavy metal, is the final polish to an album that owns up to its strengths and sees its moments of weakness as just another endearing feature. As refreshing they are engaging, Hazzerd continue to develop and enrich their skills in dazzling style with their stunning sophomore opus “Delirium.”

An exercise of driven technicality and an artistic vision driven by an unabashed joy for creation has developed an album that embodies the best of both thrash and heavy metal. In a melting pot of styles and influences, the juvenile enthusiasm of Hazzerd’s spirit combines effortlessly with skilled songwriting to create an album that is exciting, engaging, and a refreshing taste of genuine exuberance amongst a sea of external pressures to conform.