Though not counted among the so-called Big 4, Exodus is a name that is synonymous with thrash metal, going all the way back to its primordial incarnation circa 1982 when said band was starting to put out demo material with eventual Metallica shredder Kirk Hammett in their ranks. While it is largely stipulated among the old school crowd that original vocalist Paul Baloff will remain the quintessential voice behind said band despite his short tenure, his replacement Steve “Zetro” Souza has definitely solidified his status as the vocalist more often associated with Exodus given his more prolific input and over-the-top delivery. During his absence from the band in question following the release of Tempo Of The Damned, he kept himself busy with a number of projects, including the Bay Area super group Dublin Death Patrol and a short stint with Canadian death thrashers Tenet. Be all this as it may, his crowning venture outside of Exodus would have to be that of Hatriot, a band that counts two of his sons as the rhythm section and boasts a sound fairly similar to Zetro’s original band mates’ of late.

Many came to write this band off as a flash in the pan that couldn’t function without the iconic vocalist that lent his talent to them, as Souza was invited back into the Exodus fold immediately following the release of Dawn Of The New Centurion in 2014 and nearly five years of studio silence followed a band that once boasted that they could put out an LP every year. However, one must not be too quick to dismiss the fact that metal is in the blood, and consequently, can well be transferred from father to son in more ways than one. This becomes evident within the first moments of vocal vileness that comes streaming out of this band’s 3rd studio outing From Days Unto Darkness, as bassist turned front man and Zetro’s son Cody Souza has an uncanny ability to completely emulate his father’s signature snarl. In all seriousness, the author of this review had to check and then recheck the album’s liner notes multiple times for a note that Zetro had come back to do session vocals, that’s how remarkably similar the grunts and barks populating this album sound to what graced the previous two LPs.

Building upon the modernized, blunt force trauma approach to modern thrash that dovetails with recent outings courtesy of the likes of Overkill, Testament and Death Angel, Hatriot has unleashed a true riff-obsessed hay-maker of an album to usher in the closing months of the 2010s, while also taking a few cues from the more epic, long-winded songwriting of Overkill’s 2017 crusher The Grinding Wheel. While the rhythm section that bears the Souza surname makes a hell of a racket and definitely enjoys a thunderous presence throughout this album’s 52 minute duration, it is the guitar work of Kosta Varvatakis and virtuoso Justin Sakogawa that truly make this album a unique and occasionally progressive endeavor. Sparing no expense in the aggression and speed department, this is an album that thrashes with the best of them, yet is also an opus that has a keen sense of creepy aesthetics and atmospheric buildup, often featuring extended acoustic guitar passages that occur with a similar frequency to those iconic clean guitar breaks that were all over Testament’s The New Order. 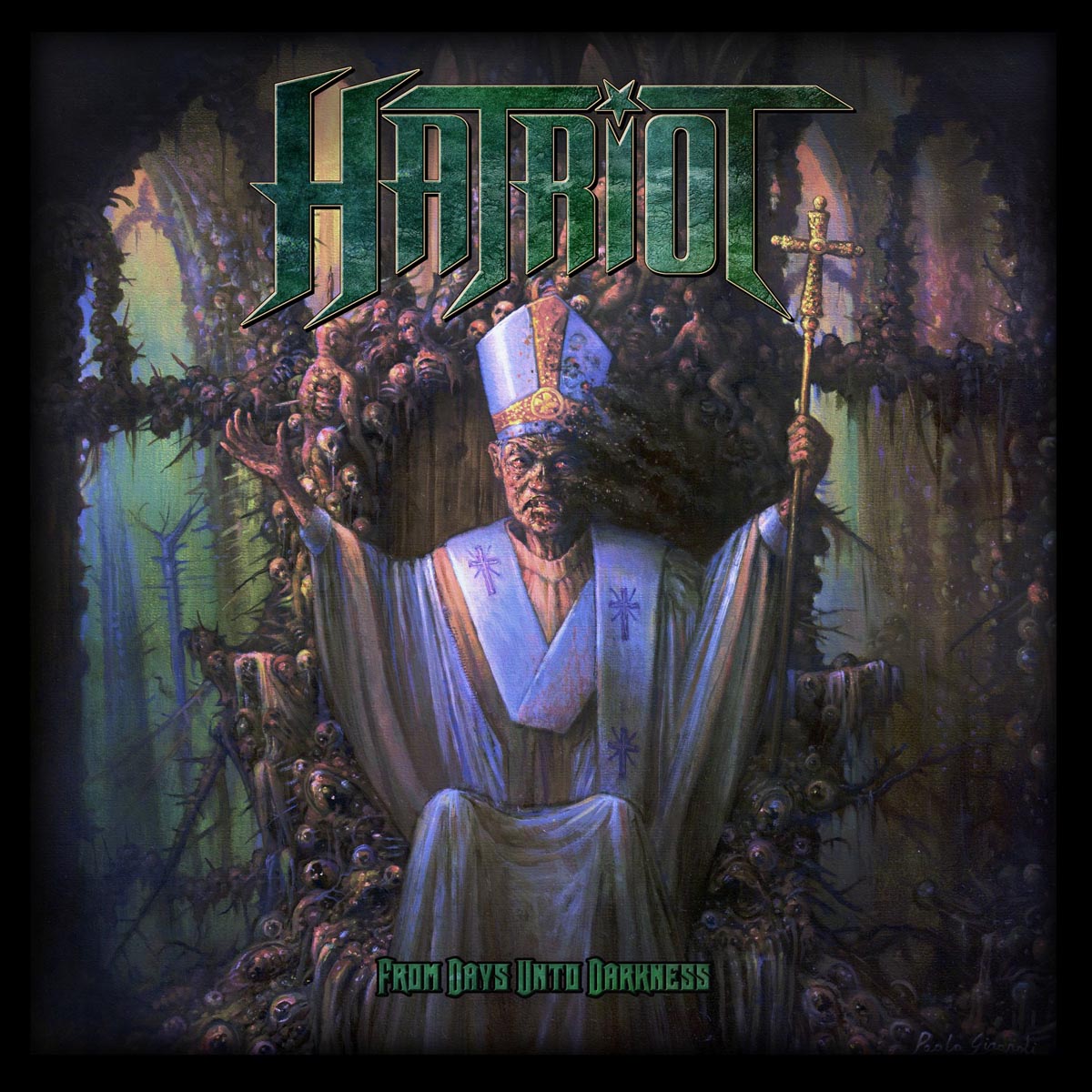 “From Days Unto Darkness” Album Artwork

Putting aside the impressive lead guitar displays that rival Alex Skolnick and Gary Holt and the razor thin line that Cody’s phlegm-drenched shouts and deep grunts walk between thrash and death metal, this is a pure exercise in solid songwriting that rests somewhere between the heavier and slower progressive thrash of the early 90s and the more frenetic variant that preceded it. Whether it be extended mosh-happy punishment such as the seven minute bruiser “Frankenstein Must Be Destroyed”, or his shorter and equally ugly cousins “World, Flesh & Devil” and “Delete”, the faster side of the equation is well represented. Then again, the multifaceted acoustic turned vile opening epic “One Less Hell” and the creepy circus tune turned shred-happy cruiser “Carnival Of Execution” mix things up a bit when not piercing ear drums by the hundred. If there is one album out of the pack that stands above the rest, and solely does so due an unbelievably brilliant lead guitar display to match the crushing rhythms, it’s the tech happy closer of nod to Annihilator “Ethereal Nightmare”.

Relative to the recent output of big names associated with the San Francisco Bay Area, this is a fairly strong outing. The only area where it comes up maybe a tad short is the lyrical department, if only due to the occasional awkward interludes into Tourette’s sounding profanity at a few key points that come off as lame and unnecessary given the already bleak outlook painted by the musical backdrop. Granted, Exodus spent a good portion of the 80s and early 90s being accused of turning into a whiffle thrash outfit due to the increasing degree of silliness being injected into their lyrics, though this comes off more as a strain of unintentionally funny lyrical gaffes rather than an attempt to merge thrash and comedy unsuccessfully. It doesn’t really detract too much from the sheer power of this album as a musical creature, and it goes without saying that a band sporting the moniker Hatriot might be prone to occasionally overdo the first half of said portmanteau

“From Days Unto Darkness” Track-listing:

1. One Less Hell
2. Daze Into Darkness
3. Carnival Of Execution
4. Organic Remains
5. World, Flesh & Devil
6. Frankenstein Must Be Destroyed
7. In The Mind Of The Mad
8. Delete
9. Ethereal Nightmare

Crushing the ear drums of every naysayer in sight, two chips off a prestigious Bay Area block and some other competent thrashers return from a long hiatus, minus an iconic front man, but with an equal degree of raw power