Galactic Cowboys has always been a musical enigma. Hailing from Houston, Texas, the band combined melodic thrash, progressive metal, and Beatlesque harmonies into a genre of its own creation. Blending these considerable musical chops with a quirky sense of humor, the band quickly distinguished itself from anyone else in the world, garnering fans among some of music’s biggest stars. Their first time around, though, they were the right band at exactly the wrong time.

A year after forming, at the dawn of the 1990s, Galactic Cowboys was signed by the David Geffen Company as their next big thing, for an unprecedented advance. Geffen already had the current big thing: Guns n’ Roses. However, sensing the end of that juggernaut (correctly), Geffen held off on unleashing the Galactic Cowboys until sales of Use Your Illusion set had tapered off, and groomed the Cowboys for mega stardom. Quickly becoming regular fixtures on MTV, including two videos in rotation, everything was going according to plan. Nevertheless, culturally, generation X was coming of age, and with it, a completely new musical culture. Sensing this change, David Geffen sought out an equivalent to the Cowboys in this new genre, to be the vanguard there. That band was Nirvana.

Geffen released Nevermind alongside the Cowboy’s debut release, and let fate determine which way music would develop in the 1990s. From its place at the cutting edge of a nationwide cultural transformation, grunge ended the reign of metal, and — before they had even really started — Galactic Cowboys. Undaunted, Galactic Cowboys released a string of highly acclaimed albums. Their most notable fan-base became other musicians — an exclusive club that included other 1990s musical misanthropes such as Jellyfish, King’s X, and Kevin Gilbert. Reflecting both the musicality and diversity of the band, Galactic Cowboys Cowboys toured primarily with two music legends, Anthrax and Dream Theater, reflecting their versatility.

Galactic Cowboys vanished prematurely in 2000, probably disappearing from the face of the Earth while working on an ultra-secret mission. Now, 17 years later, they are back. Ben C Huggins – the band’s lead singer – affirms: “We said we’d only come back if the world needed us. When Mascot sent out the distress call we knew it was time to return. Get ready world. Here come Galactic Cowboys!” The reformed Cowboys consist of all the original members: lead vocalist Ben C Huggins, drummer/vocalist Alan Doss, guitarist/vocalist Dane Sonnier, and vocalist/bassist Monty Colvin. They descended upon Doss’ studio in Houston, Texas, through early 2016 to write and record what would eventually become their new album: Long Way Back To The Moon. 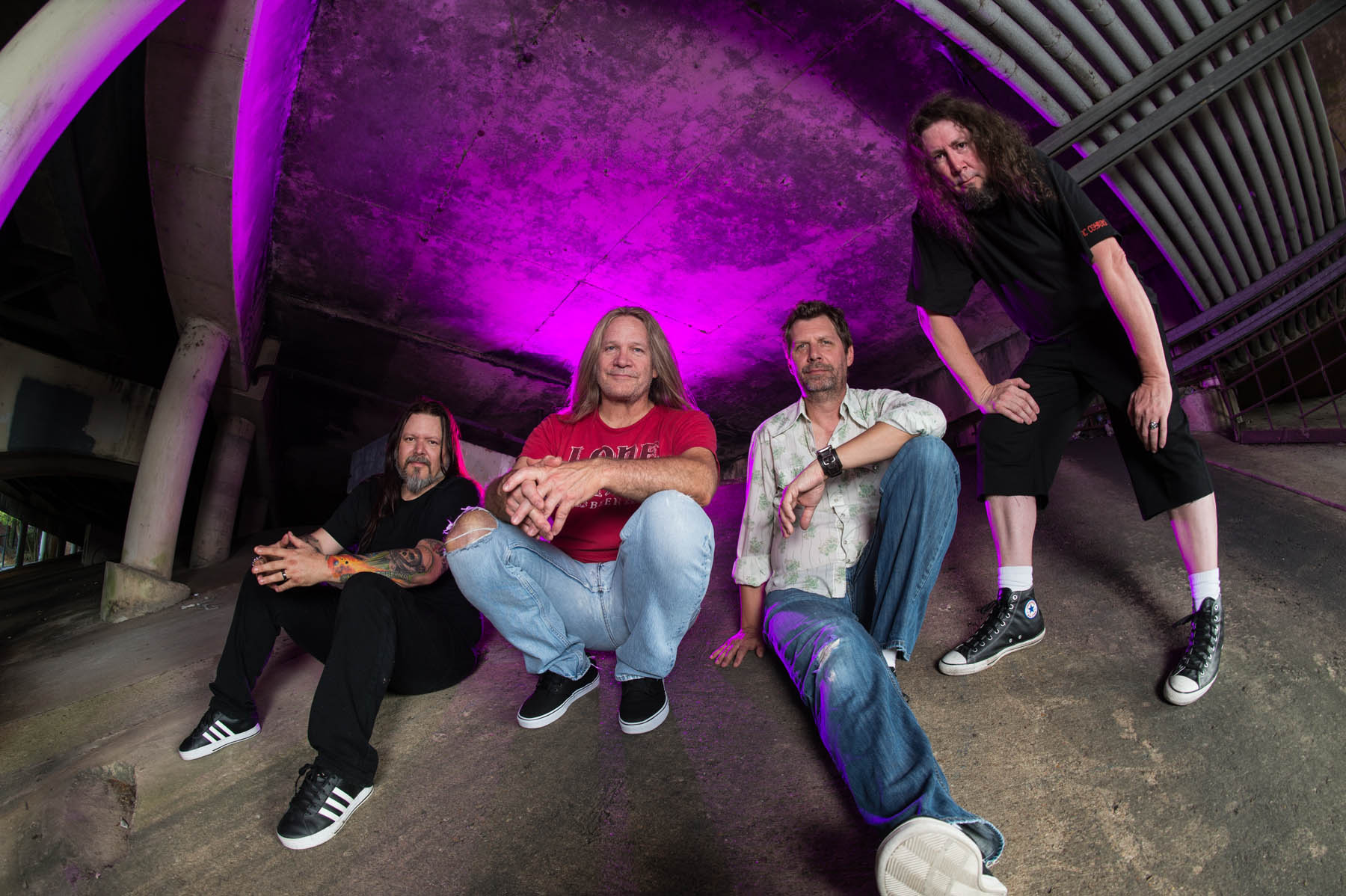 The Galactic Cowboys are back! – Photo by Stephanie Cabral

The album’s sound is alternately heavy, whimsical, charging, and crunching, combining inescapable atmosphere with the drive of a band on a mission. Old fans will feel at home, but hard rock fans who have never heard Galactic Cowboys before will also be instantly hooked. As with all Galactic Cowboys albums, the songs are emotional in topic, and often including a large dose of ironic humor. Each song is performed, sung, and written with intense passion.

The opener “In The Clouds”, turns out to be the first Galactic Cowboys song ever written. Penned in 1989 by Doss and Colvin after the demise of their previous outfit, The Awful Truth, the song explores leaving the banal confines of this world behind and ascending to a higher plane of existence. Curiously enough, it’s also the song Huggins sang to earn his spot in the band: a melodic mid-tempo with thrash infused grooves, huge dreamy melodies and a rip-roaring bass. “Internal Masquerade”, the album’s first single, examines the turmoil endemic to the human experience and the difficulties in keeping self-generated darkness at bay, bringing back those probing guitar melodies and the upbeat grooves that make your foot tap in joy as the joint melodic vocals harmonies of Huggins and Colvin expose the innermost lies we all believe. “Blood in my Eyes” is next, featuring the album’s heavier moment via a progressing staccato riff that echoes like the unborn child of Faith No More and Pantera.

Timely topics continue with “Next Joke”: from kid’s sports in which everyone gets a trophy, to Disney telling kids to wish upon a star and all their dreams will come true, our unrealistic expectations have set us all up for failure. Brain-crushing thrash scattered with plodding Black Sabbath-esque riffing that just as well might have inspired the great Seattle bands that over-shadowed them originally, punctuated and brightened in surprisingly happy, Beatlesque vocal harmonies. The fun continues with the tongue-in-cheek song “Zombies”:  an ironic study on finding love on the last day of human existence, blended with social commentary regarding modern society’s obsession with its electronic screens. A fast paced, punk driven tune sporting slamming’ bass, on-point riffage and steady drumming, it is the typical mosh-pit track I’d love to see performed live.

“Drama” features another staccato rhythm wrapped with groovy layered vocals: heavy, harmonious, and sardonically amusing: a perfect way to describe this band. After the surprisingly melodic and slower “Amisarewas” with marching guitars and a cool belted out chorus, the band shows a more brutal face with the confrontational “Hate Me”, which bears the imprint of the old Suicidal Tendencies and easily wins the spot for the heaviest and fastest song on the record. Fast forward to the end of the album we find two bonus tracks: “Believing the Hype” and “Say Goodbye to Utopia“, both containing well-constructed tempo changes and breaks, harkening back to the Cowboys’ iconic songs, yet infused with a contemporary and groovy rock sound, showcasing the band’s technical ability and talent; somewhat experimental while retaining their trademark style.

Long Way back to the Moon bursts with the freshness of the first Galactic Cowboys album, sharing the explosion of energy and creativity that only results from almost 20 years of pent-up musical passion and inspiration finally being released. It’s not ground-breaking by any means, and I don’t think the band meant to evolve or bring anything different to the table. Straightforward metal with prog-rock overtones is pretty much the blueprint this album was built upon, and quite honestly, the result is simply scorching. A graceful and well-constructed musical effort, which brings a criminally underrated – and sorely missed – band back into today’s musical landscape, Long Way back to the Moon is a long-overdue comeback: once the fans were longing and will be thankful for.

“Long Way Back To The Moon” track-listing: