A grand excursion into metaphysical horror.

In this increasingly digital world, it might seen a downgrade to bring back an old classic in what is generally regarded as a niche medium, but given that this is a subset of metal, it’s actually not a terribly peculiar turn of events. Said corresponding community is among the most avid supporters of analog media, even for sub-genres within metal’s respective umbrella that are all but exclusively underground. Indeed, the dream-like sound and quasi-psychedelic character that defines Esoteric, one of the pioneering acts of the funeral doom metal style, is arguably the perfect candidate for a vinyl reissue. Combined with the fact that their seminal third studio offering “Metamorphogenesis” is their only studio LP not to have been released in this form, this is quite an auspicious turn of events for anyone who likes their death/doom at a gravely slow pace and with a dense enough atmospheric character that one’s ears could practically swim in it.

If there would be a way to sum up precisely what this band’s sound is, it would be along the lines of a series of bleak musical poetry that is so mysterious and exceedingly broad in character that it reveals this to be one of the more aptly named musical outfits in the business. Exaggeration paints over every droning segment of this album’s three epic length songs, be it the punishingly slow pace of things, the neurotic shifts between consonant and dissonant sound aesthetics, and the inhuman vocalizations of front man Greg Chandler. Though heavily obscured by the surrounding instrumentation, his neurotic mixture of extremely deep barks and groans alongside a shrieking barrage of screams walks the dual path of a demonized narrator and a bereaved funeral attendee wailing to the distant cosmos. This resulting and gargantuan wall of sound is, nevertheless, rivaled by the vivid character of the accompanying lyrics, which detail dark and cynical ponderings in so artful a fashion that they could all but pass for a high level intellectual discourse. 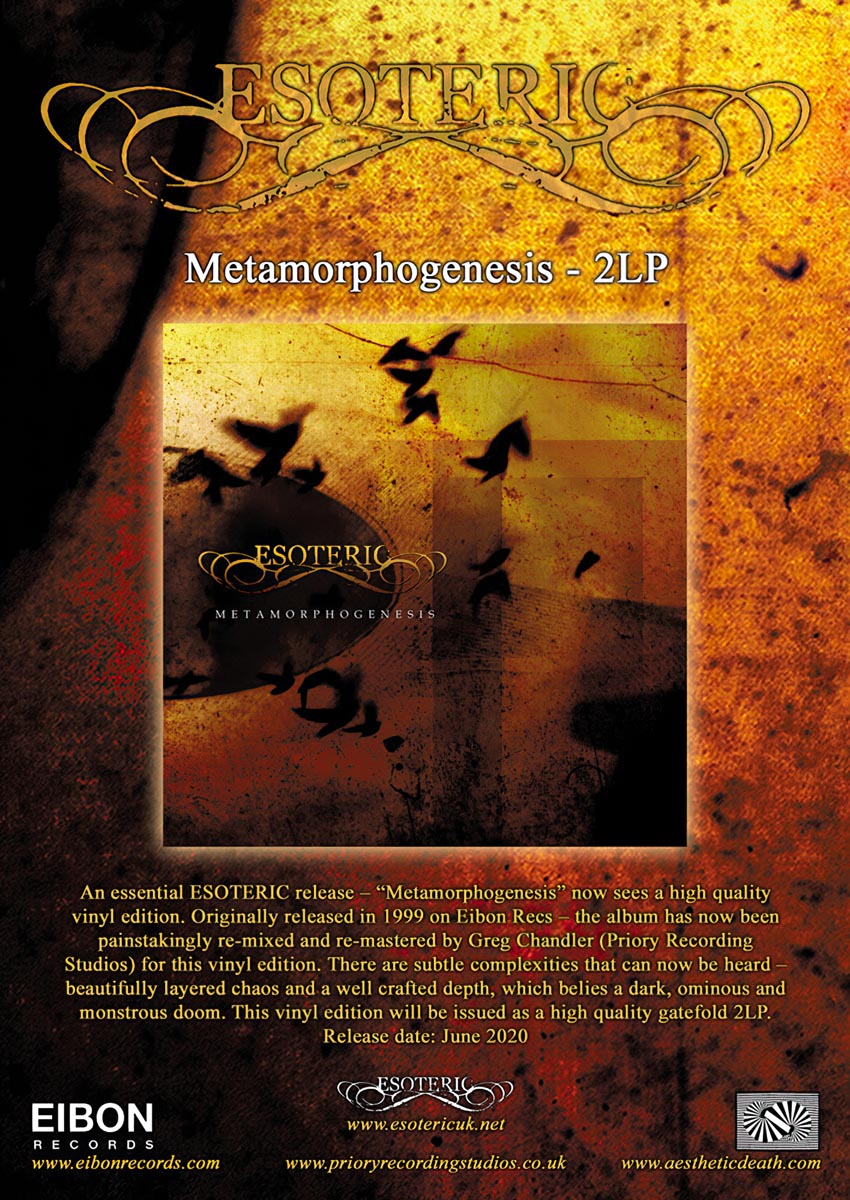 Despite the extremely complex character of this album, it is arguably the most accessible offering under the Esoteric moniker. Occasionally viewed as an EP given its fairly short length compared to most of their LPs which flirt with being 2 hours in length, it has a sense of compactness and organization that makes it a bit more in line with the standard tenants of death/doom. Likewise, the character of the guitar work has one foot firmly placed in the older death metal character that dominated early 90s death/doom offerings, including fairly expansive guitar solo segments interwoven with all of the slowly progressing drones and spacey ambiences. The mixture of somewhat lighter psychedelic doom elements, particularly during the cleaner segments also provide a sense of cadence within what feels like a purely stream of consciousness affair musically, allowing form moments of a pristine sense of wonder to occasionally chime in amongst the bleak excursions into oblivion.

An album of this sort doesn’t really consist of songs in the traditional sense, but rather a smaller collection of massive, slow-progressing sonic tapestries that amount to a colossal structure that seems to flow as one continuous, 44 minute long composition. Interestingly enough, the most dynamic and disturbing of the trio of extended journeys through the swamps of fatalism is opener “Dissident”, which progresses in the most gradual of fashions from a droning dirge to a somewhat up tempo eruption of woe. Though comparatively shorter and somewhat more subdued, “The Secret Of The Secret” compensates for a perpetual procession at one pace with a few melancholy quiet interludes by utilizing a highly agitated guitar presentation that could almost be considered a 15 minute guitar solo. The closer “Psychotropic Transgression” ends things on an even slower and more depressive note, being no less free flowing and jarring, but being a bit more restrained, as if a dying man replacing his raging resistance with an almost stoic acceptance. 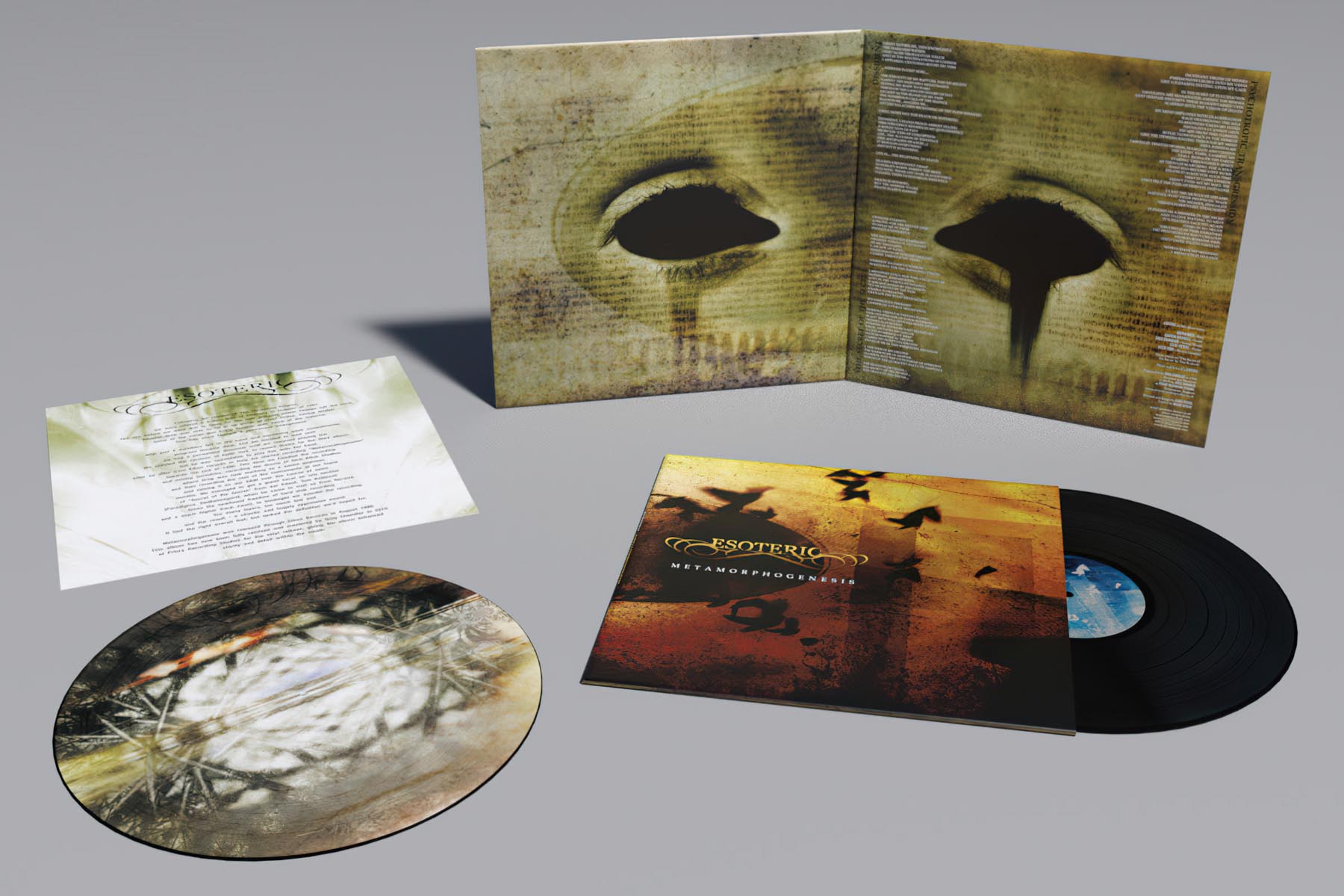 Opinions in funeral doom circles vary a bit regarding whether this shorter slab of woeful greatness or Evoken’s 2001 classic “Quietus” stands as the strongest example of the style, but this one definitely serves as the more accessible of the two for those that are only occasional consumers of the art form. Even within the more extreme fringes of doom metal, this mode of expression is more of an acquired taste and despite a couple decades of propagation will likely prove to remain a fringe player in metal circles. Nevertheless, if there is one album that a newcomer should choose to become familiarized with the funeral doom aesthetic, “Metamorphogensis” is the one to hear. The 2019 re-master that is the basis for this upcoming vinyl collectible comes with a greater degree of clarify and punch, but does not rob the original of its mystique to even the slightest degree. Whether one prefers to contemplate the emptiness beyond via digital or analog means, this album’s status as a cult classic is without question.

After more than two decades, one of funeral doom’s pioneering acts manages to give their most consequential studio offering a vinyl release, recounting a time where auditory brutality was delivered via a slow, wailing and somewhat psychedelic medium