Thrashing brutality will never go out of fashion.

The thrash metal revival that has been ongoing for nearly 20 years has seen its share of peaks and valleys, though it is doubtful that any of the latter will compare to the sad state of affairs that was the majority of the 1990s, at least insofar as the collective scene is concerned. Be this as it may, there was a fairly common sentiment in the media that the scene was in a state of stagnation in the early 2010s and complaints were being launched that the style’s fixation with comedy and retro-80s themes was getting a bit tiresome. Suffice it to say, the coinciding speculation that the sub-genre was about to die a second death was quickly quelled by the beastly fury that was Texas thrash/crossover titans Power Trip, setting the state for a wide array of heavier and more serious bands to claim the aforementioned decade for the thrashing masses. It goes without saying that the tragic passing of said band’s charismatic front man Riley Gale took the wind out of everyone’s sails, but with the time of mourning now passed, the pastures are looking green for the thrashing masses once again.

Enter the Richmond, Virginia-based heavy duty thrashers with a side-order of crossover Enforced and with them a sound that could almost pass for the brilliant brutality that was the stock and trade of their aforementioned forerunners. Though their 2021 powerhouse of a studio LP “Kill Grid” is their second studio offering, the preceding 2019 LP “At The Walls” functioned as a compilation of past demo recordings with a couple of new songs, so technically speaking this 41 minute mosh-fest could be seen as a debut of sorts. Drawing inspiration from the seminal extreme thrashing character of mid-80s Slayer and the chunky, grooving niche first established by Exhorder in the early 90s, this is an album that places its emphasis on raw, unfettered aggression, but also sets aside some time for some occasional moments of technical flair and a more controlled execution. Most of the songs tend to be moderate in scope, with the band’s hardcore sensibilities centering upon the mid-ranged grunts and shouts of front man Knox Colby, while the rest of the arrangement functions like a well oiled thrashing machine. 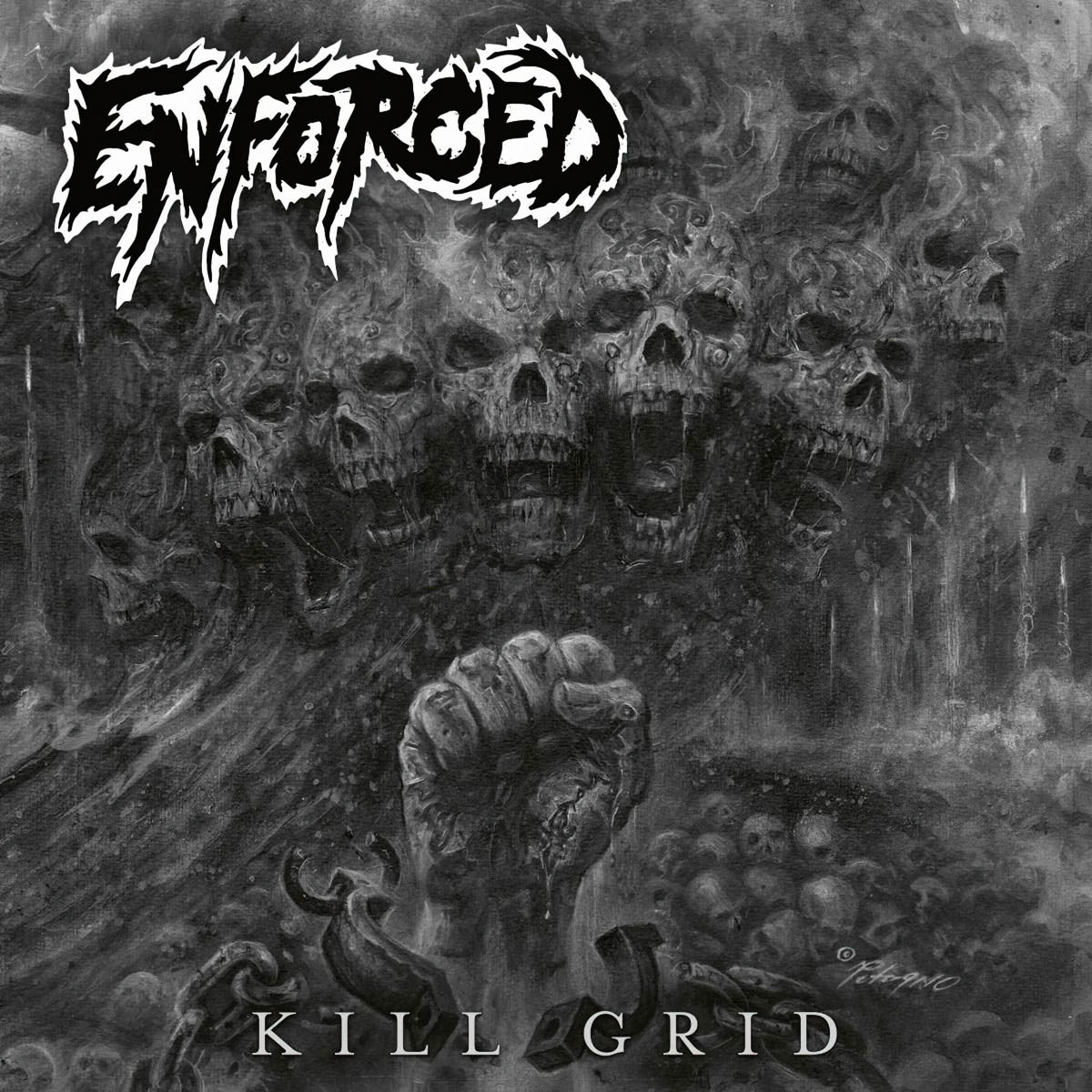 One of the benefits of the hindsight enjoyed by today’s thrash revivalist outfits is that some interesting revisions upon an established formula come into play, and that’s precisely how the majority of these songs work. The opening crusher “The Doctrine” is arguably among the more textbook emulations of classic Slayer that one might come across nowadays when looking at the blurring riff work and flashy solo exchanges between Zach Monahan and Will Wagstaff, yet the meaty, anvil to the skull guitar tone and production like something out of early 90s Demolition Hammer combined with Colby’s deeper growl gives it a very different flavor. Likewise, the otherwise full on recap of what made “Reign In Blood” a seminal classic and influence upon the then developing death metal scene finds itself in more expansive songwriting territory, sounding closer to something that could have been on “Hell Awaits” yet with the sonic body and dimensions of “Seasons In The Abyss”. Truth be told, the only song that occurs on here that gets maybe a tad close to being an overt retread of the exact formula under consideration is the shorter chaotic cruiser “Beneath Me”.

While thrash metal and particularly its crossover-tinged incarnation are known principally for blinding speed and crushing heaviness, there is definitely some needed variation at play here to keep things from getting overly formulaic. Perhaps the most obvious deviation from the almost always fast approach going on here is the 7 minute title anthem “Kill Grid”, which definitely takes some heavy cues from the slower and more atmospheric side of the speed metal coin and merges it with some early 90s groove sensibilities that does an even greater job of catering to Colby’s highly percussive vocal style. It still employs plenty of signature tremolo riffs and whammy bar-happy lead guitar noodling in the classic King and Hanneman tradition, but does so much more sparingly. Another auspicious incident of stylistic deviation is the closing anthem “Trespasser”, which spends more time in mid-tempo land and has more of a mainline Bay Area character to the riff work that reminds a bit more of Vio-Lence’s “Eternal Nightmare”, which ironically ends up lingering even when things go into overdrive and the shred-happy solo exchanges enter the fray.

It’s up in the air as to whether Century Media Records has managed to stumble upon the very band that will pick up the torch for Power Trip and carry it on through the rest of the decade, but that same fiery spirit of pummeling the sound barrier and occasionally breaking it is on display throughout the lion’s share of this album. It has a bit more of an overt Slayer influence going on in the guitar work and the formula here is a bit more prone towards launching into overdrive and using the groovy elements as more of an introductory device or resting point, but it’s tough not to hear the same commitment to raunchy heaviness in the band’s collective sound and particularly in how closely Knox Colby’s vocal work resembles that of Riley Gale. There are few certainties in this crazy world, but a betting man would do well to wager that thrash metal isn’t going away any time soon, and hopefully this powerful offering will simply be the precursor to a prolific run of neck-destroying mayhem as the current decade continues to unfold.

Like a runaway freight train tearing through the streets of Richmond, a new fold of modern thrashers have emerged with a substantial sophomore slaying session to see the sub-genre into the 2020s