David Wallimann is not a household name. Most of you reading this review have never heard of him before, hence some initial story is due. David is a musician, guitar educator, product demonstrator and entrepreneur, but he’s mostly known for his melodic intricate guitar drive composition. He also have a real passion for teaching and hosting weekly videos on his very popular YouTube channel.

David was born and raised in South France. In 2004 he moved to the United States to pursue a musical career. During that time Randy George and Gene Crout were putting together the second compilation CD of Christian Progressive Rock, with Neal Morse’s help. David heard about that project and sent Randy one track, and that started a friendship between the two of them. David’s track “Waiting for the Sun to Rise” was featured in the second compilation (widely known as “CPR2”) alongside songs from Neal Morse, Glass Hammer, Bill Hubauer, Simon Apple and others.  Shortly after his move David joined internationally acclaimed symphonic progressive rock band Glass Hammer with whom he recorded their concept album “Culture of Ascent” in 2007. He also performed on their two live DVDs “Live at Belmont” and “Live at the Tivoli”. In 2013 he was invited by Dweezil Zappa to teach at his Dweezilla music camp in upstate New York. Dweezil praised David’s involvement: “David Wallimann’s tracks will help you become more musical”. It was during that time that he wrote and produced the “40 Year Journey” a musical composition over 8 minutes long featuring some of his favorite guitar players of all time, which you can listen to in the link at the end of this review. Some of the guitar players were Derryl Gabel, Tom Quayle, Dweezil Zappa, Oz Noy, Chris Buono and James Santiago, with Randy George handling the bass, Tobe London on drums and Vincent Denis and Fred Schendel (Glass Hammer) on keys.

In 2010, David released his first CD entitled Deep inside the Mind, a heavily Christian-themed album with spoken lyrics. Later on that year he moved to Colorado, in order to focus on his personal musical career and goals. Then he started revisiting music he had written long before moving to the US and began working on what would become his second solo album Evolving Seeds of Glory. He launched a Kickstarter campaign in January of 2015, to involve the fans in a musical adventure he described as a two parts instrumental musical journey, and successfully raised more than the 100% of the funds needed to finalize the record. 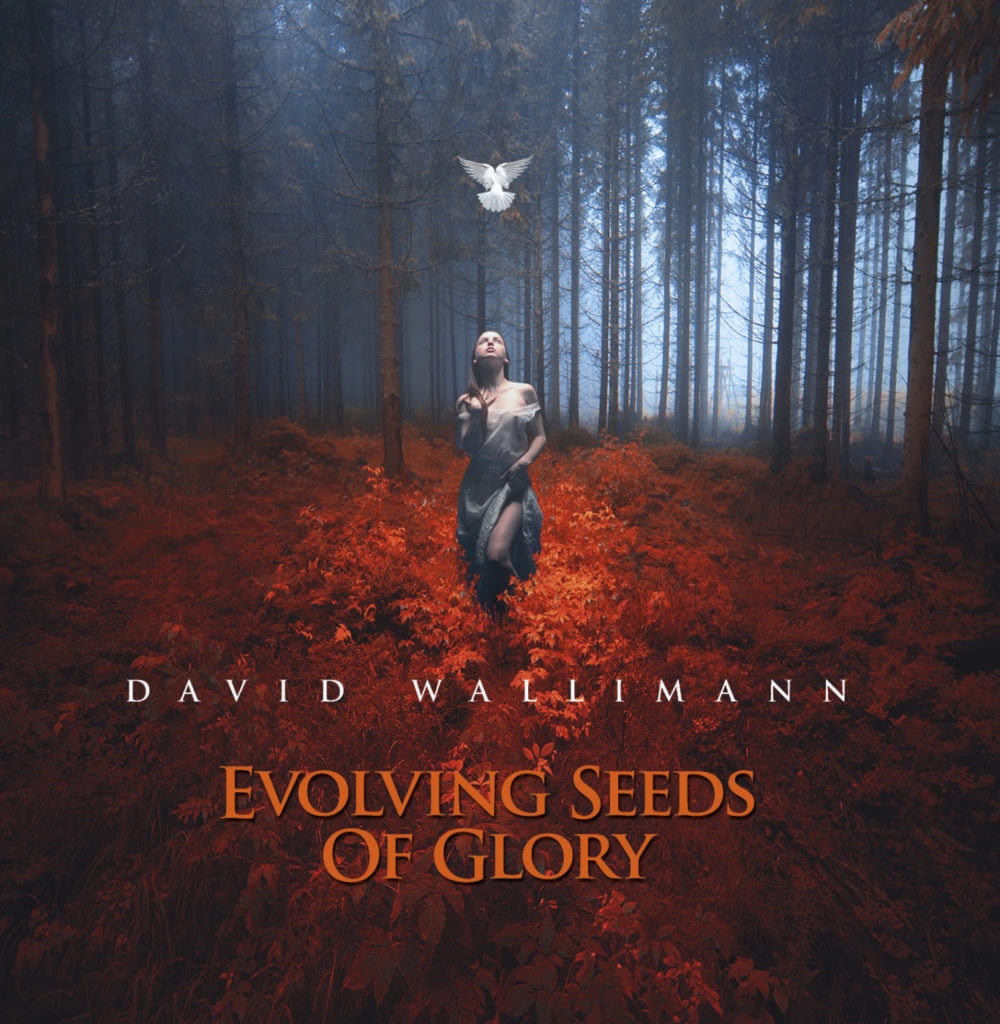 Evolving Seeds of Glory is an introspective look at David’s personal relationship with our Creator through a myriad of soundscapes and musical notes. Each song has an accompanying few lines of verse on the album artwork to set up a spiritual, but non-specific framework for the listener. But don’t get mistaken: this a powerful, dramatic, heavy and convoluted record. Every song has something else to delight us with, from the melodic and choir-like intro of “Overture” or its hypnotic Eastern melody interlude oozing sensibility and brilliance, to the astounding technical chops so impeccably integrated in “Time”, the awesome melodies, emotional acuity, and amazing guitar tones in “Change” or the intentional fusion flavor mixed with harmonica passages in “How Can it Be”. David’s sense of melody and his ability to shift from a delightful solo to a groovy riff and yet again to a keyboard and string laden passage are simply impressive. The music is at various times melodious and moving, elevated and majestic, and mostly magnificently skilled; and Wallimann’s playing throughout the CD is brilliant, as he weaves his highly developed guitar abilities over an immersive pleasant-sounding panorama. I could simply say this is best instrumental symphonic-progressive rock album I’ve listened to since… well I can’t really remember.

David surrounded himself with a stellar rhythm section and their contributions in the sound of the album are very worth to mention. All bass parts were recorded by Randy George (Randy George Project, Neal Morse Band, Ajalon) and drums were recorded by Nick D’Virgilio (Spock’s Beard, Cirque du Soleil, Big Big Train). Nick D’Virgilio drumming is… well, Nick’s drumming. He handled every rhythm pattern with marvelous precision, putting some unexpected and intricate fills here and there, and making every single drumbeat to sound exactly in the perfect place, shining without overindulging himself. Randy George on the other hand offered a tremendous wild ride with his bass parts, creating stunning, melodic runs and putting his omnipresent stamp throughout the record, proving how versatile and inventive he can be. Other partners in crime were Glass Hammer’s Fred Schendel who did a synth solo on “I Turn to You,” and Neal Morse co-conspirator Eric Gillette (our review of his own great prog-album, The Great Unknown can be read here) who played a formidable and head-whirling 7-string guitar solo on the ending track “Saviour”.

I am a really big fan of instrumental albums, I always enjoy the heck out of them, and Evolving Seed of Glory is gonna be spinning very often in my CD player for the future to come. This album is a collection of inspirational, focused and organic songs, thoughtfully crafted and beautifully executed. It’s plenty of energy, melodies and nuances, and can be enjoyed regardless of your spiritual standpoint. Give Evolving Seed of Glory a chance and you will thank me later.