When the topic of the good old days is brought up, the question that naturally arises is “which good old days”? Even when considering the relatively young and extreme offshoot of heavy metal that is death metal, the rich 30 years plus history in view lends itself to a number of different eras that could be seen as old fashioned compared to its current manifestations. For the New York based progressive death metal outfit Contrarian, the lion’s share of their sound is clearly oriented towards the experimental days of genre-fusion that were all the rage in the early to mid-1990s, spearheaded by the genre’s arguable founder Death, and further expanded by Atheist and Cynic. It’s a fitting path for this now 5 year old band to venture down, as its de facto leader guitarist Jim Tasikas and bassist Ed Paulsen trace their careers back to the mid-90s outfit Manic, and its late-90s incarnation Delirium Endeavor, delving into similar sonic landscapes and philosophical lyrical pursuits as the aforementioned pioneering acts.

Though this Rochester-born collective of virtuosos tends to touch upon real world topics with their words, they present a style that is best described as otherworldly, a niche that is pretty well hinted at by their extravagant and usually Sci-Fi/Fantasy-based album arts. The visual of a dark cloaked sorcerer standing before a great dragon in the midst of a cosmic skyline that adorns their third studio LP Their Worm Never Dies is an altogether fitting one when considering how massively complex and vivid the music itself proves to be. Though its chapters be few in number and its overall duration is moderate even by the standards of the mid-90s stylistic template being employed, these are not songs in the popular sense of the word, but more ambitious compositions that displays an intricate sense of tonality and a freeness of structure. All the same, there is a method to this technical madness that goes beyond simply being a 37-minute demonstration of each player’s chops, and culminates in a musical journey through existential discourse worthy of deep contemplation.

Death metal itself tends to be an impact-based art form where, like its older cousin thrash metal, the force of the riff work and rhythm-section battery carries the day. Nevertheless, the atmospheric nuances and tonal ambiguity common to jazz music has a strong say in much of the material that came out of the early progressive death era, and it is quite well represented throughout this album. This is actually the one aspect of Contrarian’s sound where the echoes of Chuck Schuldiner’s spirit are either less obvious or foregone for something more along the lines of Cynic’s brand of stylistic fusion. The serene clean guitar intro of “The Petition” and the more phasing drone arpeggios the mostly ballad-oriented title song “Their Worm Never Dies” is a bit thinner than the acoustic interludes of Symbolic or The Sound Of Perseverance, and also avoids any spacey keyboard additives indicative of Human. However, there is a consistent discipleship to Death’s overall sound littered throughout even these moments, particularly when the harmonized leads of the latter song paint over the arrangement. 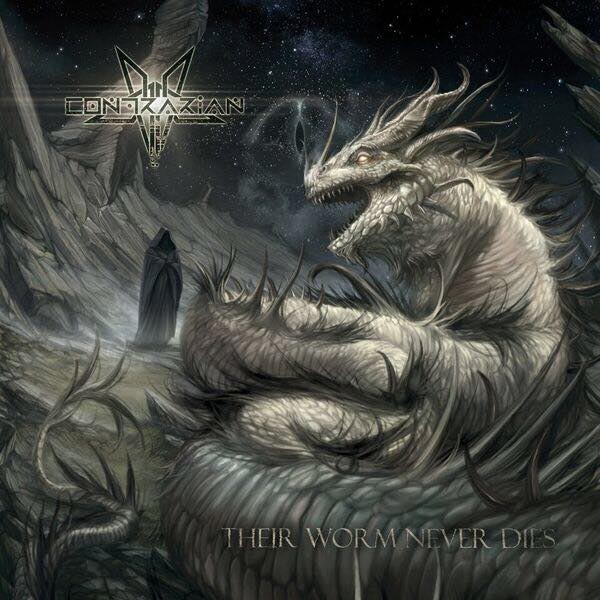 Barring the exceptions of the quieter moments and a somewhat more elaborate formula indicative of present day technical death metal influences at certain points, this is an album largely born out of a trail blazed by Schuldiner between ’93 and ’98. The riff work that Tasikas brings to the barrage of speed and rhythmic twists that is “Vaskania (The Evil Eye)”, to speak nothing of Paulsen’s Steve DiGorgio inspired bass gymnastics (which continually fight the riffs for prominence throughout the album), presents a highly impressive and dense experience worthy of a 10 minute work at just over half the time. One would naturally be remiss to fail in mentioning George Kollias’ spectacular drum work, namely the freewheeling jazzy display put on during “Among The Mislead”, made doubly impressive by providing a lead vocal display reminiscent of Mike Browning’s work with Nocturnus while doing so. All of these elements, alongside some 6-string contributions by Brian Mason of Sulaco, come to a climactic head on this album’s closing epic “Whomsoever Worships The Whiteworm”, a brilliant stylistically multifaceted homage to arguably Schuldiner’s magnum opus “Perennial Quest”.

While not a complete throwback to the classic period of forward-looking death metal that rose to prominence in the second half of the 1990s in all respects, this album is definitely born out of a very clear sense of revivalism that touches most of what is heard. Even the production quality and fairly-thin character of the guitar sound hints at a sound that was more common 20 years ago than it is now, foregoing the heavily layered brutality that most have come to associate with the style thanks to the legions of impact-based outfits following the ways of Cannibal Corpse. It’s more of an exercise in subtlety, or at least to the degree that the death metal style is capable of doing so, and will probably hold a degree of appeal among fans of newer bands like Decrepit Birth and Revocation, though ultimately the biggest target audience is the nostalgic metal fans who have been gorging themselves on the early Schuldiner-worship of Gruesome and are ready for someone to emulate what came after Human. Once one gets beyond the mechanics of mortality, questions of why and to what end will naturally emerge, and that’s ultimately where Contrarian opts to take things.

1. Vaskania (The Evil Eye)
2. Exorcism
3. My Curse
4. The Petition
5. Among The Misled
6. Their Worm Never Dies
7. Whomsoever Worships the Whiteworm

Old is new and new is old where the question of mid-90s death metal progression is concerned, as the great teachers that were Death and Cynic originally taught, so too do their immediate disciples continue to practice