Burning Witches are a retro-sounding metal band comprising of 5 leather-clad ladies of astonishing appearance, who seem commit to carry the torch of the power, speed and traditional metal to the next generation. Founded in 2015, debuted with self-titled debut album released in 2017, and the band didn’t only receive the attention of the traditional metal audience but also from one of the scene heavy-weights Nuclear Blast Records, which quickly signed the band.

“Hexenhammer” represents the sophomore offering by the all-female metal outfit fronted by Seraina Telli, who has been hailed by some in the promotional game as a female version of Judas Priest’s Rob Halford. While the merits of such a claim are rather reaching, it must be said that Telli displays a lot of diversity in both range and timbre over the course of the record. From sparse death growls to frequent high-pitched screams like in the opening of “Open Your Eyes,” Telli covers a lot of ground and occasionally even evokes familiar tonal shades of Doro, as well as the late Grace Slick (Jefferson Starship) and Rhett Forrester (Riot), and even the mid 80s/early 90s CCM hitmaker Margaret Becker (a rather ironic comparison given the occultic marketing and theatrics of the group’s album cover and appearance). There’s certainly a “Painkiller” aspect to some of her highest-pitched shrieks, and like most metal acts, the vocals can be an asset or liability, depending on one’s musical preferences. Overall, Burning Witches stock on trade balances foundations of classic and power-metal with some bits of more modern thrash-metal whipped in, for a complete full-speed ahead true-metal combination, one that reminds of the Gods of the genre.

Lyrically, the record mines a historical period of medieval times when the extermination of witches was legalized. The book MALLEUS MALEFICARUM (a.k.a. THE HAMMER OF THE WITCHES, in German: “Hexenhammer”) that legitimated the witch hunting in 1486 is the album’s epicenter. It is about oppression, violence against the week and manipulation of fact – any of these topics more up-to-date than ever. Periodic wails and screams of pain such as on “Dungeon of Infamy,” as well as what can only be described as creepy flesh eating sounds at the beginning of “Maneater,” all provide an eerie sonicstage to the release. Instrumentally speaking, the record features some swaggering, chunky riffs that are hefty and somewhat predictable but consistent with the old school vibe that accompanies their sound. With the exception of “Don’t Cry My Tears,” there’s really no soft side to Burning Witches. Guitar slingers Romana Kalkuhl and Sonia Nusselder deliver a smattering of speedy licks and solos throughout “Hexenhammer” that are quickly accessible and sure to play out well in a live setting and inspire rows of headbanging at outdoor festivals. The thundering rhythmic precision of bassist Jeanine Grob and drummer Lala Frischknecht pushes the vocals and guitars more up front in the mix, further defining the band’s sound. 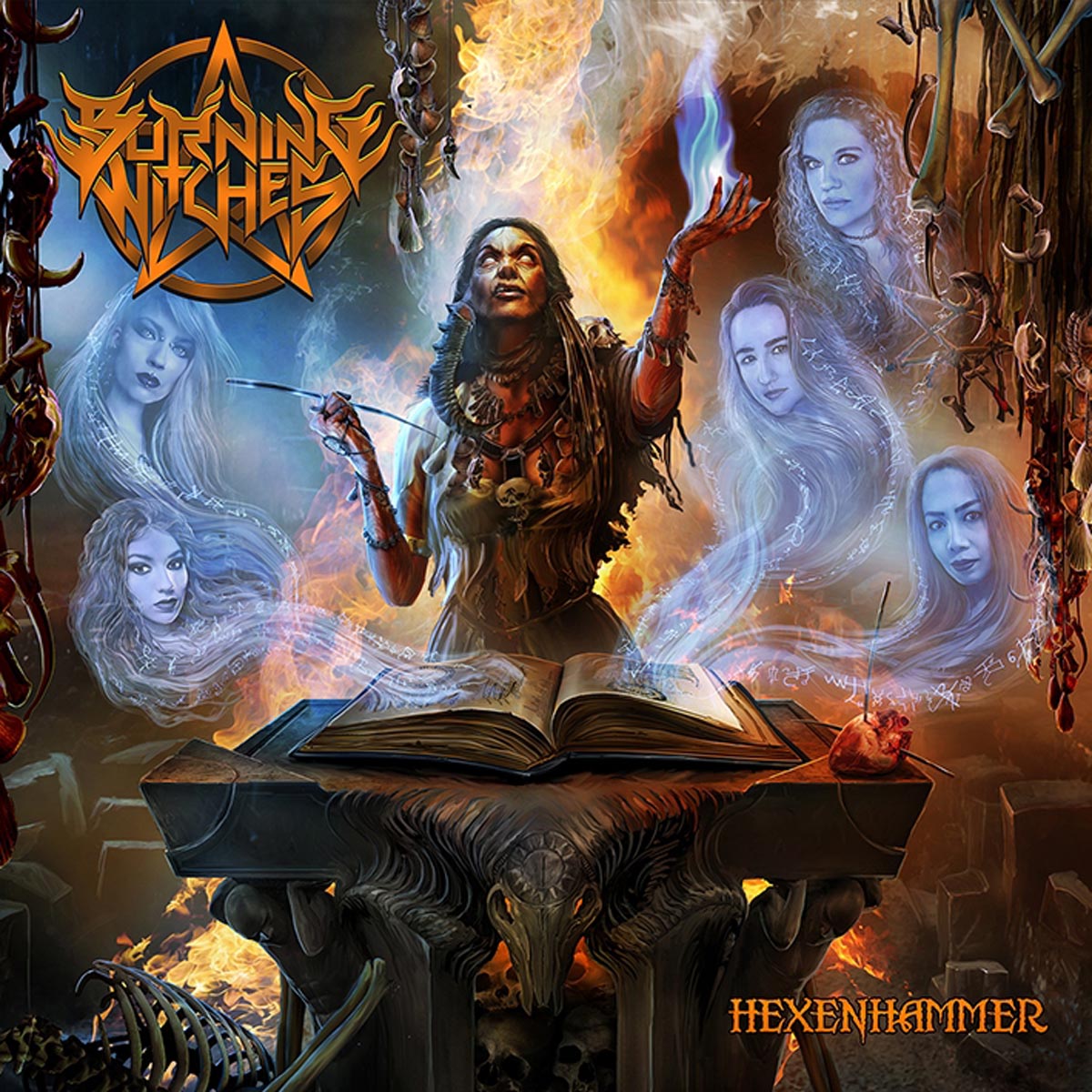 The album treads familiar paths, but for those with a penchant for old school metal of the heavy and power variety, this swirling cauldron of powerful riffs may cast an irresistible spell on the unsuspecting. Even before the listener reaches the final track, a competent and faithful cover of “Holy Diver,” Burning Witches have already firmly established its affinity for the Dio sound and vibe alongside the obvious Judas Priest aesthetic. Hexenhammer vibrates with muscular vitality and a commanding, in your face, chugging attitude. Unabashedly wearing their influences on their sleeves, these Swiss gals have energy in spades and will give many established heavy-metal outfits a run for their money.

“Hexenhammer” is an unashamed true-to-roots metal record, courtesy of this Swiss, all-female band that steers clear of soft touches and strives instead for accessible riffs, space for solos and high pitched screams to keep the listener’s ear on edge. The band is a bit of a newcomer on the scene with a good chance of building a loyal following if they can roll out these tunes with the same power and intensity in a live format that was captured in the studio on their sophomore release.