Even necrosis can take on a traditional character.

When it comes to good old fashioned death metal in all its gory goodness, the name Asphyx should ring a bell for anyone interested in those early bands that expanded the style beyond its extreme thrashing roots. As with just about every band that came raging out of the late 80s explosion of the style, their demos had a fairly typical character to them when compared against the early entries heard in the continental United States and specifically the late 80s Florida scene, but even then their proverbial course would see occasional deviations that would set them apart from the early entries of Death and Morbid Angel. This divergence into what would become known as death/doom was naturally a gradual one, and the resulting early offerings that ushered in the 90s out of this outfit would generally lack the melancholy Gothic stylings that would become commonplace in Sweden and Britain courtesy of the likes of Anathema and Katatonia, though occasionally the melodic scheme behind the sludgy brutality of this band’s more traditional sound would lean it that direction.

This little history lesson is relevant primarily because with the release of “Necroceros”, this outfit’s 10th studio LP, a very deliberate and highly successful attempt at recapturing the character of the aforementioned early 90s sound has been realized. To those with only a basic familiarity with the implied sound, it doesn’t really walk the line between the dank slowness of doom metal and the raging aggression of death metal, but rather vacillates back and forth between the two. At times, the tempo is kicked up to the point that it more closely resembles the more up tempo traditionalism with occasional side-dabbling in doom metal heard out of Autopsy’s “Severed Survival,” while at others it approaches the slower and swampier realm in a manner that parallels the trudging ferocity of Incantation and the warlike march of Bolt Thrower. And even on those occasions where territory that could be considered somewhat Gothic is explored, the agonized and mid-ranged screams of former Pestilence front man Martin Van Drunen imbue the sound with more of an earlier death metal flavor.

Indeed, far from being a consistent excursion into dreary, long-winded dirges of the macabre, Asphyx opts for a varied path that incorporates a healthy degree of pounding thrashers and mid-paced crushers that speak to a variant of death/doom more obsessed with mobs of zombies rather than the fatalistic romanticism that is often associated with the style. The opening monster thrasher “The Sole Cure Is Death” is an excellent portrayal of how the rapidly shifting tempos and raging dissonance of Death’s “Leprosy” and Benediction’s “Subconscious Terror” can work within a danker context, ditto the comical ode to Hollywood vanity “Botox Implosion”. Meanwhile, the thudding mystique of colossal stomper “Molten Black Earth” and it’s shorter yet equally fierce doppelganger “Knights Templar Stand” full capture the harrowing militarism of Bolt Thrower’s “War Master” with some hints of the death ‘n’ roll cruising of mid-90s Entombed. However, it is when this pummeling militarism is drawn about a bit longer and adorned with moments of melancholic consonance as on the epic, down tempo forays “Three Years Of Famine” and the closer/title offering “Necroceros” that Asphyx’s primordial exhibition truly hits its zenith. 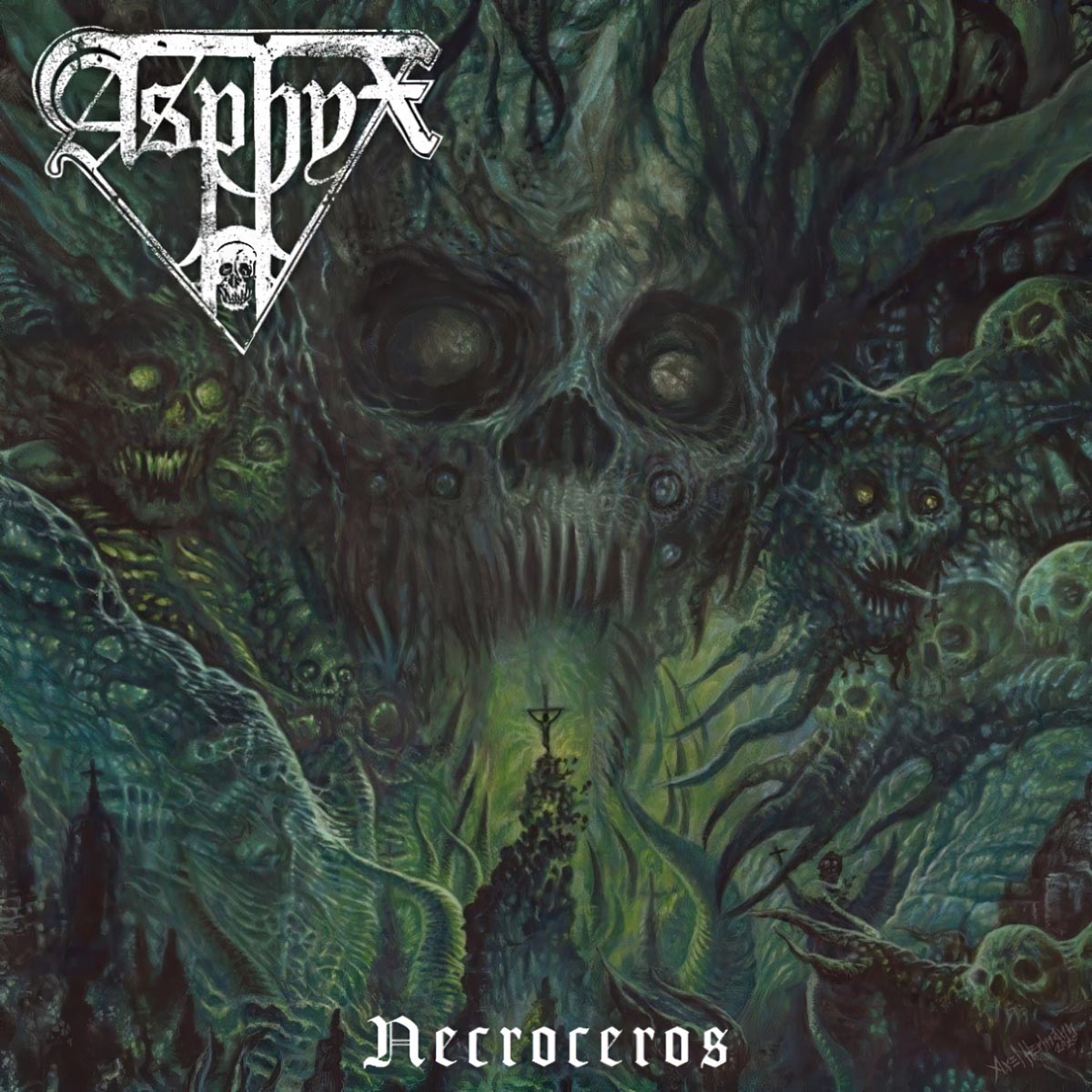 Though it might seem a tad bizarre to attribute a description like typical to a work this ferocious, in the grand scheme of this band’s more than 30 years of existence, this is what one would come to expect from the Asphyx play book, and very much in a positive way. It reminisces upon a time when death metal was a bit freer in how it approached varying its formula, all the while sticking close to a clearly defined sound that could not be mistaken for other extreme expressions of the metal genre. It doesn’t quite hit the same qualitative heights as the colossal 1992 sophomore outing “Last One On Earth,” nor the 2000 return to powerful form “On The Wings Of Inferno,” but it’s definitely on the higher end of this band’s cumulative output and offers a solid selection of anthems that rival the dense murkiness of the older New York death metal sound, but are just a smidge closer to the vintage one that preceded it in Florida and the one that came up with it over in Sweden. Those who enjoy a bit of Grave to go with their Hooded Menace and Bolt Thrower will definitely want to have a go at these fine, traditionally rooted fits of auditory necrosis.

Dutch death/doom pioneers, born in the days of the style’s primordial beginnings, return for a tenth episode in the studio, bringing the brutality with a muddied edge and varying pace as only the early 90s could deliver.