After several decades of being put at the forefront of the European power metal movement by the success of Stratovarius, there have been zero signs of Finland’s signature take on it slowing down despite a number of sizable ebbs in the style’s commercial viability since the 1990s. One of the more intriguing acts to have adopted the more somber aesthetic as heard from the likes of Sonata Arctica with a symphonic twist comparable to Nightwish is that of Arion, an outfit that has been balancing the triumphant character of the sub-genre with their more fatalistic lyrical pursuits with impressive results since the early 2010s. Though seen as coming from out of nowhere, the involvement of ex-Sonata Arctica guitarist Jani Liimatainen in the songwriting of their 2014 debut LP “Last Of Us” serves to explain this band’s fairly rapid ascent in the power metal world, and it’s been a consistent road of quality output ever since. Nipping right on the heels of their highly engaging 2018 sophomore effort “Life Is Not Beautiful,” “Vultures Die Alone” presents yet another expansion and improvement upon a winning formula.

Generally a picture of pristine symphonic sounds and a dramatic operatic vocalist at the helm with a metallic drop is the one that this style gets tagged with, but Arion has been among a crop of younger bands that have been bucking this trend of late. The musical presentation is of a much more guitar-oriented character, channeling a sound more in keeping with the older heavy metal-infused riffing approach associated to outfits such as Burning Point and early Firewind, and the lead guitar work of Iivo Kaipainen is of a much more virtuosic and shred-happy character that dovetails more so with Gus G than the window-dressing, token metal element that Emppu Vuorinen has brought to Nightwish of late. But even more so than the masterful guitar work and the equally consequential keyboard display out of Arttu Vauhkonen is the impact made by front man Lassi Vaaranen, whose grittier vocal approach brings more of a Marco Hietala flavor into the mix and definitely gives things more of an edge.

Yet in spite of this highly elaborate combination of sonic elements being in play, the approach that Arion tends to take in constructing their albums consists of a fairly compact and formulaic approach to songwriting, and this latest studio offering is the most streamlined of the bunch. Mid-paced bangers with more of a radio-friendly demeanor such as “I’m Here To Save You” and “I Don’t Fear You” have a straightforward presentation, but get the job done with a brilliant combination of highly infectious melodic hooks and a meaty, almost power thrashing guitar assault. Similarly catchy and compact offerings such as the opening cruiser “Out Of My Life” and the title anthem “A Vulture Dies Alone” go even harder on the quasi-thrashing heaviness and could almost pass for something Arch Enemy might conjure up, save for Lassi’s vocals. Even the heavily bombastic nod to Nightwish’s symphonic brand of bluster “Bloodline” pummels with the ferocity of a high octane thrasher and features a brilliant guest vocal slot by Battle Beast front woman Noora Louhimo. 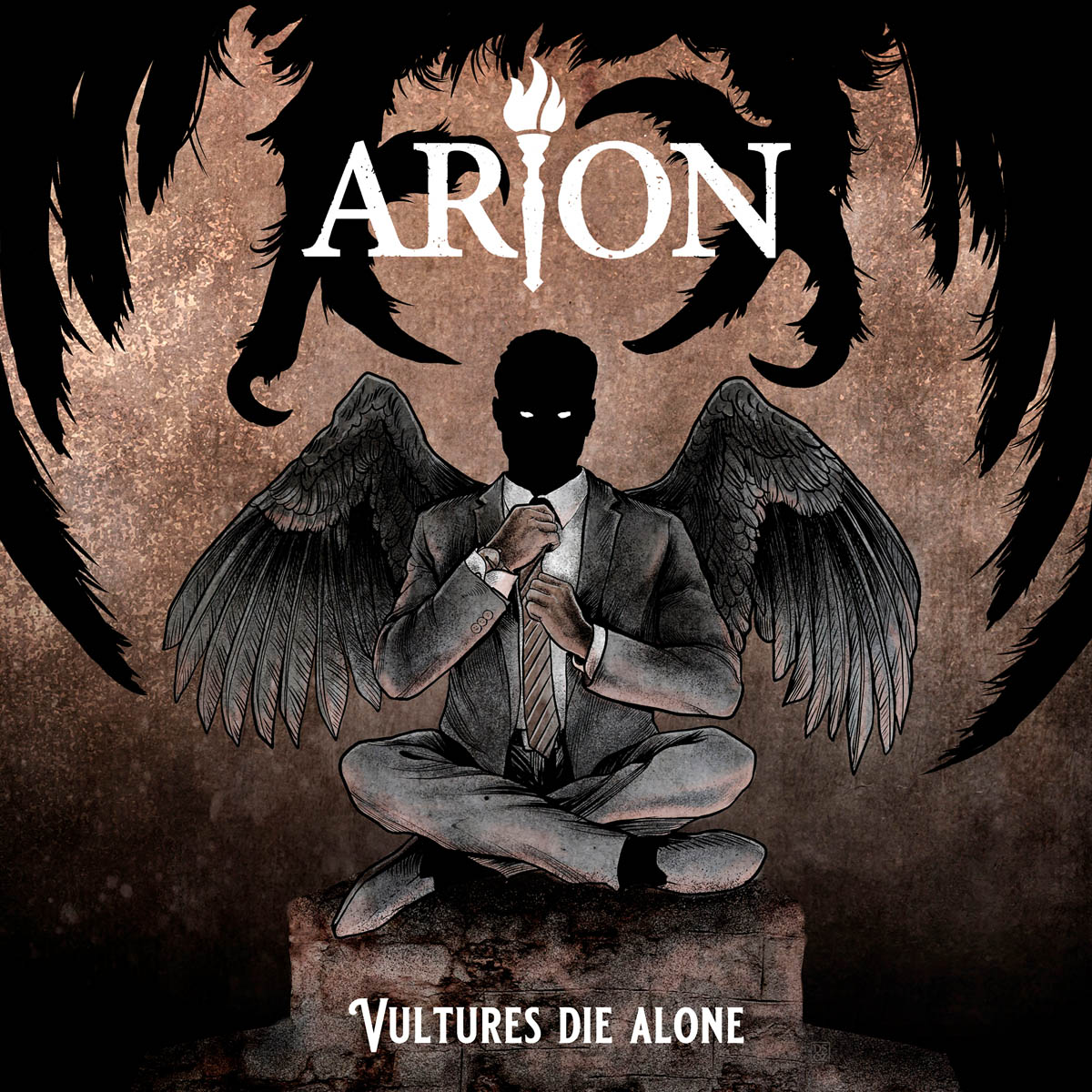 The exceptions to the rule of up tempo, punchy anthems in sub-4 minute packages prove to be no slouches in the heaviness department, though they do present a more nuanced counterpoint to the overtly thrashing character of the aforementioned songs. The more down-tempo and ballad-like “In The Name Of Love” wants for nothing in the intensity department, though it’s accomplished more so in the heartfelt vocal performance put on by Lassi and members of the rock band Cyan Kicks that are brought on as guests, alongside a truly riveting guitar solo. “I Love To Be Your Enemy” proves more of a deceptive entry that begins on an almost ambient note and then launches into a blistering foray of groove-thrashing mayhem that merges the band’s signature symphonic flavor with a riff set that could pass for Lamb Of God. But the absolute zenith of the more nuanced fair on here is the epic instrumental romp “Where The Ocean Greets The Sky”, which features a brilliant guitar display out of Kaipainen that could pass for Malmsteen and a series of serene passages out of the end credits of some grand Hollywood production.

While this is a band that is still relatively new to the scene, at least compared to all of the mainstays of the millennial power metal revolution that paved the way for the current context, it’s pretty safe to say that this stands as their magnum opus thus far. It’s a bit more straightforward of an album relative to its predecessors, but the combination of captivating symphonic material on here and the high impact character of its metallic battery make it an exemplary album in the style, if not album of the year material. It goes without saying that fans of classic Finnish power metal as exemplified in Stratovarius, Nightwish, Dreamtale and older Sonata Acrtica will find a great album here, but it wouldn’t be much of a stretch to see those who normally go for the darker variant on the same template as represented in such melodeath acts as Children Of Bodom, Eternal Tears Of Sorrow and Dark Tranquillity finding this appealing as well. The world may prove woeful and replete with vultures, but an album like this definitely puts a triumphant spin on this unfortunate state of affairs.

One of Finland’s rising star outfits delivers the 3rd installment of a mighty symphonic metal hat-trick, walking a fine line between consonant smoothness and the jagged edge of metallic aggression with stellar results.