Link has grown cynical these days.

Though likely a complete coincidence, one can’t help but notice the striking similarity in appearance that the lone protagonist depicted on the cover of Finland’s latest symphonic power outfit Arion’s sophomore effort with the famed hero of one of Nintendo’s most popular fantasy-based RPG/adventure franchises. To boot, the very album title Life Is Not Beautiful betrays a sense of cynicism in our beloved green-clad adventurer (or at least that’s how it looks when the light from his lantern hits his garments), as if he’s spent a bit too much time in The Dark World fighting Ganondorf’s minions or he finally heard about Roberto Benigni’s 1997 critically acclaimed flick and was chuckled at the irony. However one may wish to speculate over the deeper meaning behind an album art that is very well drawn, the marriage of dark fatalism and a heroic struggle is a fitting theme for an album such as this.

As one of the younger acts to hail from the metal-friendly city of Helsinki, the influences adorning their craft cannot help but be blatant, coming off as a well-balanced combination of every major melodic act to come out of Finland in the past two decades. One of the more immediate sources of inspiration is clearly Nightwish, as between the constant film score oriented thunder that surrounds this storm of sound and the often synth-dominated themes that permeate the more metallic moments, this could easily pass for a spinoff of Once minus the vocalist at the helm. Alongside some obligatory power metal bluster and speed that points to a fair degree of similarities to Sonata Arctica, Celesty and Burning Point, vocalist Lassi Vaaranen has a more gritty character to his soaring tenor range that moves things even further away from the close proximity that their Swedish counterparts Dynazty shares with Nightwish of late.

Though very much a cinematically geared listening experience, this album does tend to go a bit heavier on the metal side of the coin than a lot of other recent outings of this style in Europe. Following a very serene musical dance of droning orchestral and piano sounds and a melancholy acoustic guitar line, the riff set that kicks off “No One Stands In My Way” comes off as more of a punchy, almost metalcore-like take on things that cuts through the symphonic bombast a bit more sharply and almost hits with the same intensity as one of the more melodeath oriented acts hailing from Finland. This equality of emphasis on guitar work proves to be a breath of fresh air and caters well to the more technical 6-string majesty that also adorns Beyond The Black’s music, as this song along with a few of the other more heavy-hitting numbers like “The Last Sacrifice” and “Life Is Not Beautiful” complement the heavy riffing and rawness with a set of head-cutting solos that could rival Michael Amott on his best day. 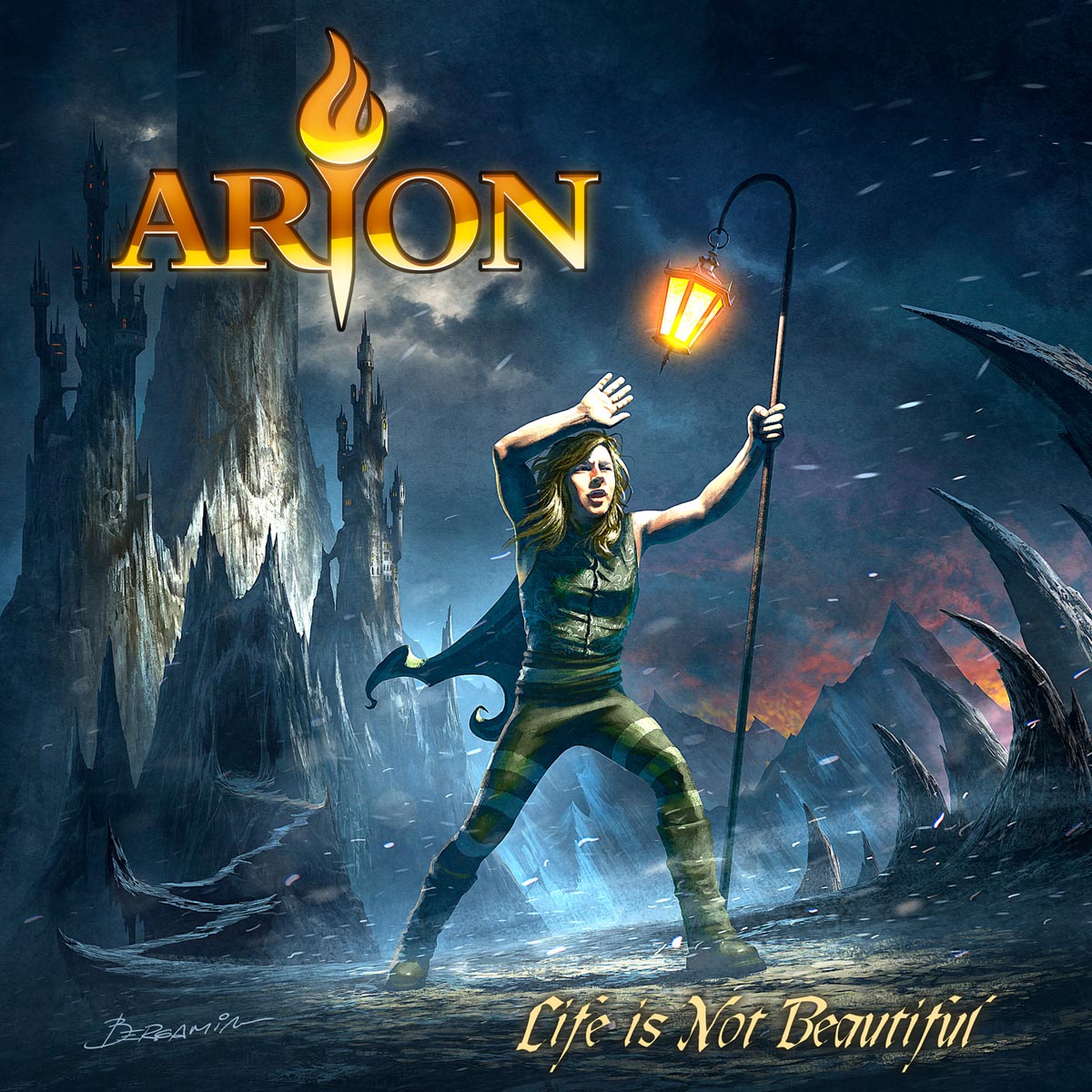 “Life Is Not Beautiful” Album Artwork

The aforementioned crushers naturally embody the tip of the iceberg for anyone seeking aggression, but interestingly enough Arion is not wholly averse to moving in more of a catchy, Stratovarius-oriented direction. While “At The Break Of Dawn” doesn’t skip up on the speed and power, the key draw is the guest vocal slot of Amaranthe and one-time live Nightwish vocalist Elize Ryd, resulting in a highly charming yet all too infectious duet fit for metal radio. A similarly hook-driven anthem with a dose of wild drumming occurs a bit later in “Unforgivable”, which often reminds a bit of “Hunting High And Low” between the bursts of speed. About the only place where this band trips up a little is they go a tad heavy on the balladry with two piano driven odes to a more serene sadness in “Through Your Falling Tears” and “Last One Falls”, as if it were necessary to kill off Zelda twice to bring on Link’s sense of hopelessness.

This is very much an album that caters openly to its target audience, and has a very Finnish and otherwise broadly Scandinavian character to it. Insofar as its contemporaries go, it compares the closest to that of Dynazty’s latest offering Firesign, outclassing it slightly in terms of raw power when things are pushed to the limit, but coming a bit behind it in terms of overall consistency. Far be it for the author of this review to try igniting another rivalry between two neighboring nations with a rich power metal tradition, but these two albums could all but be competing as suitors for the affections of Amaranthe and Nightwish as if they were one maiden, with this one having the advantage of getting a member of the former in on the project. It’s a boon for anyone enthralled with the current symphonic craze and could also cater a bit to those who enjoy the more aggressive sound heard from the likes of Eternal Tears Of Sorrow and Children Of Bodom.

“Life Is Not Beautiful” Track-Listing:

Trudging through the hazy labyrinth of The Dark World, our beloved hero stands undaunted yet cynical as winds of familiar symphonic blasts and riff happy metallic gusts blow against his face