On the surface, they exude the arctic confidence and brutal grace of the most practiced melodic death metal bands: one might be inclined to believe they hail from the cold clutches of Scandinavia. But by the time the banjo has wrapped its hands around your throat, it’s too late to run: gunshots sound behind a cascade of guitars and sonic chaos descends in a whirlwind of pandemonium straight from the American south. Before the opening track has even reached its midpoint, it’s impossible to resist falling headfirst into the cacophonous clutches of Aether Realm’s latest album, “Redneck Vikings From Hell.” An eclectic hodge-podge of genres that span from flamenco to death metal and back around to a touching ballad, “Redneck Vikings From Hell” has no shortages of stylistic surprises hidden within its eleven tracks. This anarchistic approach to songwriting is one that flourishes in the hands of these energetic North Carolinians, and has the capacity to stun listeners who haven’t braced themselves for a hurricane of bluegrass and brutality.

“Tarot” was Aether Realm’s proving ground, an album which put an almost blinding spotlight on stunning musicianship, technical complexity, and an artistic vision that made its way across a strong, unified concept. But there are few structural traces from “Tarot” in “Redneck Vikings From Hell,” aside from a few melodic motifs resurfacing in “Lean Into the Wind.” Where “Tarot” was a bold step in establishing Aether Realm as an original and capable melodic death metal band, “Redneck Vikings From Hell” is a no-holds-barred whirlwind that teeters on the edge of avant-garde for all of its odd directions and sky-high ambition. Perhaps the most notable change of all lies in the hands of vocalist Vincent “Jake” Jones, who has injected lengthy verses utilizing clean vocals alongside his unforgettable screams. This vocal versatility gives the band even more dimensions to work with as they refine their craft, including the infectiously melodic and pop-sweet single “Goodbye” that includes Jones’ clean vocals alongside rich harmonizations. The absolute confidence with which Jones has introduced this new vocal style meshes seamlessly with the band’s new direction, and shows off a stunning voice which deserves center-stage whether he is screaming or not.

If it weren’t obvious from the twangy heartstrings and Carolina pride bleeding through title track “Redneck Vikings From Hell,” this album is one filled with as many serious musical endeavors as it is with gratuitous moments born from Aether Realm’s artistic passion and love for their fans. At just over two minutes long, “She’s Back” is a lyrical and musical callback to the hit from Aether Realm’s debut album, the ever-popular song “Swampwitch.” Another tip of the hat to their fans is “TMHC,” declaring their victorious ascent to fame with the rabid strength of underdogs finally breaking onto the scene. From the shotgun blasts peppering the opening track to the in-jokes that longtime fans will appreciate above anyone else, the sharp pivot to the instrumental epic closing track “Craft and the Creator” or the emotional depths of “Guardian” are enough to give listeners whiplash. Along with consistency in vocal performance, guitarists Heinrich Arnold and Donny Burbage reliably deliver a dual assault on strings, peppering each song with compelling riffs that demonstrate their complexity and artistic growth. 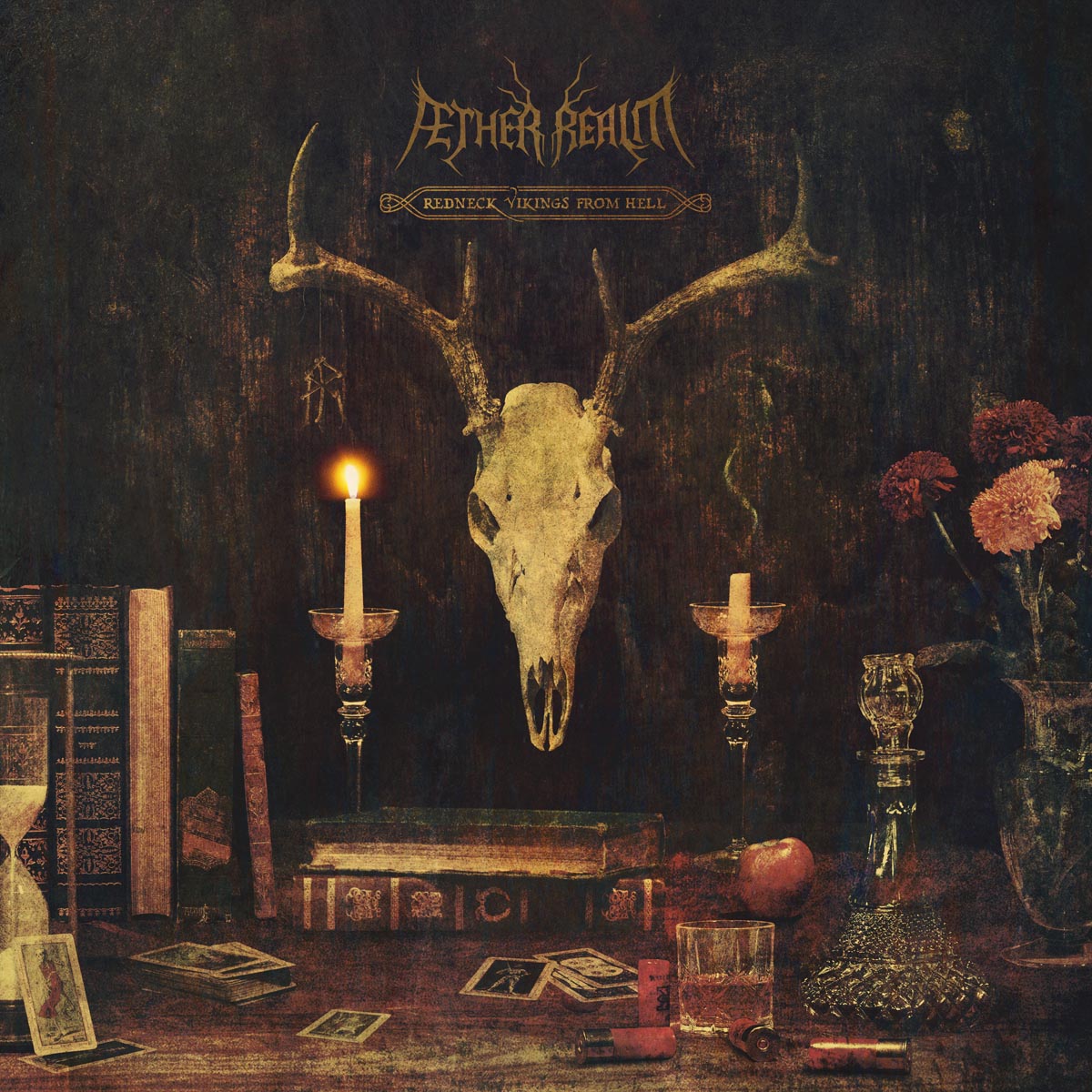 Stylistic variation accompanies a widely varied scope of pacing, with the calm waters of “Guardian” wrapping around listeners with a warm embrace while keeping a slow, soothing tempo that allows Jones’ growls to blossom like welcome flames. Each song structure varies in its speed and execution, rarely falling into the simplistic routine that passes from verses to refrains and then back again. Second single “Slave to the Riff” scatters unique instrumental passages between fragmented choruses, infusing moments of flamenco to provide a segue between Burbage’s relentless riffs. The hooks of “Rednight Vikings From Hell” are not relegated to the realm of guitars, including a number of symphonic elements that swell with majesty and grandeur against the backdrop of death metal and heavy percussion.

The biggest leap that Aether Realm has experienced is a drastic increase in the production quality between “Tarot” and “Redneck Vikings From Hell.” As cohesive and unified as “Tarot” stood, there was a raw, home-brewed edge to the production which muddied some of the more nuanced moments, suffocating strings beneath a sea of percussion. Already crisp screams come across with increased clarity, and Jones’ bass achieves equal standing in a carefully layered mix. It is a final product which places equal importance on both the lead and rhythm guitar, a careful component in crafting the impactful choruses of “Hunger” and “One Hollow Word.” However, aside from dependable musicianship, little ties the tracks from “Redneck Vikings From Hell” together, the wandering of the tracks sometimes aimless, and symphonic components pique and fade without ever hitting the cinematic heights accomplished in their prior works. Personality still shines through, but less comprehensively across the album as much as it does within each song.

“Redneck Vikings From Hell” has no care for convention and offers not an ounce of compromise. The album proceeds as though each member of Aether Realm were impervious to criticism, stuffed with the aggression of death metal and unabashed eclectic style that will certainly draw critics to their shores. But Aether Realm have proven themselves creative and unabashed, using melodic death metal to fiercely sing the word “love” without a hint of shame in the same breath they cheer on their party-loving redneck viking compatriots. This is no “Tarot,” but it was never meant to be. Without question Aether Realm have shown themselves to be incredibly human, baring their souls full of love and sorrows, with these numerous dimensions manifesting in an album that knows no boundaries. Whether looking for laughter, a tender embrace, or a song to headbang to at your next party, “Redneck Vikings From Hell” has it all and then some more.

This year’s wildest metal anthems aren’t arriving by dragonship, but in the bed of a lifted pickup truck with shotguns still in the rack. An eclectic diversification of genres and sounds have proven Aether Realm are the essence of unrestrained creativity, with “Redneck Vikings From Hell” stuffed full of irresistible riffs alongside countless stylistic surprises straight from the American south.