This past July 19, Radioactive/MCA/UMe  commemorated the 25th anniversary of LIVE’s seminal sophomore album Throwing Copper with a deluxe multi-format reissue. The Super Deluxe 25th Anniversary Throwing Copper box set edition not only features the album with bonus tracks on 2LP black vinyl, and a 12-page booklet with an in-depth interview with the band chronicling the era of the album, but it also contains 2CDs with a 26-track lineup that includes LIVE’s previously unreleased, explosive eight-song performance at Woodstock ’94 on a separate disc. The 25th anniversary Throwing Copper collection is also available in a deluxe digital version, as well as a standalone 1CD set as well. The video from one of the release bonus track “Susquehanna” can be seen below.

Initially released on April 26, 1994, Throwing Copper cemented LIVE’s position as one of the most instrumentally powerful and lyrically impactful bands of the modern alternative-rock era. Throwing Copper, which topped the Billboard 200 Albums chart a year after its initial release, also features a pair of No. 1 Modern Rock singles (“Lightning Crashes,” “Selling The Drama”) and has since been certified 8x multi-platinum by the RIAA, having sold over 8 million copies.

Produced by Jerry Harrison (Talking Heads) and recorded at Pachyderm Recording Studios in Cannon Falls, Minnesota, Throwing Copper built upon the earnest sonic template the tight-knit four-piece band from York, Pennsylvania established with their compelling 1991 debut album, Mental Jewelry. From the anthemic manifesto of “Selling the Drama” to the fervent declaration of “I Alone” to the unrelenting charge of “All Over You” to the emotional-rollercoaster journey of the epic “Lightning Crashes,” Throwing Copper handily reinforced LIVE’s drive to connect with their ever-expanding audience in as many ways as possible. 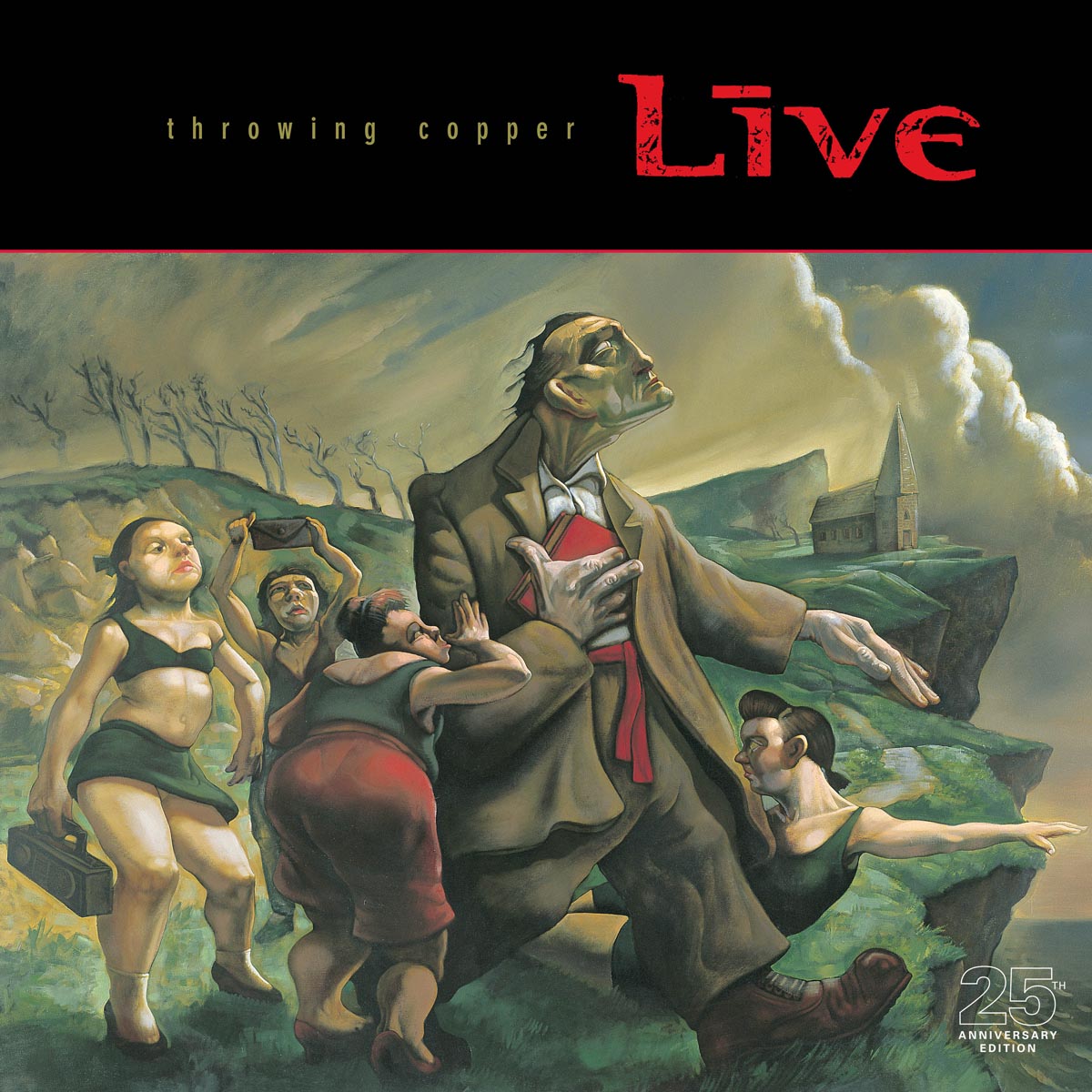 “Throwing Copper is big songs, big feelings, big dynamics,” observes vocalist Ed Kowalczyk. “It was us taking the cart and throwing it way ahead of the horse, and we hoped the horse would eventually catch up. We had a ‘let’s build it and hope they come’ attitude.” Adds bassist Patrick Dahlheimer, “While touring for Mental Jewelry, the rooms were getting bigger, and I wanted our new music to fill those places and beyond. With Throwing Copper, I just knew it had to be more grand.”

From there, LIVE was on a clear roll, having scored a key slot at Woodstock ’94 on August 12, 1994, in addition to logging their first appearance on Saturday Night Live on January 21, 1995, and subsequently laying down an intimate nine-song set for MTV Unplugged on February 15, 1995 — all key signposts along the way for Throwing Copper’s ultimate ascent to the top of the Billboard albums chart on May 6, 1995. “When you listen to it now,” guitarist Chad Taylor says of their notable Woodstock ’94 appearance, “the crowd is so loud, they literally overcome the sound of the band at times. It’s magical! As I was mixing the audio for this re-release, it was giving me chills. Because I realized it was the band is in its primal infancy — the true birth of LIVE.”

Without a doubt, “Lightning Crashes” is the galvanizing force of nature that took both LIVE and Throwing Copper into the next stratosphere. “Everyone in the band felt ‘Lightning Crashes’ could be a big single,” admits drummer Chad Gracey. “That was based on, one, the greatness of the song, but also, two, the way bands at that time would build to their album’s big ballad. We thought if we could get two singles out and then ‘Lightning Crashes,’ it could be successful and huge.”

To celebrate the anniversary LIVE and BUSH are joining forces for The ALT-IMATE Tour, a high-powered co-headline summer run that will see these two iconic acts celebrating the 25th anniversary of  Throwing Copper and Sixteen Stone. 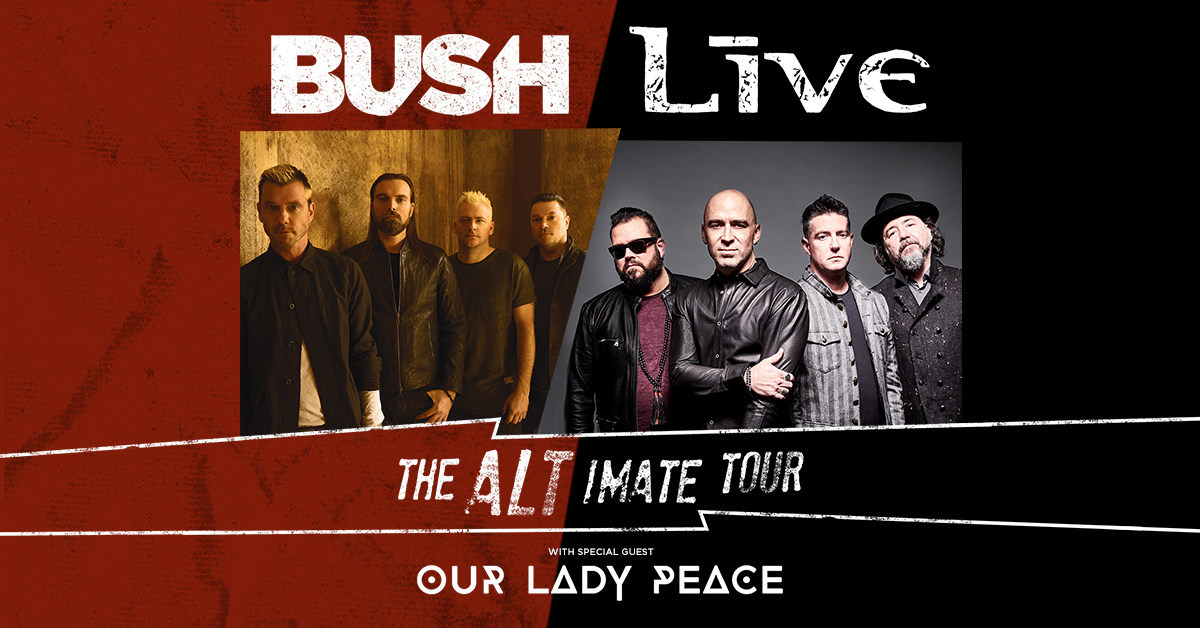 “We are thrilled to be touring this summer with LIVE,” says BUSH front-man Gavin Rossdale. “The wealth and depth of songs from both bands should provide a great night of music. Looking forward to seeing you all this summer.”

“Bush is a great band and Gavin is a super passionate singer and performer.  I’m really looking forward to spending the summer with them,” said  LIVE frontman Ed Kowalczyk. “I know the fans are going to get one hell of a show. It’s an amazing feeling to know that these songs still resonate so profoundly with people. And I still totally get off on celebrating this music with them. With Throwing Copper, we were taking on big things with a big sound.  Love, truth, birth, death, philosophy, religion, spirituality…we were asking the perennial questions and poking around for answers with this massive and dynamic sound. It attracted people from all over the world. We were inviting them to imagine that rock and roll could be a valid forum for exploring these types of things…we built it and they came.”

The remaining tour dates can be seen below: