Australian electro prog sensation VOYAGER has announced an online concert! The show, which was filmed in the band’s hometown of Perth (AUS), will be streaming via the Veeps Platform on October 11, 2020 at 7:00 A.M. EDT and will exist until November 1. The set can be viewed at THIS LOCATION. Tickets are available now!

The show, dubbed “Voyager Biosecurity (Human Biosecurity Emergency) (Human Coronavirus with Pandemic Potential) (Overseas Travel Ban Emergency Requirements)Determination (Cth) Online Show 2020,” has been named after the legislation that was passed in Australia that is preventing the band from touring. It will take place at the “Department of Prog, Synths and Riffs.”

The absence of live shows in 2020 has affected music fans all around the world. VOYAGER is here to inject some of the live music spirit back into your lives.

Vocalist Danny Estrin’s official announcement and comment can be seen below.

Moreover, Guitarist Scott Kay teaches fans how to play a riff from the band’s song “Colours” in the latest installment of Guitar World’s “Sick Riffs” series! In addition to the play-through, Kay also includes the tablature. Watch and learn at THIS LOCATION.

The song is taken from the band’s 2019 release, ‘Colours in the Sun,’ which can be downloaded and streamed HERE. 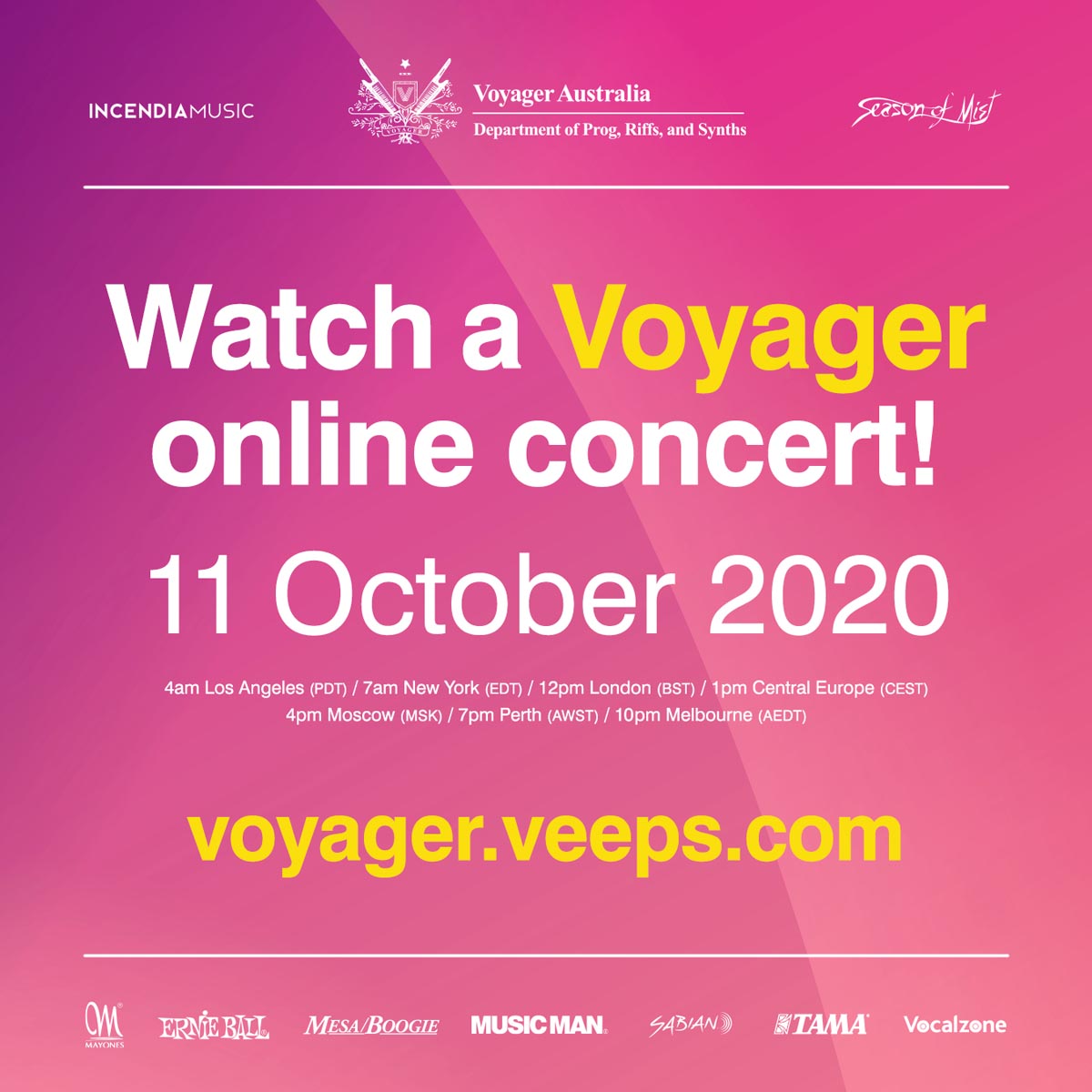 Moreover, the band has reissued 2017’s ‘Ghost Mile‘ as a digipak version, which contains three bonus tracks which were recorded during the VOYAGER show at ProgPower in 2017. It can be ordered HERE.

Earlier this year, VOYAGER‘s music video for “Runaway” was exclusively premiered via ‘Eurovision – Australia Decides!‘ Following an application via the Song Portal, the band finally received recognition for submitting a track and were paid tribute on the live television broadcast that aired on Saturday, February 8 on the Gold Coast. The video is now available worldwide and can be seen at THIS LOCATION.

Since their 1999 formation, whatever genre norms, boundaries and regulations thrust upon Perth, Australia’s Voyager have been smashed. They embrace, if not brandish pop; employ a keytar on stage, and, bring forward a positive, if not uplifting feeling to their music, running head-first into the endless parade of heavy bands who see the world in a different light. It’s perhaps why the title of their seventh full-length and first for Season of Mist, “Colours in the Sun,” is apropos: Voyager simply prefers to see the bright side of things.

“Observations of the malaises of the modern world and the baffling obsession with purity and difference all make me think,” says frontman and founding member Danny Estrin. “We’ve never had it better and we’ve never had it more colorful. To me that’s progress, it’s adaptation, it’s evolution and it’s astounding.”

The follow-up to 2017’s “Ghost Mile,” “Colours in the Sun” finds Voyager enmeshed in rich, melodic, song-first tapestries, led by Estrin’s smooth, capable clean vocal delivery. Estrin is self-aware of his vocals, calling them “unique and ‘80s.” But whatever tag Estrin affixes to his voice, they are the propellent throughout “Colours in the Sun,” serving up a steady diet of soaring, emotive choruses, where melody is paramount and along the way, even getting some help from another distinctive belter, Leprous’s Einar Solberg on “Entropy.”

“Einar and I became good friends on our tours through Europe and Australia,” notes Estrin. “I couldn’t help but ask him to guest on the album. He is a fantastic musician and vocalist. I sent him a reference track which he swiftly ignored and laid his own tracks down. The result is stunning!”

The kaleidoscope of sounds that comprise the album’s ten cuts is the result of Voyager’s far-reaching influences, many of which go beyond the traditional realms of metal and rock. Estrin calls it “catchy at the top, proggy at the bottom, as if Dream Theater and Depeche Mode had a baby.” It’s almost as if the term “progressive” is too limiting for Voyager, particularly when the guitar tandem of Simone Dow and Scott Kay merge for complex rhythms while doing battle against Estrin’s vaudeville-like keyboards (!) on “Reconnected.”

The “proggy at the bottom” notice is served by way of the rhythm section of bassist Alex Canion and drummer Ashley Doodkorte, who stretch their musical tentacles across busy, active cuts such as “Saccharine Dream” and the syncopated “Water Over the Bridge.” “I think we found our ‘voice’ on V (2014) and have been building on that ever since,” says Estrin. “The synthwave prog sound is really something that has naturally developed and has been refined even more on the new album. Every record is progress — that’s what progressive music is all about!”

According to Estrin, the “Colours in the Sun“ album title encompasses a “vibrant multitude of people coming together under the hot Australian sun to create a beautiful and colorful soundscape.” It’s capped off by artwork courtesy of Doodkorte, who made the piece out of photographs near his house in Perth. A closer inspection reveals there are seven suns on the cover, one for each Voyager album, topped off by an updated version of the band’s logo comprised of five strokes, one for each member. No doubt a fitting visual summation of a band whose progress can be the described in the most literal and figurative of terms.

“It’s been a slow steady growth over the years,” concludes Estrin. “Other bands come and go after a year of fame. I really feel like we’ve built up an incredible fanbase, especially over the last decade, and the deal with Season of Mist seemed the logical step to take it to the next level together.”