3 DOORS DOWN is celebrating the 20th anniversary of its multi-platinum debut album “The Better Life” with three opportunities to watch the band members from the safety and comfort of your living room performing live from Nashville, Tennessee. The series kicks off February 5 and will feature the band playing their debut album in its entirety for the first time plus three never-before-heard songs from their vault. The February 19 show will feature “Greatest Hits Acoustic”, and March 5 “Greatest Hits Live & Electric”.

The “3 X LIVE” pay-per-view series will be streamed and ticketed by Mandolin. Individual show tickets are $20, and the three-show bundle is $50. The band will be offering limited and exclusive merchandise packages, including show t-shirts, exclusive posters, and more available during each show. All shows will be available to stream on-demand for 48 hours from the original date and time. For more information or to purchase tickets click here.

3 DOORS DOWN front-man and celebrated songwriter Brad Arnold shares: “I think we can all safely say 2020 is a year we all want to get behind us. We jumped when presented with the opportunity to kick-off 2021 with these PPV shows. As a band, we didn’t get to play together last year, so we’re looking forward to rocking these shows for our fans across the world and looking forward to hitting the road later in 2021.” 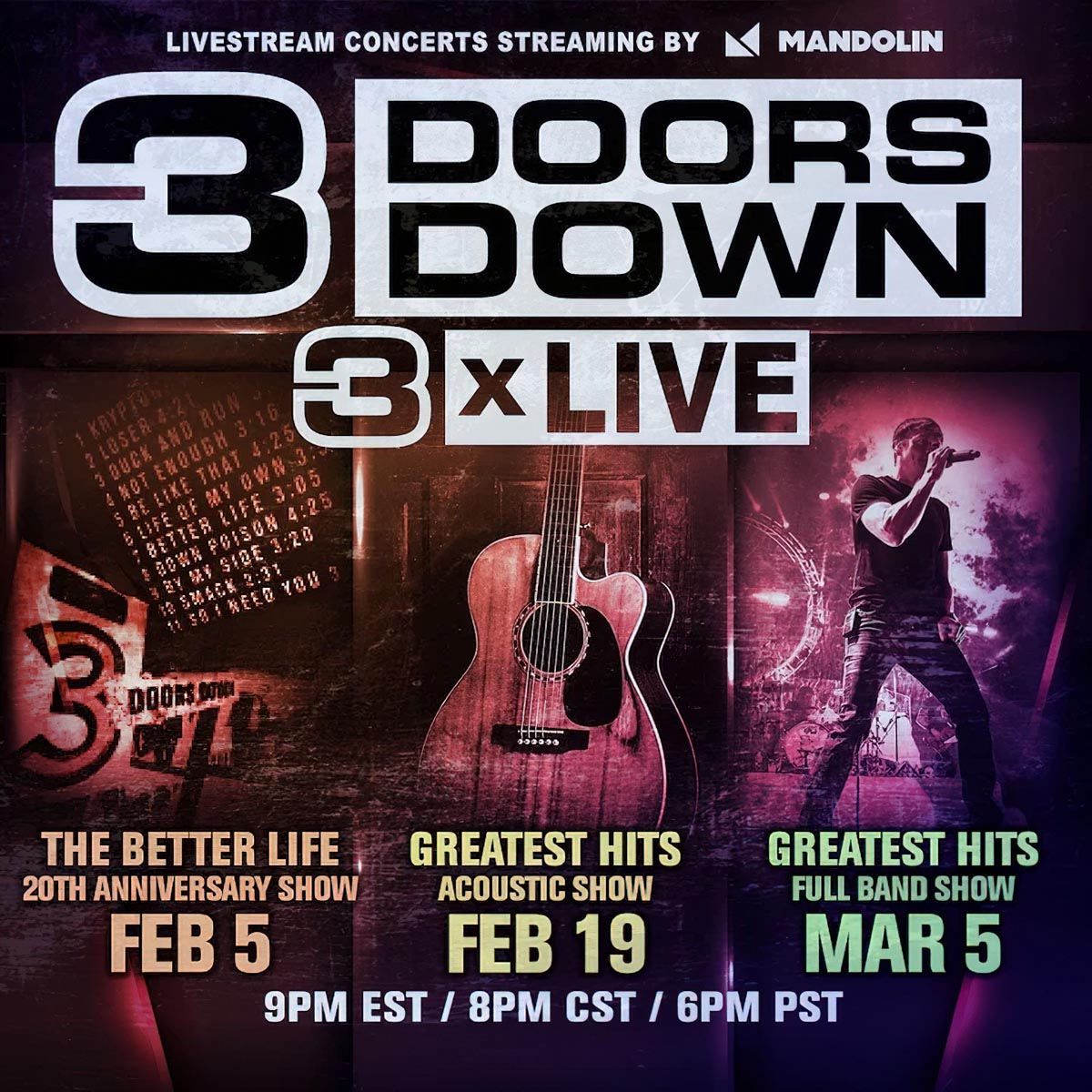 3 DOORS DOWN‘s sixth full-length album, “Us And The Night”, came out in March 2016 via Republic Records.

The band’s manager, Angus Vail, told Vice that 3 DOORS DOWN played the event because they are conservatives.

“They come from conservative families,” Vail explained. “When Obama got elected, the singer [Brad] said, ‘Please don’t talk to my father about Obama because he thinks the world has ended.’ He was just as horrified and depressed about Obama as many are about Trump. They were, like, ‘It’s going to be Armageddon, the whole world is going to communism and he’s going to give everything away to the welfare state.'”

Asked what 3 DOORS DOWN‘s political beliefs are, Vail said: “3 DOORS have that ‘God, guns, and country’ black-and-white sort of viewpoint, and they spend a lot of time going to Iraq, doing service, playing for the troops. They believe it, and that’s just the way they see America. It’s pretty hard to argue with. You say, ‘What about the nuances, what about the gray areas?’ and they say, ‘No, no, God, guns, America is the greatest country on earth.’ They stick to that viewpoint.“